Within a fortnight of walking one of his two beloved daughters down the aisle on her wedding day, Eddy Kirby was suddenly taken ill and after tests he was diagnosed with an aggressive glioblastoma multiforme (GBM) brain tumour. It was inoperable and although he underwent treatment, Eddy’s condition deteriorated rapidly. He passed away, aged 64, on 7th March 2015, his late father’s birthday. In addition to leaving two daughters, Emma and Sarah, Eddy also left a partner Carol and his mother, Marjorie, aged 93.

His daughter Emma tells his story …

My dad was 64 and commuting every day from his home in Brighton to work in London. He was a project manager for Transport for London and would take the train into London Victoria every day. Dad was so loving, and caring - one of life’s true gentlemen. He lived for his girls, and he will live on forever in all of us.

We had a wonderful day when my sister Sarah got married back in November 2014, and dad walked her down the aisle like the proudest father in the world. But then just two weeks later and completely out of the blue he was taken ill and shortly after that diagnosed with an aggressive glioblastoma multiforme (GBM) brain tumour.

To start with he complained that he didn’t feel like himself and that he felt a numbness on one side of his body. He went to hospital for tests and, at first, it was thought he’d had a stroke, and that was the worst possible outcome we considered.

Within a week he went for a scan and, when the results came through, the doctor came to discuss them and said: “I’m really sorry, do you want to go somewhere else?” He said: “No, just tell me.” Then he was told he had a brain tumour. We had no idea anything like that was even an option. His partner Carol and I were at his side when the news was broken and I called my sister Sarah immediately.

Further tests and a biopsy followed the same week to determine the severity of the tumour. Then, just before Christmas Eve, we were told the devastating news that his tumour was very aggressive and completely inoperable. Dad and Carol had gone back in to discuss the results with the doctor to see where to go from here and then called Sarah and I. Carol was in total disbelief and couldn’t accept that it was inoperable. That’s when our whole world turned upside down. We were absolutely devastated that this could happen to our amazing dad and still, to this day, can’t believe it.

The doctors suggested a course of radiotherapy and chemotherapy to try and manage the symptoms and shrink the tumour, hoping to give dad more time. At this stage we were lead to believe dad could have anytime between one year and 15!

He started course of radiotherapy at the Royal Sussex County Hospital in Brighton but he started to get very weak very quickly, so much so that the chemotherapy couldn’t even begin, because he wasn’t strong enough to take it.

The radiotherapy lasted for six weeks and, while he was OK when it started, his condition deteriorated rapidly. Things progressed very quickly from here on. He was in a wheelchair within weeks, completely losing the use of his left side and the ability to do things for himself. We all tried to stay positive, as hard as it was seeing him deteriorate so quickly every day. We were rarely very serious with dad, always having fun and a laugh, so we tried to keep spirits up for as long as we could.

Carol decided to give up work to care for him full time. Sarah and I tried to stay with them at least a couple of times a week so we could help with the trips to the hospital for radiotherapy, and so that Carol could try to get some sleep. By this time dad had completely lost the ability to do anything for himself. He cried a lot and I don’t think he actually slept for more than a few disturbed hours in six weeks.

We managed to care for dad and keep him at home until his final week when he went into the Martlets Hospice in Hove.

Initially, we had discussed that he would be there for two weeks’ respite care but, sadly, we lost our lovely daddy within a week. The care he received at the hospice was absolutely amazing and we couldn’t have asked for a better place for him to spend his final days, and what was more comforting – he liked it there, and found it peaceful. The nurses were wonderful and such a massive support to the whole family.

The whole situation was heart-breaking, particularly to see how devastated dad was about his condition. We had tried to take him out as much as we could but it was very difficult. He liked to go to the little coffee shop near his home in Hove, or to the M&S cafe nearby for lunch. I will never forget the last time I managed to take him there alone. We finally sat down to eat after battling through the crowds in his chair and he just smiled at me. Then he kept lifting his hand to his head as he complained of a headache. He just broke down in tears and said: “I’m going to die soon Em’s, I want to go home”. A very kind lady next to us heard everything and offered all she could, a couple of paracetamol.

I would never wish what happened to my dad on anybody. It’s a horrible, cruel disease and I pray that nobody else suffers like he did.

Back in January, Sarah and I decided we had to do something to keep ourselves busy, and try to help dad and others, so along with our friends we signed up to the BUPA 10K race in London in May 2015 to raise funds for Brain Tumour Research. Dad was so proud of us and was going to be there at the finishing line waiting.

In a way we were lucky that, in the last few months, we got to tell him each day that we loved him. Fortunately, if there is a fortunately in this situation, this nasty disease gave us some short and precious time together. Dad loved his Dutch barge and we talked about how he would spend time on it when he recovered. He also talked about one day flying a spitfire – one of his lifelong ambitions. Along with going on another cruise with his darling Carol.

A little piece of my heart broke every time he said he was frightened or scared and I would have done anything to take that fear away. Imagine knowing you are going to die and there is absolutely nothing you can do about it?? Leaving your girls behind when you want to do nothing but to be here with them enjoying life…

The nurses told him that when the time came he wouldn’t feel any pain and one day he would just fall asleep. So our darling daddy fought with all he had to stay awake, but sadly he lost his battle and passed away peacefully on his late father Edwin’s birthday, with his girls at his side.

Dad, Sarah and I were so close, we didn’t just have a ‘father-daughter’ relationship, we were best friends too. I’ll miss and love him every day for the rest of my life. I’ll miss calling him with excitement to tell him my latest news, big or small. He used to laugh out loud with utter pride and tell me how “magic” it was.

We hope that our fundraising for Brain Tumour Research will help to find a cure for brain tumours and will stop other families from enduring the pain we have suffered and continue to feel. Eddy Kirby was too dearly loved to ever be forgotten.

Eddy was an only child and leaves behind his mum Marjorie who is 93, his loving partner Carol, and two daughters – Sarah 29, and Emma 26. 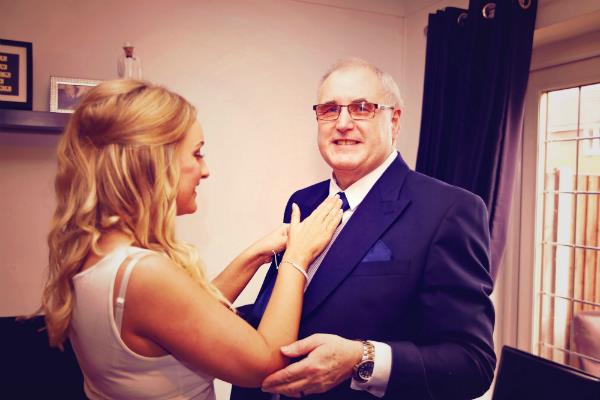