We are grateful to Duncan who worked with us in October 2019 to share his story here. Sadly, he passed away on 6th April 2021. We remember Duncan as we continue our work to raise awareness of this devastating disease and to fund research to help find a cure. He will be forever in our hearts.

Kent-based radio producer Duncan Wallace, originally from Newcastle-upon-Tyne, is happily married with two young children, a great circle of friends and a successful and exciting career in the music industry. But life was turned upside down for Duncan in April 2019 when he was diagnosed with an inoperable, high-grade brain tumour. Having undergone a course of radiotherapy and chemotherapy, Duncan remains positive in spite of his prognosis and recently completed the Great North Run, raising an incredible £22,000 for Brain Tumour Research.

I got approached to be part of Apple Music’s Beats 1 radio station four years ago, when it was launching, and have never looked back since. I am very lucky to work with a variety of amazing artists including Elton John, creating radio shows with them which air around the World on Beats 1 / Apple Music.  It never crossed my mind that I’d be receiving treatment for a brain tumour at University College London Hospital (UCLH) on Euston Road, just down the road from my offices in King’s Cross. 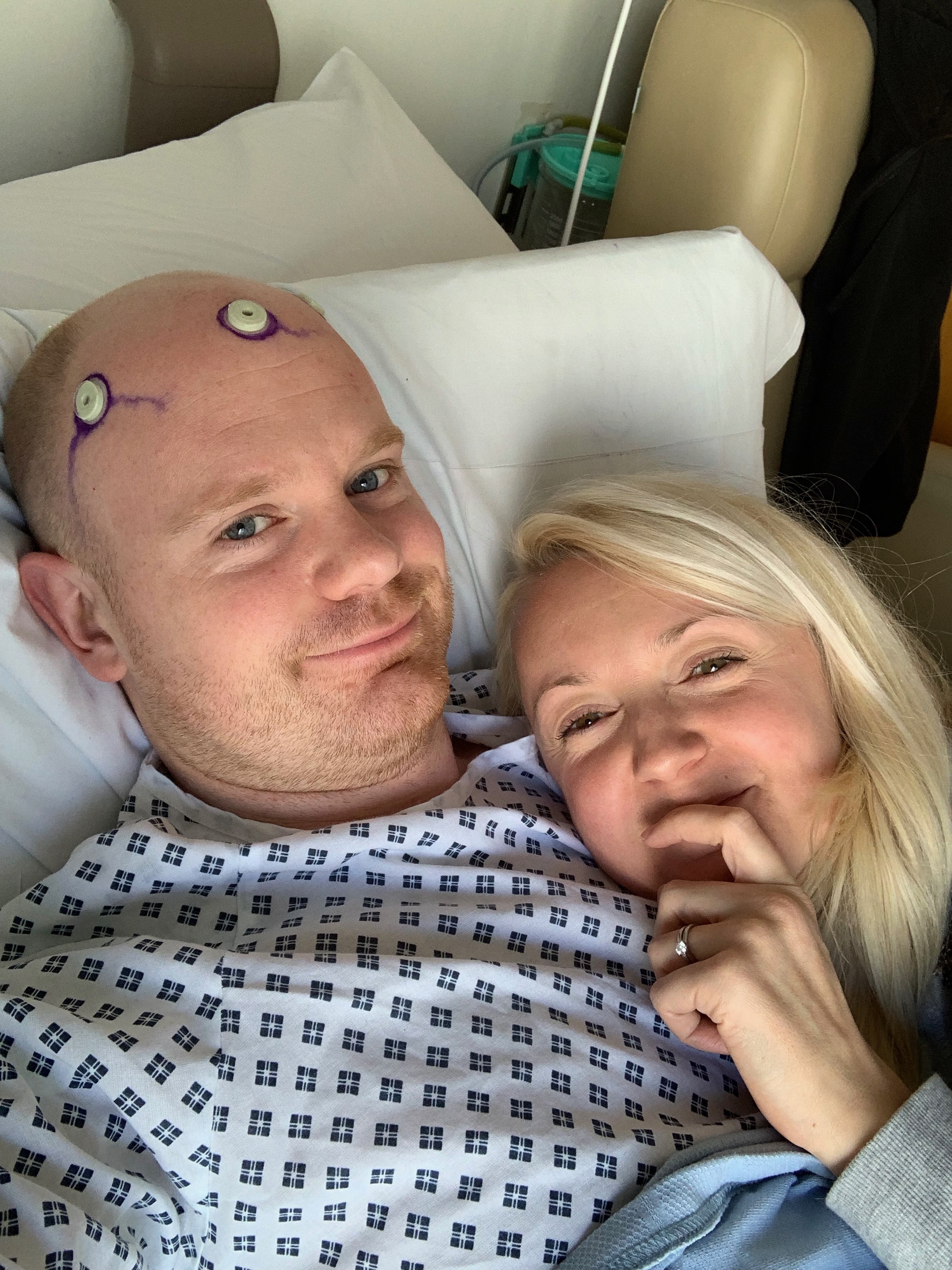 I got my news at the start of April. I went to my GP after I’d been suffering from migraines. I didn’t think for one minute that it might be anything serious. I was referred to a neurologist, who suggested the symptoms may have been down to stress and poor diet but he sent me for an MRI scan, as a precaution. Things then moved very quickly when I got a call a few hours after the scan letting me know that they’d found a brain tumour and that they planned to operate within the next 48 hours. I was at work when I received the call and I didn’t really know what it all meant or how I was supposed to react.

“The guy on the phone said they wouldn’t normally deliver news in this way but that he’d called because it was so urgent.”

After the call I thought to myself, ‘did he really just say that?’. I questioned everything as I attempted to digest the news. I went home and told my wife Katie, who was shocked and scared. I then had to phone my parents in Newcastle to tell them the news. My parents travelled down the following day to be with us. Twenty-four hours later we went into hospital to see a specialist. He sat us down and told us that it was a large, serious tumour. They didn’t know at that stage if it was cancerous. Because of its location, deep in my brain, they knew early on that it would be impossible to remove the tumour. It was causing pressure on my brain, so what they could do was perform neurosurgery to insert a ventriculoperitoneal (VP) shunt, to drain the excess fluid. It was another agonising wait, this time three days, until I was back in for the surgery. The scariest thing was that they told me someone had to be with me at all times, as there was a strong chance I would collapse. 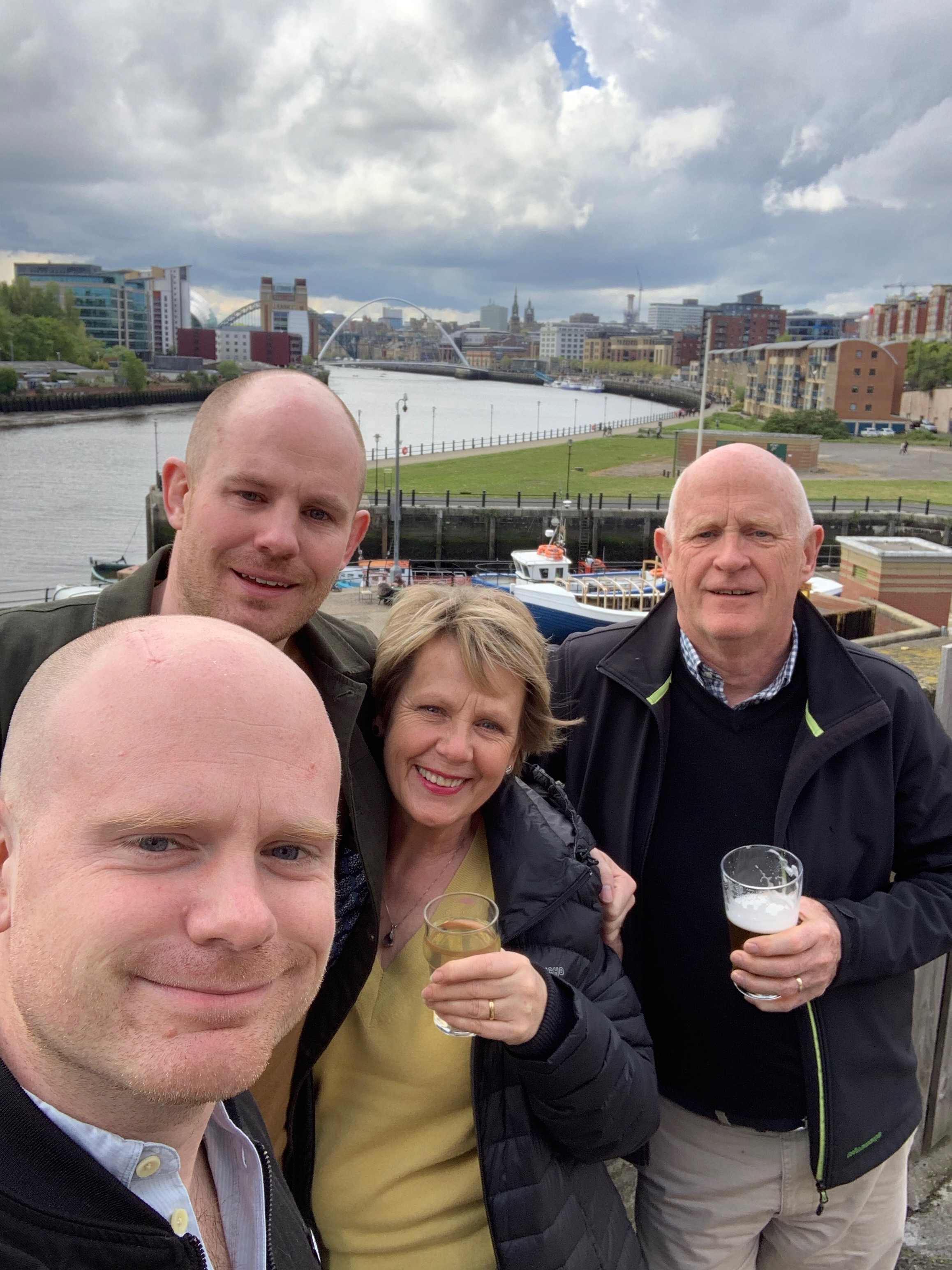 “I couldn’t understand it; other than the headaches and some issues with my vision, I had no symptoms to speak of and I was feeling fit and well.”

I had surgery to fit the shunt at the National Hospital for Neurology and Neurosurgery at UCLH. I’ve been told by a number of people that this is one of the best places in the country to have this type of treatment and so I felt in very safe hands. I was also relieved that my headaches had led me to raise the alarm in the nick of time. Knowing that I’d sought help early on was of great comfort to me. I was fairly relaxed going into surgery; I think it was more worrying for my family. The operation involved making an incision in my stomach, to insert a tube to drain the fluid down from my brain. Afterwards, I felt OK. I was shocked that the pain in my stomach was worse and more debilitating than the pain in my head. My children, five-year-old Finn and three-year-old Izzy, were too young to understand what was going on but I think they were a bit scared to see me come home with a big bandage on my head and on my tummy.

“We’re still not sure what we tell the kids about my illness. For now, we’ve told them that I’ve got a ‘poorly head’ and the doctors are trying to make it better but we haven’t delved into it any further. I just don’t want to scare them.”

A couple of days later I saw the surgeon again and was told that it had been a success. Two weeks later I went under the knife again for my biopsy. They went in through the front of my head this time and again I felt fine afterwards, all things considered. I went home to recover and then had a two-week wait for the results. It was horrible; I hated it. We had this hope that it wouldn’t be aggressive, that it would be low-grade. I didn’t want to google anything. My wife did some research online and all it did was scare her because it was just worst-case scenarios.

On the day of the biopsy results we went in and immediately I knew it was bad news. My surgeon has always been very straight-talking and honest; I really appreciated that. My wife and both my parents were with me and it was horrible. He explained that I had an aggressive, high-grade glioblastoma tumour and that it was inoperable and incurable. It was tough to hear. I recorded the meeting on my phone and when I listen back now it still knocks me for six. I asked lots of questions but didn’t get any answers that I liked.

“I struggled to understand the concept that nothing could be done to save me but that chemotherapy and radiotherapy were possible treatment options. It seemed like a contradiction in terms. Eventually, it was explained to me that it was about extending my life and I was OK with that.”

I have now completed a six-week course of radiotherapy and chemotherapy and luckily my body has coped really well with it. I had a rough first weekend on the treatment and spent Friday afternoon until Monday morning in bed feeling sick and drowsy; I was completely wiped out. That really shook my wife because she thought I was dying. Physically, I now feel pretty good. Other than having to have a few more early nights due to the tiredness, I’m doing alright. I haven’t felt sick at all. I feel guilty saying it but I’ve enjoyed the radiotherapy treatment. It’s not the most comfortable thing in the world having your head pinned to a board but it doesn’t hurt. It benefits me psychologically knowing I’m doing something every day towards treating my illness. There’s a hell of lot of people going through a hell of a lot worse than me. 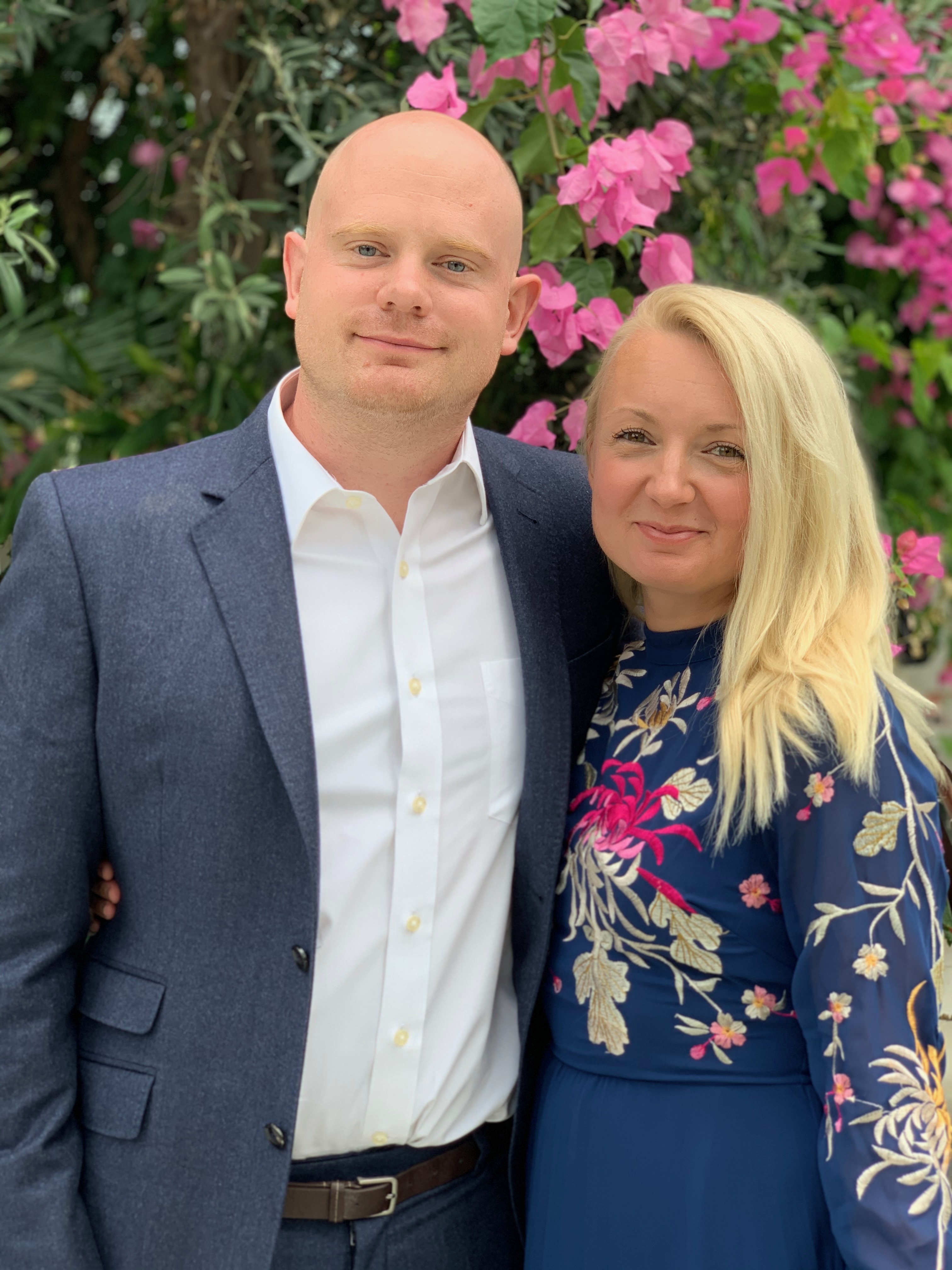 I’m trying to make the most of every day while I’m fortunate enough to be feeling well, as I’m conscious that could change overnight. I try to live life to the full and make the most of the time I have left. I’m catching up with friends more than I did previously, I’m spending time with my kids. I’ve even signed up to do the Great North Run to raise money for Brain Tumour Research. I did it for the first time with my brother in 2008, when I was living up in Newcastle; it was amazing. Being from Newcastle, I grew up going to the start line every year and watching my dad run it. I ran it again last year on my own. The race is a personal one for me. My wife, on the other hand, is not a runner and has never done anything like that before but one day out of the blue she said to me that she’d signed up to do it! I was really inspired and impressed by her so I quickly followed suit and signed up as well. I asked my doctor whether I’d be able to do it. He basically said, ‘I think you’re a bit of an idiot but yeah, go for it!’.

Once I got diagnosed with the tumour, I unconsciously became less active. Previously I would walk to and from the station as part of my daily commute and would clock up around 11,000 steps a day. After my diagnosis that reduced to around 2,500 steps a day so I felt my fitness dropping and I was putting on weight. Focussing on doing the run has made me address this by upping my physical activity. I’ve been seeing a Macmillan counsellor during my treatment and they highly recommend exercise and fresh air to improve mental health. The counselling sessions have been invaluable. Some of them I have on my own and some I have with my wife.

“I personally feel that this is harder for my family than it is for me. My wife is potentially going to be a widow with two young kids before she reaches the age of forty.”

She can’t do anything about it whereas I can try and fight this. Everyone always asks how I am but they don’t always ask how she is doing and so the counselling has really benefitted her. The running helped her too as it gave her something to focus on, especially as she took her training really seriously. 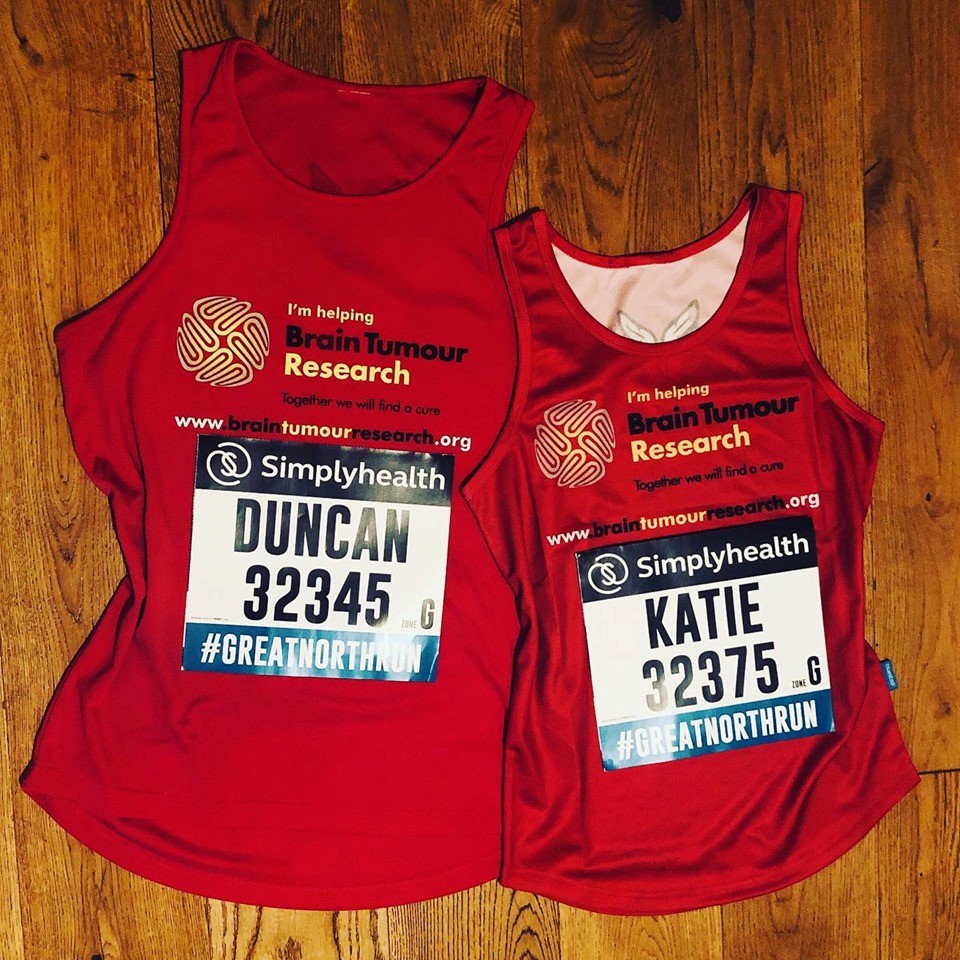 I went back to work after I finished my radiotherapy, to try and get back to a bit of normality. For the first couple of months I struggled to talk openly to people about what I was going through. Gradually I became more at peace with it and would pop into work when I was off, just to see people and check in. I don’t like being out of the loop!

“Life has taken on an entirely different pace but I’ve also been forced to re-evaluate things, which is positive. I’ve always been a workaholic but this has made me realise that, although I miss it and want to go back at some point, work isn’t my priority.”

I couldn’t have asked for more supportive employers. They text me to see how I’m getting on but have told me not to rush back until I feel well enough. Elton has been checking in with me to see how I am, he’s sent flowers and has been so kind and compassionate. In May he invited me and Katie to the UK premiere of Rocketman in Leicester Square. It was such a lovely thing to do; it was exactly what we needed. I can’t explain how special it was to have a night out together as a couple. 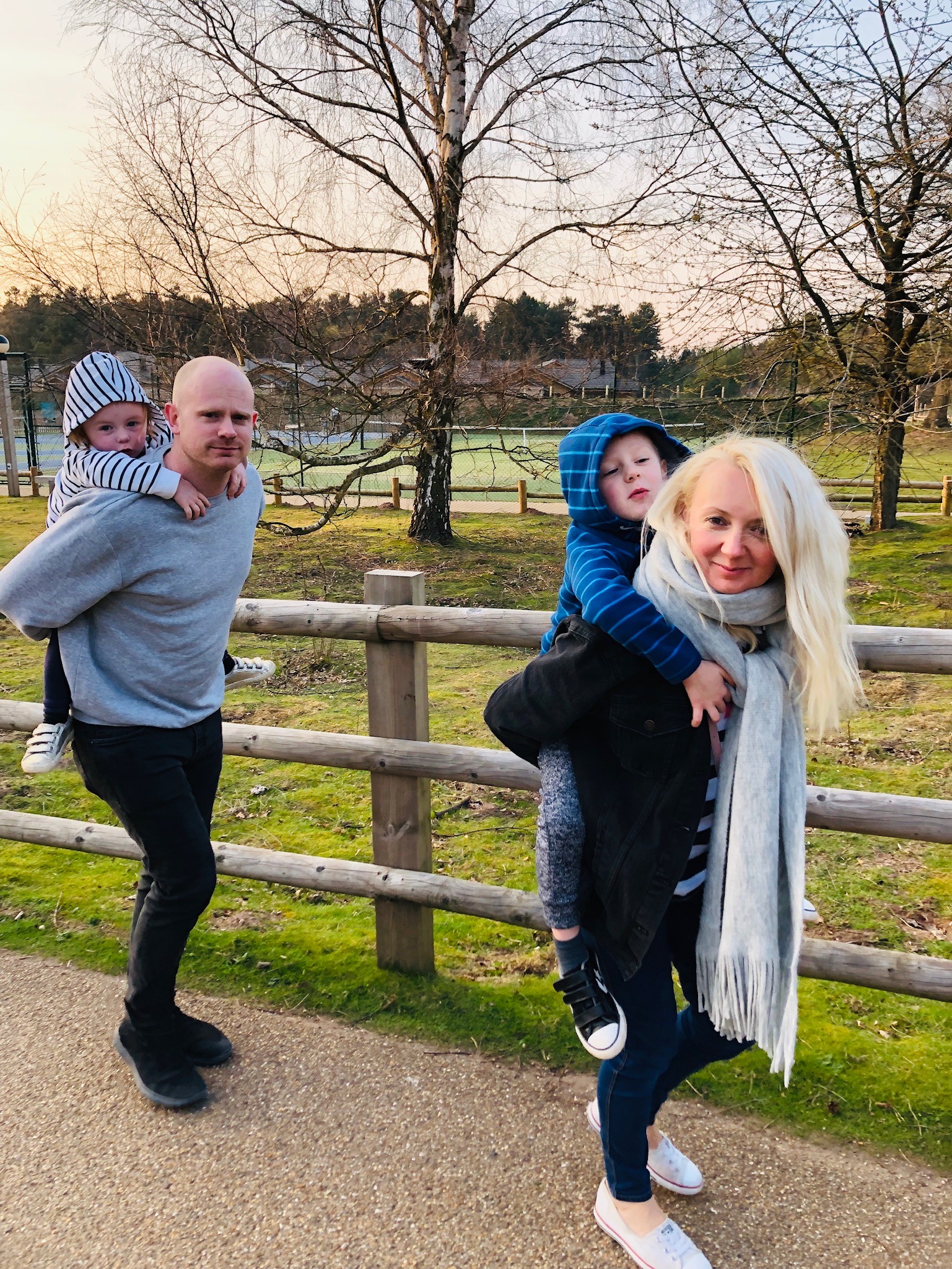 My most recent scan, at the end of September, showed the tumour had grown. Receiving that bad news was obviously a huge blow but I’m continuing with treatment and trying to stay positive. I’ve been told not to expect the tumour to shrink but if it remains stable at my next scan, that will be a great result. I’m aware, however, that I went into my biopsy results feeling optimistic and got hit by a sucker punch but we’ll wait and see. 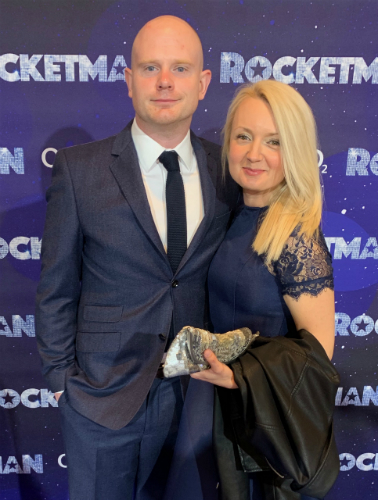