We are grateful to Dixie who worked with us in April 2021 to share his story here. Sadly, he passed away in March 2022 We remember Dixie as we continue our work to raise awareness of this devastating disease and to fund research to help find a cure. He will be forever in our hearts.

Dixie had finally found his true soul-mate when he met Jules on the internet in 2005. They had 14 blissfully happy years together before Dixie was diagnosed with a glioblastoma multiforme brain tumour, grade 4 and given 12 to 18 months to live. Faced with a terminal illness, Dixie turned to poetry to express his deepest feelings and to leave a permanent reminder to his beloved wife, step-daughters and grandchildren.

I met my wife Jules in 2005 on the internet. We started talking and found we had lots in common, including a passion for scooters and going away on scooter rallies, but didn’t actually meet in person for six months. I proposed to her on the day we met and was ecstatic when she said yes!

Although she lived in London and I was in Warwick, I knew we were soul-mates and destined to be together. I knew I had found the person I wanted to grow old with. 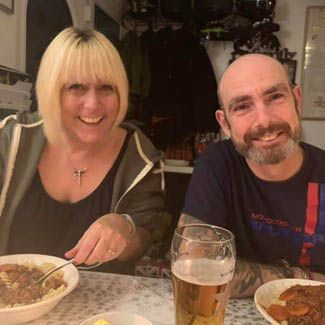 Jules and I married in 2008. I grew to love her daughters Sophie and Lucy, who were 10 and 19 respectively when we met, and now consider them to be my own children. In 2012, we moved into a new family home in Bletchley, Milton Keynes.

Jules and I continued our passion for scooters together and would go to around 20 weekend rallies each year, sometimes as far away as Scotland. It’s a great scene to be a part of because everyone involved in the scooter world is part of the same big family. We also enjoy the music associated with scootering, including northern soul, reggae, punk and ska music, although we’re not fans of the Mod culture! 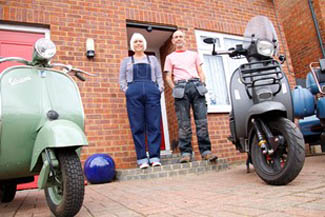 We run our own scooter repair business too, which we are now having to wind down as I am unable to do the repair work.

I was always a pretty healthy guy, happy doing DIY and even climbing up on roofs to do repairs, but in 2019 I was thought to have suffered a transient ischaemic attack (TIA) or mini stroke. I remember I was sitting having tea when I experienced flashing lights in my left eye and tremors in my left hand. I lost coordination and couldn’t pick anything up. The GP sent me to have a scan at Milton Keynes University Hospital.

Two days later, I had a call from the stroke doctor, asking me to come in.

“He told me they had found a glioblastoma multiforme (GBM) brain tumour and when he added that I should start making plans before it was too late, the significance of the diagnosis started to sink in.”

Two weeks later, I was undergoing neurosurgery in the John Radcliffe Hospital in Oxford. I was told they had removed most of the tumour, although the operation was complicated by tentacles branching out from it. 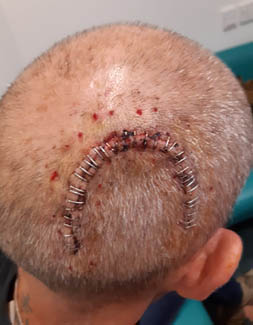 I was given a survival prognosis of 12 to 18 months and told that the tumour would come back.

In the meantime, I had radiotherapy and temozolomide chemotherapy, which made me feel quite anxious and sick.

After my treatment, we started going away again with Jules driving our camper van. Obviously, I wasn’t able to drive anymore, having undergone brain surgery, so we couldn’t go off on our scooters together, although I do ride pillion on the back of Jules’ scooters whenever I can.

“We went to places like Brighton and the West Country to make more memories for Jules to be able to look back on after I’ve gone.”

In early 2021, I had my regular scan and was told they had found a couple more tumours and I underwent surgery within two weeks. In fact, it turned out that there were not two, but four grape-sized tumours.

This time I was told that, without further treatment, I was looking at perhaps six to nine months at most.

I then started further chemotherapy which will be ongoing for six to nine months in the hope that this will stop the cancer spreading further. I am taking things a week at a time and hoping we can start going away again soon, depending on my health.

“I started writing poems for Jules to let her know how I felt about her as it’s not always easy to communicate my feelings and I also really didn’t want her to get upset.”

Then I wrote some more poems about how the cancer affects me day to day, including things I can and cannot do, like riding my scooter, and how it affects me in terms of mood swings. I added further poems about how the cancer affects my family and our lifestyle and dedicated poems to Lucy and Sophie, as well as our grandchildren (Lucy’s children Ella, six and three-year-old Jake) and my dad. 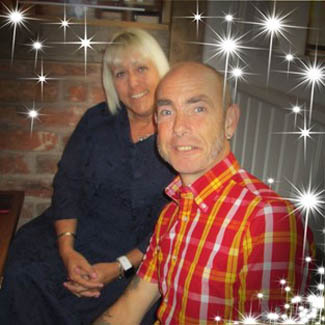 I also penned more general poems about my day-to-day feelings, which hopefully will also benefit other people who can’t or don’t know how to express their emotions, as well as a poem for carers who do get forgotten. Jules, who is now my carer as well as my wife, is going through it as much as me, but people often don’t ask after Jules.

Before I knew it, I had written 50 poems – enough to put together into a book which I have titled My Pensive Moods – and Jules, Lucy and Sophie have each written a poem with their thoughts about the situation and how it has impacted on their lives.

Our good friend and scooterist, Susan Wright, who also lives in Bletchley, set up a Go Fund Me page to help me get my book of poems published. Anything left from the Go Fund Me page, as well as the proceeds from sales of My Pensive Moods, I will be donating to the charity Brain Tumour Research. I want to help because research into brain tumours is massively underfunded and because the charity is local to me, being based in Milton Keynes.

“The least I can do is give something back and I really hope it helps others who are struggling to let their loved ones know their inner-most feelings.” 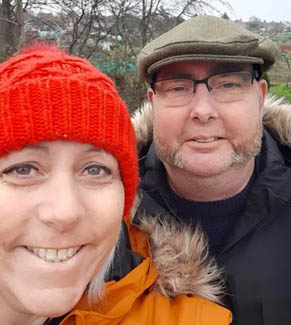 Here are my words from the heart in a poem I have called The Forgotten One. It is dedicated to Jules, but I think it will resonate with lots of people who have become their partner’s carer.

Yes, I have cancer, but it’s not just me,

My wife is suffering just as much, you see.

Probably more so, being my carer,

People ask about me, forget about her.

I have medication to ease the pain

But she’s the one who takes the strain.

She has to deal with my anger and frustration,

My mood swings, my ups and downs.

She deserves a standing ovation.

They forget about Jules, all too quickly.

I owe her so much, she’s why I’m still here,

She’s stood by me through this, despite her fear.

Jules is the one who will lose her soul mate,

She’ll be left behind, not my choice!

We’re here as a couple, always have been,

Not always treated as such, we’ve seen.

See, it’s not just about me, credit where it’s due,

It’s not just me suffering with cancer, she is too!

When Dixie’s book of poems entitled My Pensive Moods is published, details including how to purchase a copy will be shared on www.braintumourresearch.org/recommended-brain-tumour-books 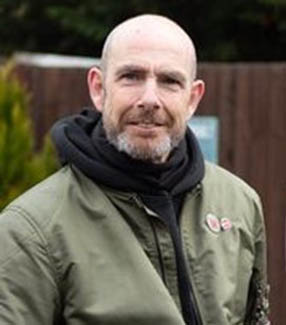