Laura, her partner Kev and daughter Eva, are taking part in a Walk of Hope to help find a cure for the disease which took her Mum, Debbie, at the age of 58. Debbie outlived her prognosis but endured the loss of her only son as she struggled to cope with the physical and mental demands of her own illness. At her Mum’s request, Laura underwent radical surgery because she was genetically predisposed to getting breast cancer and ovarian cancer. The family has been left wondering why treatment options for brain tumours haven’t kept pace with other types of cancer such as those Laura was at risk of.

When Mom told me she had a brain tumour, I dropped the phone. I was just so shocked that, quite literally, it fell out of my hand. The news was as bad as it could be – it was a grade 4 glioblastoma multiforme (GBM) which brings with it the very bleak prognosis of just 12 to 18 months.

Remarkably Mom outlived the statistics. She passed away in May 2019, seven years after we were given the bombshell news. She was 58 and with so much to live for. Looking back, although those years are extremely difficult, I am glad that she had that time because she got to know my daughter Eva, her only grandchild, and her illness meant we spent time together that ordinarily we might not have. 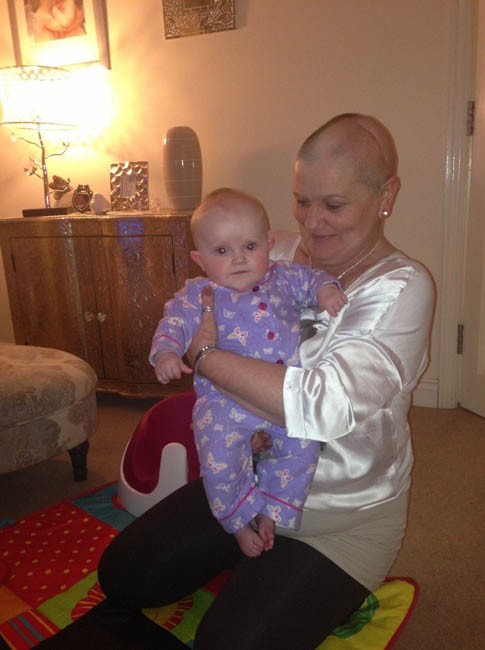 The time she had after her diagnosis was bittersweet though. We watched as this cruel disease stripped her of everything that she was. Having got through surgery initially, her chemotherapy and radiotherapy lasted for the whole of those last seven years of her life. It was gruelling and she was greatly diminished; sometimes it was hard to tell if it was the tumour or the treatment which was causing the worst harm. She had been glamorous, she loved dancing and attending Northern Soul events, and was proud of her appearance but the disease aged her by 20 years, she lost her appetite and became very thin, she was very unsteady on her feet and lost her sight in one eye. She also lost her hair and didn’t get on with wigs but somehow managed with all sorts of headpieces and extensions. Towards the end, she found it hard to communicate and would lose her words. It got to the stage where she couldn’t even write a birthday card. 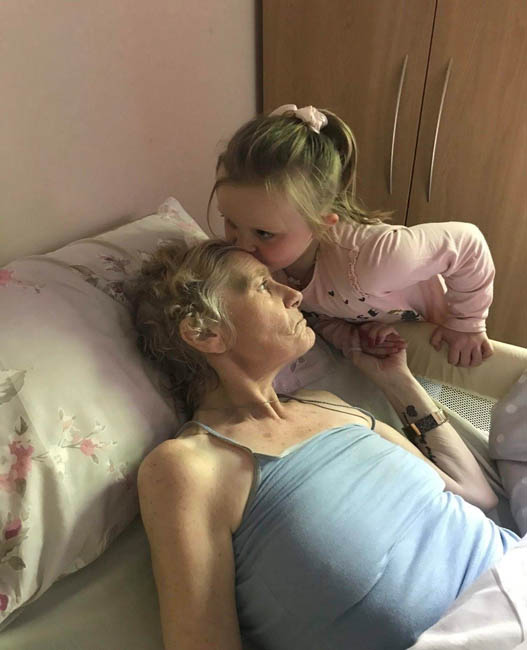 I was pregnant when Mom was diagnosed in 2012 and I supported her as much as I could. At the time she was looking after my brother Ben who had complex needs and lived with her in Worcester. After her diagnosis and surgery, Mom was no longer capable of looking after Ben so he moved into his own place. Sadly, he found it hard to cope and, tragically, he died in 2017 at the age of 27 having suffered problems with his heart and thyroid. It was a desperate time for us all and not only was Mom trying to cope mentally and physically with her own situation but she was also grieving for Ben.

Mom had suffered headaches for years. She used to call it “knife eye” because of the stabbing pains but, ironically, it wasn’t a doctor who discovered it but an optician in Worcester during a routine eye exam. She was seen urgently and had a scan at Worcestershire Royal Hospital. At first, she was told the growth was low-grade but a biopsy showed the tissue was in fact an aggressive grade 4 GBM. 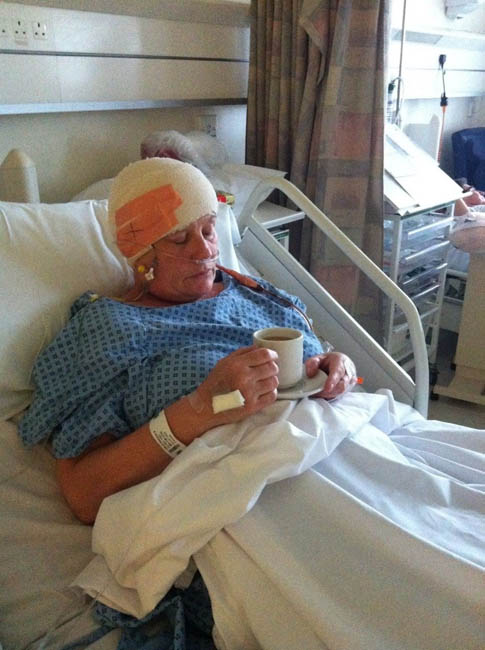 The impact of Mom’s diagnosis was life-changing, not just for her but on us too. It dominated our lives for seven years and it caused me to make drastic decisions about my own life.

While we were going through this with Mom, another member of the family was fighting breast cancer. Because of this Mom begged me to be tested to see if I had the BRCA1 gene mutation which meant I had an 80% chance of developing breast cancer and a 60% chance of having ovarian cancer.

Sure enough I was a carrier and, in line with Mom’s wishes, I had a double mastectomy in November 2018 and then my ovaries removed in February 2019. It was a lot but I was focussed on getting it done in order to give Mom some peace. 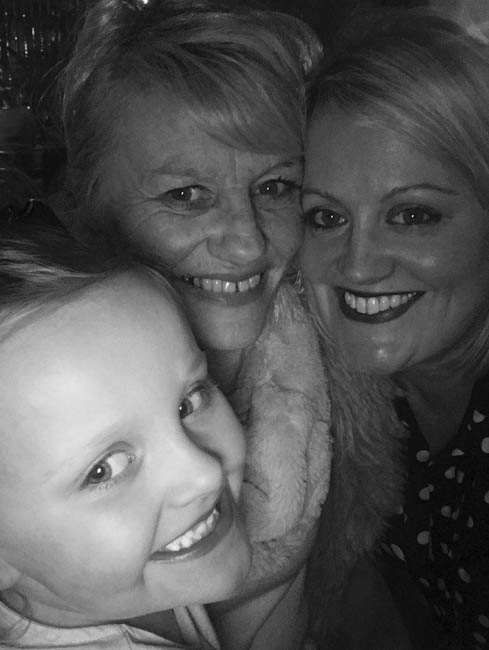 I was pleased that I was able to do this for Mom but, in other ways, regretted it as I contracted a severe infection, was plunged into surgical menopause which was brutal, and of course, it took away any chance of having another baby. My partner Kev has been the most wonderful support through all of this.

Mom and I both shared a very dry and sarcastic sense of humour so somehow; we laughed our way through it. Now of course I am faced with the prospect of Eva going through the same thing. There is a 50:50 chance that she too carries the gene but she won’t have to make any decisions until she is in her 20s. 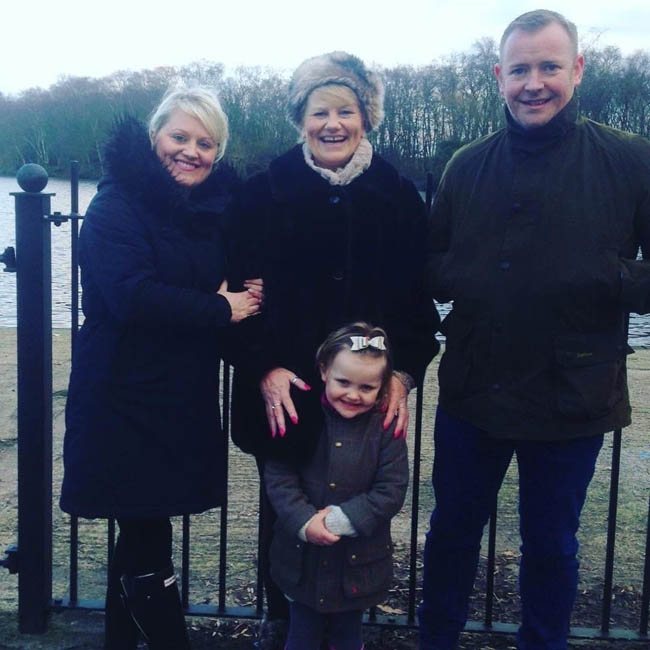 We’re fortunate that we can protect ourselves from breast cancer and ovarian cancer but there is nothing to stop people like Mom getting a brain tumour. Mom used to ask why brain tumours “were at the bottom of the pile” when it came to research funding.

As Mom came to the end of her life, we weren’t able to get her a hospice bed but she spent her final weeks in a wonderful nursing home albeit surrounded by people who were at least 20 years older than her. The end was harrowing and I am determined to focus on something positive. That’s why I am sharing our story in the hope of raising awareness of this dreadful disease. I am working with the charity Brain Tumour Research which is campaigning for governments and the larger cancer charities to invest more to find better treatments and, ultimately, a cure for brain tumours. On Saturday 26 September, Eva, Kev and I will be taking part in a Walk of Hope around Dove Stone Reservoir on Saddleworth Moor in Mom’s memory.

I have been delighted that my nomination for Brain Tumour Research to be Charity of the Year for Manchester City Council where I work in the City Policy Department has been successful and look forward to a year of activity to help make a difference.

If you have been touched by Debbie’s story and would like to know more about our lobbying, research updates and fundraising opportunities, please sign up to our weekly e-news. 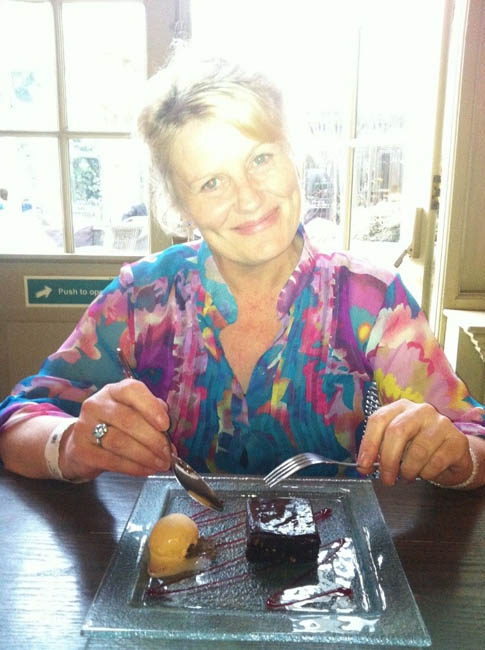