We are grateful to Dave who worked with us in September 2015 to share his story here. Sadly, he passed away in February 2019. We remember Dave as we continue our work to raise awareness of this devastating disease and to fund research to help find a cure. He will be forever in our hearts.

Father-of-three Dave Holden is living with a grade 3 astrocytoma brain tumour. It was diagnosed in 2010 after he began to experience difficulty driving. The tumour responded well to 18 months of chemotherapy and radiation but a scan in March 2015 revealed it had returned. Dave continues to work full-time and remains positive about the future.

“I can’t be bothered with the doom and gloom. I have always been quite a positive person and now it is more important than ever. I do have days where I can feel down, but my wife gives me a kick to help me get over it. We have the kids to think about and I need to be here and on good form for as long as I can in order to look after my family.”

It was the summer of 2010 when I had the first inkling that something was wrong. I was having trouble lifting my left foot to operate the clutch while driving. I already had a bad knee through injuries from skiing and football and thought the problems with my foot could be something to do with that.

Fortunately, I have private healthcare through my job and so I went for a specialist scan. Although he didn’t say as much, the doctor clearly suspected something and he referred me for a full body MRI scan.

I had the scan and the next day we were told that I had a brain tumour. My wife AnneMarie, and our three boys Dan, Callum and Alex, and I were due to go on holiday to Turkey. The timing wasn’t great but we went anyway.

We had a good holiday. The first week AnneMarie found things difficult while I felt OK but was probably in some sort of shock. The following week though things were reversed and reality began to dawn on me so then it was AnneMarie who was in the supportive role.

I remember very clearly the date we were given the MRI scan results; it was Friday 13th August. We were told I had a grade 3 astrocytoma brain tumour and the worst case scenario was that I would lose control of my left side, having difficulties with speech, cognition and mobility. I was made very aware of the seriousness of the situation and told I could expect to live for between five and ten years.

It is likely the tumour had been growing in my head for years and the problems started when it became high-grade. I have already passed the five year mark and am determined to be here for another ten years or more.

After the diagnosis I started my treatment. First time round I had five days of chemotherapy every 28 days stretching over 18 months. Things were going well until March 2015 when a follow up scan showed the tumour was back.
Now I’m on the chemo again. So far the treatment has only made me sick once and I was half bald anyway so I’m not worried about losing my hair!

I can’t be bothered with the doom and gloom. I have always been a quite a positive person and now it is more important than ever. I do have days where I can feel down but my wife gives me a kick to help me to get over it. We have the kids to think about and I need to be here so we try to keep things as normal as possible.

Before my diagnosis I had never had any experience with cancer, let alone brain tumours. When something like this happens you learn very quickly although researching on Google is sometimes dangerous. It is very shocking to learn how many people are affected by brain tumours and yet this disease receives just 1% of the national spend on cancer research.

I have managed to continue working full-time in Slough and Windsor as an engineering manager for BMSI, part of British Gas Business. I have to rely on taxis and the train as I can no longer drive and that is something I really miss. I’ve not really had to have any time off work as, when I’m on my chemo medication, I can work from home when needed.

At first I tried to avoid telling people at work about my diagnosis because I didn’t want people to think I was suddenly unable to do things I would normally do.

Now, everyone knows and it has helped me raise awareness of brain tumours.

For the past two years the company has supported my efforts to do all I can to raise awareness and to fund vital research. So far we have raised £1,500 in 2014 and £3,800 in 2015 through events such as Wear A Hat Day. 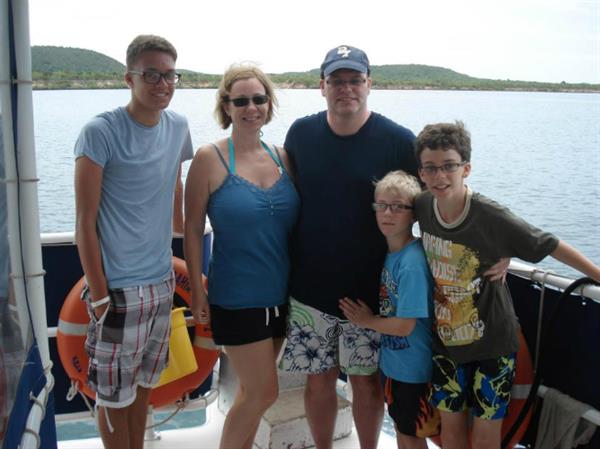