Freelance writer and loving wife Collette had plans for a blissful retirement with her husband of 29 years, Reinhard. However, after being diagnosed with a glioblastoma multiforme in August 2016, her dreams of travelling and relaxing were tragically cut short. She faced her illness with optimism and courage, bringing laughter to all those around her, until she sadly passed away at the age of 65 with her husband at her bedside.

“I could see that she was drifting away from us and, as she slipped into a coma, the feeling of powerlessness was overwhelming. I had done all I could to help her. I was woken up by the night nurse who told me Collette was about to die. I’m grateful that this allowed me to be with my wonderful wife for one last time.”

Here is Collette’s story, as told by her husband, Reinhard…

After meeting through a mutual acquaintance in December 1988, Collette and I shared 29 years of married life together. I was struck by the dedication she showed in her work as a freelance writer and as a deputy head of a primary school for children with special needs. She was a positive and humorous person, who was incredibly forward-thinking and courageous as she faced the certainty of death.

I took early retirement from my position at Newcastle University in 2002 and, although I continued to work in my field of East Asian politics, this enabled Collette and me to thoroughly enjoy life winding down in our homes in north Devon and abroad in France.

It was in the summer of 2016, in France, that we first realised something was wrong. Collette had flown out to join me at our home in La Liviniere, near Carcassonne, but, before getting on the plane in Bristol, she fell up the stairs in the airport. Unknown to Collette, her sister rang me to give me the heads up to take her to the nearest doctor when she got to France. I met her at the airport and told her we were going straight to see a GP.

By the time we got to the doctors, it was apparent that Collette needed immediate medical attention. The left side of her mouth had dropped and she had problems with her balance, so the doctor was worried that she may have had a stroke or a brain haemorrhage. It was such a shock for the two of us, not least because she was such a healthy woman, who had never stayed in a hospital in her life and rarely complained of being unwell.

Collette was taken to the nearest hospital, in Carcassonne, where a CT scan revealed that there was ‘something’ on her brain. She was transferred by ambulance to the neurology department in Toulouse, and, after an MRI scan, it was there that we were given the agonising news that she had a very large glioblastoma multiforme – a highly aggressive type of tumour. The news was like a hammer that ripped through our lives and I remember feeling completely lost at the time.

Collette was operated on by an excellent neurosurgeon in Toulouse who was able to remove about 90% of the tumour. This gave us some hope in the midst of a terrifying diagnosis. Throughout this traumatic time, Collette was typically light-hearted and shared jokes with the medical staff. She was scheduled in for radiotherapy and chemotherapy after she had recovered to try to tackle the remaining part of the tumour.

About four weeks after her operation, in September 2016, Collette had radiotherapy for five days a week. I vividly remember the 170-mile round trip to and from Toulouse, which was tiring for the both of us, but I wanted to be with Collette as much as possible. It was difficult for us, not least because Collette was not comfortable in French, and the treatment had an impact on her physical health.

Simultaneously to this, Collette began a course of chemotherapy – temozolomide to be precise. She had some nasty side-effects including nausea and constipation, alongside the inevitable hair loss where the radiotherapy had been targeted, like a tonsure in reverse, but, again, she was totally resilient and wasn’t afraid to show-off her unique hairstyle in the local town.

In November 2016, we were finally able to return to the UK and life, thankfully, settled down a little. Collette had a routine MRI scan every three months to watch for a recurrence of the tumour although, to this day, I’m angry that I didn’t push for her to have more regular scans. It disturbs me that the scans are so rigidly scheduled for every three months for this highly aggressive cancer – even after the MRI had shown the recurrence of the tumour at the end of November 2017 – and I’m left with the feeling that if she had more regular scans her life may not have been taken so soon. Looking back, I feel angry that there were so limited treatment options. I remember frantically reading research articles, about drug combinations, such as combining temozolomide with methadone, that had shown promise against the disease, and I handed these to Collette’s oncologist in desperation. I was stuck at a crossroads between our doctors in England and those in Toulouse, but, in the end, we had been told right from the beginning in Toulouse that any treatment was only going to prolong her life.

After downsizing to a bungalow shortly before Christmas, life moved on and we made the most of our situation. In March 2018, we were back at our home in La Liviniere, and when we showed the latest MRI to doctors from the beginning of March, a second emergency operation was recommended. The fantastic neurosurgeon who had previously operated on Collette filled us with optimism and reassured us that in Toulouse ‘we fight’ but, tragically, as he opened her head, he realised that the tumour had grown so much even within three weeks that he wasn’t able to remove it from the new second location. It was now too deeply enveloped around the blood vessels in her brain. Nevertheless, he was able to excise the parts of the tumour that were affecting her mobility which, thankfully, allowed Collette to be able to move for a longer amount of time. I’m enormously grateful for the excellent treatment she had in France; I know it helped to extend her life.

The next month, in April 2018, we were able to return to the UK. By this time, Collette’s treatment had changed to palliative care and the doctors told us to try and enjoy the little time we had left. Over the coming weeks, she declined slowly but was somehow able to muster the energy to complete a couple of adventures left on her bucket list. We took a trip to Dublin to watch Riverdance and, as her mum was Irish, it was a wonderful way to enjoy her heritage and meet relatives. Although I was averse to going away, in case something happened, I’m really glad we shared this time together. We also visited the museum of the Mary Rose in Portsmouth and, although Collette was slowly slipping away from me, I hold this fantastic venture dear to my heart.

By the time we returned from Portsmouth, Collette was in a wheelchair and our lives became centred around carers, commodes and other equipment. The hospice was so good to both Collette and me, offering practical and emotional support. As her life grew closer to the end, the hospice and the fantastic carers made it possible to fulfil her wish of dying in our new home. For four nights a week, a night nurse would visit, meaning I could get some much-needed sleep.

I could see that she was drifting away from us and, as she slipped into a coma, the feeling of powerlessness was overwhelming. I had done all I could to help her. On the 24th August 2018, I was woken up by the night nurse who told me Collette was about to die. I’m grateful that this allowed me to be with my wonderful wife for one last time.

Life since Collette’s passing has been very difficult and a challenge for me. I’ve been having counselling with the hospice and this has helped me to come to terms with my loss. I have also found travelling and getting back to work has helped to give me purpose and I have plans to explore more of France and Japan. Just the day after her funeral, I attended a conference in Sheffield and I was glad to have something to focus my mind on in this upsetting time. I’ve also found a great deal of comfort in our cocker spaniel, Rhona, who is very affectionate and gives me strength during the dark days. I can’t help but think the tumour has smashed our plans – Collette had so much more life to give and we could have enjoyed travelling and exploring the world.

Now, I’m left with a lot of unresolved emotions and anger at the underfunding for research into brain tumours. I personally feel like there should be more research into different drug combinations and notably immune therapy to be used in the treatment of glioblastoma and also further research into the possible lifestyle factors associated with the disease. I fear that treatment will be hampered by Brexit, for its impact on the NHS and the retention and recruiting of staff, and I wish more could be done to help save the lives of those diagnosed with this merciless disease. 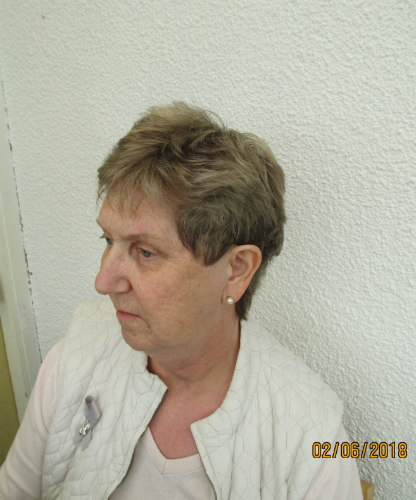