Husband and father of four boys, Clive Gathercole was eventually diagnosed with a glioblastoma brain tumour after suffering months of health problems. He died in August 2012.

“In my anger I thought about complaining about the terrible care we received and the problems with securing a proper diagnosis, but I am not sure looking back at the past negatively is helpful, so instead as a family we are forging ahead with our fundraising plans to fund more research into brain tumours. I would hate to think of other families facing what we have been through, and think the lack of awareness of this disease is a tragedy in its own right.”
His wife Wendy tells his story …

In 2011, Clive and I were out for a run with our son Tom on the North Downs. It was Christmas time and we’d been to a party the night before; as usual I couldn’t keep up, so I ran behind while Clive and Tom ran ahead. We were running about five miles – a typical distance for us, but at the end Tom said: “Dad’s not feeling well.” This was an understatement, so I drove to the nearest house to ask to use the phone as we had no reception on our mobiles. At the house, Clive got worse and had what we think was a grand mal seizure. I gave him the kiss of life and I was advised to get hold of a defibrillator. We were all pretty convinced it was a heart attack. On arrival at hospital the medics drew the same conclusion and Clive was admitted to the cardiac ward at the Royal Surrey hospital for a week.

Like many people I started to research online what this mystery illness was; I was not convinced it was his heart. I came to my own conclusion that Clive needed to be seen for an MRI scan as I saw his symptoms matched those of someone with a brain tumour. Therefore only by insistence did Clive see a consultant neurologist before being discharged. Sad to say the consultant we saw at The Royal Surrey Hospital did not agree and said: “Madam, you’ve been watching too many medical dramas on TV!” He diagnosed temporary epilepsy and said Clive should not drive for six months.

Fortunately, through Clive’s work he had private medical cover, so I persisted and we went to see a consultant neurologist at a different hospital. At this stage Clive was occasionally feeling faint, but otherwise ok. This time the consultant told us that Clive had had a ‘funny turn’, he could drive and that if we absolutely insisted he would arrange for an MRI Scan. We waited four weeks to get the results of this privately paid for MRI scan. Clive was called in to collect the results alone and told he had a low-grade brain tumour. We were told it didn’t need treating, just monitoring, and was not life-threatening and to come back in six months.

Still feeling unsatisfied we contacted a different neurologist in London. However before we could get to that appointment I was called by Clive’s work and told: “You need to come and get him, he’s not well.” Luckily, with private cover I was able to get him admitted into the National hospital for neurology and neurosurgery, having lost faith in our local hospitals to deal with our problem.

Here Clive finally had a proper diagnosis, five months after his initial issues. He had glioblastoma and the tumour was growing quickly. From this day on he never recovered; he couldn’t read, write or follow a TV show properly. He never returned to work. This was incredibly frustrating for him, particularly as the changes were so sudden.

I was angry. Several well-regarded medical specialists had missed the tumour and as a result Clive’s quality of life was compromised. If he’d had an earlier diagnosis he might have had treatment and been emotionally better prepared for what was in store. It was really important to him to ‘leave his affairs in order’ but tragically, Clive was unable to read and write, so he was rendered incapable of fulfilling his own wishes.

I was a newly qualified teacher at this point, three quarters of the way through my first year teaching, but had to give up, as Clive got agitated if he was left on his own at home for very long. His personality had changed dramatically. He had been a finance director for a corporate travel agent in London and a lovely dad but the symptoms of the brain tumour really changed him, affecting his relationship with his sons. Clive died on the 27th of August 2012.

In my anger I thought about complaining about the terrible care we received and the problems with securing a proper diagnosis, but I am not sure looking back at the past negatively is helpful, so instead as a family we are forging ahead with our fundraising plans to fund more research into brain tumours. I would hate to think of other families facing what we have been through, and think the lack of awareness of this disease is a tragedy in its own right.

In 2015, my eldest son Callum will attempt to break the world record for the youngest person to row solo across the Atlantic as part of the Talisker Whisky Challenge. He will need to row alone and without a support crew for approximately 100 days to break the world record. He will be tracked by radar and have a satellite phone, but otherwise he will be totally alone at sea. I’ll see him off from La Gomera in the Canary Islands and plan to meet him at the end of the incredible challenge in Antigua.

Along with his brothers, Tom, George and Jonathan, I am his biggest champion and fundraiser. Of course I am frightened for him but he has my wholehearted support and I am extremely proud. As a family, we are committed to raising money to fund research into brain tumours, the biggest cancer killer of children and adults under 40. I hate to think of other families facing what we have been through. The lack of awareness and the fact that brain tumours receive just 1% of the national cancer research spend, is a tragedy in its own right. 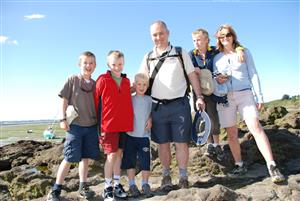