Christine Scott was diagnosed with a low-grade oligodendroglioma in 2011. Her prognosis was good and, despite epilepsy, she continued with a normal life – even continuing to ride her beloved horses. After five years however, the tumour became aggressive and even though she underwent surgery and treatment, Christine deteriorated. She died in 2018, aged 58, leaving her husband, five children, a granddaughter of less than one year, two horses and a dog.

“Over the course of the year, she went from walking normally to relying on a walking stick to a Zimmer frame to a wheelchair. Determined as ever, Christine had kept trying to ride throughout all of this – even if it was just sitting on the horses while being led around a paddock – but in summer 2017 she had to stop. Although she dealt with her illness fairly well, not being able to ride was extremely difficult for her.”

Here is Christine’s story, as told by her husband Andrew…

One of the things that people always comment on is how Chris didn’t let her diagnosis stop her. She had her first epileptic fit in 2011 whilst horse-riding but even after she was diagnosed with a brain tumour and the fits became a regular occurrence, she wasn’t afraid to get back in the saddle. She was always one to pick herself back up.

Chris and I were married for 39 years; we’d met at a church youth group and set up home in Croydon where we made a nice life for ourselves, our three daughters and two sons. Although we grew up in Bebington on the Wirral, Croydon was very much where we considered home. However, living in Croydon did become a strain after Chris’ diagnosis. She didn’t drive, which made the seven-mile journey to see her horses, Sid and Scandal, a challenge. Not one to be put off by distance, Christine would ride her electric bike to and from the stables every day – a journey which took her 45 minutes each way.

We carried on this way for a few years and even though Chris was always on medication, her epilepsy didn’t improve. So, in 2016, we decided to move out to the countryside in Wiltshire, where we could have land to keep Sid and Scandal. We thought Chris would have another 12 years or so and this new location would be an enjoyable place to spend them.

In October 2016, after a routine scan and only one month after our move, we were told that Chris’ oligodendroglioma tumour had changed to grade 3 and, whilst they hadn’t wanted to operate before, surgery was now the only option. I remember asking if it was ambitious to expect Chris to have another five years, and the doctors at St George’s Hospital told me it was a reasonable prognosis.

Surgery went ahead in November 2016 and she started radiotherapy in February 2017. It was an awful six weeks and Chris really struggled but it was hard to tell if it was the treatment making her ill or if it was the tumour growing. She also started chemotherapy but nothing seemed to stop the disease from spreading.

Chris deteriorated throughout 2017, which was hard to see. Over the course of the year, she went from walking normally to relying on a walking stick to a Zimmer frame to a wheelchair. Determined as ever, Chris had kept trying to ride throughout all of this – even if it was just sitting on the horses while she was led around a paddock – but in summer 2017 she had to stop. Although she dealt with her illness fairly well, not being able to ride was extremely difficult for her.

I had been working full-time in market research but in August 2017, I went part-time and eventually in November 2017 took a three-month sabbatical so I could care for Chris at home and also tend to the horses. We had a lot of help from social services and at least one of the children was around most weeks to help too. No matter what we or the doctors did though, Chris continued to deteriorate and in January 2018 we had to move her into a nursing home. We didn’t need scans to tell us that the tumour was growing – it was obvious what was happening.

Chris remained incredibly brave throughout the whole process. She was a woman of strong faith which I believe helped her immensely. The children and I probably struggled more than she did – although we’d always known this would happen, we didn’t expect the end to come so soon.

In the months leading up to her death, Chris was unable to feed herself and complete the daily tasks that we all take for granted. She became completely immobile, confused and unable to communicate. Nothing could have prepared us for this.

We held her funeral in Croydon. The day started with a private cremation for family and very close friends, followed by a service of Thanksgiving at the Methodist church in Addiscombe, Croydon, where she had been involved for many years and which more than 100 people attended. It was clear just how loved she was and how highly everyone thought of her.

We are now all trying to pick up the pieces and return to normal. We know that’s what Chris would have wanted. The children are all coping in their own ways and Sid and Scandal are still part of the family. A family that will grow further in February 2019 with the birth of another grandchild that Chris would have been so pleased about. In April 2019, my second youngest, Matt, will run the London Marathon for the Brain Tumour Research charity in his mum’s memory. I’ll be extremely proud of him as he crosses that finish line and I’m sure Chris will be too.

I hope Chris’ story will inspire others to support more funding for research into brain tumours. It’s a cruel and relentless disease and without more research, more and more people are going to suffer.

If you have been inspired by Christine’s story, you may like to make a donation via https://www.justgiving.com/fundraising/christine-scott-btr or leave a gift in your will via www.braintumourresearch.org/legacy 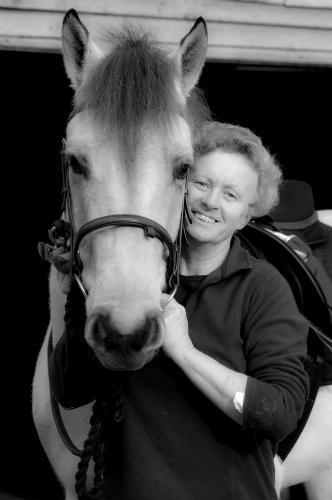