Charlotte Barber defied the odds, living for 29 years after her brain tumour diagnosis when she had been given a 30% chance of surviving past the age of 13. She underwent treatment, which was cutting-edge for its time, at Addenbrooke’s Hospital in the late 80s, paving the way for future patients, and was part of the Childhood Cancer Survivor Study. Despite overcoming many hurdles and learning to live with the debilitating side effects of the disease, Charlotte sadly died on 17th May 2018 at the age of 37. Her mum Julie reflects on Charlotte’s journey and her desire to contribute to research in Charlotte’s memory.

“Her consultant has since told us that Charlotte was a pathfinder and a hero, and those undergoing treatment today owed her a great deal. She was a hero and my heart burst with pride to hear someone else say it. Her childhood was taken away from her by this cruel disease but she never once complained and that smile never faltered.”

When your child is unwell, you will go to any length to be there for them; the daily 100-mile round trip to take Charlotte for her treatment was just something we simply had to do. It was several years ago now but I still remember the journey; we drove between Norfolk and Cambridge for seven weeks, watching as the cherry trees blossomed and matured, waiting for more answers, and worrying that our daughter might not survive

We first noticed Charlotte’s symptoms when she was eight-years-old. She was a happy, sweet and kind little girl who enjoyed life at primary school. She loved the colour pink and in later years, she even had a shocking pink wheelchair. The signs were small to begin with: she would fall back into bed again or complain of headaches at school. We took her to Disneyland in November 1988 and instead of running around the parks like a healthy little girl would, she had to be carried around by her dad, David. I knew something wasn’t right.

The GP dismissed me, saying ‘mums always worry!’ and assured me that nothing was wrong. In desperation, her Granny and Grandpa took her to Spain, hoping that a holiday would help revive her but, while they were there, they phoned to say that we shouldn’t worry but Charlotte had developed a squint in one eye.

I did worry and as soon as she was back with us, I insisted the GP gave us a private referral. Within days, we were called urgently to the Norfolk and Norwich University Hospital. What happened afterwards is such a blur – a CT scan, a diagnosis in March 1989, an urgent referral to Addenbrooke’s – David and I didn’t have a moment for the news to actually sink in. Our daughter had two brain tumours… how could this be? How could we not have known?

Charlotte was fitted with bilateral shunts immediately as she wouldn’t have survived the night without them, meanwhile David and I tried to process all the information we’d just been told. One of the tumours was inoperable and the other was near her pituitary gland, which we later found out to be a medulloblastoma. Scans also found a small tumour at the base of her spine, meaning that the cancer had metastasised already. It’s disturbing to think that the disease had been taking hold of our daughter’s body and we’d been none the wiser.

One of the tumours was removed and then began the seven-week course of craniospinal radiotherapy to treat what remained. Following that, Charlotte had vincristine and carboplatin chemotherapy which made her really poorly and she was admitted to the paediatric intensive care unit (PICU).

It was 1989 and I remember a toy box in the corner of the PICU which had been donated by Children in Need, a campaign which was still new at the time. It’s funny how such insignificant things stay in your memory, but thinking of that box makes me realise how well Charlotte did to survive all these years. She was given a 30% chance of surviving past five years, but Charlotte fought on for 29 more, and we were, and still are, so very proud of her.

Those years weren’t easy: Charlotte wasn’t expected to leave intensive care as her platelet and red cell counts were so low; she also developed an oesophageal stricture as a result of the treatment and underwent numerous operations over the years to try and fix this. Her days revolved around a strict feeding regime until the consultant took the decision to fit her with a pioneering jejunostomy tube which bypassed her stomach and fed directly into her small intestine.

All this treatment was cutting-edge at the time and Charlotte was the very first to undergo Nissen fundoplication laparoscopically at our local hospital, and also one of the first to be fed through a MIC-KEY gastrostomy. Her case formed part of the British Childhood Cancer Survivor Study, the first population-based study of survivors of childhood cancer, which involved nearly 18,000 young people diagnosed between 1940 and 1991. Her consultant has since told us that Charlotte was a pathfinder and a hero, and those undergoing treatment today owed her a great deal. She was a hero and my heart burst with pride to hear someone else say it. Her childhood was taken away from her by this cruel disease but she never once complained and that smile never faltered.

In between the treatment, the operations and the complications, Charlotte had a happy life at home on the farm, watching the animals and enjoying the garden. She gradually recovered from the chemotherapy and radiotherapy but sadly lost her reading, writing, numerical skills and eventually her speech. It was heart-breaking to see as she used to love completing word search puzzles and could whizz through them faster than most adults could. In addition to the learning difficulties, Charlotte had other complications post-treatment including hair loss, hypothyroid, epilepsy, right-sided weakness and scoliosis. The drugs interfered with her growth too and I gave her daily injections of growth hormones.

Charlotte deteriorated quickly in the last six months of her life. She became increasingly sleepy and slow to respond which we thought was due to the radiation but an emergency admission revealed a huge meningioma and high pressure in her brain again. This time, 29 years on from the original tumour, they broke the news that there was nothing more they could do.

At the age of 37, Charlotte passed away peacefully in her bed at home in a shaft of spring sunshine, surrounded by all those who loved her. We held her funeral on Friday 1st June 2018 at Wymondham Abbey Church and laid Charlotte to rest in a private committal at home on the farm which she had loved so much. She left behind two younger sisters, Annabel and Elizabeth.

Brain tumours are indiscriminate and cruel and we must do whatever we can to raise awareness and fund research. Charlotte defied the odds but despite those extra years, she leaves a heartbroken and devastated family behind. It’s important to me to fundraise in her memory, and although nothing can ever make up for our loss, I want to ensure Charlotte didn’t die in vain. 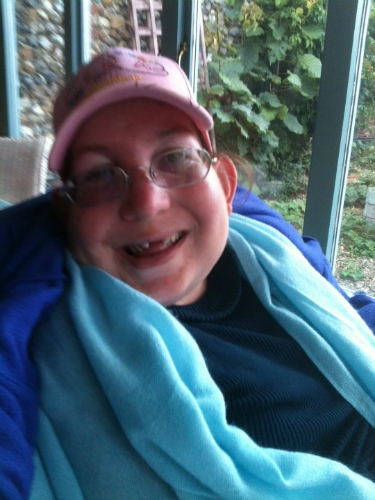