Caroline was initially diagnosed as having depression (which was something she had suffered before) and then a breakdown.  Her husband, Andy, first noticed something wrong after Christmas when Caroline just didn’t seem herself, wasn’t focusing on things and wasn’t caring for herself.

By the time Caroline became incontinent, she was assessed by health workers and was admitted to a psychiatric hospital, where she spent a week before having to leave as the hospital couldn’t provide the level of care she needed - by then she was unable to do anything for herself and even had to be moved with the use of hoists.  There had been no improvement in Caroline’s condition, even with medication and therapy.

Caroline was admitted into Southampton General where further tests were carried out.  We were then to discover the unimaginable and devastating presence of an undiscovered, aggressive brain tumour.  A scan revealed a cyst the size of an orange and what looked like a sea of white mist behind it.  Caroline’s husband, Andy, was given the terrible news that Caroline was dying and that she had a maximum of three months to live.  In fact, Caroline survived just eight weeks more.

Andy tried to keep life as normal as possible for Erin and agonised over whether to share the diagnosis with his wife.  He thought she should know and wanted to tell her, but the doctors kept changing their minds as to how she would take it.

Faced with such earth-shattering news, the family began to work out where Caroline would spend her final days.  In the end they rejected the idea of a residential care home and opted for Andy’s sister’s house as Karen had a large enough home to accommodate having a bed in the living room downstairs.  Erin could visit with Andy and spend time with Caroline whenever they wanted and then go home to some sort of normality.

Three days before Caroline died there was quite a big build up.  During the day the carer said that they thought that it was going to be her last night.  Andy phoned and texted everyone to let them know what was happening.  Everyone gathered and Caroline was in a bad way all night, but for the last couple of days before she passed away on 31st May 2010 she was really calm.

For Erin, at her young age, her mummy is an angel and is in heaven - but sometimes she still says “Mummy’s taking a long time coming back”.

Karen can see how much little Erin has changed since they lost Caroline and finds it very hard that Erin’s mummy is not here to see her growing up.  She is adamant that Caroline’s memory is kept as a positive thing for Erin and has set up Erin’s Angel, a fundraising group of Brain Tumour Research, to raise desperately needed funds to find a cure for this cruel disease

Karen says: “We as a family did not know very much about brain tumours and the symptoms, so we did not recognise the signs. They are the biggest killer of children and people under the age of 40 and there is not enough information out there.”  Karen is campaigning for greater awareness of brain tumours.  “If people show personality changes and appear to be suffering from depression which then continues to get worse, it might not be that.  It could be a brain tumour…” 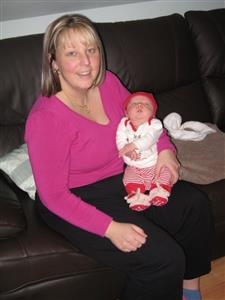