Brain's story was written while he was still with us. Sadly Brian passed away at the end of November 2018. We will update his story fully at a more suitable time. Our deepest condolences go out to his wife Fay and their family at this immeasurably sad time.

Brian Rockell has worked within the healthcare industry for decades, yet when he was diagnosed with a glioblastoma, aged 68, he was shocked by the distressing experience of brain tumour patients. Although facing his own anxieties and challenges, Brian is now determined to campaign for and support others affected by this devastating disease.

“I was transferred to the Royal Sussex County Hospital for surgery…. and it went relatively well. Looking back, the surgery was the easy part. I had no idea then how much support I would need as a patient and how different my life was about to become...”

Although retired, I had led a very busy life and that’s partly why I didn’t take my symptoms too seriously. I was sleeping a lot and day-to-day tasks were much harder than they used to be. My wife, Fay, and I have always been passionate about healthcare and we volunteered as Community First Responders, helping to reach 999 emergency call outs and save lives, as fast as possible. Since retiring professionally as a Director of Operations for St John Ambulance, although still undertaking some work part-time, I had also kept busy as a public governor for our local NHS Trust, representing the patient and public interest.

It was only after I’d lost two stone in weight that I became concerned about my health. The weight had been dropping off over many months but I thought, and hoped, perhaps I’d been eating more healthily. Eventually, I went to my GP and was referred for a gastroscopy to try to find out what was going on, but the results came back blank and it wasn’t taken any further.

One day in March 2016, I was due to attend and give a speech at an important meeting, where the NHS Trust Chairman was to hand me his resignation, in my role then as Lead Governor. My symptoms had been gradually worsening and that morning Fay had tried to persuade me not to go to the meeting, but I was completely focused on attending and fulfilling my role - I guess I was in denial, which can be an actual symptom of a glioblastoma, called anosognosia. However, when I arrived to a room full of healthcare professionals, it was obvious to them that something wasn’t right. They took one look at my sloping shoulder and drooping face, heard my slurred speech, and within minutes I was in the back of an ambulance.

I was admitted to East Surrey Hospital as a stroke patient and, after CT and MRI scans, it wasn’t long before they found I actually had a brain tumour. It never once crossed my mind, or that of the GP, that this could be what was causing all the symptoms. Initially, I didn’t realise how life-limiting my diagnosis was; I thought I would have surgery and would recover, and it would be as simple as that. However, being told that I might lose my life, even during surgery, made reality sink in.

I was transferred to the Royal Sussex County Hospital for surgery, a craniotomy, to remove as much of the tumour as possible, and it went relatively well. Looking back, the surgery was the easy part. I had no idea then how much support I would need as a patient and how different my life was about to become after the diagnosis of right temporal glioblastoma, a rare and incurable brain cancer.

Fay gave up her job in teaching to care for me at home and I started a course of radiotherapy and chemotherapy. The aftermath was a struggle as my faculties weren’t as they were before: I lost a lot of my muscle mass as a result of the steroids I needed, and the psychological effects were extremely difficult to bear. More chemotherapy followed but, in August 2016, sepsis took hold, a side-effect of the chemotherapy, which Fay diagnosed, and I was critically ill in hospital once again. It was very debilitating but I came through it. However, as a result of the sepsis, severe fatigue and blood test results, my consultant decided I should stop the chemotherapy a little early, at five cycles rather than the planned six. Finishing the treatment was a tremendous relief and I looked forward to regaining my strength and finding my ‘new normal’.

The whole experience opened my eyes to just how much support brain tumour patients need. I was also lucky to have my daughter Eve, who works for an NHS Clinical Commissioning Group, to advise me too but many people just don’t get this advice or guidance, or the skill or advocacy that Fay brought. Seeing high profile figures, such as Dame Tessa Jowell, accessing special treatment that wasn’t available to me, or others like me, underlined the sad and most difficult state of affairs for brain tumour patients.

After recovering from the sepsis, I went back home and focused on making progress. It took small steps but very slowly, over very many months, I could start doing chores around the garden and walking up steps. I had initially been on a waiting list for physiotherapy but by the time the appointment came around, I didn’t need the help anymore. It’s this lack of follow-through and continuity of care for patients that is so frustrating. Fay didn’t return to work, as although I was making good progress, I didn’t always recognise the risks involved or the strength required with everyday tasks and still needed much help.

Initially, I was going for three-monthly scans at the Princess Royal Hospital at Haywards Heath to monitor for any tumour regrowth but then, worryingly, I was told there was an ‘enhancement’ showing on a scan which, amongst other things, could be regrowth. It was a very worrying time but this didn’t last long, thankfully, and my next couple of scans showed the ‘enhancement’ was becoming smaller. My scans then returned to three-monthly and are now four-monthly, however the worry still remains.

Now, I live from scan to scan, anxious of what’s to come but also eager to adjust to and develop my new life. Radiation has been ‘the gift that keeps on giving’ and my hearing and eyesight have deteriorated, but I’ve just had to adapt. Apart from memory loss, my mind is still very capable and I keep myself busy in my role as an NHS public governor. I’ve also devoted myself to helping others who are suffering from the disease and campaigning for better research and support. I’m active on online forums and engage with the brain tumour community as much as I possibly can, while I still can. Fay and I also try to keep fully abreast of relevant developments from a patient/carer angle, not only in self-interest but to support others.

It is a hard journey and if you don’t survive it, it may become easier for you but horrific for those left behind. Nevertheless, I’ve done a lot of research and realise that despite everything, I’m currently one of the fortunate ones. I just hope that I can use my healthcare background and new-found knowledge of brain tumours to bring about change, and that anyone reading my personal experience is inspired to both help the cause and find their ‘new normal’ life, as I have. 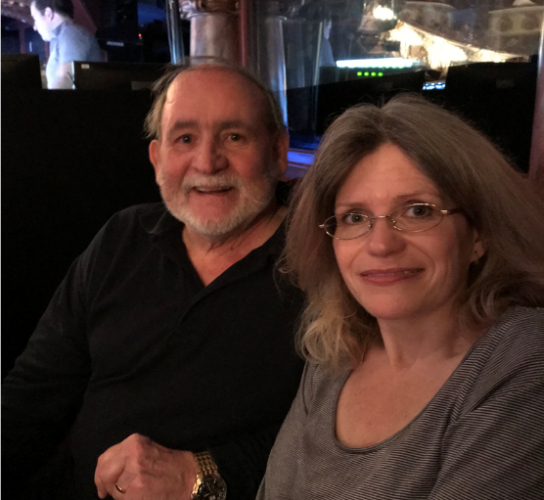