Brian lived in Gressenhall near Dereham, Norfolk and was a great family man and a wonderful husband.  He had three children – Camilla from his first marriage and Rosie and Tom from our marriage.  He cared deeply about each one of them and was particularly protective about Camilla who suffered badly with asthma and eczema from an early age.  Brian was diagnosed with a rare lymphoma brain tumour and passed away almost a year later, aged 62, on 23rd September 2006.

Here is Brian’s story as told by his wife, Sally…

“Brian knew he was going to die.  There were still lots of things he wanted to do, but he was at peace with himself, which was a huge comfort to me.  We used to sit together in the garden and he would tell me everything he wanted me to do with the children and his businesses after he had gone.  He was an amazing man, even in the last year when he was dying.”
When I met Brian he was an incredible business man with a real entrepreneurial flair.  His impresario instincts famously brought legendary performers Jimi Hendrix and Rod Stewart to Dereham during their early careers (Rod Stewart played football with his roadies in the market square) and he started the Big Fry fish and chip chain in 1969 with its first branch in Dereham expanding to 12 shops across Norfolk. He also bought a farm, growing potatoes for the chip shops and later became one of the biggest blackcurrant growers in East Anglia, supplying for Ribena.  You would never have guessed that he left school at the age of 15, never went to university and found time-keeping and taking orders from other people a bit of a challenge so didn’t stay in any job too long so the only way forward was working for himself.

Brian lived life to the full – he would get up in the morning and from then on he was a whirling dervish, always busy. But in May of 2005 Brian started to complain about feeling really tired and just wanting to lie down and go to sleep.  He didn’t have any other symptoms, not even headaches.

In November, following some dentistry work, Brian started experiencing pins and needles in his top lip.  He went back to the dentist who thought he had an infection and put him on a course of anti-biotics.

Brian then started to feel physically sick and unwell.  We were in bed one night when he went to move his arm and it wouldn’t go where he wanted it to go – it was totally out of his control.  Then he tried to move the other arm which wouldn’t respond as he wanted either.

I immediately called our GP, fearing that Brian had had a stroke.  She came straight away and advised us to go straight to hospital.  If she suspected anything she didn’t say.

It was December by this time and Brian was sent for a scan.  Later we were hit with the devastating news that there was a dark shadow on his brain stem which would need further investigation.

Before going to theatre to undergo a biopsy at Addenbrooke’s, Brian had a cage contraption screwed into his skull to allow the surgeons to use computer-assisted techniques to guide them during surgery, but when he got to theatre, the doctors realised that they didn’t have the right equipment to hand so he was brought back to the ward.  It was awful because we had both got so geared up for him to have the craniotomy.

When Brian finally did have a biopsy our hopes were soon dashed when we discovered that it was a lymphoma right in the brain stem.  If it had been anywhere else it probably could have been operated on, but there it was too dangerous.

Brian was given massive doses of chemotherapy to reduce the tumour. There was a glimmer of hope when a scan showed that it had reduced and for a few weeks Brian did feel better.  He even played a few games of tennis with Rosie and was able to use a treadmill in the garden room to keep the strength in his legs.

Brian also had radiotherapy and lost all his hair.  One day we put his walking frame in his open-top E-type Jaguar and went to see the wig lady.  Brian told her he wanted a wig in the style of Rod Stewart’s hair and had to really persuade the lady that he was absolutely serious.  Eventually he found what he was looking for and we set off for home with Brian wearing his Rod Stewart wig.  He also had on his aviator glasses when the ruddy wig flew off and ended up in the middle of the A47, lying there looking like a dead bird.  I had to pull over on the hard-shoulder and walk back, dodging in and out of the traffic to rescue the wretched thing!  How we howled with laughter!

When we went to hospital for treatment, Brian would often roll out of the car and onto his hands and knees, again making me laugh with his black sense of humour.  But there were other times when all we could do was cry…

Brian knew he was going to die.  There were still lots of things he wanted to do, but he was at peace with himself, which was a huge comfort to me.  We used to sit together in the garden in the shade (because of the radiotherapy he couldn’t stay in the sun) and he would tell me everything he wanted me to do with the children and his businesses after he had gone.  He was an amazing man, even in the last year when he was dying.

Then one day, Brian collapsed.  I rang Raymond, a fabulous nurse who had helped look after my Dad when he had Parkinson’s, and he came to help, along with Brian’s sister, Tessa.  She was amazing – a real tower of strength.  I couldn’t have done it without her.

So many people came to visit it was exhausting, but it was wonderful to know how highly regarded he was.  Brian passed away at home surrounded by his family on 23rd September 2006.

He had a good life, had a lot of love to give, and to the end retained his great sense of humour.

When Brian became ill we discovered how ridiculously little funding there was for research into brain tumours and how many thousands of families were devastated by this dreadful disease each year.  It was so distressing that so little could be done for him and this spurred me, along with the children, to set up the Brian Cross Memorial Trust with a target of raising £1 million to help fund research into better treatments and ultimately a cure.  Already we have raised more than £750,000 and we are proud to attend the launch of the fourth Brain Tumour Research Centre of Excellence at Imperial College where we are donating £120,000 to fund a Research Nurse for three years. 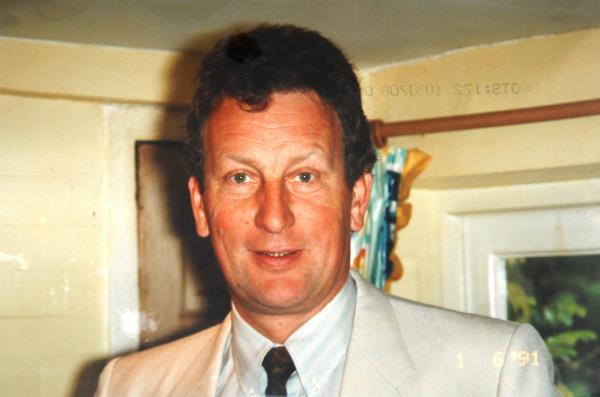