Diagnosed with a multifocal grade 4 glioblastoma multiforme (GBM) in December 2018, 71-year-old Bob Witherspoon from Whitley Bay lost his life to this aggressive brain tumour just four months later. At his funeral, rather than flowers, his family requested a collection for Brain Tumour Research. Having raised over £700 to help fund research to prevent other families from going through the pain they have suffered, they now want to raise awareness of this cruel disease, by sharing their heart-breaking experience.

I knew from early on in our marriage that Bob would never want to retire, that’s the sort of person he was. He’d been a sheet metal worker all his adult life and had worked his way up the ladder. Even after his brain tumour diagnosis at 70 years of age, he continued to work as a technical director in Computer Aided Design (CAD).

“It was a colleague who first started noticing a difference in him at work and then I began to detect a change in his behaviour at home.”

He would finish work at 4.30pm, come home and fall asleep straight away, before he’d had his tea. He would wake up two hours later, thinking he’d eaten, but he hadn’t. As he was getting more and more confused and fatigued, I thought it might be the early stages of Alzheimer’s. His memory was really suffering; on one occasion he went to see our cat in the bedroom when he came in from work. Minutes later he asked me where the cat was, having completely forgotten he’d just seen her.

The next thing was he started experiencing double vision. I was really worried about him driving so I encouraged him to go to the GP and before we knew it, he was being sent for an advanced eye test, CT scans and later an MRI scan. On 6 December 2018 we were given the most devastating news. Bob’s neurosurgeon, Mr Otto Major, ushered us into a private consultation room at the Royal Victoria Infirmary in Newcastle and told us that the tumour was a grade 4 multifocal glioblastoma multiforme (GBM). There was a sombre atmosphere in the room and I just knew it was bad news.

“They explained to us that the tumour was terminal and that, although they were going to press ahead with treatment, it could never be cured.”

We have three children together; Mark, 44, Victoria, 43, and Lucy, who recently turned 40. It was my responsibility to break this awful news to them. Bob, on the other hand, never wanted to discuss dying; he kept saying he was going to fight it but the tumour was just too aggressive. The appointment for a ten-day course of radiotherapy came quickly; he began the treatment just before Christmas, with a short break for the holidays and started again just before New Year. We did manage to enjoy our last Christmas altogether as a family. All the family came to us and Bob coped brilliantly. He asked for four kittens for his present! He didn’t get the kittens but he got three stuffed toy ones instead!

Aside from cats, Bob’s passion was his allotment, which he got eight years ago. He loved spending time down there tending to his courgettes, leeks, green beans and potatoes. His beetroot won first prize in the allotment society show in 2017! He had so much produce, he’d frequently give it to friends and family, or if they wouldn’t have it, he’d take it to our local foodbank.

In the New Year his condition began to deteriorate and his forgetfulness got a lot worse and he kept losing things. In spite of this, Bob continued to go to work, albeit part-time. Having had his driving license taken away he was now relying on others for lifts and had lost his sense of independence. On his days off we made the effort to go out together and do the things we would’ve enjoyed later in life, if he’d lived into his retirement. But even catching the bus into town to go for lunch became too much in the end and his coordination was going, making it difficult for him to walk even short distances.

“One day I found a note he’d written in his notebook that said, ‘there’s not much left of me now’. That was heart-breaking.”

We made our wills, something we’d never even thought about doing previously, and we talked about Bob’s wishes to be cremated. I never told Bob that he was going to die but I’m sure he knew. On the night Bob passed away he had been panicking all day and I knew we were losing him so I got the three kids round to be by his side. We spent the evening next to him, playing some of his favourite records; Fleetwood Mac, Steely Dan and Santana. We lit candles and had a drink together. At the end he just took three short breaths and then he was gone. He died on our youngest daughter’s 40th birthday. Before they took him, I insisted on washing him myself. Free from the cancer, he looked like his old self again.

Our marriage had its up and downs, like any marriage, but we had many happy times and Bob was a good dad and grandad and a tireless worker, providing for his family.

“I’m not bitter about his death; he lived to 71, which is a good age, but I am bitter about the fact that it happened so quickly.”

There is very little information out there about multifocal GBMs. It’s as if it’s an ‘unpopular cancer’. It’s the one everybody’s terrified about. I’ve learnt that research into brain tumours is severely underfunded. That’s why we collected for the Brain Tumour Research charity at his funeral, instead of asking for flowers. We did have a special fruit and vegetable wreath made, though. The allotment has now been handed to our future son-in-law, Paul, who’s taking care of it. Bob would’ve loved that. 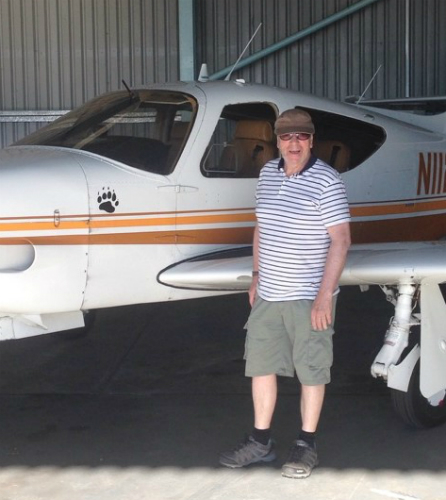