Bob shared his story with us in September 2016. Sadly, he passed away on 25th June 2019. We will remember Bob as we continue our work to raise awareness of this devastating disease and to fund research to help find a cure. He will be forever in our hearts.

A successful double bass player, Bob Picken has been a member of Liverpool band Ella Guru, as well as a backing for artists such as Neville Skelly, She Drew The Gun, Bill Ryder-Jones and Marvin Powell.

Diagnosed in 2012 with an anaplastic astrocytoma, whom he affectionately calls “Bieber” in reference to the Canadian singer Justin, Bob has managed to overcome a number of setbacks to carry on with his career, and in his own words “stick two fingers up to cancer”.

Before my diagnosis, I was a very active person. I had a job that I enjoyed at Blockbuster Entertainment, perfect for me as I was really passionate about film. I was also a keen runner and cyclist, but most importantly, I played my double bass Martha – named after my favourite Tom Waits song – in my own band Ella Guru and as backing for other artists.

In early 2012, I was in the studio with Neville Skelly, whom I had worked with previously on his album “Poet & The Dreamer”. We were recording his latest album, and I suddenly found myself unable to press down on the fretboard because my left arm felt weak. I took a few days off, but during that time my left leg also developed weakness and I started limping.  My GP referred me for an MRI scan.

On 5th May 2012, Arrowe Park Hospital in the Wirral found a “large homogenous enhancing tumour in the brain stem”.  I had another MRI at Walton Hospital, followed by a top-down biopsy through my head that confirmed a grade 3 anaplastic astrocytoma. Unfortunately, its position, involving the lower pons and medulla, meant that it was inoperable. My flatmate at the time, Ian, told me “we’ll fight this bastard”.

I was then referred to Clatterbridge Cancer Centre in the Wirral, under the care of Dr Haylock.  I underwent a month of radiotherapy, with the advice that I would experience tiredness, a lack of energy, a worsening of symptoms, and hair loss. Being bald anyway, my friends joked that perhaps my hair would grow back!  But I never lost my sense of humour, during one of my radiotherapy sessions, I decided to call my tumour “Bieber”, after the singer Justin Bieber, because I found it to be just as annoying as he is!

Alongside the radiotherapy, I was prescribed the steroid Dexamethasone. The side effects from this horrible drug is “moon face”, I looked like a mix between a fat Alan Partridge and Jabba the Hutt. I suffered stretch marks and dysphonia (difficulty speaking) but I had to keep positive as its job was to reduce swelling, which it did.

The radiotherapy was gruelling, I had no energy and took frequent naps. I also lost my appetite, but thankfully the steroids took care of that because they made me want to eat everything in sight. I remember once having a roast dinner at my sister-in-law’s, and not only eating my own food, but everyone else’s leftovers. I had to listen to my body, which was telling me to rest and eat.

I was overwhelmed with feelings of shock, and inevitably leaned on my girlfriend Laura for help. She researched everything she could about my tumour type, places I could go for a second opinion, dietary changes, everything. You go through five stages of cancer: denial, anger, bargaining, sadness and eventually acceptance.

As acceptance kicked in, my friends rallied around, as I’d had to stop working due to the radiotherapy. In June 2012, they came together and held a charity evening for me at the Coda Maine bar in Hoylake. Everyone I loved and cared about was there: Martin Moseley, Neville Skelly, The Sand Band, The Sundowners, and James Skelly, amongst others.

Shortly after, I found myself exhausted in bed and unable to breathe. The hospital found a number of blood clots in my lungs, and from that day on I have had to take blood thinners. I started with Tinzaparin, an unpleasant injectable, but am now on Warfarin pills permanently.

Christmas 2012 was not a happy time for me. In the previous seven months, I had been diagnosed with a brain tumour, endured radiotherapy, steroids and been prescribed permanent blood thinners, but now I started to get an irregular heartbeat. A normal resting heart rate is anywhere between 60 and 100, mine was 170. To get my heart working normally again, I was offered electrical cardioversion or drugs. Thankfully the drugs worked, and to date, I’ve not had any further heart issues. Around this time, I was also slowly weaned off the steroids.

After coming off steroids, I found myself unable to go back to jogging. One of the side effects was osteoporosis, so I had a crushing feeling in my lower back every time I tried to run. Thankfully, I was able to dust Martha, my double bass, off and start playing again.

In June 2013, my good friend Neville Skelly, along with Paul Speed of the venue Camp & Furnace and Dave Lewiston of Eighties Vinyl, organised another charity event for me. Neville said that “Bob has a lot to worry about, the one thing he shouldn’t worry about is money”. The event was called BobFest and it was incredible, local artists old and new turned out to help raise money. The list of artists on the bill that day included Ian Broudie of the Lightning Seeds, Space, Bill Ryder-Jones, Edgar Jones, The Merrylees, Bird and Sankofa, amongst others. I feel truly fortunate that my health was good enough that I was able to take to the stage myself with my former band member John Canning Yates (whom I played with in Ella Guru) and Paul Wilkes.

Slowly throughout the rest of the year, I concentrated on trying to get back to the way I played previously. For the most part I was successful, but due to the left-sided weakness my tumour had caused, my arm and hand don’t move as fast as they once did.

In June 2014 Laura and I got married.  We travelled to Loch Lomond in Scotland to marry at a beautiful venue called The Cruin. Laura did all the planning, I just dressed up in a kilt! She planned the most amazing day, not just for us, but for friends and family who had been through the last two years of hell with me. It was one of the happiest days of my life and I will never forget it. I believe that I am alive today because of Laura.

In September 2014, I felt well enough to work again and found a job at a hotel in Liverpool. My confidence had taken such a knock that it was not easy. At this time, I also started playing my double bass again professionally with local folk singer Marvin Powell, as well as signing up for an access course at Liverpool University.

Sadly, Laura and I have since split, but remain the best of friends.  I try to stay positive, but in the last year my health has taken a turn for the worse. My balance is terrible, I now have double vision and wear prism glasses, my hearing has gone in one ear, and the weakness has got worse on my left side. I have had to give up my job, and every gig that I play is a blessing, I honestly expect each one to be my last. I love being on stage, and really hope I can continue.

My most recent MRI showed that the tumour has remained the same. I am now concentrating on fighting “Bieber” with a healthy diet and other forms of palliative care. I know that I can’t cure it, but as my tumour is inoperable I have nothing to lose. My oncologist has brought up the subject of chemotherapy pills, so I’m looking to try them alongside other alternative treatments.

It is shocking that so much of brain tumour research and care has to rely on charities to raise the money and fund the fight. A cure needs to be found, because I don’t want others to go through what I am.

You can either give in, or stick two fingers up to cancer.  I continue my fight. 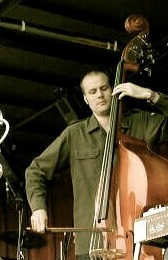