Life and soul of the party and adored grandma, Beverly Lawrence, died shortly after her 60th birthday in 2013. It was only two years after she retired and was, almost immediately, diagnosed with a grade four glioblastoma multiforme (GBM). Hayley Costa lost her mum Beverly just five days after she gave birth, horribly reminiscent of Beverly losing her own mother while pregnant with Hayley.

“She was away with the fairies a lot of the time. We were living some kind of black comedy. I remember her handing me imaginary tissues and I would have to take them. The next moment, she would snap back to herself, sobbing: “Look what’s happened to me!””
Here is Beverly’s story, as told by her daughter Hayley Costa…

Mum was my best friend. We are both fiery with similar strong personalities so we had a tempestuous relationship, but everyone adored her. She was vivacious and beautiful; the life and soul of the party. Yet, she always thought she would die young as both her mother and grandmother had.

My grandmother had died of cancer when Mum was pregnant with me so mortality played on her mind constantly. She always worked hard, building up her catering business in Cardiff while caring for her three children. Mum’s philosophy was “you’re a long time dead so get on with life”. As her grandchildren started to come along, I had two at that stage, as did my brother, she wanted to spend more time with them. Mum retired in the spring of 2011 when she was 58.

It didn’t take long before symptoms started to appear. She started behaving strangely over the summer. She felt sick, had a metallic taste in her mouth and an odd lump on her arm which meant she couldn’t lift things. Weirdly, Mum said she could hear the theme music from Emmerdale coming out of the freezer! The GP referred her to a neurologist.

I was living in London with my family and Mum didn’t want to talk much about it. She was really sketchy about the details, so it wasn’t until my younger brother called me from Cardiff that I understood how serious it was. She had an MRI which revealed a grade four glioblastoma multiforme (GBM), one of the most aggressive forms of brain tumour. She had surgery in August and then six weeks of chemotherapy and radiotherapy.

Mum didn’t have the most sensitive consultant. He was very matter-of-fact about her prognosis with a GBM and didn’t hold out any hope that she might survive it. His explanation was: “If you play on the M1, sooner or later you will get hit”. Mum actually threw up at that

With her usual spirit, having finished her chemo and radiotherapy, she picked herself up again and jumped on a plane to Hong Kong to visit my older brother and her adored grandsons. She was so determined to prove that she could defy all the odds. Mum and my Dad, Ray, wanted to live life as fully as they could after the news, going on holidays to Las Vegas and Cyprus. We were all right behind her, telling her we would deal with everything in her path and that she was not a statistic.

It was incredibly hard. Mum would follow various brain tumour online support groups and get so upset whenever someone died. Life went on like this until June 2012. Mum collapsed with her first major seizure. She was terrified, unable to speak, and scrawled out a note to my Dad asking if she was having a stroke. She was rushed into hospital and an MRI showed that the tumour was back. Soon afterwards, it was Mum’s 59th birthday and her dad’s 90th on the same day. It felt wrong and depressing that Mum should be so ill.

Mum was acting very distant. She was clearly upset, but quiet and almost vacant. Her consultant didn’t think they should operate but by this time I had lost a bit of faith in him. I arranged for Mum to be treated in London, starting a course of the drug Avastin. It was a low point. Mum had lost her driving license and her independence along with it. She hated that. She would look up at the stairs as if they were a mountain. In August we had a joint family birthday party for two of her grandchildren. As the Spiderman and Princess cakes were brought in, Mum had to leave the room. She didn’t want them to see her crying but she knew it was the last birthday of theirs that she would see. She loved her grandchildren more than anything.

By November 2012, Mum was feeling a bit more positive. I had just become pregnant with our third child and Mum was so pleased. It gave her something to live for: to meet the baby, which was due in July, and celebrate her 60th birthday in June. She wasn’t sure that she would actually survive that long though, convincing me to let her talk privately with my doctor so she could discover the sex of the baby without me having to know.

Mum was getting weaker and weaker. One day she was visiting us with Dad, trying to make it from the car to our front door, but collapsing on the doorstep. We tried to shield my girls Madison and Liberty, who were just four and two, from the worst of it. It was confusing for them. Mentally too she was different, away with the fairies a lot of the time. We were living some kind of black comedy. I remember her handing me imaginary tissues and I would have to take them. The next moment, she would snap back to herself, sobbing: “Look what’s happened to me!” She wanted to go out with a bang, not a whimper, that wasn’t her.

She was a private woman and now she was having to have a full-time carer, a stair-lift and a hospital bed. It was humiliating for her and absolutely heartbreaking for us all. Even her home had become unrecognisable. Her 60th birthday in June passed with just immediate family around her. She didn’t really want to see anyone else and she wasn’t with it anymore. Mum found it too much to go into hospital for her Avastin treatment and she was too ill to be considered for any trials. She just slept all the time.

We sang Happy Birthday and she retreated upstairs, never to come down again. As she left, I called out: “I’ll have a grandchild for you the next time I see you!” and she gave me the double thumbs up. It was the last time Madison and Liberty saw her. I was desperate for her to be able to meet my baby so I went in to be examined urgently. Luckily, as it was my third child, things were already progressing and the doctor was happy to induce me 10 days before my due date.

It is Jewish tradition to honour the dead by naming new babies with the same initial. I had already told Mum that we would call the baby Bradley if he was a boy, and of course, she was the only one in the family who knew what I was having. I found it comforting that she had this knowledge before she started to fade. We sent her his picture as soon as he was born and her last words were: “He’s lovely.” Incredibly, my grandfather then told us that Bradley was the name that he and my grandmother had chosen for my Mum if she had been a boy.

The week after the birth was a crazy blur. I had a newborn and a dying mother plus I had planned a birthday party for my daughter in two days’ time. The date had been chosen much earlier, when we thought the baby would come on time. Bradley was 24 hours old and I was frantically buying party stuff. I phoned Dad halfway through the party and he broke the news that he didn’t think Mum would last the night. I took a deep breath and then had to carry in the birthday cake to a room full of excited children singing Happy Birthday. As the guests were leaving, I remember one mum saying: “I can’t believe you had a baby two days ago.” I hardly knew her but it was too much. I just sobbed “My mum’s about to die!” and she hugged me in complete shock.

I don’t remember packing nappies or anything, we just scooped up the baby and drove to Cardiff to be with Mum. As soon as we arrived at Mum’s, we placed baby Bradley in her arms. A tear ran down her cheek and we all felt emotional. It was such a serene and beautiful moment. He stayed there virtually the whole day, being very calm and quiet for a newborn.

There were signs that Mum was very close to death. She developed a strange cough that the carers recognised as something they had seen before in dying patients immediately before they passed away. By 11pm on 7th July 2013, I had the sudden urge to not be there anymore. The carer had come back, which was very unusual as they normally left for the night once they had settled her for the evening. I told my husband Rick: “I’ve watched her dying, I can’t watch her die. She wouldn’t want that.”

Other members of my family stayed with her. The phone rang at midnight calling me back and when we returned, I just knew she had gone. She looked so peaceful. Then it all starts, of course, the funeral arrangements and telling people. My new mum hormones were also peaking, so it was just terrible. I was grateful that she hung on to meet Bradley. Their worlds’ crossed and that’s been incredibly important to me. I needed that, or I would have been even more of a mess.

Mum loved Barry Manilow so we had “Can’t smile without you” on her stone and we played “The Hustle” at her funeral, as she would have wanted. We try to keep her memory alive for the children. Madison remembers her and gets upset, while Liberty is a carbon copy of my mum. It’s particularly tough on Dad; they had been married for nearly 40 years. Mum had been worried about how he would cope after she’d gone, saying “he must meet someone, it’s very important.”

Four or five years ago, all this was alien to me. Brain tumours aren’t something people talk about. It’s so upsetting and frustrating to find out that brain tumours kill more children and adults under the age of 40 than any other cancer, yet just 1% of the national spend on cancer research has been allocated to this devastating disease. I remember Mum crying at my kitchen table one day, saying: “I’m finding this gruelling, imagine how it must be for a child?” She was so brave all through her illness. I miss her so much. 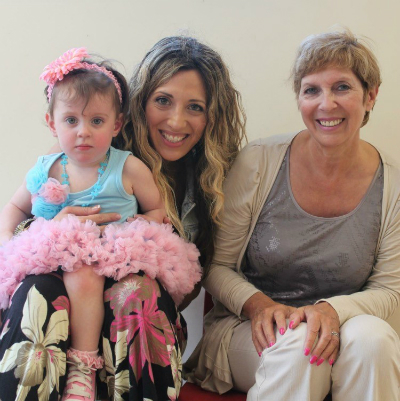