Ben Whitehouse was travelling on a train with his girlfriend Rachel when he suffered a severe seizure. He was taken straight to hospital where he was diagnosed with a high- grade glioblastoma brain tumour. The couple were married in Hampshire in April 2012 and just days after they returned from honeymoon in Cambodia, Ben became ill once more. He passed away three years after his diagnosis. He was 34.

“We had been married for just 15 months when Ben died. I never imagined that after such a short time I would be on my own. In those last few weeks when he was so ill we talked a lot. He deteriorated so fast but I kept talking to him although I don’t know how much he understood or even heard. Life is still hard but at least we had the chance to say goodbye.”

Ben and I met on the first night of freshers’ week and he was about as shy as I was. It was October 1998 and I was at Exeter to study biology and Ben was doing an English degree. It was a very exciting time; I had been a boarder at a girls’ school in Oxfordshire and suddenly there I was at university and these things called men were on the scene.

Ben was quiet; he was in the background of things and very good looking. At 5’ 8” he wasn’t tall, but he was dark and handsome. He loved the arts, DIY and trying new hobbies. He was a bad student but he was very clever and didn’t have to work very hard to get good grades. We were in the same group of friends throughout university and many of us are still in touch now.

We all graduated and went our separate ways. I was studying at the Royal Veterinary College and Ben, who had always had an interest in buildings and construction, had enrolled in a surveying course. We were both in London, I was living in a flat in Tower Hill and Ben was with his parents, David a retired QC and Linda a former teacher in Brook Green, Hammersmith. He was their only child.

We finally got together at a Halloween party in 2001 and the spark which had always been between us ignited. He was exciting, always up for a laugh and we had lots of things in common. I loved Cornwall and he loved Dorset and had spent three years there helping to renovate his parents’ holiday home in Worth Matravers.

We continued as girlfriend and boyfriend and by 2010 I was living in Canterbury. In March, Ben and I had been in London for his mother’s birthday. He told me he was feeling strange and being sick and I suggested he come back with me to Kent for a couple of days. He had a seizure on the train. It was horrendous; he started shaking, foaming at the mouth and going rigid. He was slipping from his train seat under the table and I screamed for help. It had come out of the blue and was very violent. Some people, I think it must have been the guards as the train was quite empty, came to help and the train pulled into Bromley where an ambulance was waiting.

Ben was taken to hospital and I had to call his father to tell him where we were and what had happened. It was the most terrifying phone call I have ever had to make. Ben was admitted for about a week. Although I had the support of my parents, I was terrified.

Ben went back to his parents to convalesce and he told me he had a glioblastoma brain tumour. It was inoperable and he would need a biopsy to determine whether it was grade three or four. He was very straight forward about things and didn’t really let it bother him. Things like death had never scared him and his attitude was that he would get through it. There was never any question that he would just give up.

I was still badly shocked and a complete mess for days. I barely ate or drank and was having flashbacks to the time on the train. I continued to work, operating on automatic, and visit him every few days. It was spring and I remember there was cherry blossom on the trees as we walked along the road which was as much as he could do. He was on anti-seizure medication which affected his mood and huge doses of steroids which began to take their toll.

As I wasn’t his next of kin, I was relying very much on second hand information. He was being very positive and we would talk for hours on the phone everyday as we had throughout our relationship.

In the summer Ben had a biopsy. It was a significant procedure as he was given a general anaesthetic and a flap was cut in his skull so the tumour could be accessed. The wound was stapled together and Ben was discharged. He was frustrated and angry at what he saw as the incompetent administration of the NHS so much so that, when he was told there was no nurse to remove the staples despite him having an appointment for the procedure, he took them out himself. He wrote on his blog: “I got a tool out and took eight metal clips out of my head. It took five minutes and didn’t even hurt much. The medical treatment on the NHS is amazing. The administration of that treatment is amazingly bad.”

Ben started radiotherapy. Every day for six weeks he would walk from the school where he was studying the Alexander technique across Waterloo Bridge to have his treatment and then go back to his classes. He lost some hair in three places and insisted on dying the pieces which remained pink and growing them so they were long and straggly. It looked awful but I guess it was just him making a statement about his cancer. Despite the treatment and the tiredness he was still very much himself and remained so until the very end, thank God, although he was exhausted and felt very low.

Ben was very selfless and, during his treatment, he split up with me. It was grim; he wanted me to get on with my life and to do the things I wanted to do. But, within weeks, we were talking again. We had a wonderful weekend together in Dorset and went to an RNLI boatbuilding event in Swanage.

As if Ben’s diagnosis hadn’t been enough, I was made redundant the same day. It was hideous. I decided to use some of my time to visit my younger sister Camilla in New Zealand. Ben told me he was going to visit my parents in Hampshire to tell them we were back together and everything was fine. In fact, he was going to ask if he could marry me. He kept his secret until the morning I started a new job. It was 18th July 2011 and he came with me to my new office. As we said goodbye outside, he got down on one knee asked me to marry him. It was very romantic and not very romantic at the same time. I squealed and said yes while he skipped off down the road.

We were married in April the following year on the Leckford Estate in Hampshire where my father was General Manager. It was a beautiful day, the pink hair had gone, and I just remember smiling all day because I was so happy.

Ben surprised me with a wonderful honeymoon in Cambodia and while we were away he seemed fit and healthy and we didn’t think about his illness but just a few short days after we returned he became unwell. He was sleeping for most of the day and had to take drugs for sickness. We were given the opportunity to live at a relative’s house in Bristol and Ben’s care was transferred from London.

Scans showed the tumour had returned and it seemed as if Ben was on endless chemo. But still we were very positive. We managed to go away to the Isle of Wight for the weekend and had lots of people to stay and threw dinner parties. We were trying to carry on as normal and to make the most of being normal. I never really believed it would come to an end. Ben was exceptionally good at preparing me and made it very clear if he were to go the next day I should be out meeting new people and carrying on with my life.

People thought we were mad as we carried on as if nothing was wrong. We bought a house in Pilning near Bristol and set about turning it into our home. We were two practical people and it just seemed the right thing to do. But things were far from normal and scans revealed there was another tumour. After that, everything happened very quickly. For the last two weeks of his life Ben was bedbound and progressively non-responsive. He hated hospitals and remained at home where I could look after him. He slept in his own bed and I was there with him.

We had been married for just 15 months when Ben died. I never imagined that after such a short time I would be on my own. In those last few weeks when he was so ill we talked a lot. He deteriorated so fast but I kept talking although I don’t know how much he understood or even heard. Life is still hard but at least we had the chance to say goodbye. 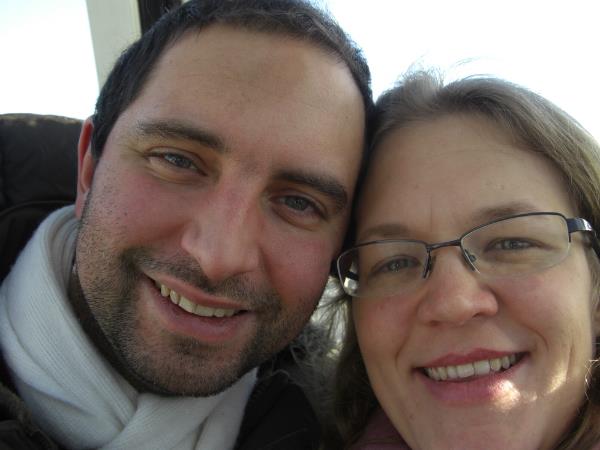