Becky had been suffering with increasingly bad headaches and then vomiting for about 3 months and it was starting to get worse.  The doctors missed the signs and failed to diagnose a brain tumour, but I don’t blame them.  The outcome would have been the same.

Eventually in May 2009 she collapsed and was taken to hospital where a scan indicated a brain tumour.  We were given the official diagnosis on Becky’s 39th birthday – 28th May.  She had a glioblastoma multiforme with a prognosis of 12 to 14 months.  The neuro-surgeon was unable to get the entire tumour out and said that it was the most aggressive one he had ever seen

Post operational, Becky was very well for about eight months, climbing a mountain in August and enjoying skiing at Christmas.  She continued to sing and performed at the Royal Concert Hall in Nottingham with Sing Live! During those months we lived in exactly the same way as before.  It was a period of normality even though Becky knew she was going to die, but not when and she didn’t want to know either.

Becky was keen to return to her work as an infant school teacher and did so towards the end of 2009. In January 2010, however, things started to take a turn for the worse.  Her tumour grew rapidly and Becky had times of forgetfulness and general awareness and lost some feeling in her right arm and right leg temporarily.  She was also starting to struggle to go up and down stairs.

We holidayed again as a family in February but this time Becky wasn’t up to skiing although she was still capable of some strenuous walking. Our Oncologist really fought for Becky and got the go ahead to put her on a one-off daily Temozolomide (TMZ) protocol (following The Temozolomide Rescue Study).

In March Becky had three massive seizures and lost two or three days entirely.  I now had to help her go upstairs, wash and dress her.  There were some personality changes, but nothing major.  She did seem to get more irate with the children however.

The TMZ protocol ‘held’ the tumour and it didn’t progress again, however the continual dose of chemo and additional steroids continued to have their effect on Beck’s body. This, coupled with the tumour, contributed to further decline in her well being.

Friends would ask what they could do to help and Becky would answer “nothing”.

I only once saw Becky cry and that was when a scan showed the tumour had grown from the size of a kidney bean to the size of a grape.

Then she had a very big seizure and we knew that the end was near.  She went into a hospice for the last couple of weeks.  Over the first few days I didn’t take the children in with me to visit, but when I did, I believe that, having seen them for the last time, Becky just switched herself off.

When Becky died I was glad she didn’t suffer much, even at the end, apart from the muscle pain which they tried to keep under control with painkillers.

I had kept the children in the picture by telling them “I don’t know whether Mummy will get better.”  Only about three weeks before the end did I tell them “She is going to die” – simply the hardest thing I’ve ever had to do.  The youngest has been quite matter of fact about his mother’s death, but the older two have been a bit more emotional.

When I look back and think of Becky I can only smile - I have no regrets.  We had 20 brilliant years together and we only ever had three big arguments.  I look back at the happy times that we had together and carry on.  I look to the future in a positive frame of mind as I move forward with the children.

My attitude is “we were dealt a shit hand and we played it as best we could”.  I knew almost certainly she was going to die.  We had said our goodbyes some time before she died, so when she did go it was something of a relief.  How she was and how she looked had changed so much.  Her face was bloated and she was not the beautiful woman she once was and more importantly, personality-wise she had changed from the wonderful person I had married.

We didn’t have a funeral, but a celebration of her life with 100 of her friends.  We talked about Becky, laughed about stories in her life, played her favourite music and shared photos of her in the hotel where we had had our wedding reception 17 years before.  It was very nice and relaxed and seemed the right thing to do – to celebrate her life and not think about her death.

After Becky’s diagnosis I had trawled the internet for information about brain tumours and discovered how clever they are in the way that they consistently stubbornly refuse to respond to treatment.  In all the brain tumour studies and 100s of clinical trials no one is saying that they have found a cure, just ways of slowing their progression.  That is why I am dedicated to helping raise funds for brain tumour research in the hope that one day a cure may be found. 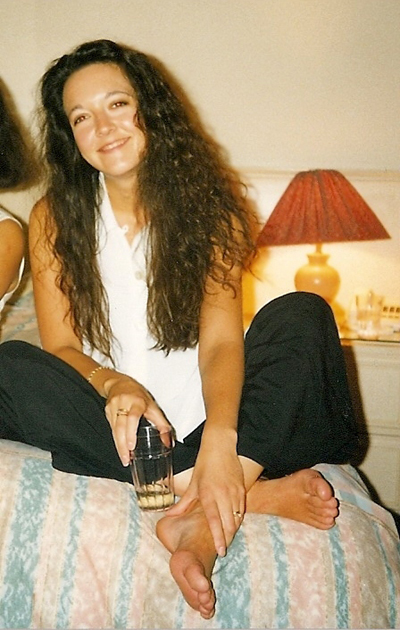