Diagnosed with a brain tumour at the age of 23, Anna Swabey was intitally given just months to live. Under the care of neurosurgeon Kevin O’Neill, who leads the Brain Tumour Research Centre of Excellence at Imperial College, London, Anna had surgery and treatment. She also got engaged and shared her experiences through her blog Inside My Head. Anna passed away on 16th September 2016, the day before she was due to marry.


“I am fortunate in that I don’t feel my illness dictates my life and while I am most definitely the same person, I even feel as if I am a better person for it. I know this may sound odd but my diagnosis has made me view my life differently and the way I am choosing to live now leaves me feeling fulfilled. I love knowing that I can make a difference, and, potentially help others.”

It is very strange to think that I was doing something as ordinary as putting my make-up on and getting ready to go out to the pub with friends when my life changed forever.
I have little memory of that evening but later found out that I had a seizure and hit my head as I collapsed on the floor. It was my housemate who found me and called an ambulance which took me to hospital in Portsmouth. Because it was the weekend, I was transferred to Southampton General Hospital for an MRI scan.

I was told that I had “something” on my brain and later, when mum and dad were with me, I discovered that this “something” was a tumour. We were in a family room on the ward when a doctor, accompanied by an oncology nurse, broke the news. I knew nothing about brain tumours and didn’t even know what “oncology” meant. The seizure had really knocked me for six and, to be honest, I don’t even think I knew what was going on, let alone how serious and life-changing it was.

I had graduated with a first class degree in languages and European studies from the University of Portsmouth in 2013 and was working at the city’s Gunwharf Quays designer outlet in a customer service role. I was looking forward to helping to develop the tourism strategy there and learning Mandarin. I was ambitious and young with high hopes for the future but the events of January 9th 2015 saw my life turn in a direction I could never have imagined.

I underwent psychometric tests to see if the seizure had affected my brain and was told I would need a biopsy to determine what type of tumour I had. I was awake throughout the procedure and it was probably the most surreal experience of my life.

Although anaesthetised, I remained fully awake as the surgeon drilled through my skull. It was a petrifying experience although I was reassured by the fact that I could talk and everything seemed to be ok. Unbelievably, I was out of hospital the same day.
The week we spent waiting for the results was the worst week of my life, even worse than the day I found out about my diagnosis. I was facing the unknown and trying very hard not to search on Google because I knew that wouldn’t help.

We returned to hospital for the results on the 3rd February. I think I knew straight away that the news was very bad as I could sense something from the atmosphere in the room where we met a doctor and a Macmillan nurse. The biopsy had confirmed my tumour was an inoperable grade 3 anaplastic astrocytoma and I may have had as little as a few months to live, probably three years at the most. At that point I just shut off what was going on around me and burst into tears. The news was so much worse than we had imagined.

How could this be happening? I was 23, fit and healthy, and with my whole life ahead of me. I was devastated and felt angry because, ten years earlier, a small lesion had been found on my brain but we were told it was nothing to worry about. I wondered if things might have been different if it had been caught earlier. In hindsight, I was glad I didn’t find out as at least this way I had lived the life of a normal teenager.

Two days later I was with consultant neurosurgeon Kevin O’Neill at Charing Cross Hospital, London. Kevin told me that he thought the prognosis of as little as a few months was unnecessarily bleak and that the average life expectancy for someone with this tumour type was three years. Kevin had so much passion for his subject and, although he didn’t change my diagnosis, he did give me hope. There were things we could try and I left his office in tears of happiness. Kevin came across as a pioneer in his field, I was young, he was determined and we were going to fight this together.

On 17th March I underwent a craniotomy under general anaesthetic. I was more anxious about this than the biopsy and the thing that scared me most was that I might never wake up. The position of my tumour meant that part of it remained completely inoperable but Kevin managed to remove about 3cm x 4cm of it. The tumour hadn’t gone, it would grow again, but at least now I was unlikely to suffer from as many seizures. I was very ill after surgery. There was a drain in my head and I had severe vomiting. It was very tough on my family to see me so poorly having gone through major surgery. After a couple of days I felt much better and was discharged. I was extremely tired, more so than I thought was possible and, looking back, that operation now feels like a lifetime ago.

By the end of April, I started chemotherapy. My parents and I stayed in Hertfordshire as I travelled to Charing Cross Monday to Friday for seven weeks. At the same time I also took the chemotherapy drug Temozolomide each day. I tried to prepare myself for the inevitable side effects of losing my hair and sickness. On day one I was really poorly but after the first two or three weeks, things eased off and then, towards the end, I felt so horrifically tired that I was no longer able to take the train and we would drive in every day.

My hair started to fall out and I tried to put off washing it as I didn’t want to see big clumps coming off. Although I was proud of my thick, long hair, losing it wasn’t a big deal to me – in the grand scheme of things it didn’t feel that important. I have a couple of wigs and would be happy to live with no hair for the rest of my life than give in to this tumour.

I finished my radiotherapy and chemotherapy in June and had another scan in July. The news was a bitter blow. The tumour had grown significantly. I had been through all that treatment and, not only had it not been effective, but things were worse than ever. That was really hard to take. There was a follow up perfusion scan to look at the blood flow to the tumour which seemed to indicate that, rather than new growth, the change in the tumour was a result of swelling caused by the treatment. I was slightly relieved to hear that but hesitant to believe it and now await my next scan on 4th January 2016.

The month after I was diagnosed I started my blog, Inside My Head. To start with it was a way of expressing my thoughts and feelings which I thought would help me cope with things. I also wanted to support others who may be experiencing a similar battle and I thought that even if just one person reads one post, and can relate to my situation and it makes them feel less alone, I will view it as a success. Before my diagnosis I knew nothing about brain tumours and now, after discovering this devastating illness kills more children and adults under the age of 40 I want to do all I can to see that it receives more than just 1% of the national spend on cancer research.

My hope is that the work I am doing will help not only my own prognosis, but other people’s so that, in future, others won’t have to experience this journey at all.
I am fortunate to have a very close family and have had great support from my parents Linda and Keith and my older siblings Matthew and Victoria. Thanks to them – and my wonderful fiancé Andrew, who came into my life after my diagnosis – I am just “Anna” rather than “Anna with a brain tumour.” I am fortunate in that I don’t feel my illness dictates my life and while I am most definitely the same person I feel as if I am a better person for it. I know this may sound odd but my diagnosis has made me view my life differently and the way I am choosing to live now leaves me feeling fulfilled. I love knowing that I can make a difference, and, potentially help others.

We are looking at getting married in October and that is very exciting. And babies?

Having children had always been in my future life plans but I have been told my treatment is likely to make me infertile. To be honest, with an average prognosis of three years, I don’t think I would want to bring a child into the world knowing I will not be here to see it grow up. My English springer spaniel puppy Enid keeps me busy and she is my baby, for now at least. 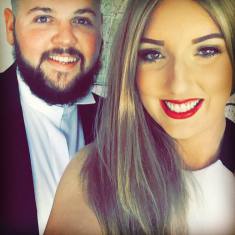