Andy Watts was 54 and living in Ipswich, Suffolk, when he was diagnosed with a glioblastoma multiforme (GBM) following surgery which included signing up to take part in a trial of 5-ALA, the “pink drink”. A positive and upbeat person, Andy tried to jolly his family along with jokes. Although his loved ones knew his tumour was incurable and terminal, nothing could prepare them for the fact they lost him just over five months later.

Here is Andy’s story, as told by his daughter, Kathryn …

Dad was a vibrant, outgoing person and really did live for those he loved, particularly his wife – my mum Shirley - my brother Philip and me. He was very kind and generous, a real diamond. You couldn’t keep him still – he was always so active.

Dad also loved his cars and was a delivery driver most of his life. He hadn’t long started working in a new role within the East of England Co-op when he started feeling under the weather.

“He wasn’t suffering with headaches or fits, but was feeling more and more overwhelmed with anxiety. He had begun to dread going out and seeing people, which was not like him at all.”

He also was experiencing a few spatial awareness issues and when the weather was warm, he would feel cold and vice versa.

Dad saw the GP who, after a few routine tests, checked his thyroid.

When the tests came back negative, the GP thought that maybe Dad was suffering a male menopause.

A few weeks later, having driven home from work, we found Dad slumped in the car. My brother managed to get him inside, but Dad’s speech was slurred, he was very hot and dehydrated.

Mum took him to A&E and, when she came to collect me from work, told me that they had found something in Dad’s brain which could either be an abscess or a tumour. Never in a million years did we think that was what we would be told.

He was transferred to Addenbrooke’s that night ready for a further scan the following morning, which is when they confirmed it was a brain tumour.

“It was a huge shock for us all, but Dad took the terrible news calmly and was really positive and courageous. He kept saying: ‘I am glad it’s me and not one of you!’ He always put others before himself.”

As it was a Friday, Dad was allowed to go home for the weekend but had to return to Addenbrooke’s on Sunday night ready for his operation the following day. He was signed up by his neurosurgeon Mr Colin Watts to trial the chemical 5-AminoLevulinic Acid, known as 5-ALA (or the pink drink), a fluorescent dye which makes cancerous cells glow pink during surgery, thus facilitating removal only of cancerous tissue.

We were all so happy Dad was able to take part in the trial. He felt like he was doing something really positive and even though it didn’t change the outcome for him, we are proud he was part of something which is going to help others. We know it would mean the world to him too. 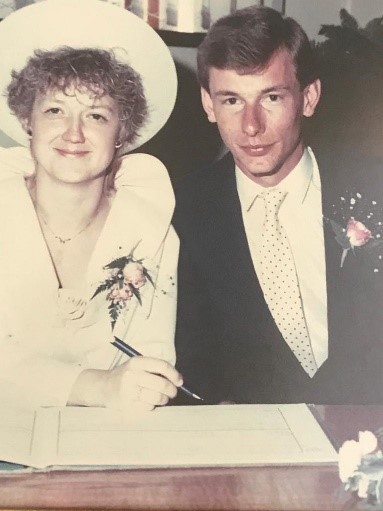 Dad was taken to the operating theatre at midday and didn’t return until 11.30 at night. It was horrific waiting for him. We had been told he would be in surgery for three to four hours so we really started to panic as the hours went agonisingly by. It was also compounded by the fact that the operation took place on Mum and Dad’s 28th wedding anniversary.

When we visited the following day, Dad was hunched over in a chair and looked incredibly vulnerable. Later we were told that, although the surgery had gone well, it had been complicated as the tumour had healthy tissue wrapped around it so they couldn’t remove it completely. Unfortunately, it soon became clear that surgery had affected the left side of his sight in both eyes, as well as his spatial awareness and he was struggling to find his words.

Later that day, we were told to prepare ourselves for the news that the tumour would most likely be confirmed as high-grade, although the doctors were still waiting for the results from histology.

Dad was discharged on Wednesday evening, much to our surprise. That weekend we celebrated his 55th birthday.

Two weeks later at an outpatients’ appointment, we were told that the tumour was a glioblastoma multiforme (GBM), that it was very aggressive and the worst it could be. During the appointment, the neurosurgeon spoke via video link to the consultant at Ipswich Hospital and discussed the combined chemotherapy and radiotherapy treatment that Dad would need. We were told that Dad was looking at a survival prognosis of four to five years at best or, at worst, just a year.

“Dad created a bucket of positive thoughts and when he felt bad, he would grab a positive thought. He would say: ‘I’m glad it’s me and no one else. I’ll take this for you’.”

When family or friends visited, if they got upset, he would offer them the chance to dip into his bucket of positive thoughts with him. 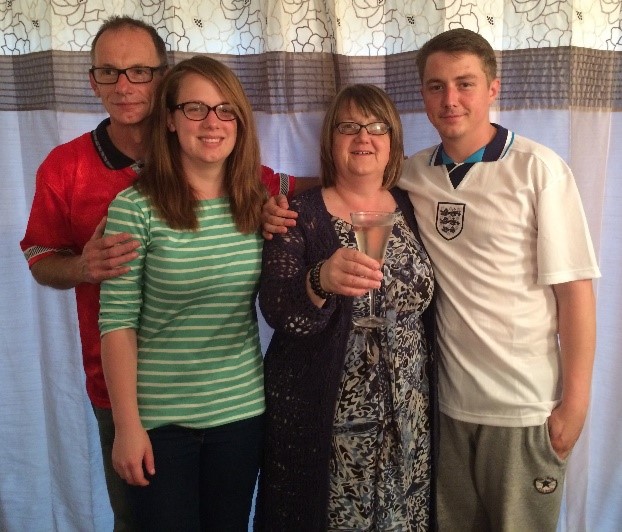 A couple of weeks later, when his scar had healed nicely, Dad started his treatment. It appeared to be going fairly well, although Dad went through hell. During the fifth week out of what should have been six weeks of chemo-radiotherapy, Dad was hospitalised because he was vomiting a lot. The doctors put it down to dehydration, which is a common side-effect of the combined treatments. Later he came home and the treatment resumed.

The day before his final session, Dad’s legs gave way and he couldn’t get up again. Mum called an ambulance and he was taken into hospital. He was scanned the following day and we were heart-broken to learn that, despite Dad courageously putting up with such gruelling treatment, it hadn’t worked – the tumour had been growing all the way through.

“The first person to break the horrible silence, after the consultant left, was Dad. He joked: ‘At least you can use my Co-op staff discount on my funeral!’.”

Although the news was incredibly hard to comprehend, looking back his attitude still amazes me. He was still joking and trying to jolly us along, and saying: “I’m glad it’s me and no one else. I’ll take this for you.”

Dad was moved up to Somersham Ward, where he remained for three weeks, before being transferred to St Elizabeth Hospice in Ipswich. By then he couldn’t move from the waist downwards, his core balance had shifted, he was doubly incontinent and his eye sight was failing. His speech, which had improved following his craniotomy, started deteriorating once more.

When he first went into the hospice, we were told Dad could stay for a maximum of 23 days. In the event, he was still fighting on at the end of the maximum period, but by this point he was becoming increasingly agitated, confused and could no longer comprehend what was going on around him.  We had to fight to keep him in the hospice, where we couldn’t have asked for better care for him.

“We had heart-breaking conversations with him about how much he was going to miss us, let alone how we would miss him. He told us to sell his car to help us financially and was desperate to get everything sorted, including who would benefit from funeral donations.”

In the end, Dad decided he wanted them to be split between Somersham Ward at Ipswich Hospital and Brain Tumour Research.

Dad passed away on 27 November 2017, just five months and five days after his diagnosis, nearly seven weeks after being admitted to St Elizabeth and just 12 weeks after becoming a Grandpops for the first time to my son Henry. 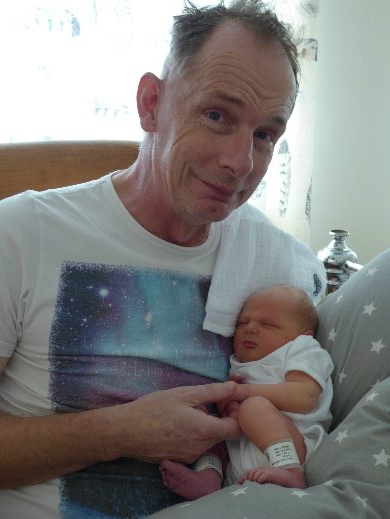 Dad was always such a positive person and remained brave throughout his treatment. We try to take his courage with us and draw strength from it.

To mark the first anniversary of losing Dad, having raised over £3,000 for Brain Tumour Research, we went to the Centre of Excellence at Queen Mary University of London to put up a tile in Dad’s memory. It was a special, if emotional, day with quite a few tears shed at the Wall of Hope. 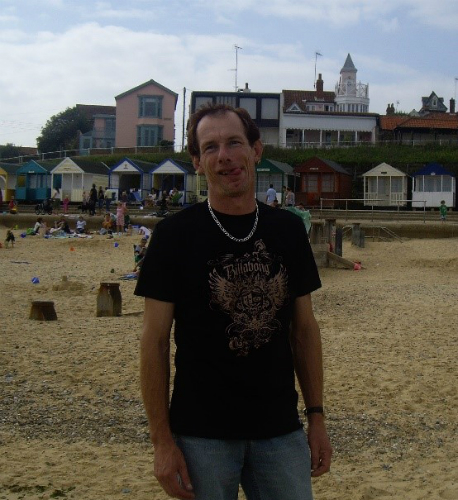