In just 18 months, Andy Graham’s life had changed beyond recognition. The 52-year-old was diagnosed with a low-grade haemangioblastoma and, despite surgery and treatment, he suffered unimaginable trauma and distress as the tumour continued to grow. Leaving behind his wife and two sons, Andy sadly passed away on New Year’s Eve 2017.

“When the operation finally went ahead in August, Andy’s ordeal didn’t stop there. He was in theatre for 11 hours and I received a call from the surgeon saying ‘if I carry on I’m going to kill him.’ They had only touched the tumour and so much blood flowed that they spent hours mopping it up. Andy had psyched himself up for this surgery for so long and it had been a disaster.”

Here is Andy’s story, as told by his wife Gill …

When Andy and I built our new family home in 2013, I imagined us both spending retirement there together. I didn’t imagine that our sons Oliver and Dan and I would be starting 2018 without him.

Andy worked as a camera expert at John Lewis in High Wycombe; he’d worked there for 29 years and still loved his job, and his colleagues and customers loved him too. He would chat to anyone and everyone and could happily spend hours on the shop floor talking about cameras and the latest technology.

Between January and April 2016, Andy started having dizzy spells and there were a couple of occasions when I had to pick him up from work because he didn’t feel fit to drive. Neither of us thought much of it but the dizziness gradually got worse and he started experiencing what we thought was vertigo. I remember one day he was hanging off the door frame at home, yelling that he was falling.

He was given medication and the symptoms did stop for a while. For the Easter break, we were taking our sons, aged 11 and 12 at the time, to Tenerife but the day before we were due to fly, Andy fell ill at work and went to the doctors. He was given more medication for an inner ear infection and, other than slight dizziness, Andy had no further symptoms while we were away.

When we returned, however, Andy was sent for an MRI scan to check why his ear infection wasn’t clearing up. It was only a routine scan in order for Andy to be seen by an ear, nose and throat specialist, so neither of us thought much of it.

Just one hour after the scan, however, the doctors’ surgery called us back in and I remember saying to Andy, ‘they’re calling you back so quickly, this can’t be good.’ And it wasn’t: there was a large shadow clouding Andy’s brain. He was told to stop driving immediately and, reeling from what we’d just seen, we were sent home to wait for an appointment at John Radcliffe hospital in Oxford.

The day Andy waited for so anxiously finally came around and he was diagnosed with a haemangioblastoma brain tumour – it was ‘benign’, the consultant said, but in a dangerous location on the brain stem which would make surgery difficult. Despite the complications involved, surgery was Andy’s only option.

The month that followed was horrific. Andy went into hospital four times for his operation and each time it was cancelled. Each time Andy went nil-by-mouth for the operation, and they would even go through the rigmarole of wheeling him down to theatre and washing him ready for surgery. Yet every time, the operation couldn’t go ahead because of a shortage of beds in intensive care. I would feel sick when I saw the consultant walking around the corner to tell us yet again that surgery wasn’t happening.

When the operation finally went ahead in August, Andy’s ordeal didn’t stop there. He was in theatre for 11 hours and I received a call from the surgeon saying ‘if I carry on I’m going to kill him.’ They had only touched the tumour and so much blood flowed that they spent hours mopping it up. Andy had psyched himself up for this surgery for so long and it had been a disaster.

It was horrible seeing Andy wake up a few days later in intensive care, he was a mess. They moved him to the high dependency ward where he stayed for a few weeks. Meanwhile I was still working full-time and driving to and from the hospital as much as possible. Friends would make sure Andy wasn’t on his own on the days I couldn’t make it; I don’t know what I would have done without their support, they were a crutch to us throughout it all.

Oliver and Daniel were old enough to know the truth about what was happening to their dad so we were completely open with them. When Andy and I told them about his tumour, it didn’t occur to me that one day soon, I’d be having even harder conversations with them on my own.

Andy was discharged in September and it was clear to me that he wasn’t fit enough to come home. That evening, he had to crawl up the stairs on his hands and knees to make it to the nearest bed. He slowly recovered over the following months and made progress with his walking, using a frame and then eventually a stick. He would try to lead as normal a life as possible but the loss of independence really crushed him. The tumour was eating away not only at his health but at his identity too. Gone were the days where he’d spend hours practicing his photography, playing golf and chatting; now most of his days were filled with watching television. I can’t help but notice the silence of the TV since he’s been gone.

In November that year, Andy went for Gamma Knife treatment in Sheffield and at first, he seemed to be on the mend. His strength and mobility were improving day by day. This improvement was short lived though and Andy started going downhill a few months later. For the first time he was experiencing headaches and a new MRI scan showed the tumour had grown by 1mm, which didn’t sound like much but it had grown in the wrong direction.

He was put onto a course of steroids to control the swelling on his brain but it made him gain so much weight and his personality became even more erratic. When they tried to reduce the dose he was on, his balance took a hit and he kept falling over again.

Life continued in this way for a while but a highlight of summer 2017 was our family road trip to Andy’s brother’s wedding in Switzerland. It had been a year since his operation and it was so nice to get away and to see Andy enjoying travelling and photography again rather than crying and being aggressive. His personality changes were particularly hard for the boys to come to terms with so the trip was just what they needed.

A couple of months later, back at home, Andy fell backwards and knocked himself unconscious as he had no skull bone at the back of his head – a result of the surgery. I frantically called an ambulance to take him to A&E while I stayed home with the boys.

When I went to the hospital the next day to see him, I was absolutely distraught to find Andy comatose. Staff had found him on the floor in A&E the night before – he’d fallen and now had two bleeds on the brain and had suffered from seizures. ‘We did try to call you’ they said. Andy was then taken into theatre where surgeons operated on his shunt, and then into ICU where, little did I know, he would be spending his last days.

I remember one day in intensive care, Andy had been unresponsive all day but I held his hand and told him to look at me. He looked me right in the eyes and squeezed my hand tight. ‘How the hell did we get here?’ I thought to myself.

Two weeks later, Andy’s consultant called me in for a meeting. ‘He isn’t going to improve – nothing is functioning and we suggest it’s time to let him go.’ No wife ever wants to hear these words or make this decision but I knew what Andy wanted. We’d had the conversation in the past and he’d told me countless times that, if this were to happen, he would want the machine switched off.

I went home and somehow mustered the strength to break the news to Oliver and Daniel. Andy’s brother and friends stayed by his side for the next nine hours while I wiped away the boys’ tears and awaited the phone call. Andy died in the early hours of New Year’s Eve and later that night, as people all around the globe celebrated the new year, I was coming to terms with the fact our lives would never be the same again.

Hearing anecdotes about Andy at his funeral was a bittersweet moment. So many people came along, each with touching stories about Andy, many that I’d never heard before. He clearly made a huge impact on so many people’s lives and it saddened me that Oliver and Daniel had such little time with him. Since then, I’ve been shocked to learn just how many people are affected by brain tumours. The boys and I are trying to do our bit to raise awareness of this sad fact and we hope that one day a cure will put an end to all this suffering. 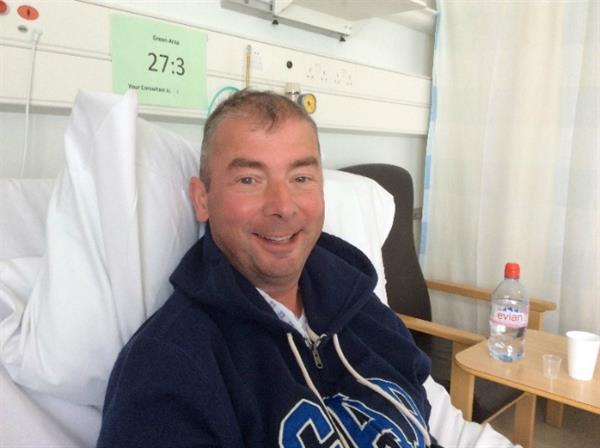