Alison Blackwell, from Brighouse in West Yorkshire, spent many years working as a successful graphic designer and art director for a clothing catalogue before going into the millinery business with her husband, Joe. Joe’s long-established family tradition of working in the hat trade combined with Alison’s fashion background, eye for colour and design flair, meant the couple made the perfect team. However, tragedy struck in December 2021, when Alison was diagnosed with an aggressive, inoperable brain tumour. She died just four weeks later, on New Year’s Day 2022, leaving Joe and their 18-year-old daughter Libby devastated.

I’ve been involved in the millinery business for as long as I can remember. My dad Billy and mum Wendy were both in the hat trade for many years and this family background led me to set up my own business, J. Bees Millinery, some 30 years ago. Alison came to the business around 18 years ago, having previously forged an amazing career as an art director for Grattan, travelling the world and working with top supermodels including Kate Moss and Helena Christensen. Over the years, Alison and I built up the business to be one of the UK’s leading independent wholesalers of contemporary millinery, supplying a whole range of independent dress houses, as well as some big-name, high-end retailers. We also have our own retail shop, Sinamay, in Brighouse. 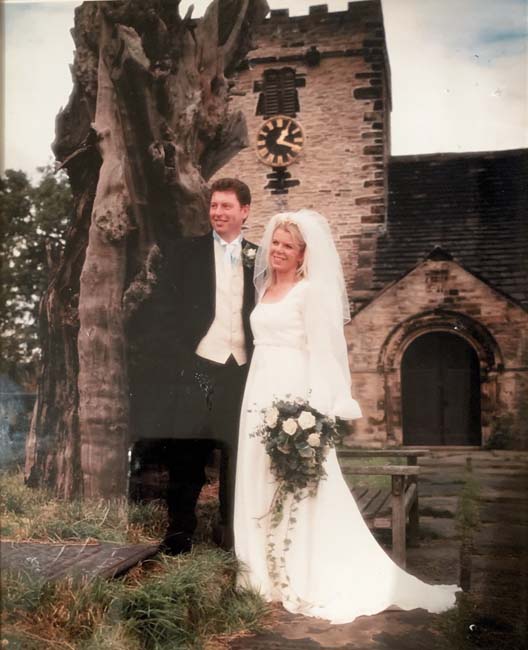 We had a great life together. We both enjoyed our work and never argued. We worked hard but when we had downtime, we would go out with friends for nice meals or walk our cavapoo, Teddy. We used to enjoy holidays to south Wales; we went to Pembrokeshire with Libby every year. We also loved Disneyland in Florida and travelled to America together a few times.

Life as we knew it changed forever on 10 November 2021. Alison had been out Christmas shopping in Leeds with her aunty Joan and they’d just enjoyed a nice lunch at The Ivy. When Alison went to settle the bill, she couldn’t work out how to use Apple Pay on her phone, nor could she work out any other method of paying. She struggled, but with Joan’s help she eventually managed to pay by card and then Alison drove her aunty home, which was about a 10-mile journey from Leeds. After dropping off Joan, Alison went straight to see her other aunty, Jen, to deliver some clothes she’d picked up for her in Leeds. A short while later she was safely home but she was visibly anxious and told Libby and me that she was worried about what had happened. We initially put it down to stress, as she’d been quite busy at work. We ran her a bath and when she got out, she sat in the bedroom with Libby but she was clearly feeling no better and Libby thought she was having a panic attack. She called me upstairs and said to me that something really wasn’t right with her mum.

“Then, all of a sudden, Alison started hallucinating. She thought I was her dad and didn’t recognise Libby or Teddy either. She was really confused.” 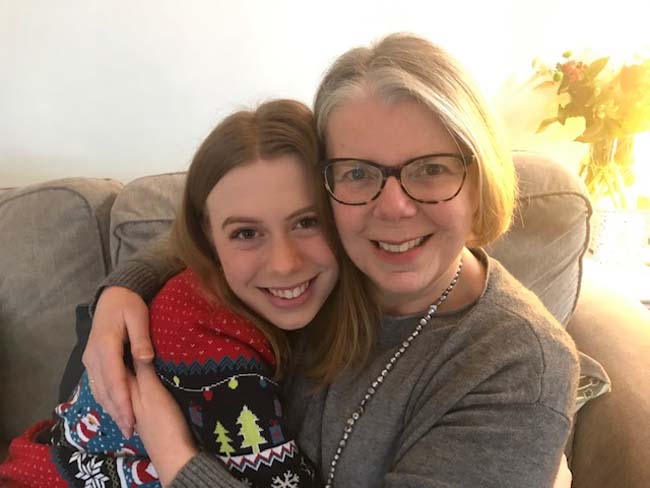 I asked her to count to 10 but she couldn’t. At that point, I decided to rush her to Calderdale Royal Hospital A&E in Halifax. When we got there, the waiting time was five hours but after she was triaged, Alison was quickly seen by a doctor. He was obviously very concerned – she couldn’t even remember her own name – so a bed was found for her on the ward. As soon as she got on the bed, she had a seizure. She was completely out of it and I thought she was having a stroke. It was really scary. I shouted the nurse over but the seizure was over in 30 seconds or so. They then sent her to another department and gave her a CT scan. A few hours later, a doctor came to tell me that they’d found a mass on the front of Alison’s brain.

I went home, feeling worried and shocked and I had to tell Libby the news. The following day, the two of us went to visit her at around midday. By then, she’d come round and recognised us again. Her memory was gradually coming back but she was still confused and scared. The doctors said they’d keep her in and do an MRI scan but that the location of the mass on her brain meant that it would be ‘curable’. They seemed positive that everything would be fine, which came as a huge relief. The next day, they did the MRI and the results were sent to Leeds General Infirmary (LGI) to be assessed. Meanwhile, on 12 November, Alison was discharged, having spent two nights in hospital in Halifax.

We got a phone call asking us to go into St James's University Hospital in Leeds. The consultant told us that, unfortunately, the MRI had found another tumour at the back of Alison’s brain, which he referred to as a ‘speck’. A few days later, Alison underwent a biopsy to take a sample of the tumour for analysis. She coped remarkably well with the surgery and seemed fine afterwards but it would be a few more days until we got the results from the histology report.

Meanwhile, Libby’s 18th birthday was approaching. Her birthday is on 8 December and that was the day we were due to get the biopsy results but when we explained that to the consultant, he agreed to bring the results day forwards to 1 December. We went in thinking they’d tell us about the treatment plan and what could be done to get rid of the tumour but the reality turned out to be entirely different. Two consultants and a nurse sat us down and said they were sorry but there was nothing they could do. It was aggressive brain cancer – a glioblastoma multiforme (GBM) – and it couldn’t be removed with surgery. We were dumbfounded. We said we didn’t want to know the prognosis but it clearly wasn’t good. Because Alison looked so young, and was fit and healthy, the oncologist said he would put her forward for radiotherapy and chemotherapy, which was the only lifeline we had, but it would be palliative care to try to extend, rather than save, her life.

While Libby and I struggled to come to terms with this devastating news, Alison remained so positive. She took it all in and coped amazingly well. She was more concerned about us than herself and kept asking if we were OK.

“We went home and tried to get on with things but just two weeks later we had to call for an ambulance when we couldn’t wake Alison up one morning.”

She had another short stay in hospital but the next day she was better again, although was beginning to get words mixed up and forget things. It was awful to watch. Alison was such a sharp and witty woman. She read the newspaper from cover to cover every day. She had a comeback for everything! Not only that, she was a wonderful parent. You couldn’t ask for a better mum. She did everything for Libby; nothing was too much trouble. At home, Alison ensured that everything was perfect, using her creative talents to make curtains for the house and fancy-dress costumes for Libby when she needed them. She was good at everything, a real talent, but gradually we were losing her.

Alison’s radiotherapy was due to start at the beginning of 2022. On 30 December we went for a pre-treatment assessment at the hospital and all went well, with the oncologist confirming that he would put Alison forward for the NHS standard of care six-week course of radiation therapy. The next day was New Year’s Eve. She woke up with really bad headaches and was being sick. We rushed her to LGI A&E, and told the doctors that she seemed really poorly but she was just given anti-sickness tablets and sent home. With hindsight, they may have realised that she was coming to the end of her life. I think the signs were there and when asked where she wanted to be, Alison, although confused, said she just wanted to be at home.

When we got home, we got into bed but Alison just couldn’t settle. She was having a lot of seizures. Then, all of a sudden, her breathing stopped. I switched the light on and could see her lips had turned blue and her eyes were yellow. I went and got Libby because I thought Alison was about to die. We put her in the recovery position then Libby started doing CPR on her while I called for an ambulance. It took the paramedics about 45 minutes to arrive and we continued doing CPR all the time we were waiting for them. It was so hard. Eventually, they arrived and they spent an hour in the bedroom trying to revive her. They managed to get a slight pulse and got her into the ambulance and we followed her to Huddersfield Royal Infirmary.

When she arrived at hospital, she was put on a ventilator to keep her alive and Libby and I were asked if we wanted to see her, which we did, of course. In order to see her, however, we had to put on full PPE; masks, visors, aprons, the works. We couldn’t kiss her or speak to her properly. It was absolutely horrendous. After we’d seen her and left the room, the doctors came back and said she’d died and asked if we’d like to see us again. That time we didn’t need to put all the PPE gear on. It seemed completely ludicrous that we’d had to wear it just a few moments earlier, to say their goodbyes.  They said they were sorry but it really didn’t feel enough. 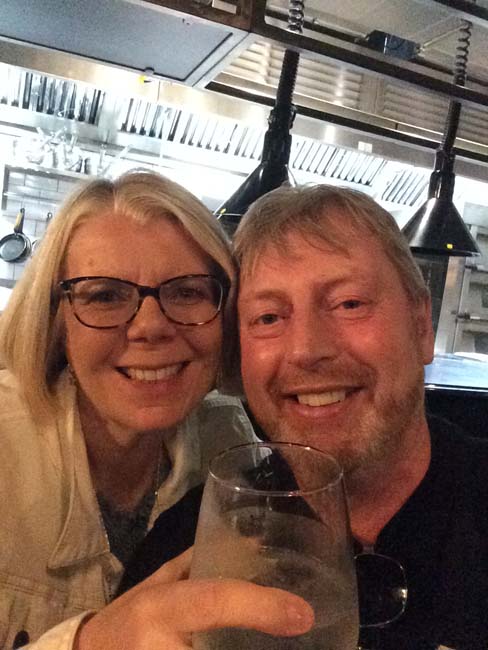 Losing Alison was so traumatic but we take some comfort from the fact that she didn’t suffer for a long time. More than 200 people came to her cremation at Dewsbury Moor Crematorium, which is testament to the number of people whose lives she touched.

“Alison was kind, caring, loving, funny and she made everyone feel at ease the second you talked to her.”

She radiated warmth and happiness to those around her, creating light wherever she went. She was a wonderful mum, who did everything for Libby; they had such a special mother-daughter bond. We miss her more than anything. 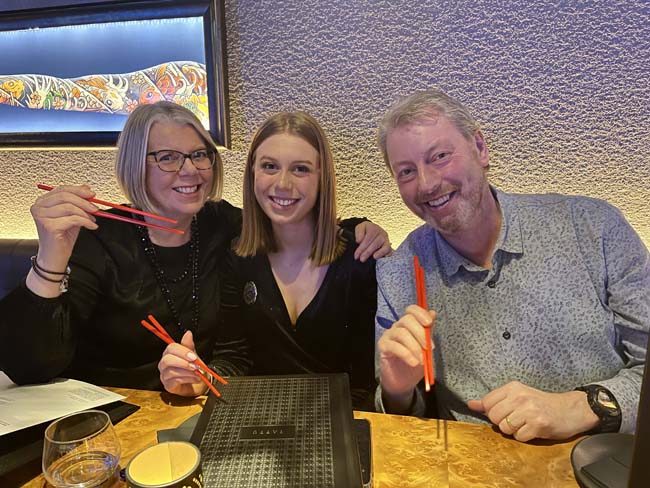 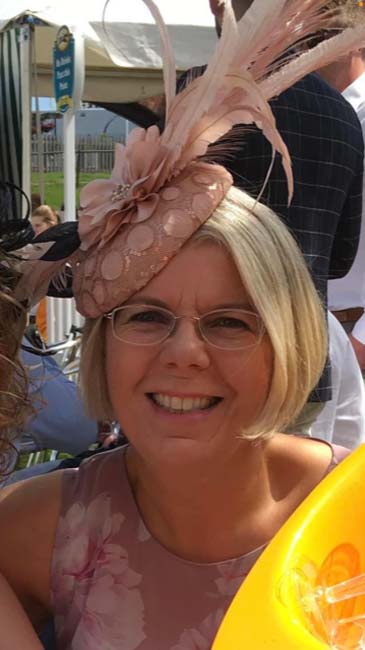