It seemed nothing would tear childhood sweethearts Sandra and Alan May apart. After 30 years of married life, they were given the devastating news that Alan had a highly aggressive brain tumour. Just 10 months later, in August 2016, he passed away, leaving his parents, sister, wife, two sons and three granddaughters. Facing life without her soulmate, Sandra has run a fete in memory of her husband for the past three years, alongside a football tournament organised by her son, Shane, and has helped to raise around £5,400 for the Brain Tumour Research charity.

“My grieving process began as soon as Alan was diagnosed. It felt like somebody had ripped my heart out and, when I look back, the whole period was a total blur. It seemed as if I was on standby. My life was completely out of control, but I had to stay strong and put on a brave face for Alan. In the final days I had to agree to Alan’s wish, to stop treatment, so that he could pass peacefully away. It felt like an eternity but it was the last act of love.”

Here is Alan’s story, as told by his wife Sandra…

Though my husband, Alan, passed away two years ago, I still wait for him to walk through the door. We were childhood sweethearts, soulmates and married for over 30 years. I’m still trying to come to terms with my loss, as are my two sons and three young granddaughters.

I met Alan when I was 16, though it was far from love at first sight. We shared mutual friends and, on a night out in Radley, I remember thinking he was extremely arrogant as he had the nerve to take my drink from me. He pestered me for the next few weeks and one evening I found him waiting in the living room, asking to take me out. I went along and, low and behold, we hit it off from there.

Alan and I spent the next 35 years together and never looked back. After our marriage in 1988, we had two sons, Shane and Dayle, and moved to Abingdon to raise our family. Alan was a doting dad and would do anything for his children. As they grew up, both of our boys worked with Alan at his building company. Dayle pursued a career in engineering and Shane carried on his dad’s business. Alan was a practical joker and would often play pranks on his family and colleagues, in later years both our sons became equally fun. When our granddaughters, Ellie, Poppy and Lola were born, Alan was completely smitten. He was such a natural granddad, truly adored his family and we all knew that, behind his playful character, deep down he was a big softy.

Alan had also helped me through my own physical struggles after a variety of neurological problems put me in a wheelchair. Using his building skills, he transformed our home so I could get by a lot easier in my day-to-day life, and redecorated the place so I felt more comfortable.

In October 2015, the day before Alan was diagnosed with a brain tumour, nothing seemed untoward. After returning from work, he began complaining about a bad headache. He went straight to bed for an early night, but the headache was still there the next morning and continued as he went to work. By the time he’d returned home, things were getting really bad. He was rolling on the floor in agony and said that he wanted to smash his head open with a hammer; it was at this point I rang an ambulance.

Alan was sent for an MRI scan, to help determine the cause of his symptoms. The next thing I knew, me and my sons were told that Alan had a grade 4 glioblastoma, a highly aggressive tumour, with a very poor prognosis. I couldn’t fathom the news.

My grieving process began as soon as Alan was diagnosed. It felt like somebody had ripped my heart out and, when I look back, the whole period was a total blur. It seemed as if I was on standby. My life was completely out of control, but I had to stay strong and put on a brave face for Alan.

We tried everything we could to save Alan, on top of the standard six weeks of chemotherapy and radiotherapy. My son Dayle frantically searched for other available treatments, it was his way of coping with the situation. We even tried cutting out sugar entirely from Alan’s diet but, despite our efforts, Alan continued to slip away from us over the coming months.

The tumour caused dreadful hallucinations and Alan became anxious of leaving the house as the outside world seemed to bring on the most dreadful visions for him. The house became his safe haven.

We met with an end-of-life doctor and we spoke about Alan’s terminal care. As his disease progressed, Alan was treated at home by the nurses from Sobell House Hospice. When Alan became bedbound and medicated by syringe, I knew it was the end. He also lost his ability to swallow and the nurses asked if, with my permission, they could stop all treatment, as it was Alan’s wish. When they asked me to agree it felt like an eternity, but it was the last act of love I could make. He passed away peacefully, surrounded by his family on 10th August 2016.

The night Alan passed away, several months of pent up emotion hit me. I went into total shock and passed out. Over the coming weeks, I struggled to regulate my emotions as I’d kept everything inside for so long, in an attempt to stay strong for Alan and my family. The effects of my bereavement weren’t only emotional, I lost over five stone over the course of Alan’s illness.

Though coming to terms with my loss has been extremely difficult, working with Brain Tumour Research helped me to gain closure. For the past three years, Shane has organised the Alan May Memorial Football Tournament with help from his brother Dayle. I run a fete alongside the event, where I sell items that I have crocheted. This has given me a great sense of purpose following Alan’s passing and it allows his legacy to live on in the community. Alan first came up with the idea for a football tournament while he was receiving treatment for his tumour. He used to be an assistant manager for a local team and thought it was an exciting way to a bring the community together. In total, we have raised around £5,400 by hosting this event and I hope it continues to be a success for many more years to come.

When I am having a down day, my greatest medicine is my granddaughters. I feel so happy and comforted when I’m with them. I know Alan would be so proud of the young girls they are growing up to be and I only wish he was here to see them himself. 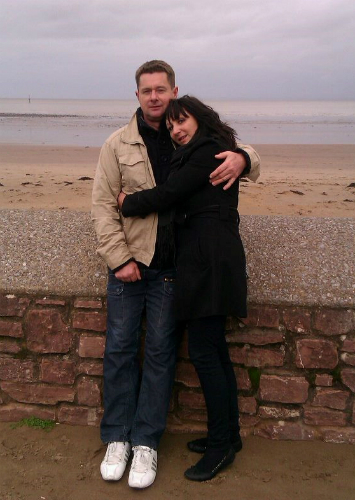