Adam and Emma met through their mutual love of cars. They had settled down with two small children, were happy at work, very much in love and engaged to be married. Despite numerous doctor’s appointments and hospital visits, Adam’s symptoms were repeatedly dismissed. By the time his brain tumour was diagnosed it was too late. He had several massive seizures and underwent emergency surgery. Adam died on New Year’s Day 2016 without regaining consciousness. He was just 27.

“Adam’s symptoms were repeatedly dismissed as nothing serious. As the brain tumour grew, he had a series of massive seizures. He went into surgery but never woke up. We had been planning our wedding but now I’m alone at 24 and my children are left without their daddy. Our lives have been destroyed and it is all so unnecessary – had he been diagnosed earlier he would still be with us now.”

Adam and I were introduced by a mutual friend on Facebook. We were both petrol heads and had our first date in a car park. At the time we both drove old bangers and loved everything to do with cars. We sat talking until 3am and that was that. Until I met Adam I never believed that everyone had a soul mate. We were like the male and female versions of the same person. Just a couple of weeks later Adam told me he loved me; I felt the same about him.

Along with the cars, we had other things in common. We shared the same work ethic and wanted to make a home. We worked hard and were keen to get a mortgage and buy a house. We bought a run-down house in Dunstable which we renovated and the money we made enabled us to move back to Watford.

Neither of us liked to drink much and in many ways we were like an old couple, content to stay at home, save money and look after the house. We got engaged a year after we met and Lola, who was a bit of a surprise, was born a month later, in January 2012. We were both very happy. By this time we were settled in Trident Road, Watford, and Parker was born in April 2015. We talked about having a third child but decided to wait until we were earning more money and in a position to move to a bigger house.

We both had a number of cars over the years. Adam was a popular guy and had lots of friends who knew him as “Barxy”. Everybody knew his iconic imperial blue Zetec 5 which had the number place B2ARX and he lavished attention and money on it. Adam would clean and polish it every weekend with Lola helping out and, to his delight, it was featured in the magazine Max Power which was dedicated to performance-tuning and boy racers.

Adam managed to spend his working life with cars too. He was promoted from estimator to assistant manager at Pennings Accident and Repair Centre in Watford. I was a dental nurse at Bricketwood Dental Practice and we both enjoyed our jobs. Things couldn’t have been better.

In fact, life was so perfect that I used to wonder if something would go wrong and I would be punished for having everything I ever wanted. Five months after Parker was born in April 2015, Adam started having episodes where he would just freeze and stare straight ahead for 20 seconds or so. Although we didn’t know it at the time, he was suffering from absence seizures which were a symptom of the silent killer that was invading his brain.

Our GP said he was suffering from panic attacks and that he needed to de-stress. He had telephone appointments with a therapist but we both knew he wasn’t stressed or depressed. A cardiology appointment found nothing wrong, several more GP appointments resulted in the diagnosis of “common cold”. We weren’t satisfied with this and persisted in order to try to get to the bottom of things. At one time Adam’s blurred vision and sickness were put down to labrynthitis and he was prescribed anti-biotics and anti-sickness medication.

As we approached Christmas, our first together as a family of four, Adam was getting worse. At one stage Adam, who hadn’t had a sick day in eight years, even said to me he felt as if he was going to die. We got through Christmas Day and Boxing Day. On 27th December Adam had extreme stabbing pains in his head and we took him to hospital. It was our third visit to A&E.

He said he felt stupid going back after being repeatedly sent away but, with the support of a close friend, we got him there without having to resort to dialling 999. The hospital was at a loss to say what was wrong and asked us what we wanted them to do. We told them that a CT scan would be a start.

That was the beginning of the end. The scan immediately identified a large tumour in Adam’s brain and we were rushed from Watford General Hospital to the National Hospital for Neurology and Neurosurgery at Queen’s Square, London.

Adam had a series of terrible seizures and was taken into surgery for an emergency procedure to “debulk” the tumour. It was a high-grade glioblastoma multiforme (GBM), the most common and aggressive form of this dreadful disease.

Just a week before Lola’s fourth birthday she said goodbye to her daddy for the last time. Five months on and she still cries for him every night. Parker was just eight months old and isn’t really aware of what has happened. I’m not sure if that makes things better or worse. Adam never regained consciousness and he passed away on New Year’s Day. His last words to me were “love you too.”

I was sickened to learn that brain tumours kill more children and adults under 40 than any other cancer … yet just 1% of the national spend on cancer research has been allocated to this devastating disease. The consultant told me that Adam would be alive today if he had been diagnosed earlier. I want people with families to know about this, perhaps they can save the life of a loved one from being taken unnecessarily as I feel Adam has been snatched away from us.

No-one knows what causes brain tumours and, in my experience, too little is known about the symptoms. I took Parker to the doctor recently after I noticed he was tilting his head strangely only to be told that “children his age don’t get brain tumours.” I pushed to have him checked out and fortunately all is well but I have been left with a deep mistrust of people in the medical world.

We were so excited about getting married and had picked the venue. The children were going to play a big part in the day and Adam was even going to fly in by helicopter. I had chosen my wedding dress but, out of superstition, didn’t show it to Adam. I now wish I had. It is still in the box as I haven’t the heart to look at it.

I marked the day we were to be married by changing my surname. I should have been Mrs Adam Barclay but becoming Emma Barclay is the closest I will get. 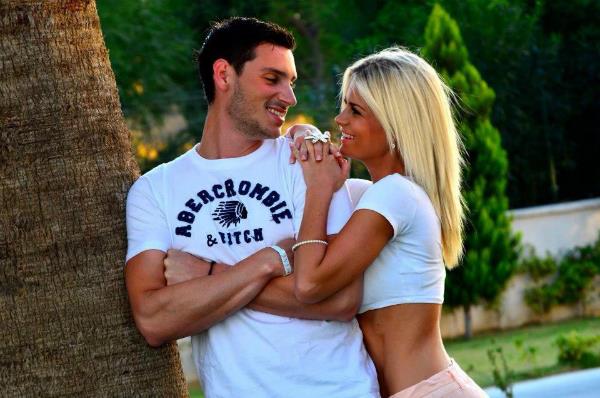