The first signs that there was anything wrong with our daughter began around the end of August 2010 when Abigail started being sick every morning.  Doctors prescribed a number of different medications to treat her for acid reflux, but none seemed to help and, by the middle of October, she had lost over half a stone in weight as her appetite had diminished.  It was at this point that we did briefly consider whether she had an eating disorder and even chased her upstairs on one occasion to check whether she was making herself sick.

Over the following weeks and months, Abigail underwent a series of tests, including a comprehensive examination of her eyes, but all came back clear, even the eye test, which can be a key method for indicating the presence of certain types of brain tumours.

Finally, an MRI scan was booked for 18th February 2011, but not long before this was to happen, Abigail collapsed and was taken to Bolton Royal Hospital. Doctors performed various manual dexterity tests on Abigail which all came up as normal and as the scan was booked for a few days later they decided to wait.  It was only then, at the age of nine, that she was finally diagnosed with a medulloblastoma brain tumour, around 20 weeks after we first had taken her to the GP about her vomiting.

Obviously the diagnosis was terribly distressing, but the length of time it took until a brain tumour was discovered plays heavily on my mind.  My wife and I don’t have an issue with what the medical people did; it’s the protocol they had to follow which was so lengthy.  In hindsight, Bernie and I feel that Abigail’s chances of survival may have been increased (granted not by much) if the diagnosis had been made earlier.

Abigail then underwent a craniotomy with the surgeons taking out 95% of the tumour, leaving the remaining 5% sitting too close to the brain stem to risk removal at that time.

Abigail then endured the Packer regime of chemotherapy (three weeks on drugs and three weeks off) for a period of 48 weeks.

Her surgical team talked about Abigail having another operation to try and remove the last 5%, but what was left could have been scar tissue, so it was felt that the risks outweighed the potential benefits.

We were worried that Abigail would be self-conscious about losing her hair, but it didn’t seem to faze her at all.  In fact, she was quite excited about what colour her wig might be.  In the event she never ended up wearing one, but she would often wear a hat to keep out the cold.

It was astonishing how positive Abigail remained throughout her ordeal.  I am sure that if she hadn’t been the way she was Bernie and I would have been a pair of wrecks.

By the time Abigail was nearing the end of her time at Heathfield Primary School, she had very little balance and could only walk more than a very few steps with the aid of a walker.  She also had difficulties with coordination as well as weakness on her right side.  Amazingly, however, Abigail’s education didn’t seem to have suffered and she was due to transfer to secondary school in September 2012.

Despite all the treatment, a scan in August revealed that the cancer had returned.  Just a few short weeks before Abigail was due to start at Ladybridge High School in Bolton, we were given the devastating news that there was nothing more that doctors could offer.

In total, Abigail managed to attend her new secondary school for eight days over a period of six or seven weeks, but then had to stop completely because she was too poorly.


Abigail passed away in Derian House Children’s Hospice on 10th November, 2012 with her family by her side.

We are so proud of our daughter.  People don’t understand how inspiring and courageous Abigail was.  It was a terrible shock to learn that Abigail had a brain tumour and then devastating to learn that there was so little that could be done.  We discovered that brain tumours are the biggest cancer killers of children and the under 40s, yet less than 1% of national cancer research spending goes on brain tumours.  This is such an injustice to the thousands of families each year who learn that a loved one has a brain tumour.

Even before we lost Abigail, I had already determined to do my bit to make a difference and had started making plans to walk part of the Great Wall of China.  Eleven work colleagues at Kingsland Wines & Spirits in Irlam, where I am Warehouse and Distribution Manager, decided to join me to raise funds for Brain Tumour Research.  Our nine-day trek in April 2013 – along 50km of the most remote and derelict parts of the wall – raised £40,000, which will help continue the fantastic work that goes on at the charity’s Centres of Excellence. 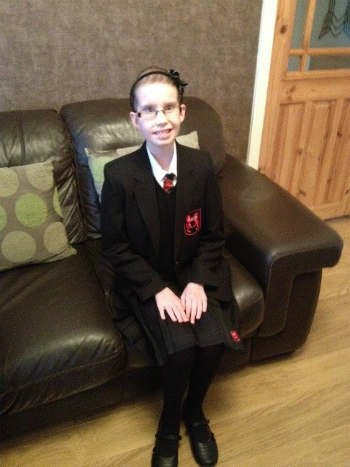