Father-of-three Wayne Chessum, from Lincolnshire, was 39 when he was diagnosed with a haemangioblastoma, a tumour formed from cells that line the blood vessels, at an early stage of their development. Since his diagnosis in 2008, Wayne has undergone emergency brain surgery, two courses of stereotactic radiotherapy and has recently been diagnosed with the rare hereditary condition, von Hippel-Lindau disease (VHL).

It was in January 2008 when we had just returned from a holiday in Florida that Wayne first started to feel poorly. He thought it was a cold.  As he continued to feel unwell, Wayne went to the GP a number of times and was treated for an inner-ear infection.

Not long after that, he spent one weekend in bed, not wanting to eat or talk. We visited the GP, who was sufficiently concerned to refer Wayne immediately to Grantham and District Hospital, where he had a CT scan.  That’s when they found a tumour in his brain.

“It was a massive shock to us, however, Wayne felt relief that they had found something wrong, as he had been feeling so unwell for a couple of months.”

Wayne was transferred to Queen’s Medical Centre (QMC) in Nottingham, which has a highly specialist neurosurgery unit, where he underwent an emergency craniotomy to remove what was diagnosed as a low-grade haemangioblastoma in his cerebellum. Whilst Wayne was in hospital, he didn’t see his children for seven days.  Wayne has two sons, Ashley and Harvey and together we have a daughter, Hollie, who was just five at the time. We had to leave her with her grandparents when Wayne was referred for the CT scan. 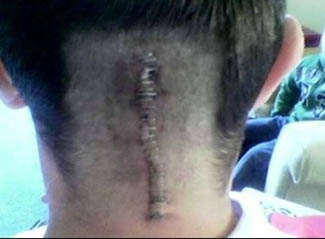 “Wayne recovered well from surgery but the following year, we had another devastating blow when a scan revealed that there was some regrowth of the tumour.”

We had been warned that it would be almost impossible for surgeons to be absolutely certain whether they had managed to remove all traces of the tumour, particularly as they were trying to access an area as deep into the brain as the cerebellum.

Wayne was recommended for stereotactic radiosurgery at the Royal Hallamshire Hospital in Sheffield (the largest of a few centres in the UK to offer this).  The stereotactic radiosurgery, known as Gamma Knife, uses a large number of precisely directed beams of radiation to treat the abnormal tissues or blood vessels in the brain.  It’s not surgery in the traditional sense because there’s no incision and it has minimal impact on the surrounding healthy tissue. After the radiosurgery, we were told it was a waiting game.  The procedure results in the tumour swelling initially and we were told that this would take around two years to settle down.  In fact, it wasn’t until three years later, in October 2012, that the neurosurgeon in Nottingham was able to tell Wayne that his tumour was static with no regrowth – the radiosurgery which took place in Sheffield appeared to have been a success. 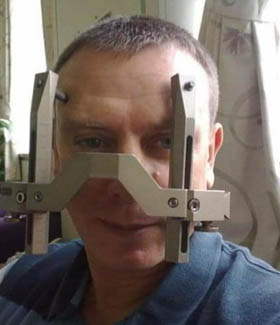 He continued to be monitored with annual MRI scans, which were then reduced to every two years. For several years, the scans showed the tumour reducing and we thought that was going to be it. Then, to our huge disappointment, a scan in 2018 showed that more tumours were growing. It was a shock, because Wayne had been feeling really well in himself and hadn’t experienced any symptoms. They decided to “watch and wait” until another scan on 5 February 2020 identified another tumour where the brain stem meets the spinal cord (medulla) and they decided it needed to be treated.

“There was some discussion around whether they would operate on the new tumour but due to its tricky location, they advised him to go for more stereotactic radiosurgery.”

In spite of the coronavirus pandemic, Wayne’s treatment went ahead at Royal Hallamshire Hospital in May 2020. If anything, I think his treatment was sped up by the impact of lockdown because some patients were shielding, enabling Wayne to climb the appointment ladder for treatment.  Following the Gamma Knife at Sheffield, it was then confirmed that he had received treatment on seven tumour sites within his brain, including one on his spinal cord, and he recently had a diagnosis of von Hippel-Lindau disease (VHL), a hereditary condition associated with tumours arising in multiple organs.

When Wayne received his diagnosis in 2008, we were made aware that haemangioblastomas mostly occur as part of this rare condition but Wayne wasn’t initially thought to have it, as there were no other tumours in his body. Once it was thought he may have it, he was referred to the genetics team at QMC for testing and last summer VHL was confirmed. He is now on a yearly screening programme of all of his organs, which could be affected. Recently, Wayne has been suffering from palpitations, tremors, sweating, and fluctuating blood pressure; all of which are symptoms related to pheocromocytoma, a low-grade tumour of the adrenal glands. He recently underwent screening, which revealed raised levels of metadrenaline, which is another indicator of pheocromocytoma but the precise diagnosis is yet to be confirmed.

“Because VHL is hereditary, Wayne’s diagnosis has opened up another can of worms. His three children and parents have been offered genetic testing.”

So far, his two sons and his mum and dad have undergone the tests and are awaiting the results to find out if they could have the condition as well. Hollie, who is now 18, is yet to decide whether she wants to be tested but even if she doesn’t go ahead, she will also be eligible for yearly organ screening. It’s obviously caused a lot of worry but there is a chance that they will all come back as ‘negative’ and we are trying to remain hopeful that this is the case.

Since Wayne’s diagnosis and craniotomy, he has had to retire from his job as a prison officer and he is now self-employed doing painting, decorating, kitchen and bathroom fitting, tiling, gardening, property maintenance, fence building and many other jobs. He sometimes struggles with overwhelming fatigue and his balance and coordination can also be affected. Luckily, most of the people he works for know and understand his situation.

“Despite his difficulties, he succeeded in getting back to playing cricket – one of the biggest loves of his life – and became an England and Wales Cricket Board (ECB) cricket coach!”

Before Wayne was diagnosed, he was extremely fit and he believes this dramatically assisted the speed of his recovery.  Wayne has always been an enthusiastic sportsman and played all sports.  He has maintained a high level of fitness throughout his treatment and remains passionate about sport and exercise.  He qualified as a gym instructor, enabling him to volunteer in the local community gym, which I helped to set up and where I also volunteer.  This remains his passion and focus, as he understands the importance of remaining healthy in order to face future treatments.  He uses the gym at least five times a week himself. He has a very healthy diet and generally steers away from treats such as crisps, chocolate, cake.

“Over the years, with help from friends and family, we have raised money for Brain Tumour Research, and visited one of their Centres of Excellence in London, to see the fantastic scientists at work.” 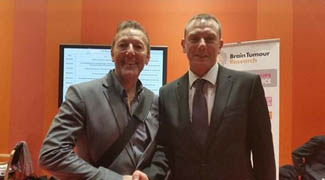 This Brain Tumour Awareness Month, I am fundraising to support the much-needed research the charity continues to do. I will be walking, running and cycling throughout the month of March. My goal is to reach 676 km, as this is the number of weeks since Wayne’s first surgery back in 2008.  As this is quite a big distance, I have enlisted the help of our daughter Hollie and we hope to raise at least £676. As a family, we have always done a lot for charity. We live in a village called Billingborough, near Sleaford, and over the years we have put on pantomimes in the village, we take a Santa Sleigh round local villages each Christmas, as well as holding fun runs, fairs and coffee mornings to raise money for charity. COVID-19 has obviously put certain events on hold for the time being but I am determined to continue fundraising in spite of the challenges. My workplace, North Kesteven District Council, will also be taking part in Wear A Hat Day, albeit remotely this year. 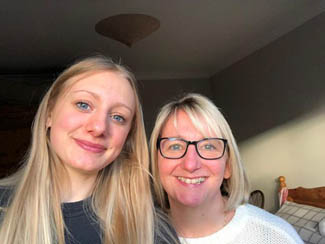 Before our own experiences with the disease, we never realised how prevalent brain tumours were or how devastating it is when you hear that a loved one has been diagnosed with the condition. His neurosurgeon told Wayne that if the haemangioblastoma had been detected ten years earlier, then Wayne would possibly no longer be with us. Fortunately, medical understanding has moved on a great deal.

“With more investment in research, who knows where we could be in terms of treatments for brain tumours in ten years’ time?”

Wayne and I continue to live life to the full and enjoy every day. We have learned a lot about resilience too. Our daughter Hollie overcame meningitis as a child and that changed our outlook on life, as has Wayne’s brain tumour diagnosis. We wake up every day thinking how lucky we are that we are all still here and we don’t stress over the small things. 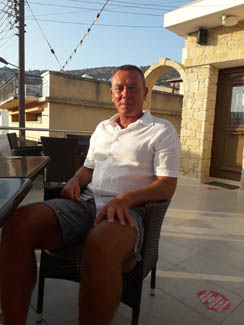