A year after her diagnosis and surgery to remove a low-grade brain tumour, Vicki is back at work as a hairstylist and loving life. Despite being warned her tumour could grow back, Vicki is celebrating after four clear scans. She is sharing her story in the hope of telling others that there is life to be lived after the devastation of being told you have this disease.

“I hope that sharing my story will inspire others. As dreadful as a brain tumour diagnosis is, sometimes there are happy endings. At the moment I feel very blessed, I am on cloud nine, back at work and loving living a very normal life. I have a souvenir of the operation – a scar which runs from the top of my temple around my ear – but have no ill effects whatsoever and feel invincible.”

One of the most difficult things to live with was losing my driving licence. I count myself fortunate in many ways, including that I have been able to go back to work although, before finally getting my licence back in June 2018 it took me two hours to get to work by public transport, a journey which previously took just 20 minutes in the car.

I absolutely love my job as a hairdresser and it’s going to take a lot more than a brain tumour to make me give up! I’ve been at the salon, Alternative Styles in Torpoint, for four years and travel there from my home in Saltash.

I always knew I was special and it was the simple reason that I always felt something wasn’t quite right, that I was different in some way. I always wanted to be ‘normal’, the same as everyone else but I was dyslexic, I was often tired and lethargic and had felt like that for as long as I can remember.

I have always been very outgoing and the performing arts have been a massive part of my life. Making friends and talking to people has never been an issue for me.

In many ways I feel like I have spent the last ten years going backwards and forwards to the doctor. I thought it just be something like an under active thyroid - which runs in my family. In July 2017 I had a horrendous headache, all the symptoms of a migraine. I was physically sick and all I could do was go to bed. Not long after that I had problems with my eyesight. It was like old school TV where everything goes fuzzy and I could see zig zag lines.

I had my eyes tested at Derriford Hospital in Plymouth but everything seemed normal and I was told my eyes would return to normal after the migraine had passed but a week went by and I was feeling sick and still had disturbed vision.

Physically there was nothing wrong with me and I carried on driving and going to work. But things didn’t get better, I had another migraine and this time was prescribed medication by my GP.

Eventually, it was my mum who insisted I went to A&E but, even then, I was sent away after tests were normal and told to contact my GP if the problems continued. I began to think that maybe there wasn’t anything wrong with me after all, perhaps it was all psychological, maybe I was even going mad. At one stage, I even joked at work that ‘knowing my luck I would end up being told I had a brain tumour.’

Fortunately it turned out that A&E had referred me to the Royal Eye Infirmary at Derriford and – thank goodness they did – because had that not happened I don’t think I would be here today. So, eventually it was noticed that the optic nerve behind my right eye was enlarged and I was told I would need to return the following day, a Saturday, for a scan. I agreed, albeit reluctantly, as it was my busiest day in the salon. The night before the scan I went out with my husband Rich and my best friend and her husband and thought to myself maybe it would be the last time that everything would be normal for me. To be honest I never thought that I was going to die - rather that I was invincible - but I knew something was wrong.

My heart was racing as I had the CT scan and then later another scan with contrast. We waited around for what seemed like forever being seeing a doctor and I felt sorry for him as he delivered the news that no-one want to hear. “I’m really sorry to tell you that you have a mass in your brain,” he said. But instead of crying I had a great big smile on my face. It was the sign of relief, relief that it was true, there was something different about me and I had known it all of my life.

I was told to ring my family and friends. There was a bed waiting for me on the neurosurgery ward and I wouldn’t be leaving the hospital that day. My mum was in hysterics as I phoned Rich and asked him to bring some things in for me. My neurosurgeon Titus Berie told me I had a massive brain tumour, it was the size of a tennis ball and the largest he had seen. My case was high priority and on 14th July I was in surgery for a seven hour operation and then sent home to recover five days later.

My recovery was remarkably quick although I had to take time off work and Rich was working six or seven days a week to help keep a roof over our heads. I had a second operation because of an infection in my skull but was back in the salon after six and a half weeks which I thought was a good effort.

They weren’t able to remove all of the tumour, which was a grade two glioma and I was warned that it will regrow. However, it is now 12 months since my operation and there is no sign of any tumour whatsoever. I have not had any chemotherapy or radiotherapy and I know I am very fortunate.

I hope that sharing my story will inspire others. As dreadful as a brain tumour diagnosis is, sometimes there are happy endings. At the moment I feel very blessed, I am on cloud nine, back at work and loving living a very normal life. I have a souvenir of the operation – a scar which runs from the top of my temple around my ear – but have no ill effects whatsoever and feel invincible. 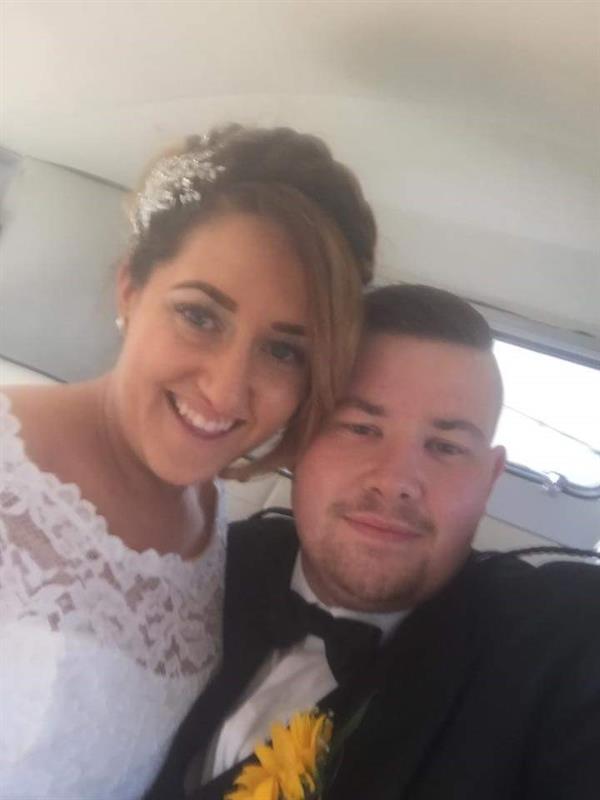