Sports-mad entrepreneur Tom Beech, now 22, was only five when he had his first seizure. With the support of family and friends, Tom is living with his low-grade brain tumour while also fulfilling his dreams of travel and launching his own fitness business.

“I’m living my life as I want, with the business ready to take off, and I’m even taking a few months out to travel. My only worry is getting the rucksack full of pills through customs…”

I had my first seizure at five years old. Initially we thought it was somehow related to chickenpox, but it was a benign tumour in my brain. I can’t imagine what that news must have been like for my parents.

Seizures became a regular part of my childhood in Bushey, but I was still a very active child. My brother Will, who is two years younger than me, would always be outside with me playing football in the garden. He always had to be in goal. We called the seizures “shakies” so they didn’t sound quite so scary, but I remember dreading them coming. I always knew, after a few weeks without one, that another would happen soon.

The shakies would usually happen in the early hours of the morning while I was sleeping, so we had a baby monitor in our shared bedroom until we were quite old. I vividly remember my mum, Liz, always being there to reassure me that everything was okay as I came around, saying “be strong”. That motto stuck in my mind so much that I now have a tattoo to remind me. My parents have always been incredibly supportive and encouraging me to keep doing the things I loved rather than hiding away.

We have never been able to identify the triggers for my seizures. I tend to stay conscious and, afterwards, my right side goes numb and I basically can’t move much for a day. I avoided sleepovers with friends and didn’t tell many people at school about it, although they knew I had to go to hospital sometimes.

I have clear memories of numerous visits to the GP, Watford General Hospital and Great Ormond Street Hospital. GOSH is very kid-friendly, as you would expect, with games in the waiting room and films to watch during MRI scans. They used to tell me that they were just taking pictures of my head and I could just fall asleep during the scan if I wanted to, but it was impossible really as it was so loud.

As I got older, I started to ask more questions and learn more about my illness. By the time I was in secondary school, I knew it was called a benign brain tumour – medically termed as a dysembryplastic neuroepithelial tumour (DNET). It became a bigger part of my life. When I was 11, I used to love going to football club, but one day I headed a ball and then collapsed on the pitch with a seizure. I was so aware of all the shocked faces of parents and players. I never went back and stopped playing football after that, taking up rugby instead. It felt humiliating to have everyone know and feel sorry for me. I didn’t want that.

I just wanted to be normal and have never asked for extra time on exams or any special treatment. It was tough, as a child, not to always be able to do what I wanted. I remember having to go to GOSH for tests for a whole week and being stuck inside watching Britain’s Got Talent every day. I was so annoyed; it was half-term and all my friends were out doing fun things.

I went onto anti-seizure medication after getting worse and missing days at school. My doctor tried to downplay the seriousness of the situation but I knew something was wrong. Taking my meds became a bit of a ritual, I would always stand in the kitchen in the same place.

I was determined to stay active and sporty, despite my illness, and went skiing while at secondary school. It was still rare for me to have a seizure while awake but I was unlucky on the slopes one day. My dad and brother were nearby and had to grab me, other skiers stuck their skis in and made a kind of barrier around me to stop people skiing into me. I was still half way down the mountain, so once the seizure passed I had to ski down balancing on one leg with Dad and Will helping me. Two years later, we went back and I skied the same run.  All my friends and family clicked their poles in the air as I came down the swoosh, it was a great moment!

Surgery has been discussed over the years and now I am over 18, if the choice is offered, it would be my decision about whether or not to have a resection. The area of the brain around my tumour controls movement, so there is a risk there. I used to have temporary paralysis after seizures, so I could have been left with permanent weakness down one side, plus there is no guarantee that surgery would stop the seizures. It’s darkly interesting to see how the structure of the brain affects each part of you. I took Psychology A level and used to look through all my old MRIs to see if I could identify the tumour.

I still don’t like to tell people about it. I don’t like them fussing around or worrying about what to do or say. Obviously, I told my housemates at university so they knew what to do if I did have a seizure, some people think they should hold me really tightly to stop me shaking but that’s not the best idea. I advised them to time it, keep talking to me and call an ambulance.

Going to university in Gloucestershire was a great experience, I was studying Sports Strength and Conditioning as I enjoy being part of a team and have always loved sports – although the doctors recommended that I avoid boxing! I was hoping to be able to drive there and had even booked my test, being seizure-free for a year, when I suffered a seizure only three days beforehand. I was sulky and tired, with not even enough energy to be angry, it was just the way it was. I finally passed (first time!) after university, having waited another year since my last seizure.

My dissertation was on teaching and coaching children, so initially after I graduated I worked in a special needs department of a school. You can really see the difference you’re making with these kids. My vision was launching my fitness website in 2017, Rockhopper Fitness, inspired by the tenacity of rockhopper penguins. Those little things just keep going! I want to be the best I can be, without letting my illness hold me back, and hopefully helping adults and children to get active and love sport as I do.

Rockhopper is supporting the charity Brain Tumour Research as it pinpoints exactly what we want to do to help. I’m on annual scans now, being monitored regularly and taking ten pills every day. I’m living my life as I want, with the business ready to take off, and I’m even taking a few months out to travel. My only worry is getting the rucksack full of pills through customs… 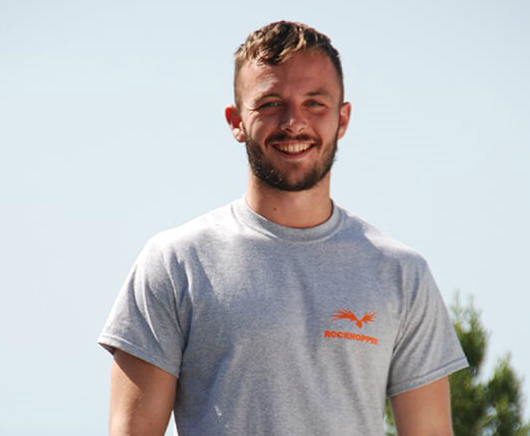