Sophie was eventually diagnosed with a low-grade meningioma brain tumour after suffering crippling headaches for nearly a year. Feeling frustrated and desperate after months of repeated visits to her GP, it was a chance visit to an optician which led to her diagnosis. Eighteen months after her surgery Sophie is back at work but still struggles with nightmares about the tumour coming back.

It was around Christmas time in 2012 when I started to have headaches. At first, I didn’t really think anything of it but after a month or so I went to the doctor who put it down to stress. The pain seemed to be getting worse and I went back to my GP two or three times a month for the next couple of months. I was given various tablets, including beta blockers which can help for migraines, but they didn’t work.

The headaches continued and I persevered with the doctor, explaining they were worse and that I had noticed they were often happening in the morning. In trying to explain how bad the pain was I remember saying that I was feeling a great pressure inside my head and it was so bad that I wanted to stab myself in the head. That sounds extreme but things had got so bad and I was desperate. After seeing a couple of different doctors I was given a neurological check at the surgery but this didn’t show anything was wrong. Eventually I was referred to a hospital neurological unit but there was a mix up and, despite a number of phone calls from me, the appointment never came through.

It had gone on for so long by that stage with repeated diagnoses of stress that a little bit of me just felt like giving up. Normally I have trouble sleeping but, by this stage, I was extremely tired and one evening, while I had friends round, I fell asleep. That was so out of character for me. I also remember being with my mum one time when the pain was so bad I was screaming because of the pressure I could feel in my head.

Ironically, I was having a good day when, in November 2013 I went into Eastleigh on a shopping trip. I walked past Specsavers opticians and there was a man there inviting people for an eye test. As they had an appointment straight away I went in. I explained that I had been having these headaches and the optician did some tests. I was told that my optic nerve appeared to be haemorrhaging and swollen and that I needed to go to the hospital straight away.

I don’t really know what I thought at that stage but certainly I didn’t really think it was anything serious or even connected to my headaches. A friend drove me to the eye unit at Southampton General Hospital and I waited for a couple of hours. To be honest, I felt guilty even being there. I felt absolutely fine and there were people around me who were obviously ill.

The eye checks which I had had at Specsavers were repeated, with the same results. I was admitted to the hospital on Friday and taken for a CT scan. The results showed there was some sort of swelling on my brain but they couldn’t tell what it was. I was given steroids to help with the swelling and had an MRI scan the following day. I felt like a fraud; there I was in hospital and I didn’t feel ill at all. I was certain that I would be going home soon and that the doctors were being over-cautious although my mum said she thought there must be something wrong.

My friends came to visit and we walked down to Costa and I even thought maybe the headaches were due to caffeine addiction!

I stayed in the hospital for the weekend and, on Monday, the doctor came to see me along with a nurse to hold my hand. The doctor said the lump was a tumour in the right ventricle. I just froze. He said no-one knows what causes brain tumours, it’s just bad luck. Looking back, I find it very difficult to understand why so little is known about brain tumours and that is why I am adamant to do all I can to raise awareness and funds to allow vital research to take place.

When I asked the doctor if I could go outside he said: “As long as you come back.” I burst into tears and could feel myself shaking as I phoned my mum who came to the hospital straight away.

We had an anxious wait to find out what was going to happen. I thought I would be discharged and then called back for surgery in a couple of months but the surgeon said he would be operating very soon, on the Thursday.

More would be known about the type of tumour I had once the operation was underway. It turned out to be a low-grade meningioma which was 4.2cm wide, larger than a golf ball. It was removed in its entirety. Although I had initial problems with the sight in one of my eyes this has now been resolved and, thankfully, I have recovered well.

I was told that, had my brain tumour been undiagnosed for another month, I would have slipped into a coma and there would have been nothing that could be done for me. The neurosurgeon and everyone at Southampton General Hospital were fantastic and I credit the optician with saving my life. Although it is scary to think there is a small chance the tumour might grow back, I need to be confident that this would be picked up on my yearly MRI scans.

As a result of the diagnosis I have suffered with post-traumatic stress disorder and I still have nightmares in which I am back there and I have to tell my mum that it has happened again.

I work part-time as a catering assistant at the Woodlands Café at Itchen Valley Country Park and my colleagues here have been fantastic and are backing me with an event to raise funds for Brain Tumour Research.

It is so important that we find out more about brain tumours. I don’t want anyone else to go through what I have and would advise anyone who, like me, suffers from severe headaches should persist until they have a diagnosis that they can believe. 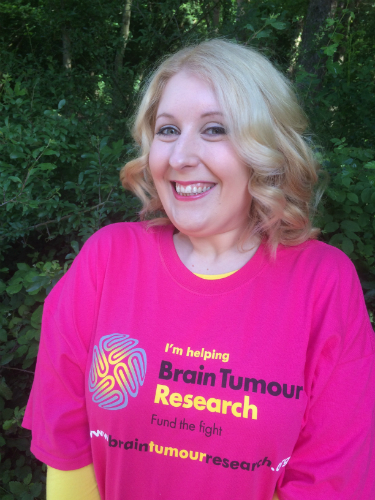