For the parents of five-year-old Sophie Duffee their world began to unravel when she was diagnosed with a brain tumour. They discovered her in bed and feared the worst as she suffered a severe seizure. Fortunately the tumour was operable and Sophie has just returned to full-time school. She undergoes scans twice a year.

Her mum Tracey tells her story …

Sophie is quite a character. A happy child, very bright and very determined, who had always been fit and well. Together with her older brother Ben she had been having a lovely summer. I went into her bedroom to get some clothes out for them as I was going to work and they were going to spend the day doing ordinary things like going to the park with their grandma. I glanced over at her and noticed that her eyes were open as though awake, but she did not respond when I spoke to her or tried to rouse her. I now know she was having an absence seizure, but at the time I had no idea what was wrong. I immediately shouted to Chris, Sophie’s dad, and he ran into the bedroom. Sophie was extremely pale and we really thought we had lost her. I started to panic. We moved her into our room and put her on to our bed. We didn’t know what was wrong with her and, as we called an ambulance, she started to twitch and jerk. This affected her face and all down one side of her body. It was a seizure, which lasted for ten to 15 minutes.  The ambulance arrived and I travelled with her to Queen’s Hospital in Romford. I was in shock. You never expect, for one minute, that you will put your child to bed only to find the following morning that you have lost them. This is exactly what we thought had happened. When she started fitting, I was almost glad. It is an awful thing to witness, but at least it meant she was still with us.

I suffer from a very severe form of migraine and there is also a history of epilepsy in the family so I suppose at the time I thought that it may have been connected to one or other of these things. One thing I knew for certain was that I didn’t want Sophie taken to Queen’s Hospital in Romford. I had nearly lost my own life there after giving birth to her five years previously, on 22nd January 2009, and the place still held negative associations for me. However, the paramedics informed me that it was the nearest neurological centre and that it would be the best place for her.

When we arrived there was a medical team waiting for us and she was taken straight into resus. There was equipment everywhere and they started putting numerous lines into her almost immediately. At one stage, it was suggested she might be having febrile convulsions, but I didn’t believe this to be the case as I knew she was not running a high temperature.

She was still having seizures as they started to take bloods and there was some discussion about a possible brain infection. She was given strong antibiotics in case of any such infection followed by sedative medication to control the seizures, which caused her to go into respiratory depression and she had to be put on to a ventilator as a result. Chris and I were in complete despair. We were standing there with no control over what was happening to our little girl. I had nearly lost my life after giving birth to her and now this was happening. I thought to myself: “God, why are you taking her away from me?”

Sophie’s seizures started to come under control and she was taken for a CT scan. We were then told they had found a “mass” on the right hand side of her brain and that there was significant swelling surrounding it. Of course it wasn’t a mass, it was a tumour and we were told that later.

A bed was found for Sophie in the children’s intensive care unit at Addenbrooke’s Hospital in Cambridge. Ben was with my mother-in-law and I called my sister to come over and help. I travelled with Sophie in the ambulance as we were blue lighted all the way to Cambridge and my husband followed in the car. Sophie had been given a lot of extra medication to enable her to cope with the journey. On arrival she was settled into the and, in the early hours of the following morning, she was taken off the ventilator. We were told this would take six to eight hours but, typical Sophie, she was sitting up in her intensive care bed within an hour.

After this we could only wait in dread as, the following day, she was taken for an MRI scan. She was eventually moved from intensive care and taken to a cancer ward, which was really tough. There were lots of children there who had been through surgery and some who were having chemotherapy. We were feeling pretty low. We didn’t know if Sophie would live or die. We were frustrated as there was going to be a delay before we knew what was happening in terms of treatment. When we eventually found out that she needed surgery I was terrified. We were told that the tumour was in “a good place.” At the time I thought, “What are they talking about? My child has a tumour in her brain, how can that ever be a good place?” It wasn’t until later that we properly understood. The tumour was in the front right hand side of Sophie’s brain, not too deep and so was easily accessible to the surgeons. Brain surgery is dangerous enough, but in another location the procedure could have been more so or even inoperable.

We were obviously delighted to bring Sophie home from Addenbrooke’s but, in many ways, she was a very different child to the one we had tucked into bed the night before the seizures. Her personality had changed, she had become extremely irritable and would get easily tired and upset. We put this down to the psychological and physical trauma of what had happened and the epilepsy medication she was taking.

We opted to have the surgery at Great Ormond Street Hospital (GOSH). The team there agreed with Addenbroooke’s that watching and waiting was not an option, Sophie needed surgery. We were told she would be left with a weakness down the left side of her body. How would Sophie cope with this and how would it affect her quality of life? This was a huge thing for me and bore heavily on my mind. I was extremely reluctant to sign the consent form for the operation as I feared what state my little girl would be in after the surgery. Sophie is the most precious thing in the world to me and apart from the shocking seizures we had witnessed, you could look at her and have no idea that she was even ill. I had a child with a good quality of life and I was being asked to allow her to have surgery with all the associated risks. When I expressed my fears to her consultant neurosurgeon, Kristian Aquilina, he looked at me and said: “I want her to be here in five, 10, 15 years’ time and more. I have to give her a chance.” He promised he would do his very best for her and that he would take very good care of her for us. One of the worst moments for me came on the day of Sophie’s first appointment at GOSH before her surgery. She looked at me and asked: “Mummy, am I going to die?” What do you say to your five-year-old daughter when they ask you such a question? I was struck dumb as her question really brought home to me the gravity of the situation. I finally answered, saying: “We truly hope not.” I really did not know what to say for the best but knew that I didn’t want to lie to her.

The night before the operation Sophie had another bad seizure at home. The ambulance came and, thankfully, she responded to medication. She was taken to Queen’s once more and transferred to GOSH the following morning where her operation took place on Wednesday 10th September.

Sophie was in surgery for five hours. Mr Aquilina himself came to talk to us immediately after the operation and took us down to the recovery ward to be with her when she came around from the anaesthetic. I can remember clearly to this day how he had the biggest smile on his face and told us, “It went very, very well, almost better than we expected. The tumour came away easily and completely and resembled normal brain tissue. The surgery went on a bit as I spent quite some time ensuring that I had removed the whole tumour.” Sophie now has a very special bond with Mr Aquilina and we had a picture taken of her just a few weeks after her surgery, which was made into a card to send to him at her request.

Sophie’s tumour was an angiocentricglioma and so rare that it had never been seen before at GOSH. It took until November to properly identify it and the long wait to find out whether her tumour was good or bad certainly took its toll. Initially, Sophie had scans every three months and now we have been told she is doing so well she will only need to go twice a year.

Sophie was back at St Bede’s Primary School in Chadwell Heath just three weeks after her operation. She started back for part of the day initially, building up to her first full day on 12th May 2015. Thankfully, through the brilliance of her surgeon and the way in which the tumour was situated in her brain, she has not experienced the left side weakness we were told was a certainty. 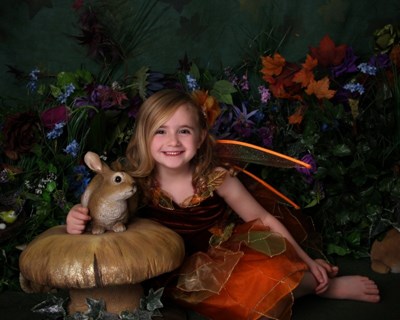