Father-of-two Simon Douglass was diagnosed with a grade 2 astrocytoma after suffering a seizure in February 2012. He had been experiencing tinnitus, which he had attributed to short-term stress from his job as a data analyst. The 51-year-old from Aspley Guise in Bedfordshire, underwent a debulking surgery and was put on a ‘watch and wait’ monitoring programme until 2018 when he had further surgery followed by radiotherapy and chemotherapy. He is now being monitored with regular scans.

Before my diagnosis, I was working as a data analyst and driving 100 miles a day to get to and from my job in Peterborough. I’d been experiencing tinnitus but having googled it and found stress listed as one of the causes, alongside brain tumour, I wasn’t overly concerned because I knew I’d been working a lot of evenings and weekends.

“I hadn’t done such intensive work for a long time and assumed the tinnitus would resolve itself once that had finished.”

I was trying to get on top of my work so that I could enjoy a long weekend away with my wife, Carolyn, and her family celebrating Carolyn’s 40th birthday when a noise came across my head, like an air conditioning unit being turned off. I turned to a colleague and said: ‘is it me or has that air conditioning just gone off?’

“They didn’t know what I was going on about and the next thing I knew there were paramedics looking down on me.”

It turns out I’d had a seizure, a fairly major one. I realised that I’d passed out but didn’t quite comprehend what the paramedics were going on about. I was taken off in an ambulance to Peterborough City Hospital where they did some basic checks on me, asking what day it was and the like. Then they sent me for a CT scan and an MRI. When the registrar told me I had a brain tumour, I didn’t have Carolyn or any family with me for support and was in a complete state of confusion wondering what that meant.

“I didn’t know if I had hours, days or months to live.”

Carolyn had been working in London when she was told I was being taken into hospital. I never really appreciated the stress she was under as she rushed to be with me whilst organising family to rally around to look after our two boys, one of whom was in Year 2 and the other in reception class.

“No one lives closer than within 100 miles of us and it was my sister-in-law from Cheshire who dropped everything to come and help.”

I was in hospital for three days and that’s where Carolyn spent her 40th birthday. Thankfully, I’d been organised and had already bought and wrapped her present! My care was then transferred to Addenbrooke’s Hospital in Cambridge, which is a centre of excellence for neuro care, and I was discharged with a cocktail of drugs aimed at preventing me from having further seizures. 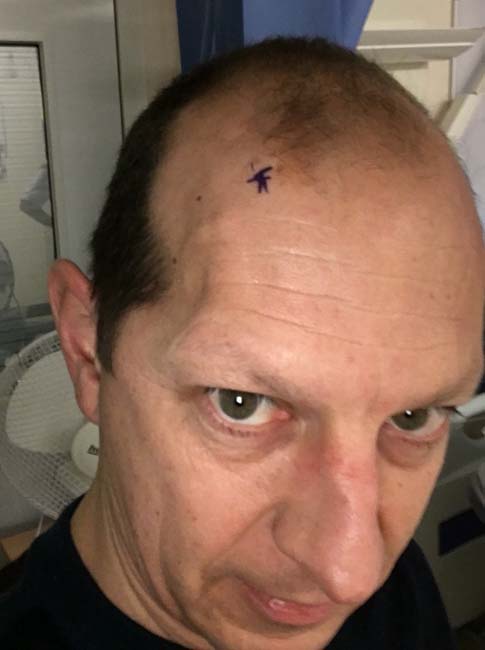 “I was initially told I had a 5x7cm diffuse intracerebral mass, likely astroglioma, which is like a spider growing through your brain and inoperable.”

You can imagine my surprise then, and relief, after I met the neurologist at Addenbrooke’s, who is an expert in dealing with these types of tumours. He contested what I’d been told previously and told me while it wouldn’t be possible to remove all of my tumour, it would be possible to debulk it. 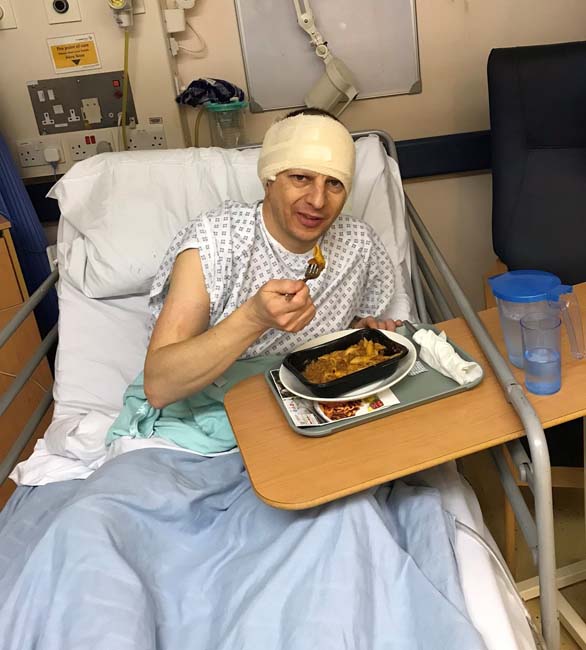 Three weeks after leaving hospital I went in for surgery. I was anxious but determined I’d be fine, and keen to reassure my family. Carolyn went shopping with a friend from university whilst I was in theatre. It lasted about eight hours and when I came to I wolfed down a ready meal she’d bought me from M&S, along with a pudding. Everyone was gobsmacked I wanted to eat so soon after surgery but I was famished after not having had anything for 24 hours.

I spent four days in hospital and recovered well. My hearing and sight were fine from the moment I woke up and I was able to get to and from the toilet within 24 hours. I was determined to be as normal as possible.

“My tinnitus lingered a bit but was nothing like it had been before the surgery.”

My GP’s wife had some sort of neurological condition not long before I was diagnosed and I felt like he had more empathy for me as a result. He had me go to see him about once a month to check how I was.

After a few months, I had a follow-up MRI and then met with my consultant to discuss the next step in my treatment. A biopsy determined my tumour was a grade 2 astrocytoma for which I was told there was no cure. I asked about the possibility of chemo, radiation or proton beam therapy but was told none were effective against the type of tumour I had. Instead, I was put on a ‘watch and wait’ monitoring programme’, returning for scans every three months.

“I returned to work after seven months and a year later discovered that I was struggling.”

I was still getting seizures occasionally and wasn’t managing to keep up with the intensive data side of things. I’d been with the company for less than three years but my employer was really good and, as well as reducing my hours to part time, allowed me to change to a market intelligence role, which I still do today. 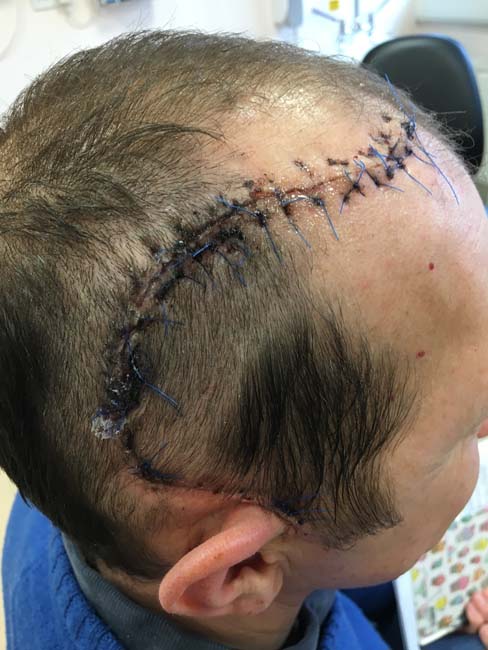 Eventually, my MRIs scans and reviews became less frequent, with me having to return every six months. Rather than just using contrast dye, I started having perfusion scans, which look at the blood flow around tumours. In 2018, I was told that while my latest scan hadn’t shown growth compared to the previous one, it had shown that my tumour had grown over the course of six years. By then, the way astrocytomas were treated had changed and I was given the option of having further surgery, followed by radiotherapy and chemotherapy.

I wasn’t sure what to do so I decided to talk to someone I knew in the brain tumour community. He had an oligodendroglioma and had gone through something similar. He was a bit younger than me but I wanted to understand how he’d coped with everything.  He was positive about it all and so I decided to go ahead with the treatment. 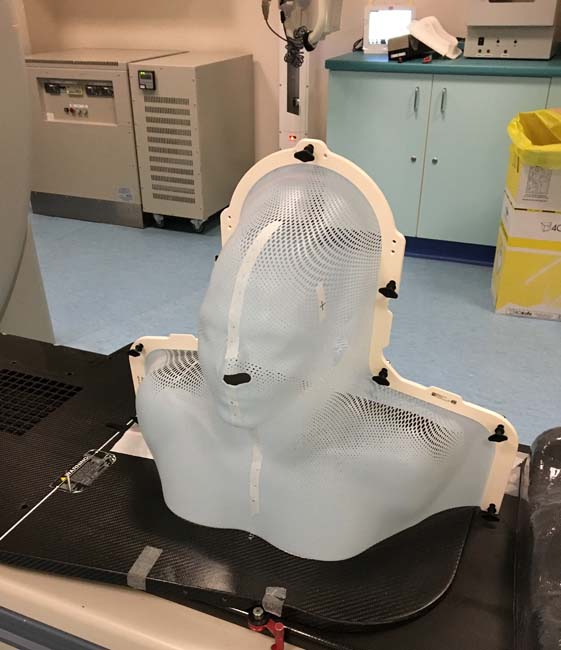 “Almost six years to the day after my initial surgery, I went in for another one, again at Addenbrooke’s.”

Afterwards, I spent six weeks during May and June travelling back and forth for radiotherapy, depending on my friends and family in Aspley Guise who very kindly gave up their time to take me. I lost a bit of hair but I was losing it anyway and Carolyn advised me that shaving it off would be a better look. I’ve stayed that way ever since.

Next I had 12 cycles of chemotherapy. It was oral-based, two weeks on, two weeks off, for six months. I remember being very tired for about a week after each round and having to take afternoon naps. I also had to have regular checks of my weight, blood and platelet count during the treatment. The biggest pain with that was the hour drive each way to Addenbrooke’s and the time spent waiting for medication, which was often several hours. This was an open frustration among patients in the waiting room. That said, I’ve been very impressed by how I’ve been treated by the NHS and this was my one sticking point.

“I’ve been on six-monthly monitoring scans since then but I got some good news just before Christmas.”

My consultant said as there had been no change since my treatment, as long as my next scan in June shows the same, I’ll be moved to annual scans. I’m really looking forward to that. 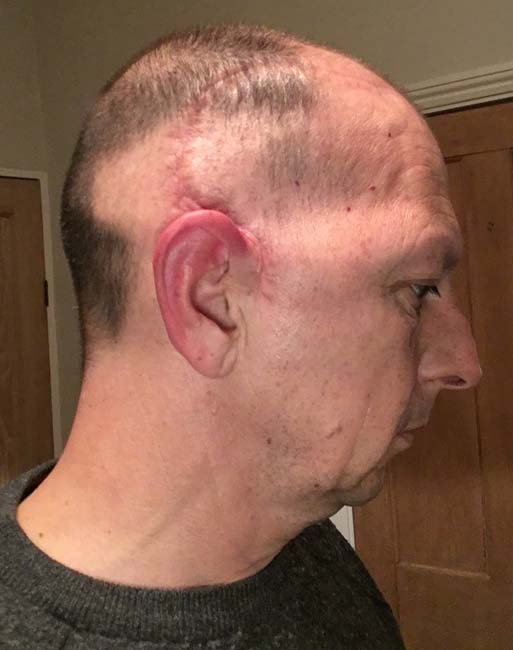 At the beginning of my journey, it would have been helpful to know more about what support is available to brain tumour patients. When you’re trying to handle the shock of your diagnosis, and with brain tumours not really being discussed in public, to be able to have contact with people who have been on the same journey, even just via Facebook groups, is invaluable. My MacMillan nurse was always very helpful too. She was available to answer any questions I had about my tumour, diagnosis and upcoming treatment, and definitely calmed my and Carolyn’s nerves.

“Being told your diagnosis isn’t a death sentence and being able to speak to someone who can offer you advice and emotional support is really helpful.”

Thankfully, Carolyn is the breadwinner in our household so we haven’t had to worry too much about my income. Plus my company looked after me by not cutting my salary when I was ill and allowing me to change job roles, but you do need to understand what help you’re entitled to from the government.

“My biggest problems have centred around losing my driving licence, understanding the minefield which is travel insurance and managing my epilepsy.”

Before my medication was sorted, it was hard not knowing when my seizures would come or why. I became a regular at A&E, dislocating both shoulders, and discovered I needed to maintain regular sleep patterns and cut back on my alcohol intake. 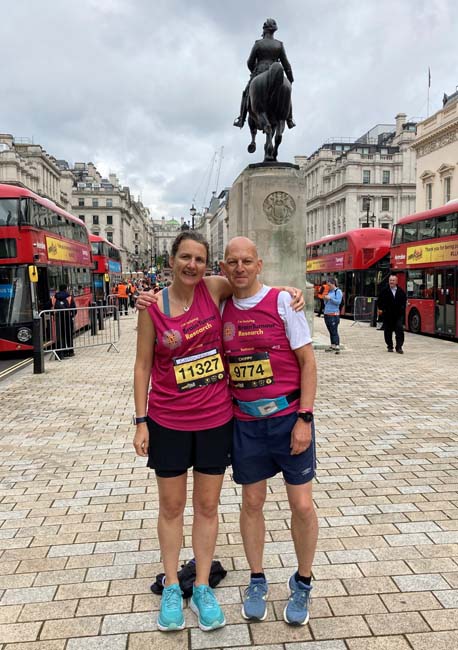 My running, which was a big part of my life pre-diagnosis and was maintained whilst I was on sick leave, was stopped for years because of my epilepsy. I rarely go running alone now but I have run three half marathons in the last two years, raising money for Brain Tumour Research in 2021 with Carolyn and a neighbour. I’m also pleased to say my brain tumour has not stopped me travelling. I took a trip to Australia in 2013 and also managed to ski in the Alps four times post-surgery before the pandemic grounded me. 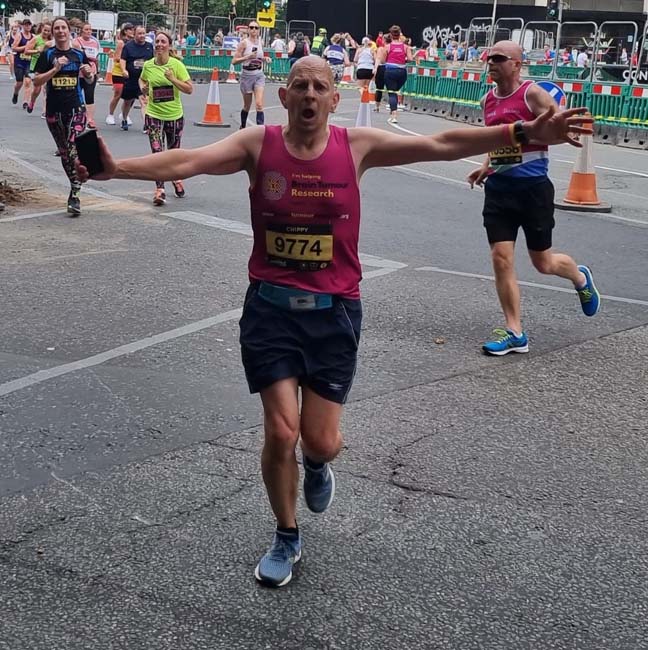 One misconception is that brain tumour patients don’t want to talk about their experiences but I’m happy to. I appreciated it when others were willing to share theirs with me and feel as if I’m giving something back now. Going through something like this changes your outlook on life by putting things into perspective and making you realise what’s important.

“I hope that others will be able to benefit from my experience.” 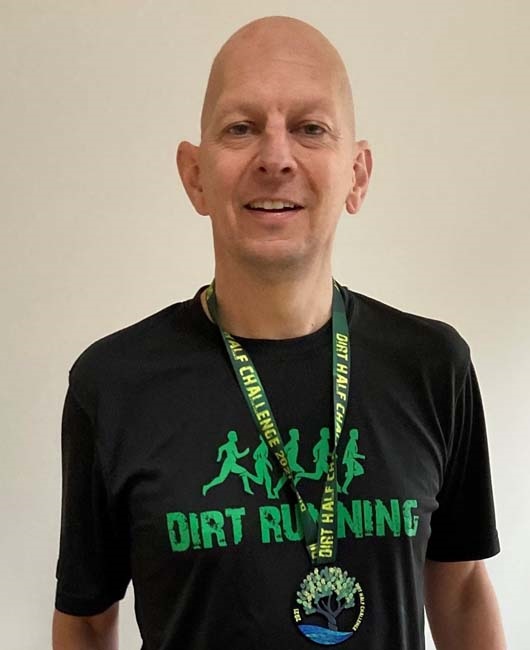