Samir Khatib, 66, was an active and fiercely intelligent father and grandfather when he was hospitalised after a major seizure. Scans identified a rapidly growing brain tumour needing urgent surgery. Samir suffered two heart attacks in the run up to his operation and a third immediately afterwards. Seeing the effects of all the trauma on her father’s speech and memory, his daughter Rahaf was prompted to campaign and fundraise for the cause.

“As we approached Baba, after surgery in the Neuro ICU recovery room, we were informed he was enduring yet another heart attack. Apparently it started while they were still closing him up in theatre. We were all in disbelief. Our optimism that the worst was over evaporated, as we saw that it was in fact just the beginning.”

Here is Samir’s story, as told by his daughter Rahaf Khatib…

My father is my real-life superhero. I still can’t believe that he collapsed, having a seizure, while just taking out the trash.

My “Baba” has always been fiercely intelligent, strong willed and very active. I was born in Damascus, Syria, and he moved us all to the United States when I was a baby. It was during a religious pilgrimage last year, going to Mecca for Hajj, that he started experiencing tremors. His right hand and leg would shake slightly and, looking back, he had lost a lot of weight over the previous year.

He had no history of seizures until the day he collapsed towards the end of September 2017, three days after he returned from Hajj. A neighbour noticed Baba calling for help from the driveway and phoned for an ambulance. It was very scary. An MRI scan identified three small lesions in his brain but initially it was thought he had some kind of infection. I knew from the doctor’s face that the news wasn’t good.

None of us were prepared for the results of his follow-up scan two weeks later: the lesions had combined and were growing rapidly. Baba needed an operation. The family were all stunned, but worse was coming. As the biopsy date approached, my father suffered a heart attack and then another. It was really difficult. His weakened heart meant that some medications were now off the table and his brain surgery would need to be limited to two hours which is nothing for neurosurgery.

One of my father’s favourite holidays, Thanksgiving in November, was spent in the hospital awaiting his brain surgery. His operation went pretty well with the surgeons able to remove 90% of the tumour, but they identified his specific tumour type as glioblastoma multiforme (GBM), stage four. It’s a really aggressive form of brain cancer; the tumour had put out roots into the surrounding brain which meant it was almost impossible to completely remove.

As we approached Baba, after surgery in the Neuro ICU recovery room, we were informed he was enduring yet another heart attack. Apparently it started while they were still closing him up in theatre. We were all in disbelief. Our optimism that the worst was over evaporated, as we saw that it was in fact just the beginning. It was horrific, they couldn’t give him anything because he had just had major surgery. I remember him being conscious and squeezing my arm so hard it went numb.

My father endured eight hours of agony from the third heart attack. Despite all that he was going through, Baba never gave up hope on the power of prayer and faith. He prayed in his hospital bed, only two hours after brain surgery and during his heart attack, after hearing the call to prayer alert from my phone. It was so emotional to see his bravery. I was in tears.

Baba was in hospital for two more weeks. He’s a chemical engineer and science is his passion so he has great respect for medical professionals. Baba even donated part of his tumour to help research. He trusts the doctors, he trusts science to make him well, so he eagerly accepted his oncologist's treatment plan of chemotherapy and radiation. I had doubts, they are notoriously brutal therapies and he was weak after the surgery and multiple heart attacks. The family were all scared for his future, but he continually amazes us with his strong spirit. I am just in awe of his courage in the face of suffering.

The tumour was above my father’s left ear and it has affected his memory and his speech. He speaks both Arabic and English, but now he stutters and finds speaking difficult. We can’t always understand him. Baba is usually so full of stories and opinions, and it’s hard to see that change. He was previously very active so it’s also tough for him being cooped up at home, losing some of his independence. Thankfully he can walk and look after himself at least.

Everyone has had to make a huge adjustment to this new situation. Mama hasn’t been sleeping well, she is so worried about him, like we all are. Baba is currently stable and we are just taking it day by day. We all hope that the tumour won’t grow back but of course the statistics disagree. I never in a million years imagined that all this would happen so quickly, so traumatically, but I simply can't stand idly by.

I’m a stay-at-home mom with three kids but I’m also a marathon runner. I only started running about six years ago, when my children weren’t babies any more, quickly getting into half-marathons, marathons and triathalons. It’s become a massive part of my life, particularly as I’m Muslim and run in a hijab (headscarf). When I started there weren’t many runners who looked like me and I began posting on Instagram, under the handle @runlikeahijabi, to show that a hijab doesn’t stop you getting active. It took off and I became the first Muslim woman to wear a hijab on the cover of a US fitness magazine.

My ultimate goal is to run in six of the world’s major marathons, so far I have run the Berlin, Boston, New York and Chicago marathons. Next up is Tokyo in February. I always planned on running the London marathon as the last of my six, and when I saw that I could fundraise for Brain Tumour Research it was a no brainer for me. This is my way of making a difference by doing something I’m good at, to help people like my father. There’s not enough research being funded for this type of cancer and I know Baba will be proud of me.

If you have been inspired by Samir’s story, you may like to make a donation via www.justgiving.com/fundraising/rahaf-khatib or leave a gift in your will via www.braintumourresearch.org/legacy 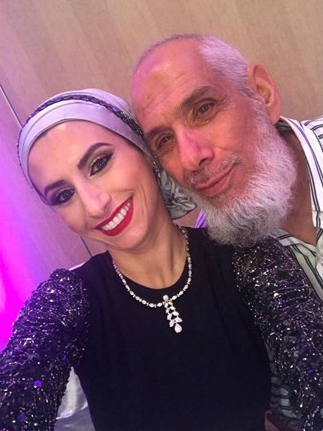