Former cabin crew Samantha Toomey, from Northamptonshire, was diagnosed with an aggressive brain tumour after struggling to get her words out during a phone call to her partner, Tom. Having undergone awake brain surgery, radiotherapy and chemotherapy, 31-year-old Samantha was told her chances of having a baby had drastically reduced and she and Tom went through the process of freezing embryos, with a view to starting a family via IVF. However, in April 2021, they were delighted to discover they’d conceived naturally and baby Billie was born in December. Samantha and Tom are now looking forward to their wedding next month, where baby Billie will be guest of honour.

On 22 December 2017, I was at home in Northampton and Tom was at the Emirates Stadium in London, where he’d been watching the football. After the game, he called me and was shocked to hear that my words were all jumbled. I was aware that I wasn’t making any sense but I didn’t understand why. Tom couldn’t work out what I was talking about – he thought I may have been drunk, which definitely wasn’t the case. Tom called my brother, Dom, to come and check on me and when he got to me, he rang NHS 111, as he was also worried. They sent a first responder and I was taken to Northampton General Hospital.

When I got to hospital, the doctors did a CT scan to investigate a possible cause. Shortly after that, I was admitted to the stroke ward where I stayed for the next couple of nights. I knew there was a possibility that it could have been a stroke but being so young it didn’t sit right in my mind, I felt like my instinct told me there was more to it than that. Then, on Christmas Eve, I was given a more detailed MRI scan. A few hours later, Tom and I were told that I’d been diagnosed with a brain tumour. Even though I’d suspected it was something other than a stroke, a brain tumour never crossed my mind. 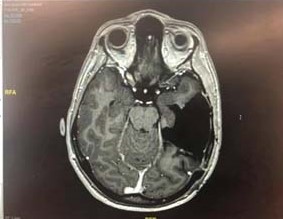 “When the doctor delivered the news, I passed out with the shock.”

By the time my mum and dad arrived, I felt alright and was beginning to come to terms with the diagnosis. In a way, I was glad I finally knew what was wrong with me. For some time, I’d been going to the doctors repeatedly, complaining of exhaustion, fatigue and headaches and each time I’d be tested for anaemia. The tests results would always come back confirming I wasn’t anaemic but we never got any closer to finding out the cause of my symptoms. I was working as cabin crew for easyJet at the time, so I sometimes thought that the tiredness was down to the long hours I worked. Flying for a living takes it out of you and I would often have to get up very early for my shifts. But deep down, I knew there was something else going on. On one occasion, I got really upset talking to my mum about my symptoms and she called the GP on my behalf, as I was in tears. Still, nothing came of it and in the end, I gave up trying.

I was referred to the John Radcliffe Hospital in Oxford where, in January 2018, I was told the mass inside my head looked like a grade 2 (low-grade) tumour, which they would attempt to remove during an awake craniotomy. 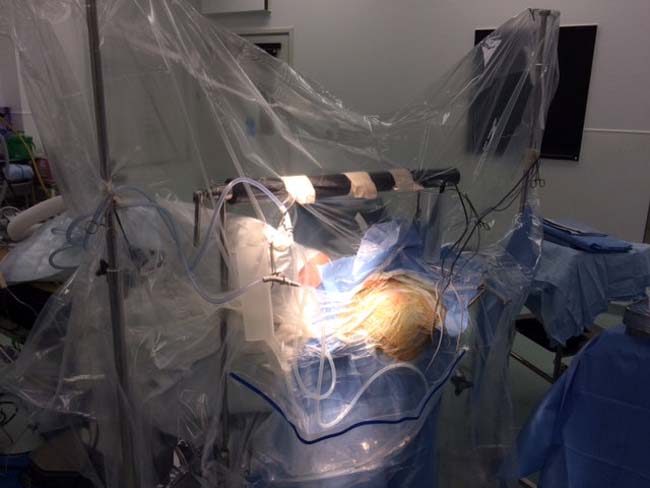 My surgery was on 15 July 2018. I wasn’t scared going in for the operation. I was intrigued about the process and just wanted to get it done and get the tumour out. I felt really comfortable in the care of my amazing team. Even though I knew the risks were significant, at no point did I think anything would go wrong. 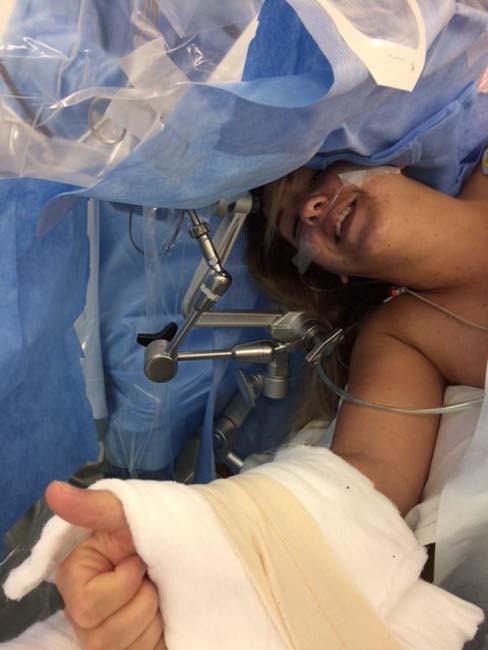 “The operation lasted nine hours, during which my wonderful surgeon, Mr Puneet Plaha, managed to remove 90-95% of the tumour.” 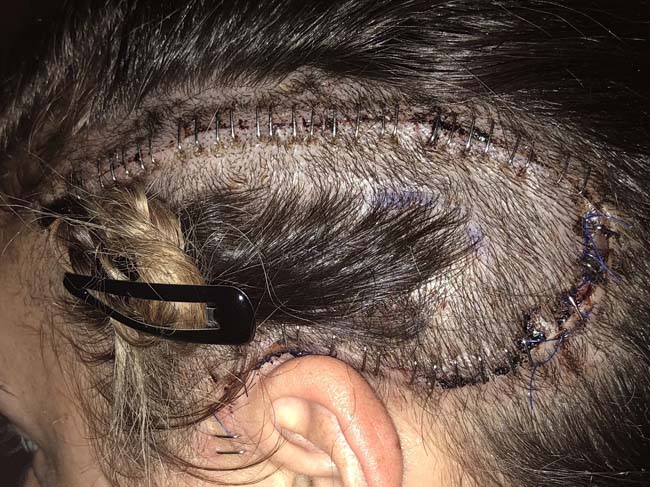 The care I received was fantastic – I couldn’t fault any of the team looking after me and it was such a relief to get through the procedure relatively unscathed. The histology report revealed the tumour was, however, a grade 3 astrocytoma, which wasn’t the result I was hoping for and meant I would need further treatment, beginning with six-and-a-half weeks of radiotherapy at Northampton General. 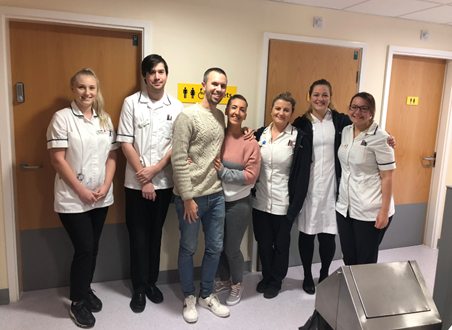 Thankfully, the radiotherapy whizzed by and I was lucky enough to meet some of the loveliest people, both staff and patients, during my daily trips to the hospital. Other than a bit of tiredness, dry skin and some big bald patches on my head, I didn’t suffer with too many side effects and I think I got off lightly. I tried to keep active throughout. Even though lots of kind people offered me lifts to and from the hospital, I declined their offers and would walk instead. I’d also take our miniature dachshund Darcie out for long walks. At the same time, I was sensible, and if I was tired in between my treatments, I would sleep. 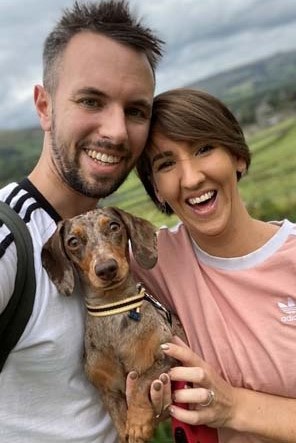 My radiotherapy was followed by a trip to Paris, where Tom proposed and, in November 2018, we returned home newly-engaged, ready for the next stage of my treatment, 13 weeks of Temozolomide (TMZ) chemotherapy. 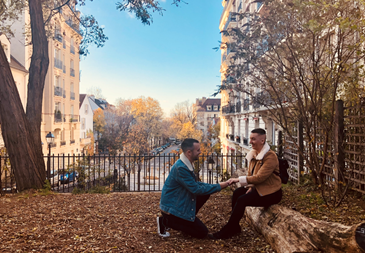 Before my chemo began, however, we went to a fertility clinic in Oxford and decided to go ahead with the process of creating and freezing embryos to preserve for the future. We’d always talked about having a family, so when the doctor mentioned that my cancer treatment could reduce our chances of having a baby, we were very keen to increase the possibility of getting pregnant. Incredibly, the fertility treatment resulted in 18 embryos being frozen from 47 eggs, which we were told was a fantastic result. 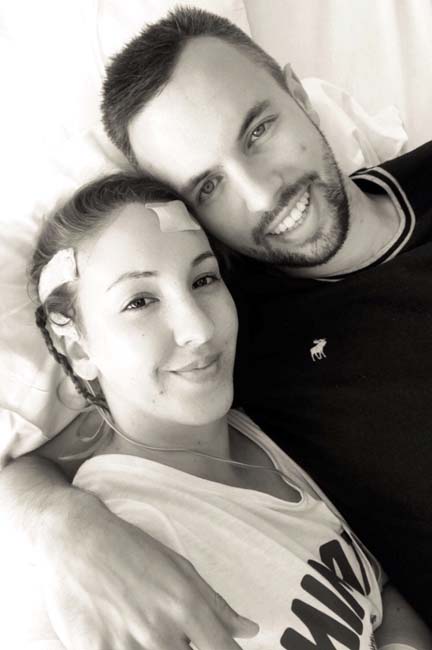 I went ahead with the chemotherapy, coping relatively well throughout and I finished chemo in February 2020. Happily, my scans have remained stable ever since. In January 2021, Tom and I decided we were ready to think about using the embryos but after going through fertility tests and speaking to the clinic in Oxford, we were advised to try naturally before attempting IVF. Just two months after we began trying to conceive, in April 2021, we were thrilled to find out that we were expecting our first baby. We were over the moon but also in shock. It was a huge surprise for it to happen so quickly.

Other than morning sickness, my pregnancy was straight forward and I had no complications along the way.

“We found out we were expecting a little girl, who was due to be born on 23 December 2021 – almost four years to the day since I received my devastating diagnosis.” 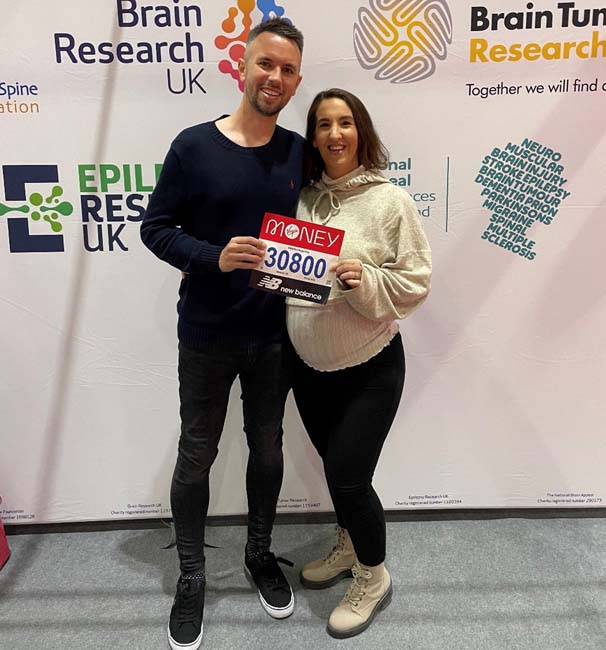 In October 2021, Tom took on the 26.2-mile London Marathon to raise money for Brain Tumour Research. We’d originally signed up to run the event together, when it had been due to take place in April 2020. I’d had to pull out because I was on chemo for longer than I’d anticipated but then it got postponed anyway, because of the pandemic. By the time the rescheduled marathon came around, I was seven months pregnant, so my involvement was supporting Tom rather than running myself. I was so proud of him. He ran it in 4 hours 37 minutes, which is incredible, and the atmosphere on the day was out-of-this-world. Raising almost £4,000 for the charity was the icing on the cake – that’s nearly enough to sponsor 1.5 days of research at one of the Brain Tumour Research Centres of Excellence. 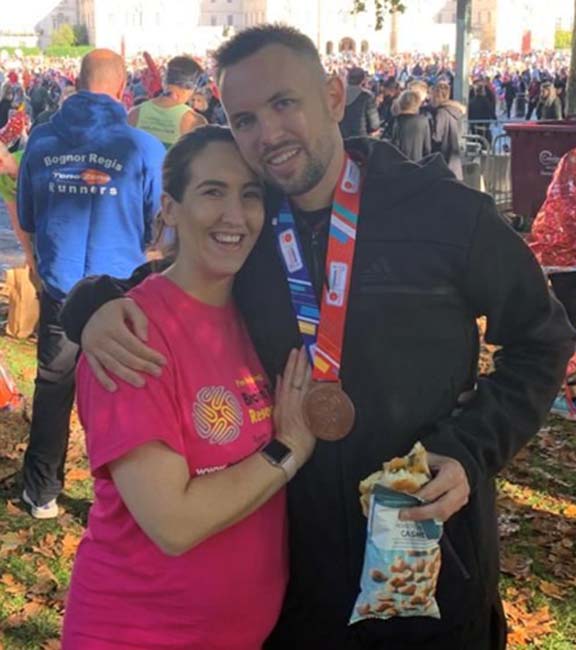 Just a little over two months after the marathon, on Thursday 16 December, our darling daughter Billie was born. She arrived a week early, by planned caesarean section. Due to the possibility of pressure on the brain during child birth, they didn’t want to risk a natural delivery. The birth was fine. Once again, I had a great team, who all put me at ease. We had music playing in the operating theatre and as Billie was born, a song Tom and I love was playing. It’s a cover of a track called Send Me On My Way by Guy Meets Girl, which the two of us discovered during my pregnancy and both fell in love with. Billie was born at 3pm on the dot, which Tom was particularly happy with, as he said it was ‘kick-off time’! 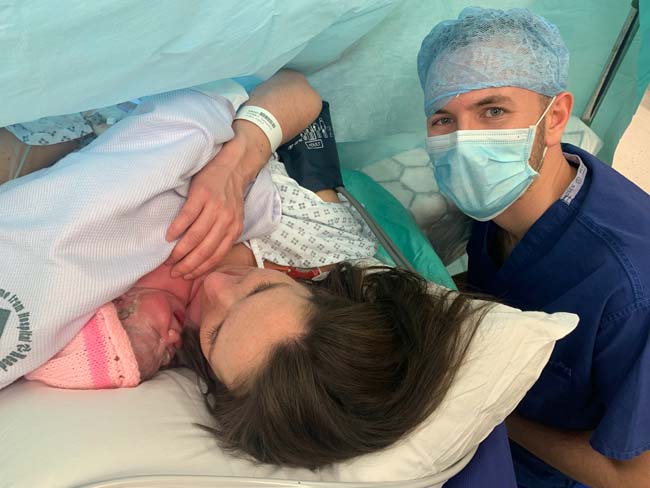 Billie is now three months old and she’s an absolute dream. She loves her sleep and her milk and is really chilled. Tom has taken to parenthood brilliantly and loves being a dad – he’s a natural. We’re both smitten and can’t imagine life without her. 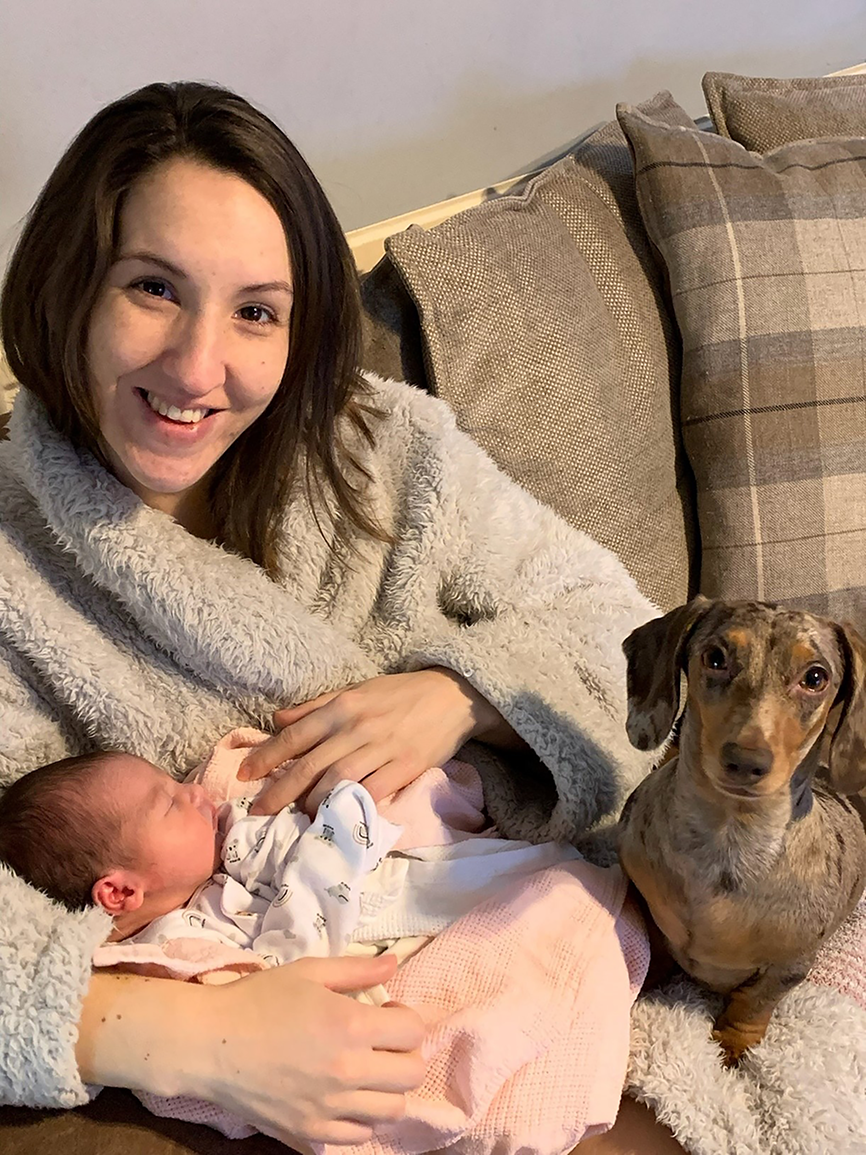 Tom and I will finally tie the knot next month at a ceremony at Dodmoor House in Northampton. The venue will be at full capacity with all of our family and friends there – some travelling from overseas – to spend the occasion with us. It’ll be such a special day – having originally planned to marry in August 2020, we’ve postponed the wedding several times. But as they say, everything happens for a reason, and the fact that Billie will be there with us will make it extra magical and I wouldn’t want it any other way.

I still have MRI scans every three months. I had my last set of scan results a month ago and they showed no signs of tumour growth. I always feel anxious in the run-up to scans and getting the results but I try not to let it get to me. Life is too short to spend it worrying and I’ve a lot to be happy about. 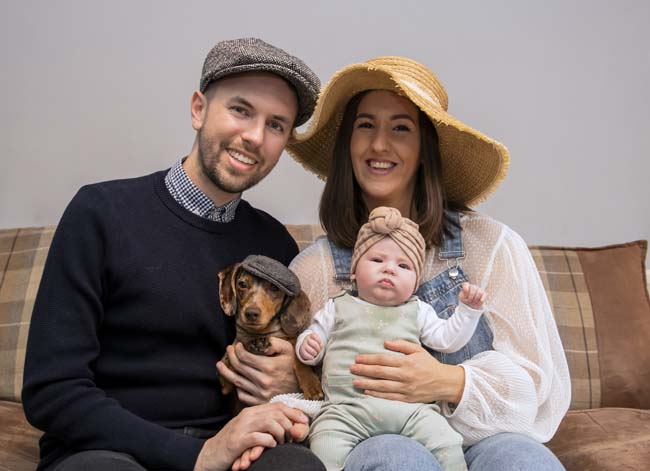 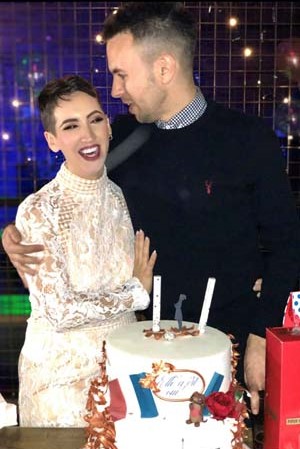