Professional DJ and keen rugby player, Rob Tillen, from Thornbury in South Gloucestershire, was diagnosed with a brain tumour in August 2021, after an optician sent him to A&E following a routine eye test. First suspected to have suffered a stroke, a CT scan revealed Rob had a mass in the left side of his brain and a biopsy later revealed it was a glioblastoma multiforme (GBM), meaning his prognosis is a stark 12 to 18 months. Following successful surgery to remove the tumour, Rob underwent radiotherapy and is currently on chemotherapy to try to delay the inevitable regrowth of his tumour. His fiancée, Annabel, who Rob is due to marry this summer, is fundraising to help pay for costly private treatment overseas, in a bid to extend his life.

Rob and I met 10 years ago at a nightclub in Bristol, where he was DJing. Music is Rob’s life; he used to be a music producer and even had a hit with a group called The Purple Kings in 1994. The track, called ‘That’s the Way You Do It’, reached number 26 in the UK charts. Rob has been DJing since 1984 and before his brain tumour diagnosis, he had a show on London Music Radio, which he broadcast from our home studio every Friday evening. Just four months on from receiving the shock news, life is already very different for Rob. 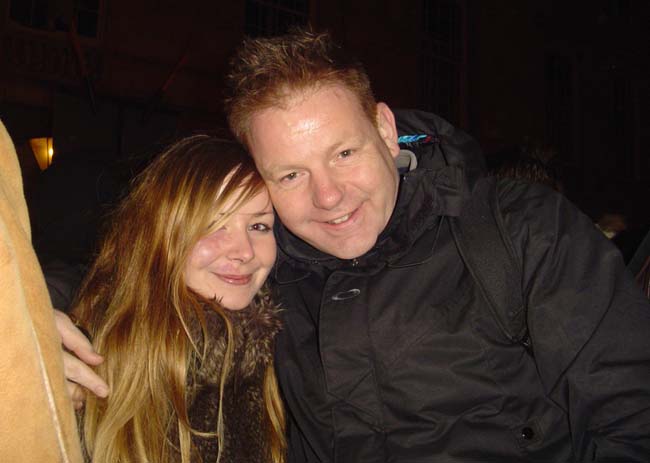 In the late spring of 2021, Rob was in training for a Tough Mudder event, which he’d signed up to do with some friends in Henley-on-Thames on 17 July. He was out running one day in June, when suddenly he felt like his vision had ‘shifted’ to one side. He said it looked as though everything was ‘lop-sided’. The problem came back every now again over the next few weeks. It was sporadic; not bad enough to cause Rob great concern and he managed to do the Tough Mudder without any issues whatsoever. However, by the end of July, his vision was getting worse and one day in August, he had his first ever migraine, which lasted a whole day. He decided to make himself an optician’s appointment and on 11 August, he went for the eye test at Specsavers in Thornbury.

“Not long into the appointment, the optician spotted something behind Rob’s eye, which indicated he may have had a stroke. He sent him straight to A&E at Southmead Hospital in Bristol.”

I don’t drive because I have multiple sclerosis (MS), which was diagnosed during the first wave of the coronavirus pandemic. My mum drove us to the hospital at around 6.30pm and the two of us had to drop Rob off at the doors, COVID-19 restrictions dictating that he had to go in alone. I went home, waiting for news and at 1am the next day, Rob called asking me to come back to Southmead. My stepdad drove me there and I went in to find Rob, who took me into a bay and told me they’d found a brain tumour. I was totally blind-sided. I asked him if it was cancer and he said he didn’t know. Naively, we both thought if it was a tumour, they’d be able cut it out and that would be then end of it. We later realised how wrong we were.

Rob had to stay in for a couple of nights, before being sent home with steroids, to help reduce the swelling in his brain, which had been causing the symptoms. A few days later, we had a meeting with a neurosurgeon, who presented us with the treatment options. He recommended the best option would brain surgery to debulk the tumour, followed by the NHS standard of care; six weeks of radiotherapy and concurrent chemotherapy, followed by several months of higher-dose chemo. We looked at the MRI scan images and could see it was a big tumour – 4cm x 6cm in size – located in the left side of Rob’s brain, at the back.

“On 23 August, just 11 days after his diagnosis, Rob had a craniotomy. His surgeon was absolutely amazing, managing to remove at least 98% of the tumour.” 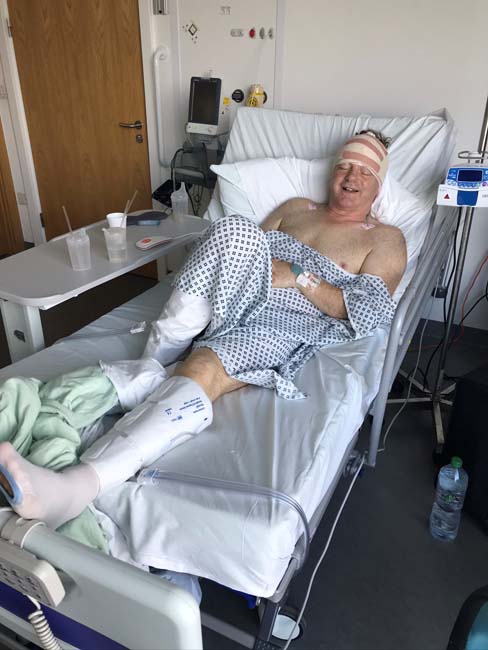 The post-op scans showed no signs of the unhealthy cells left in his brain but we had been warned that the tumour looked like it was aggressive and therefore likely to grow back. I said ‘thank you’ to the surgeon before Rob left the hospital but it didn’t feel like it was enough; there were no words to express my gratitude. We’d been told Rob would stay in hospital for around 10 days but after just two nights, they said he was well enough to come home, which was a huge relief. 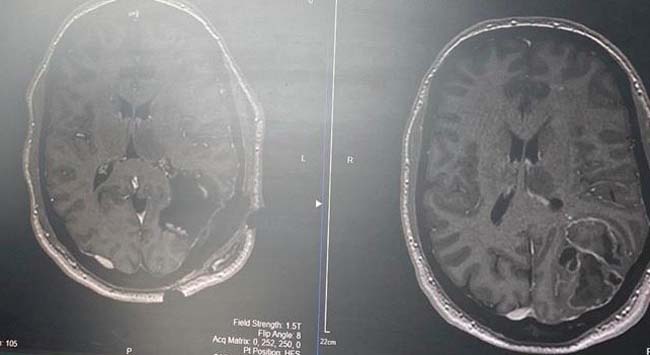 On 2 September, we had another meeting with the surgeon, during which he confirmed the tumour was a grade 4 glioblastoma multiforme (GBM). It wasn’t a surprise, as we’d been told it looked like a high-grade tumour before we got the biopsy results but hearing the prognosis was hard. Rob asked about his life expectancy and a nurse, who was also in the meeting, replied: ‘Are you sure you want to know?’. Rob did want to know and without much hesitation, the surgeon delivered the grim news that it was approximately 15 months. We were devastated. 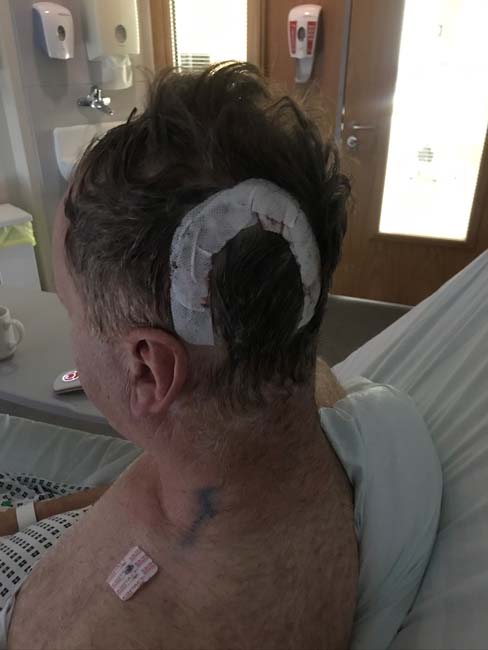 Rob had his radiotherapy mask fitted at Bristol Royal Infirmary (BRI) on 20 September – a procedure he hated because he suffers from claustrophobia. His first session of radiotherapy was on 7 October and he started taking oral chemotherapy at the same time. My mum took him to and from Bristol every day for six weeks. The treatment made him very tired but he did OK on it, managing to keep up with his daily dog walks. Rob has a 16-year-old son, Teddy, who lives in London, but we don’t have any children together. Our cocker spaniel Benson is like our ‘child’ and taking him out regularly has given Rob something positive to focus on. 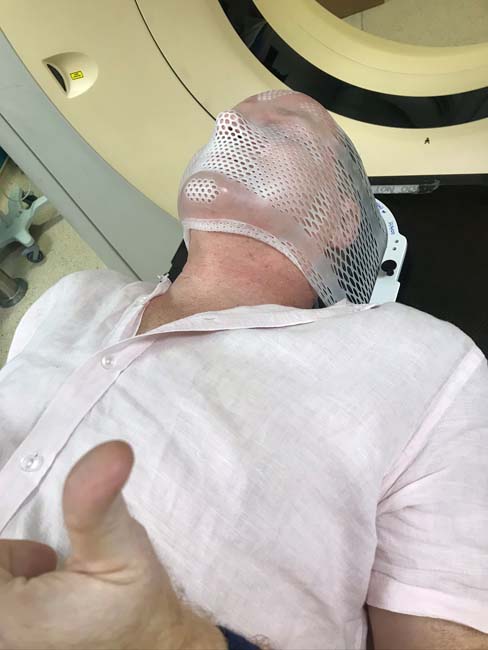 He’s now on a higher dose of chemotherapy, which makes him feel really sick. Ginger soup is one of the only things he can stomach when he’s feeling particularly bad on it. As well as the physical symptoms, the diagnosis and its impact has been hard for Rob to deal with mentally. He’s such a busy and active person usually, playing rugby union for Thornbury RFC and before that, Chiswick. Aside from his sport, he’s such a music-orientated person and really misses his DJing. He hates sitting around doing nothing. For him, it’s a nightmare. Until his diagnosis, Rob was my carer but the tables have turned and I’ve had to step up and look after him. I work full-time in credit control for Europa Group Ltd, so it’s a real juggle, especially on top of my MS. Luckily, I can work from home, which makes things a lot easier. 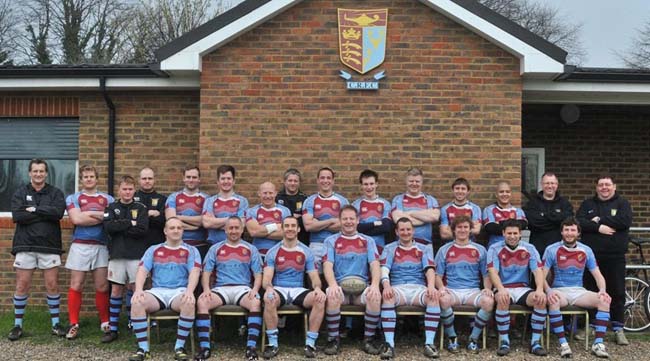 Rob’s first post-operative MRI scan will be in February and we’re just praying it will show that things are stable. After that, he’ll continue to be monitored with three-monthly scans. Rob proposed to me in May 2021, on our 10-year anniversary. We’ve set the date of our wedding for July 2022 and can’t wait to celebrate with all of our friends and family. The ceremony will be at St Mary’s Church in Thornbury and we’re having the reception in Thornbury as well, at the rugby club. I know it’ll be such a special day at it’s really giving us something wonderful to look forward to. 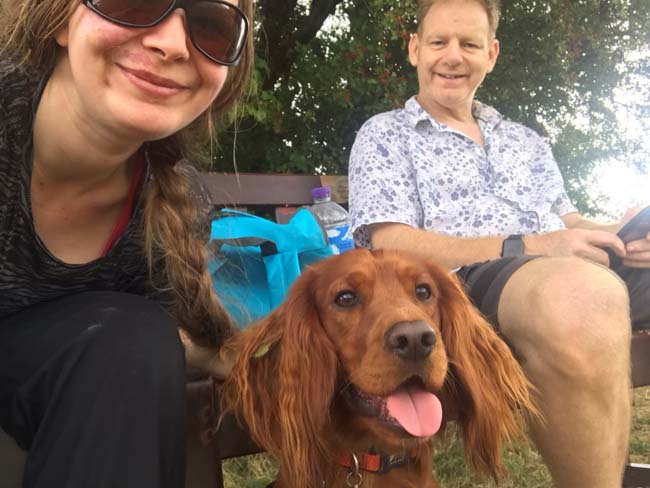 “I’m all too aware that there are limits to Rob’s treatment options on the NHS so, not long after his diagnosis, I began researching other avenues.”

My research led me to private treatment available at a clinic in Germany, called CeGat. They can potentially make targeted peptide vaccines, which we believe will give us the best chance of extending Rob’s life. The treatment is personalised and would aim to encourage Rob’s immune system to attack the tumour. But it comes at a huge cost. We need to raise £350,000. I’ve set up a GoFundMe page and have received £770 in donations so far, which I am very grateful for but I still have a mountain to climb. To encourage donations, I have set myself the challenge of walking 500 miles over six weeks. I started on 11 December and will finish on the last day of January. My ‘MS legs’ often feel heavy and I get pins and needles a lot but thinking of Rob and everything he’s going through gets me through it. We had already switched our diet to vegan in May 2021, before we found out about Rob’s tumour but we’re continuing to eat a plant-based diet, in a bid to keep Rob as healthy as possible. I feel the pressure to give him every possible chance of beating this disease and I will continue looking after him, researching alternative therapies and being by his side for as long as I can. 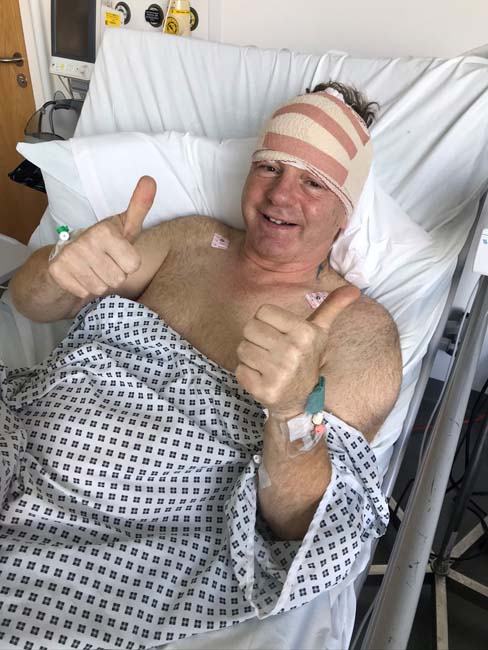 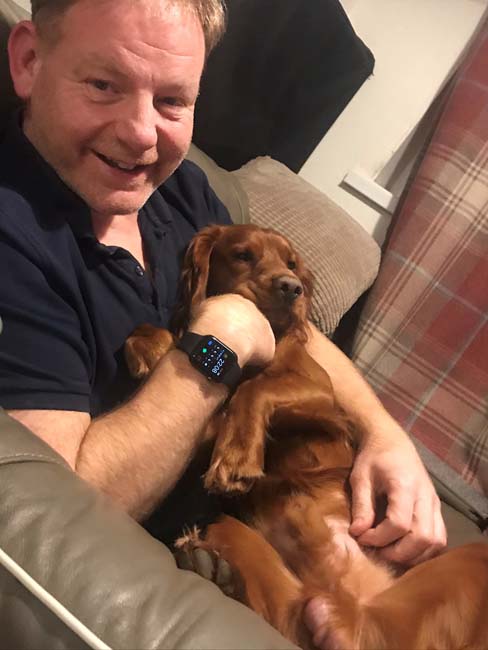