Reuben Coe, 17, first became ill during a school geography trip. Within days he was diagnosed with a brain tumour in Lancaster and he and his mother Karen waited for an emergency ambulance to transfer them to Manchester Children’s Hospital. After five months of treatment, Reuben is now back at school studying for his A levels.

His mum Karen tells his story …

Along with his twin sister Anna, Reuben was studying at Ripley St Thomas School in Lancaster. He had been on a geography field trip in December 2013. He came off the bus and said he’d had a really bad headache and was sick. He had been doing experiments with river water and, when the headaches got worse at the weekend, I thought perhaps he had picked up something nasty like Weil’s disease on his trip.

Reuben was in pain throughout the weekend and still had the headache when he came home from school on Monday. He went back the following day but I got a call to go and collect him as he was unwell. He had no temperature, I knew it wasn’t meningitis and still wondered whether it was some kind of infection connected to the river water.

On the Wednesday he stayed home from school and I took him to the doctor. We saw the nurse who said it was a virus. That evening, Reuben stayed at home while we went to see his sister in a school concert. I sat next to a friend who is a GP and told her what had happened and that I was anxious. She told me to go straight home, get Reuben and take him to the out-of-hours medical service.

When I arrived home to collect him, Reuben was in severe pain. I dialled 111 and an ambulance was dispatched. We were taken to the Royal Lancaster Infirmary. By the time we got there he was sound asleep; I thought he was unconscious. An antibiotic drip was set up and, when Reuben woke up the headache was gone.

Reuben was taken for a scan and that was when we were told the news that he had a brain tumour and would be transferred to Manchester Children’s Hospital.

It seemed unbelievable. He had only been ill for a few days and there we were being told he had a brain tumour. Another scan was done at Manchester and I was shocked when I saw the image. The tumour was 2.8cm and I couldn’t understand how it had grown so big without making him really poorly.

We were told that because of Reuben’s age the tumour was mostly likely to be a germinoma which was treatable with chemotherapy and radiotherapy.

Reuben went into hospital on Thursday 14th December 2013. He had a procedure to relieve pressure, a right ventriculostomy. He also had a biopsy to determine what type of tumour it was. Reuben was allowed home for Christmas as we awaited the results of the biopsy. Before New Year came we were given the results. The tumour was a non-secreting germinoma of the pineal gland. It was explained to us that, at about three or four weeks of gestation as Reuben was developing, a cell which should have travelled towards the testes to become a sperm had gone instead to his brain. In January, Reuben started on the European SIOP CNS GCT II prospective trial for the diagnosis and treatment of children, adolescents and young adults with intracranial germ cell tumours. For Reuben this involved four treatments of chemotherapy to shrink the tumour followed by five weeks of radiotherapy to prevent it recurring. At first he had scans every four months but the frequency has now dropped to six-monthly.

We had a divide and conquer approach while all this was going on. I looked after Reuben while my husband, Pete, looked after Anna and tried to minimise the disruption to her life. When something like this happens, there is no choice you just have to get on with things. Reuben continued to go into school during his treatment when possible but having missed a lot of lessons decided to repeat the year. He is studying A levels in maths, physics, geography and product design and although delayed for seven months he now has a provisional driving licence and is thrilled to be learning to drive.

We have been told there is an 88 to 90% chance of the tumour never returning. We have been very lucky as Reuben’s brain tumour was curable.

For us, life is back to normal (whatever passes for normal). Many others aren’t so lucky. Brain tumours kill more children and adults under the age of 40 than any other cancer … yet just 1% of the national spend on cancer research is allocated to this devastating disease. We are telling Reuben’s story in the hope it will help Brain Tumour Research to achieve its aim of funding seven research centres where scientists are working to improve outcomes for patients and, ultimately, a cure for brain tumours. 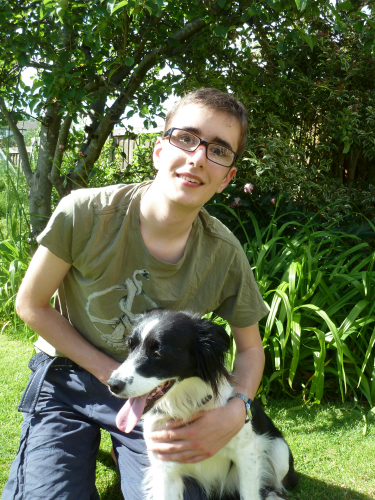