Pippa Simpson was 18 and had just left her family home in West Yorkshire to study popular music at Goldsmiths College in London, when she first had a seizure. That was in December 2017. A year later and following another seizure, Pippa was diagnosed with a very rare brain tumour; a grade 3 anaplastic pleomorphic xanthoastrocytoma (APXA). Facing gruelling cancer treatment, Pippa left London and moved back home to Wharfdale, near Leeds.

My sister Lara had suffered from absence seizures as a child and so when I first started having them, I never imagined that they would turn out to be a symptom of my brain tumour. I had been on medication for epilepsy for over a year but the diagnosis came completely out of the blue, following a precautionary MRI scan, after I felt unwell whilst on a run with my other sister, Anna. 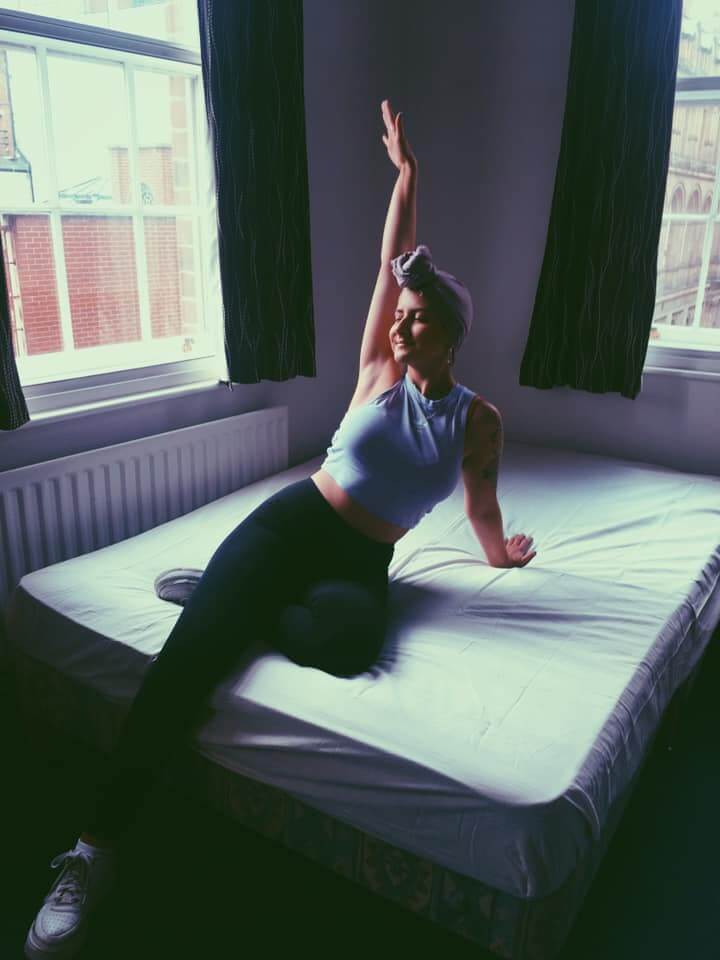 The discovery of my brain tumour was completely devastating. I experienced shock on another level. I remember walking to the toilet holding back the tears, then the second that door was locked I just howled. I’ve never cried like that before. It was a different kind of pain; a pain that felt like grief but who or what was I grieving? I guess I knew my life was going to be completely different to how I expected at 20. A week later I met my surgeon and before I knew it, I was under the knife at Leeds General Infirmary (LGI) for five hours of neurosurgery to debulk the tumour. Forty-eight hours after coming out of recovery, my surgeon sprung around my cubicle curtain exclaiming that I was good to go home, despite the fact I hadn’t yet been able to make my way (independently) to the toilet, without throwing up. He also turned up whilst I was asleep and without any warning, whipped the bandage around my head straight off. I’ve literally had plasters for paper cuts on longer than that! 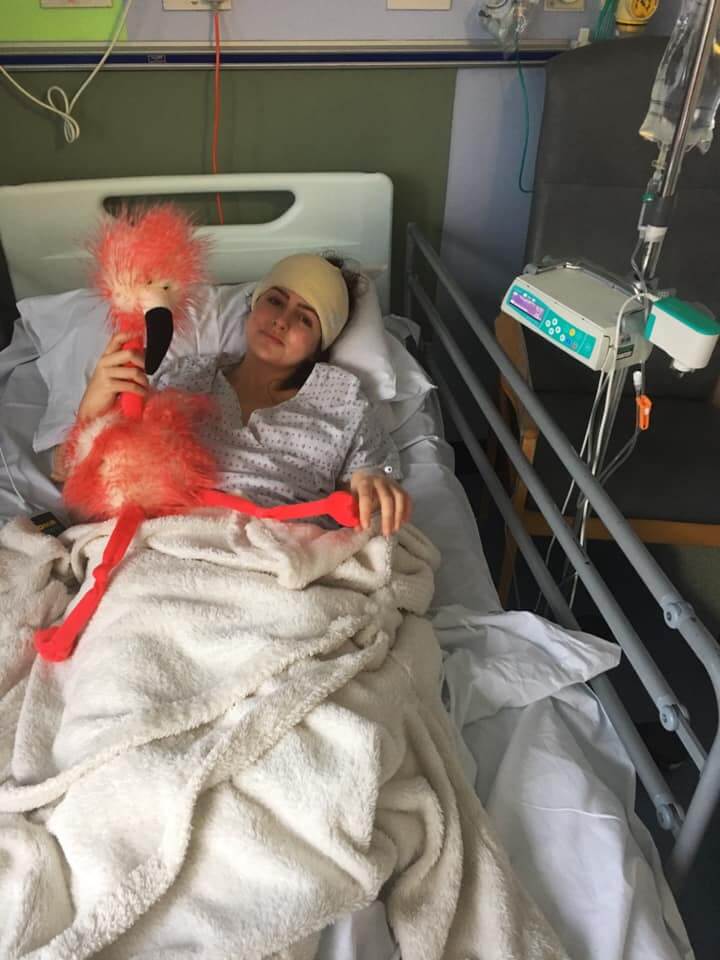 Following surgery, I recuperated at home with my mum and sisters rallying round to look after me. They were amazing. My mum, aka. “queen of lists”, took note of the specific hour, minute and second I had to take my pain relief. It was like she had turned into some kind of superhuman nurse, mathematician, cook, hairdresser, pharmacist and counsellor – all in one!

The day of the biopsy results came around and I couldn’t help but notice the tension in the consulting room. My gut has been pretty good at telling me when I’m about to hear bad news, and I got the same feeling I had when my neurologist called to tell me “something had come up on the MRI”. They told us it was a higher-grade abnormality than they expected. There are no words that can accurately describe how I felt hearing this news.

“My stomach dropped and I felt a lump in my throat the size of a golf ball. I was literally shaking from nerves. I was just angry; I didn’t want a hug, I wanted to punch something.”

After a good old cry, I was ready to ask further questions. They explained that my tumour type is very rare, but seen more in young people. Because it was aggressive, I would need to undergo six weeks of radiotherapy. The doctor gave me a reassuring pat on my shoulder and left the room.

I didn’t mind the radiotherapy and thankfully didn’t suffer from many side effects. Losing my hair was the most traumatic thing. Before treatment my hair was long, thick and brown – it was one of my best features! The fear of losing it was real. 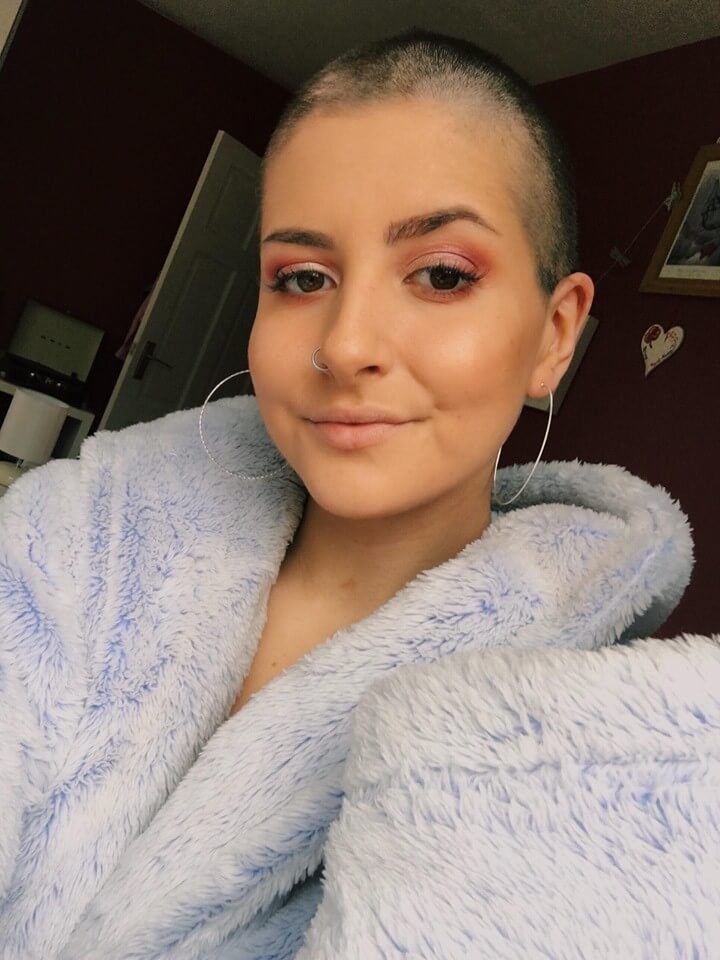 “I thought I’d got away with it but then three weeks into the radiotherapy, I woke up one morning to find clumps of my hair all over my pillow. Over the course of three days it continued to fall out, leaving me with huge bald patches.”

I despised it and didn’t want to be seen in public. I hated feeling unattractive; I had come out of the teenage insecurity phase when I was 16 and then found myself right back in it. On 29 March, I made the decision to go to St James’s University Hospital Leeds, where I was being treated, and I asked one of the nurses to shave it off. Since then, wigs have become a huge part of my life. They’ve helped me to feel better and have had a really positive impact on my mental health. I got into them after the Little Princess Trust provided me with a free one, made from real hair. I realised they can look so authentic. Hair loss was THE biggest struggle for me but wigs made me feel feminine again, which was so important. From there I started experimenting with different lengths and colours and when I found a pink one, I just got carried away! Now it’s an addiction but one that is finding positive out of a tough situation. 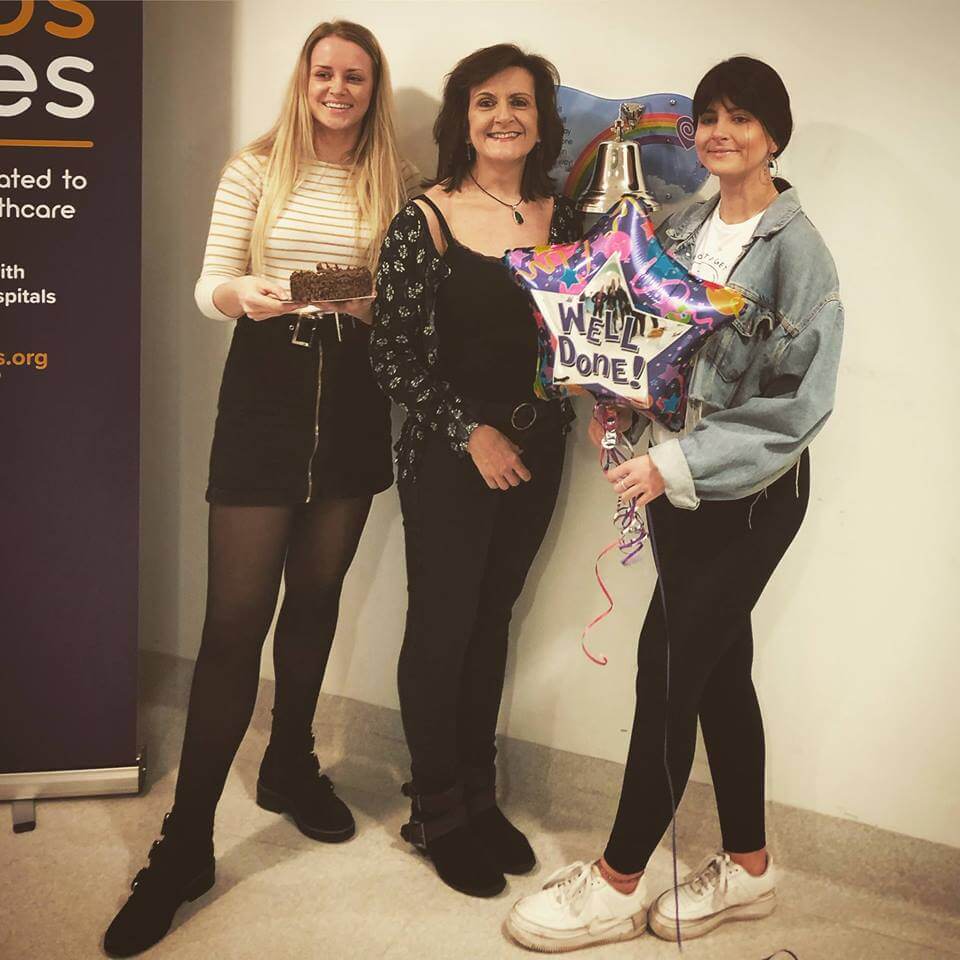 I spent a lot of time on the Young Adult Ward at St James’s. It was really emotional and shocking to see other young people and teenagers going through such tough times. I finished radiotherapy on 17 April 2019 and have been feeling really well ever since. So much so, that when my post-treatment MRI scan flagged early signs of regrowth three months later, I just couldn’t believe it. This time around I feel much more positive. In the time since my brain tumour diagnosis, I resumed my studies and began a three-year course in music production closer to home at Leeds College of Music. In spite of five hours of brain surgery, three weeks recovery, six weeks of radiotherapy, losing my hair, 19 MRI scans, 20 blood draws, 20 IVF injections to freeze my eggs and, most recently, a relapse, I passed my first year of uni with a 2:1! I feel so proud of myself. 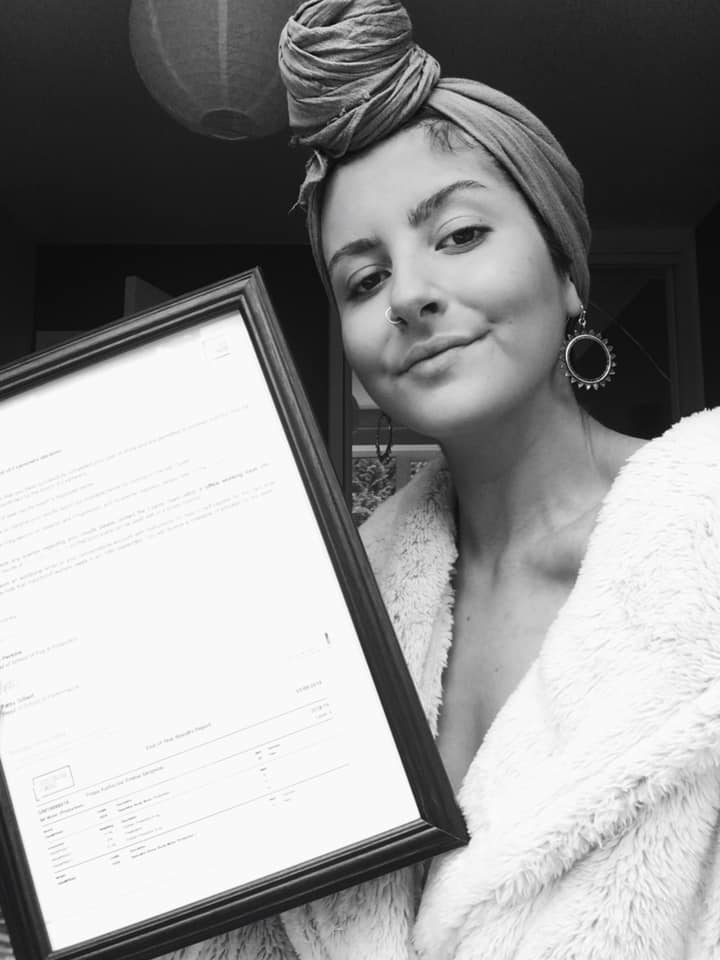 “My life will never be the same but there have been positives to take from it. I’ll never take life for granted; I’ve grown up a considerable amount. I’ll never complain about having a ‘bad hair day’again!”

You realise who your real friends are when you need them the most. Some people stepped up and some didn’t. One of the people who definitely stepped up was my sister, Lara. Lara is a professional violinist and last year was granted an amazing opportunity to record a new arrangement of David Bowie’s “Let’s Dance” with disco icon Nile Rodgers. On the eve of my surgery she arranged for Nile to call me, to wish me good luck. He was so lovely; he said he’d heard I was having a hard time and joked that his brain was “the one organ he’d not had operated on”! Nile has had cancer three times and was really empathetic. 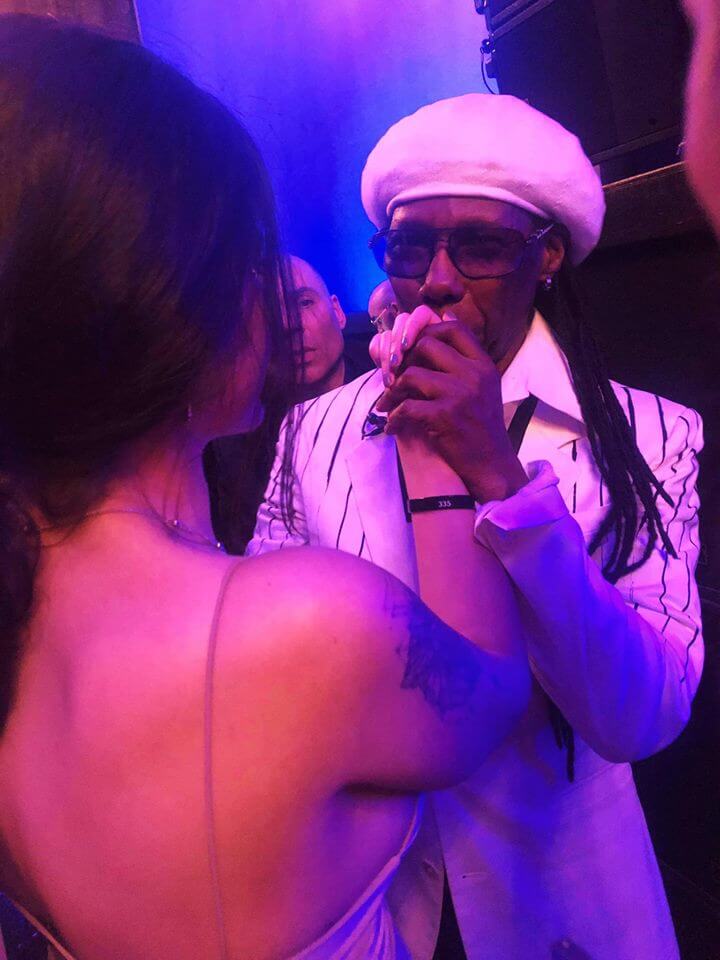 As if the phone call wasn’t enough, two-and-a-half weeks after my operation, Nile invited me to his Brit Awards party at The Ned in London. My mum initially replied to his invitation saying she didn’t think I was going to be able to make it, as I had an MRI booked for the next day. We then decided that it was an unmissable opportunity and so my dad hired a Jaguar for the occasion and drove us down to London. It was an amazing night; as well as meeting the legendary music producer himself, I met “I’m a Celebrity’s” Fleur East and the singer-songwriter, Freya Ridings. Nile and I have stayed in touch and just a few weeks ago we chatted on FaceTime for 45 minutes. He’s been so supportive and has inspired me to pursue my own dream of becoming a professional music producer. My track Focus came out last Friday, I’ve been gigging with Leeds-based band Victors and recently performed at Cardiff Pride.

“When I think about the future I sometimes get upset. This disease has taken away my freedom and forced me to change my lifestyle.” 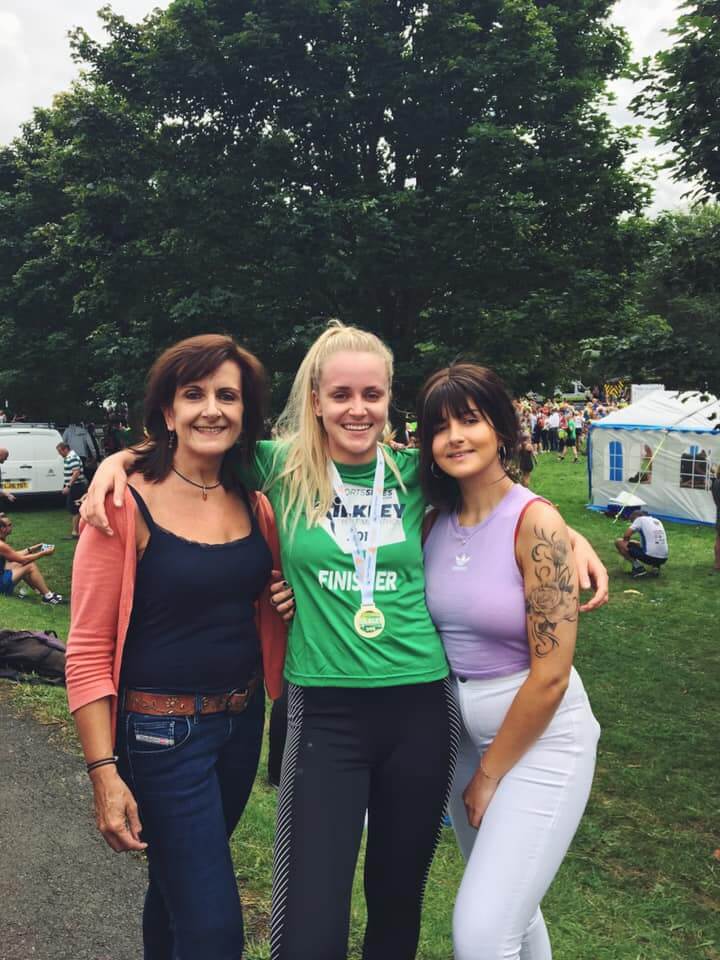 A guy in my year got diagnosed with an acoustic neuroma. Brain tumours are so much more common than I realised. I was shocked to learn that only 1% of the national spend on cancer research has been allocated to the disease, in spite of it being the biggest cancer killer in children and young adults. In July, my wonderful sister Anna enlisted the support of three uni friends and they ran the Ilkley Half Marathon for Brain Tumour Research. I’m so proud that they raised more than £2,400, which will help fund research into finding a brain tumour cure. It is the only national charity in the UK dedicated to raising funds for continuous and sustainable scientific research into brain tumours. I know only too well how vital this work is.

If you have been inspired by Pippa’s story and would like to know more about our lobbying, research updates and fundraising opportunities, please sign up to our weekly e-news. 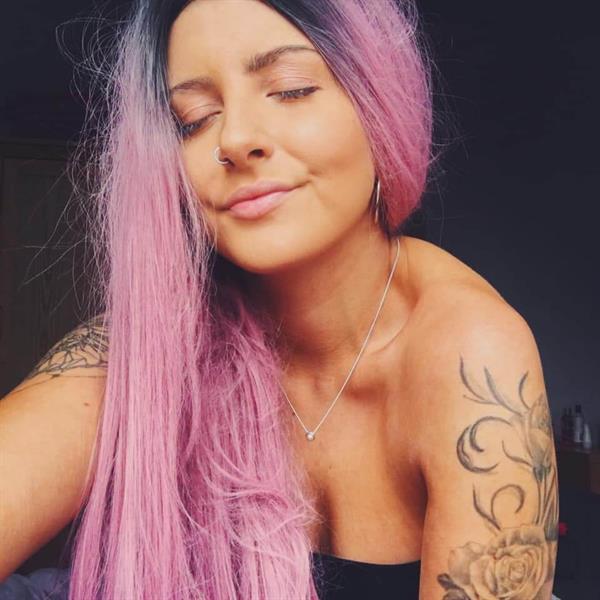