Philip Scard, of Twickenham in Southwest London, has a PhD in physics and was working as a scientist in the oil and gas industry when he suffered a seizure at home in 2015 and was subsequently diagnosed with a grade 2 oligodendroglioma. The 39-year-old, who is originally from Hampshire, underwent surgery in 2017, after which he suffered speech aphasia which took several months to recover from. He went on to have radiotherapy and chemotherapy, but suffered an allergic reaction to one of the drugs and eventually had to abandon treatment after being hospitalised with sepsis. His tumour is currently stable and being monitored with six-monthly scans.

I had just returned home from the Isle of Man Easter Festival of Running, a weekend that includes three long-distance races and a 10-mile running pub crawl. The Monday hangover seemed to be turning into Tuesday flu so I drove home from work early. After a short rest I tried to stand up to go and cook dinner, but the arm I reached behind me to lift my chair ‘vanished’. Then my leg went numb and I fell. The loss of sensation continued along my body to my abdomen and I felt my breathing seemingly stop.

“‘This is it’, I thought, totally alone in my flat; I still remember the piece of serene music that was playing as I blacked out.”

I woke up an hour later, having experienced what I now know was a grand mal epileptic seizure. My brother lives only a mile away and accompanied me to Teddington Memorial Hospital, where a nurse curtly concluded that I had fainted. By this time I was more sleepy than worried and went home to bed. I left a hastily arranged GP appointment the next day with a letter from the doctor which ended ‘suspected lesion???’. Glad I didn’t know what that meant, I took it straight to West Middlesex Hospital A&E as instructed and presented it at the reception desk. Less than an hour later I was looking at an egg-sized smudge on a CT scan of my brain. The registrar said: ‘I think you have a brain tumour’.

The following week I saw a consultant neurosurgeon at Charing Cross Hospital in Hammersmith. He was upfront: although it was currently a low-grade tumour it would inevitably progress to a higher grade and be fatal. The tumour couldn’t be removed without leaving me severely disabled, there were few treatment options and no cure. My only hope was that researchers made a breakthrough in the meantime – a decade, maybe more, maybe less. We would just ‘watch and wait’ with periodic MRI scans. I had been made redundant the week before the running festival and my landlord was thinking of selling up.

“With the prospect of no job, no home and not long to live I spent the summer in an emotional fog.”

A new job came along and my home was secured but my seizures became increasingly frequent, despite high doses of three different anti-epilepsy medications. I fell downstairs, bruised my head and fractured ribs. The tumour was also growing fractionally larger in each scan. As a scientist myself I know that research success is far from inevitable and discovered that brain tumour treatments needed more than success, they need a breakthrough. I decided to do what I could to help myself and resolved to prove to myself that the diagnosis wouldn’t change who I was, by returning to where my brain tumour journey began. I sometimes joke that the Easter Festival saved my life – it led to an earlier diagnosis than might otherwise have happened and motivated me to overcome the feeling that the diagnosis itself had somehow diminished me and imposed new (but imagined) boundaries. In the past I had never asked for sponsorship for races; I found them fun and would have run them regardless but this time I was genuinely worried that running would trigger seizures.

“I made raising money for research my motivation to overcome that fear; that’s how I discovered Brain Tumour Research.”

In fact, I ran the 10km and 5km races faster than the previous year, ‘hopped’ up and down the hill race in a giant pink rabbit costume, as an excuse to take it easy, and raised more than £6,000 in sponsorship. I even did the pub crawl; at this time alcohol-free beer was coming of age so nobody noticed that I wasn’t ‘drinking’ (until I carried them all home). I’ve since made it a hobby to seek out new alcohol-free beers – more than 200 so far! 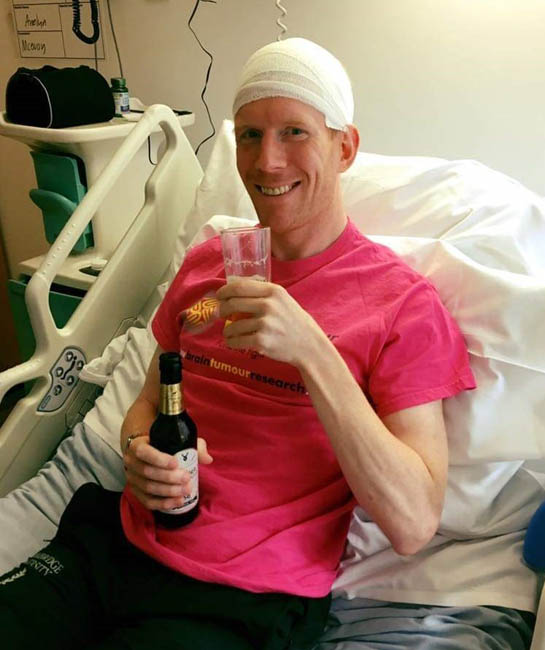 The following weekend I was on the Embankment watching the London Marathon. I had never had an ambition to race over really long distances but the location of my tumour means that I will progressively lose strength and mobility over the whole right-hand side of my body. I realised the opportunity to run a marathon could be ‘now or never’ – not having had the ambition wasn’t a guarantee that I wouldn’t later have regrets. I applied for a ballot place and got it first time. “Training didn’t go well; I had lots of seizures and injuries but I arrived on the start line mostly intact.”

A friend chaperoned me round for safety and we finished in three hours and 16 minutes – one minute outside my target – and raised another £9,000 for Brain Tumour Research. Throughout my journey family and friends have also been doing sponsored races and other activities, and following the recent Mr Motivator challenge we have raised a total of nearly £25,000, enough to fund nine days of research at a Brain Tumour Research Centre of Excellence. In the meantime I had been exploring treatment options. I obtained a second opinion from Addenbrooke’s Hospital in Cambridge and also changed my consultant to a neuro-oncologist at the National Hospital for Neurology and Neurosurgery (NHNN) in Queen Square, London. We decided to take a biopsy via an awake craniotomy, which I was told carried a high risk of not being mobile for several weeks after the procedure and a lower risk of being unable to talk for some time. They successfully removed about 25% of the tumour and the biopsy results showed that it was a grade 2 oligodendroglioma with the ‘IDH1’ mutation. I was jogging along the ward corridor and up stairs 48 hours after surgery but couldn’t speak properly for several months. I could talk only in ‘toddler speak’ – fragmented, disjointed sentences with no grammar, that took me so long to form I forgot half way through how I had begun. After two or three months people said they didn’t notice any problem, which made me question my pre-surgery conversational skills!

“Five years on I still find speaking and conversation exhausting.” I started radiotherapy a few weeks later. The early days of the week-long cycles felt ok and I was going out and running but by the weekend the fatigue was crushing and there was no option but to slump on the sofa with a film. I lost hair over the areas that were irradiated and it’s never fully recovered. I’m not quite ready to pretend I’ve simply succumbed to male hair loss, so for now I have a slightly funky arrangement with a full head of hair on one side and a wispy quiff and comb-over framing my surgery scars on the other.

The six-week cycles of the chemotherapy gave me plenty of time to rest and recover. I continued racing at first but the treatment was causing quite rapid weight loss. After the third cycle I developed an allergic reaction to one of the drugs and came out in painful skin rashes.

“During the fourth round I was hospitalised with sepsis and pumped full of strong antibiotics for three days; after that the chemotherapy was stopped.” Shortly before my diagnosis I had started internet dating. The odds of finding ‘the one’ are slim but it was fun and I was meeting plenty of people. However, a life-limiting brain tumour is not a detail that can be hidden for long and I found that as soon as it was revealed the connection stopped, whether during messaging or after a couple of dates. Things did sometimes progress further but anxiety soon overtook romance and after two years I gave up.

I wanted to give it one more try near the end of my treatment. I warned Gosia before we met that although my photos really were recent I would look a bit different, particularly in the hair department, and told her the reason why. She saw behind the diagnosis and the seizures and, even when I told her on our fifth date that I’d been messaging from hospital with sepsis earlier in the week, she was unfazed enough to give us time to properly get to know each other. That spring she came to the running festival with me (and was also remarkably unfazed by that – that’s when I knew she was the one) and we were married last September. We’re now hoping to start a family. 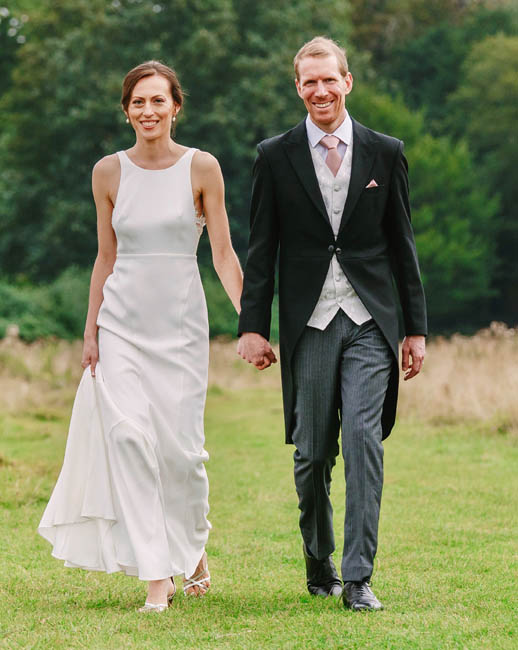 “Having a brain tumour has impacted all aspects of my life.”

My seizures are triggered by stress and too much speaking or writing, and I haven’t been able to work since the surgery. Like many other patients I can no longer drive. I am fortunate to live in London where public transport is good but even making a short journey brings on fatigue, and I have to travel to lots of medical appointments. I’ve had speech therapy, vocational rehab therapy, psychotherapy, muscular physio and neuro-physio, and countless GP appointments about medication and referrals, all on top of my cancer treatment, consultant appointments and scans.

“Early on I realised that conversation with friends and acquaintances was becoming dominated by the topic of my brain tumour.”

People were curious and caring, and I wanted to open up about it, but I missed conversations about frivolous and fun things which pass between friends over a pint of beer. I started writing a blog, to keep people who were interested up-to-date without needing to enquire. I’ve found the writing very cathartic. Sometimes it takes a few days to find the words that express precisely how I’m feeling, but having finished the post I understand far better what’s going on inside me. To read it, visit www.facebook.com/BearOfTooMuchBrain (with thanks to Winnie the Pooh for the title).

“Being part of the wider brain tumour community, particularly through Brain Tumour Research, has been a great comfort.”

The fellowship and friendship, and opportunities for mutual support and sharing have really lifted me up. Seeing how our fundraising is being spent at the Centre of Excellence at Queen Mary University of London and listening to our advocates at the All-Party Parliamentary Group on Brain Tumours (APPGBT) does give me hope, despite the significant hurdles that remain. I’ve been involved practically as well, joining a pathway board for the North Central London Cancer Alliance as a patient representative. Seven years on from my diagnosis, and nearly four from the conclusion of my chemotherapy, I am being monitored with six-monthly MRI scans and am happy to say that my tumour remains stable. Recently my employer participated in a clinical trial with a pharmaceutical company for a drug that targets the specific IDH1 mutation in my type of tumour. Initial results are positive but not indicative of the breakthrough which I and other patients need, and even if successful the drug must go through many more stages of testing.

“I live in hope of a cure before it’s too late.” 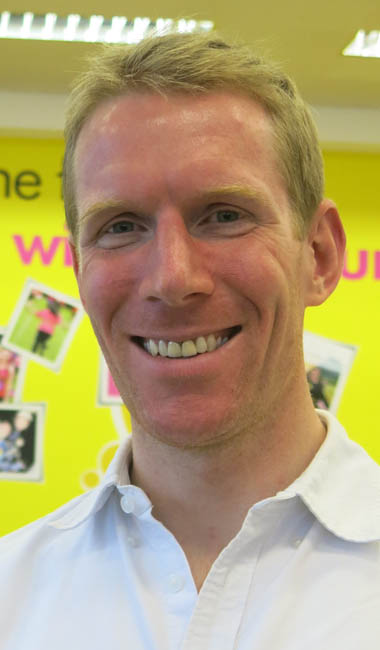