Just two months before the birth of his daughter, Oli Pendrey, 33, was diagnosed with a brain tumour. He had an operation to remove his tumour, which was eventually diagnosed as a grade 3 anaplastic astrocytoma and, three weeks after surgery, baby Harriet was born. Now Oli, his wife Beki, and their two boys Charlie and Sam, six and four, are looking forward to making memories with the new addition to the family.

Last New Year’s Eve was one like no other. Having expected to spend the night celebrating with Beki and our two boys, I instead found myself in a hospital bed, listening to the fireworks outside and subdued celebrations from nearby wards.

I guess there is never an ideal time to be diagnosed with a brain tumour. But to be given the news just two months before our third child’s due date was extremely inconvenient to say the least. 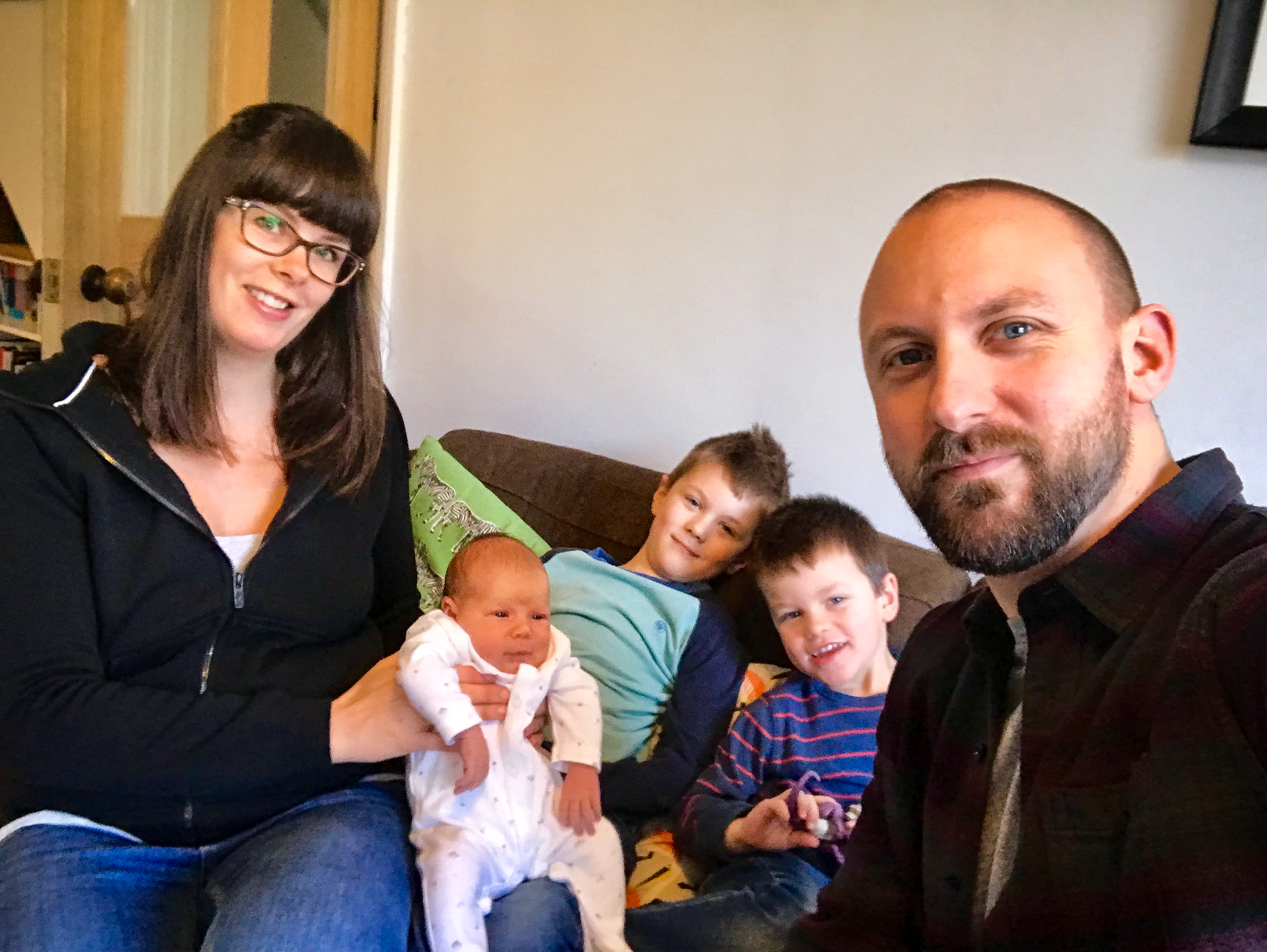 My diagnosis came completely out of the blue, especially as, bar some minor football injuries, I’d rarely been taken to hospital before. I’d also not been suffering from the stereotypical symptoms you’d associate with a brain tumour, such as headaches, but had experienced a strange, out-of-body sensation that felt as if I was observing myself, throughout October 2018. I was quite blasé about the whole thing and didn’t think too much of it, until I had my first big seizure a few weeks later.

“I remember driving my teammate Matt to one of our football matches and then waking up in an ambulance, panicking to see a paramedic. But I don’t remember anything in between.”

According to Matt, I turned my head to one side and started violently shaking. I’d somehow managed to slow the car down and stop, albeit in the central reservation, infuriating other drivers. There was blood coming out of my mouth from where I’d bitten my tongue. The seizure lasted about three minutes and afterwards I ran from the car, in a state. I was lucky to come out of the ordeal with only a few cuts and bruises and to not have been hit by any oncoming traffic.
I was taken to the Royal United Hospital in Bath where a CT scan revealed ‘something suspicious’ in my brain. I needed further tests. I was grateful to have my mum and Beki by my side. I was still in shock and wasn’t able to take anything in properly. It was surreal.

I spent the night in a ward and had an MRI the following morning. It was then I first heard the words ‘brain tumour’.

“We were somewhat relieved to be told that it was probably low-grade, as our only other experience with the disease was when Beki’s cousin lost her husband to a very aggressive type of tumour a few years before. Needless to say, when I saw the white mass occupying a large space in the right-hand side of my brain, it was a terrible shock.”

Beki, Mum and I attended an appointment at Southmead Hospital in Bristol a few days later to meet Mr Iyer, a neurosurgeon, and his team. Mr Iyer confirmed that the tumour was slow-growing but said that it would probably turn aggressive in future. Beki, who is a midwife, asked difficult questions, such as, ‘is it cancer?’ and ‘will it be life-limiting?’. The answers to both were yes. Mum and Beki were in tears but I held it together. It hit me more in the coming days as I dwelt on the news and realised the tumour might kill me.

With our baby almost due, I wanted to have the tumour removed as soon as possible, so was pleased to be booked in on New Year’s Eve. I wasn’t too nervous and tried to be matter-of-fact about the operation and, as I came round from the general anaesthetic, Mr Iyer told me that the procedure went well.

“Things took a turn for the worse a few days later, however, and a haematoma in my brain caused me severe headaches. I was given a concoction of morphine, codeine, and anti-sickness drugs. It was a big step back to suffer from further seizures but fortunately my symptoms soon improved.”

Since being discharged, I’ve been feeling very tired, but my wound is healing well. In less than a month, my focus shifted from recovering from my surgery to preparing for the baby. Harriet arrived on Monday 21 January and both she and mum are doing well. Thankfully, Beki and I are well-rehearsed in welcoming a newborn into the home, and we feel very lucky to have been gifted with such a beautiful little girl. 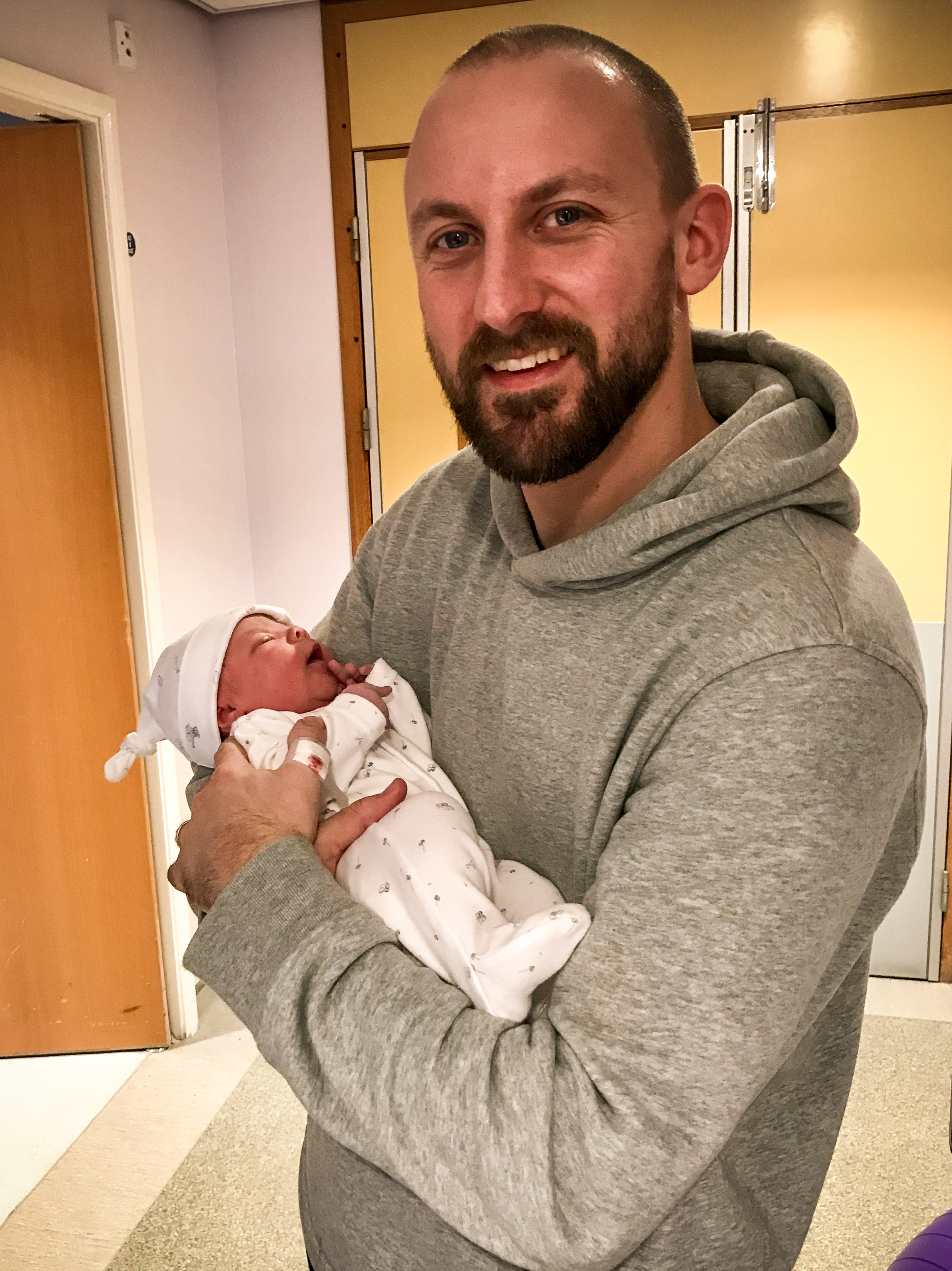 I went for a follow-up appointment a few days after Harriet was born and was told that my tumour is a grade 3 anaplastic astrocytoma. This was absolutely gutting as the doctors initially thought it was a grade 2 tumour and now I will have to undergo radiotherapy and chemotherapy. I’m trying to get on with life but the thought of my tumour is always there.

I’ve realised that my time on Earth may be limited and this is why I’m focused on creating wonderful memories for my children to remember forever. Beki and I have already booked our summer holidays, to Cornwall and France. We both went as children and want nothing more than to replicate those fantastic holidays for our own family. 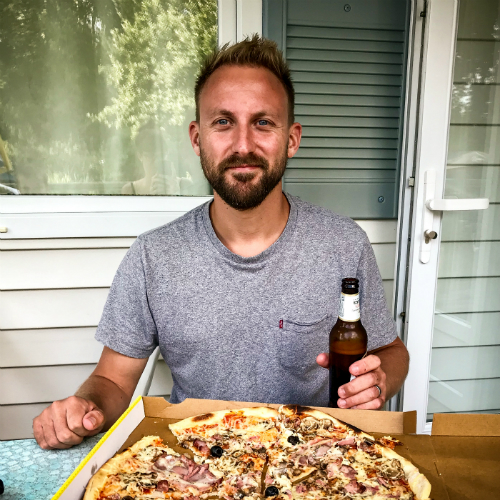