Five-year-old Matthew Hedges was diagnosed with a craniopharyngioma in February 2021 after suffering with headaches and sickness. The youngster, from Surbiton in South West London, underwent surgery to treat hydrocephalus and then had proton beam therapy after being advised against further surgery because of the associated risks. He is now out of active treatment and being monitored with regular scans as he looks forward to returning to school.

Here is Matthew’s story, as told by his mum Louise…

Matthew likes everything; Lego, cars, dressing up and running around like a loon. He’s a funny, imaginative, friendly, kind, easy-going boy and watching him go through everything he has in the last 18 months has been really difficult.

“His symptoms began in February 2021 when he started getting headaches and being sick all of a sudden.”

He was sent home from nursery and was fine for a couple of days but then got sick again. That happened a few times but when the interval between him feeling fine and getting sick got shorter and shorter, I phoned the doctor and was given a referral. They also advised that we took him to A&E if he got any worse. 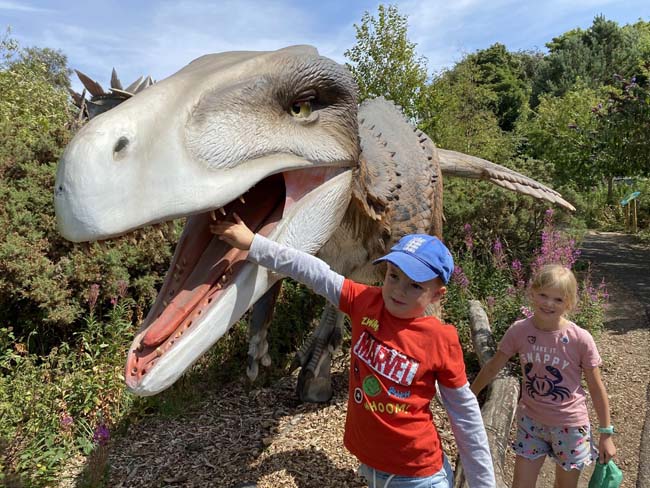 When we did eventually go to the A&E department of Kingston Hospital in Kingston Upon Thames, we were told what he had was post-viral and nothing to be concerned about. Matthew was given some neuro checks but we were told there was no need for any scans and, to be honest, by the time he was seen, he was fine and I returned home feeling slightly neurotic.

“His referral was brought closer but that still meant waiting two months.” 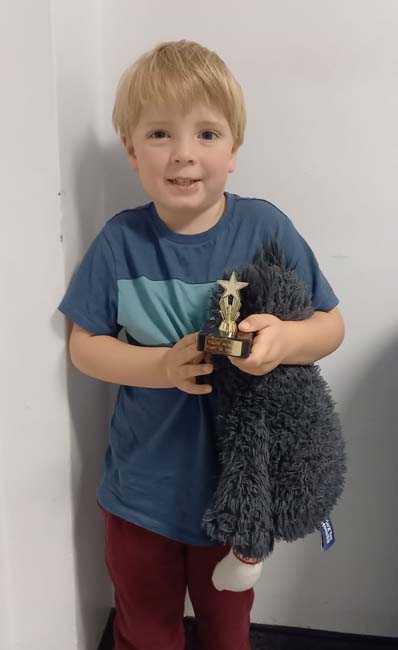 A week later, when he started waking up sick in the middle of the night, we took him back to A&E where they asked if he’d had any visual disturbances. We said no but Matthew disagreed so they decided to do an MRI scan and some testing on his eyes, which is when they discovered his tumour. This was during COVID when you were only allowed one parent in the hospital at a time and it was a work day, so my husband, Andrew, left after a few hours and I took his place.

“This meant that I was forced to tell him about the mass on our son’s brain over the phone.” 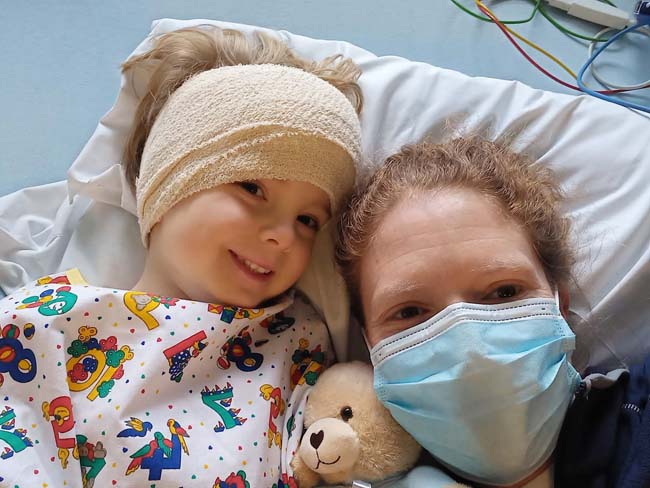 Matthew and I were swept off in an ambulance to St George’s Hospital in Tooting, where Andrew drove to meet us. Matthew was given oral steroids and was well enough to climb into the ambulance and turn on the sirens himself, which was surreal! We were told he had a mass on his brain, which was blocking his cerebrospinal fluid (CSF) and causing a build-up of pressure in the brain known as hydrocephalus, but they thought it was unlikely to be cancerous. 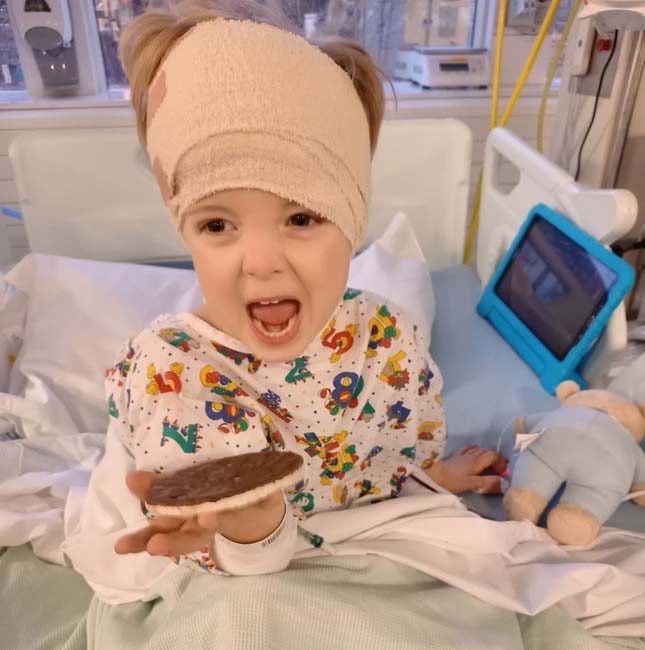 “One of the most distressing things was watching Matthew get cannulated.”

They tried to do it in both of his hands at Kingston but were unable to and said it could wait until he got to St George’s. When he was there they tried four more times, and finally resorted to using an ultrasound machine while we pinned him down, before they were successful. The difficulty they had was probably a result of him being dehydrated after weeks of being sick. There was a lot of screaming and it’s partly responsible for the needle fear Matthew’s developed, although he’s had play therapy to address that, which has helped. 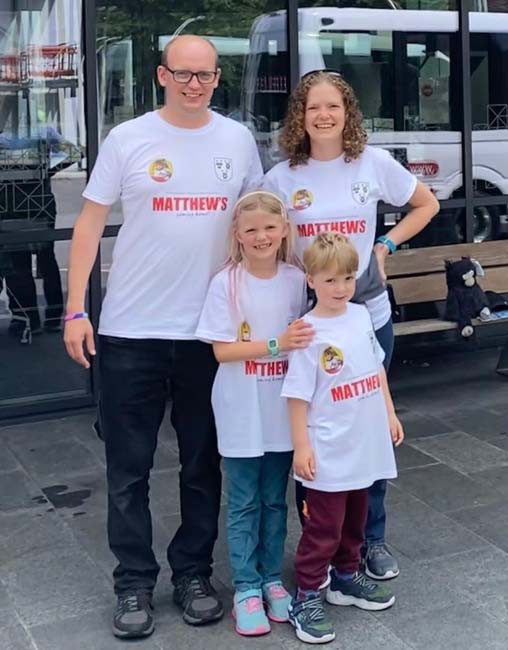 They gave him a CT scan at 9pm and scheduled him for an operation at 9am the following day where, as well as relieving the pressure on his brain, they fitted a Rickham reservoir and took a biopsy to determine what type of tumour he had. He spent a few days on the paediatric intensive care ward, which is when we were told they were pretty sure he had a craniopharyngioma, and, thankfully, he bounced back fairly quickly.

“By day two he could be found playing hopscotch in the hospital play room.” 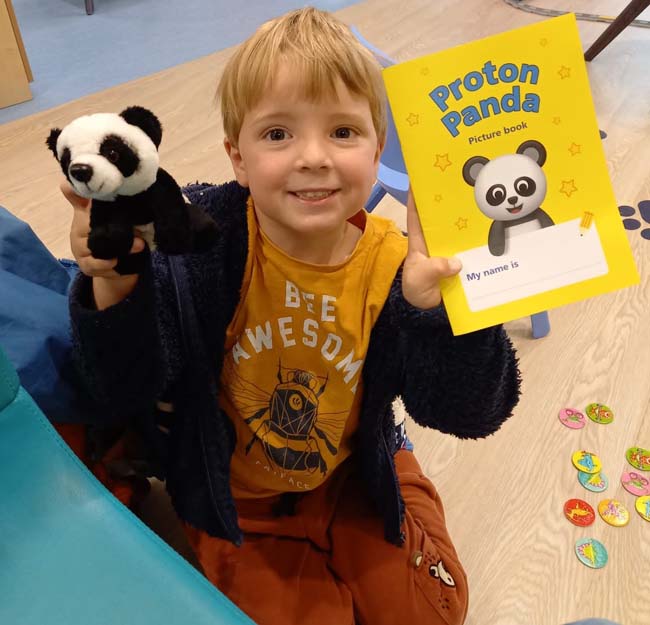 After that we got referred to the Royal Marsden (RM) Hospital in Sutton where we were advised against further surgery because it would be fairly high-risk. Instead, we were recommended to proceed with proton beam therapy, an advanced form of targeted radiotherapy. Our referral for that was accepted rather quickly but a disagreement between the teams at RM and The Christie in Manchester, where it would take place, caused delays. It was a bit unnerving to hear that the professionals couldn’t agree on the best course of action but, eventually, after another round of conversations with the neurosurgeons, our original recommendation against further surgery was agreed upon. 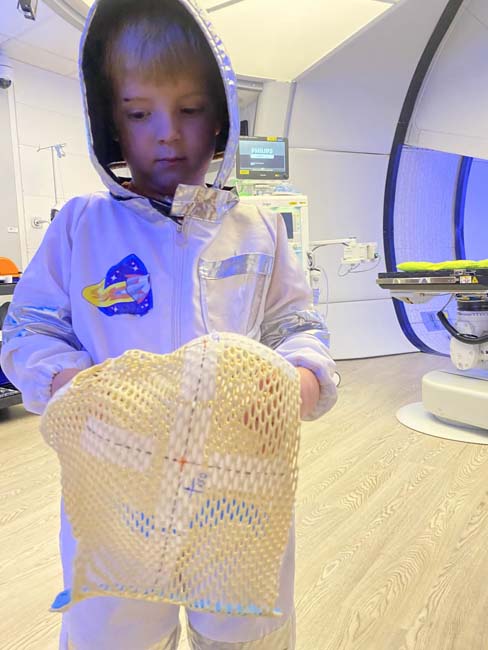 We went up to Manchester during the May half-term last year after Matthew had a port fitted at St George’s in preparation for six weeks of proton beam therapy. In fact, that procedure was delayed 24 hours after Matthew had fasted all day, which the staff were very apologetic about but wasn’t ideal. After arriving, the NHS put us up in a StayCity hotel with a shuttle bus between there and The Christie, and other families doing the same thing.

“On the first day of Matthew’s proton beam therapy, he had a seizure under anaesthetic, which was terrifying.” 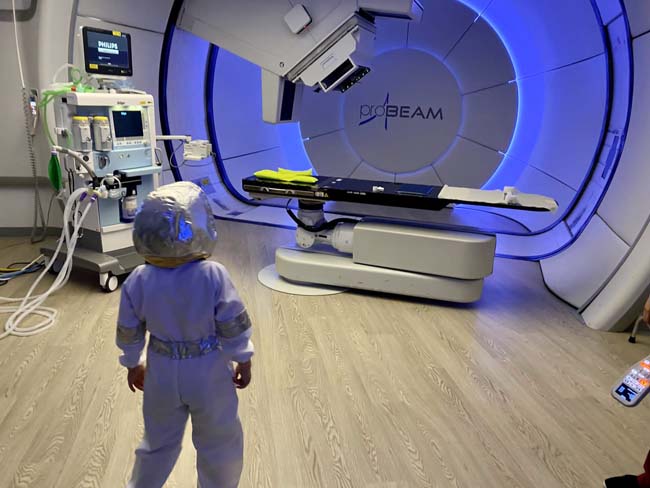 After that, things went OK although he did get tired towards the end. Whilst we were there, we gave his sister, Eleanor, a choice of what to do and she wanted to continue going to school so we came up with a complicated arrangement with grandparents and aunts and uncles that allowed her to do that. She came up to visit on weekends and spent her half-term with us but it was hard on her because her birthday fell in the middle of that period. We were glad she was able to be there to see Matthew ring the bell at the end of his treatment because everything else had happened behind closed doors due to COVID. In fact, Matthew rang all the bells; the one upstairs, another downstairs and the one in the car park – it was lovely to see! 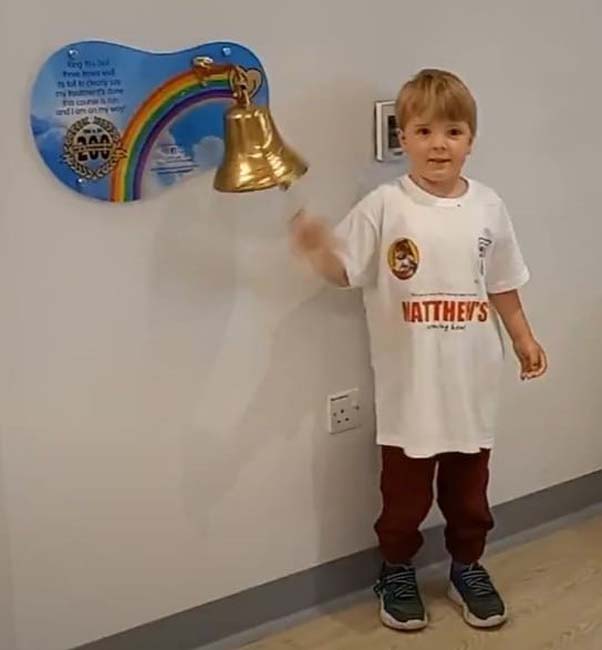 “He's now out of active treatment and having quarterly scans.”

Assuming everything stays stable, after two years he’ll move to having scans every six months. Sadly, the radiation he had has affected his pituitary gland and his hormones, which we were warned about and would likely have happened anyway because of the location of his tumour on his pituitary gland. He has to take growth hormones as well as thyroxine, which is used to treat thyroid deficiencies, and we’ve just been told he has a cortisol deficiency, for which he will have to take steroids for the rest of his life. He suffered with tiredness related to somnolence from about six weeks after treatment but his energy levels have gradually increased over the last year as the hormones have also kicked in, so much so that he was able to take part in a physical challenge recently. 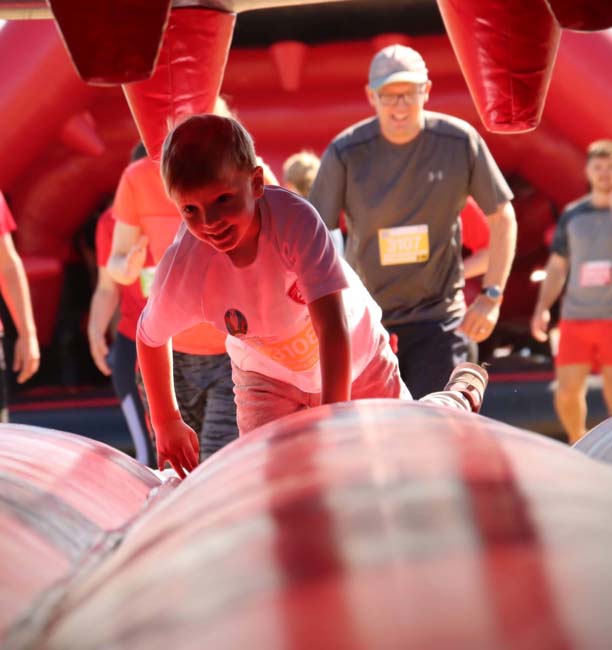 Matthew always liked taking part in Junior ParkRun near where we live in Surbiton, South West London, and the last one he ran was between having brain surgery and starting proton beam therapy. He’s not managed to run it since, although he can walk it – and do a short sprint finish. On New Year’s Day, we were trying to think of fun things our family could do throughout the year and Eleanor and I decided we wanted to do an inflatable run. When I booked it, I decided to book it for all four of us and signed me and her up for the 5km route and Matthew and his dad for the shorter 2.5km one in the hope that when the day came around, Matthew would be able to do it. 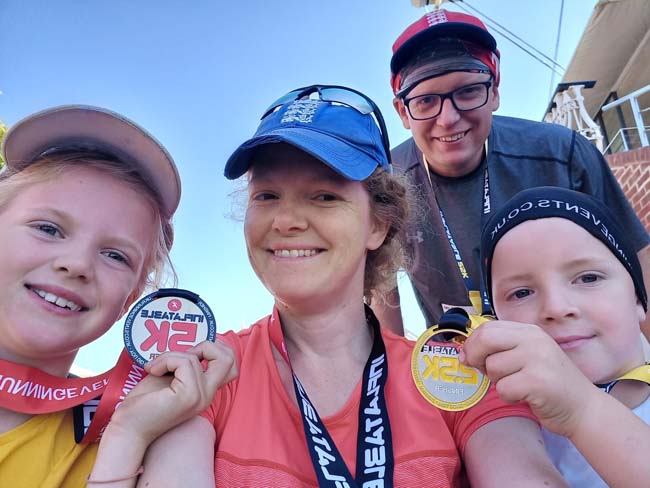 It took place in July and was an extremely big deal because Matthew was able to take part, which would have been unthinkable even a few months earlier. It was hard but a lot of fun. Matthew was adamant he was going to do the longer route with me and Eleanor but, when he got half way around, he said he could only do one of the two laps. He went bright red and white at the same time because he really was pushing himself but he really enjoyed it and it was great to see how he coped with it. He even had enough energy to cheer us on after he’d finished. He was so proud of himself, as were we; it was just phenomenal. We also raised £2,770 for Brain Tumour Research, which was amazing. Never in my wildest dreams would I have imagined we’d raise anything like that. We’re so grateful to everyone who got behind us. 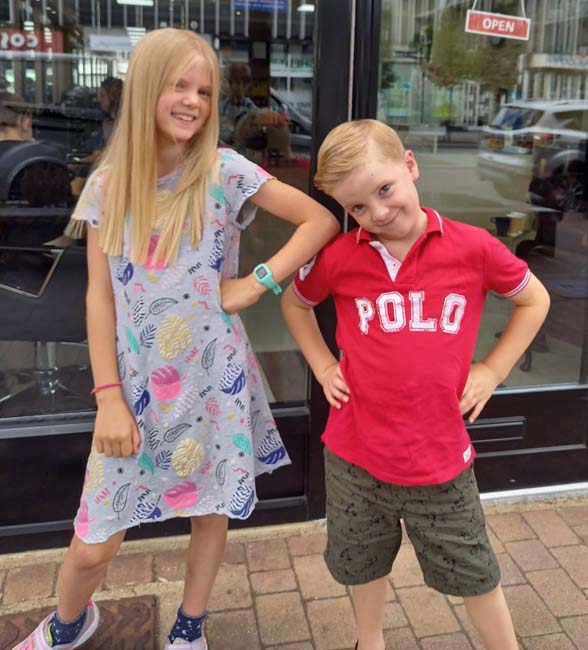 We feel so lucky that Matthew’s been able to get back to the point where he’s able to take part in events like that, not compared to the majority of people but compared to many of the friends we’ve made on this journey. Even compared to others I know who have craniopharyngioma, he’s extremely well and we feel so fortunate for that.

“We just hope that it lasts.” 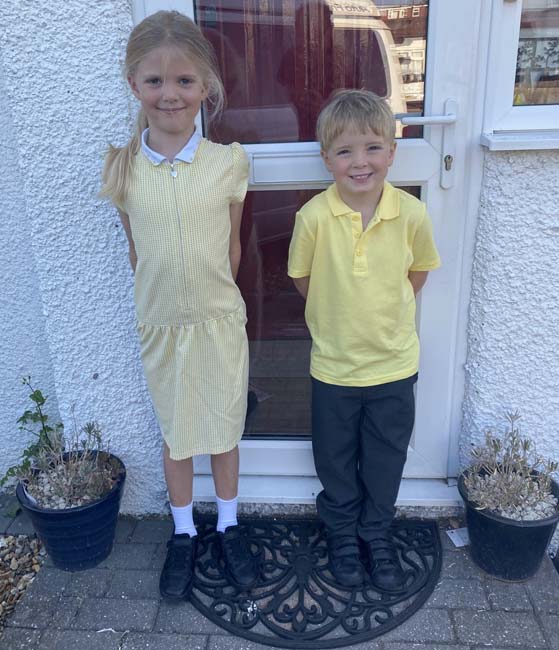 He’s also doing alright in school having started in reception last year, although he did miss a fair bit. The radiation he’s had can affect his processing speed and short-term memory but we’ve not really seen any evidence of that so far so we’re counting our blessings. He did develop a bit of anxiety about school because he struggled to get through an entire day without falling asleep, but he’s got better over the last year, in part because play therapy has helped him work through his emotions. He loves it at the moment and is excited about going into Year 1 next month. He did a trial day before breaking up before the summer, which involved baking and painting so his new teacher has completely won him over. My only worry is that he’ll be disappointed school’s not like that every day! 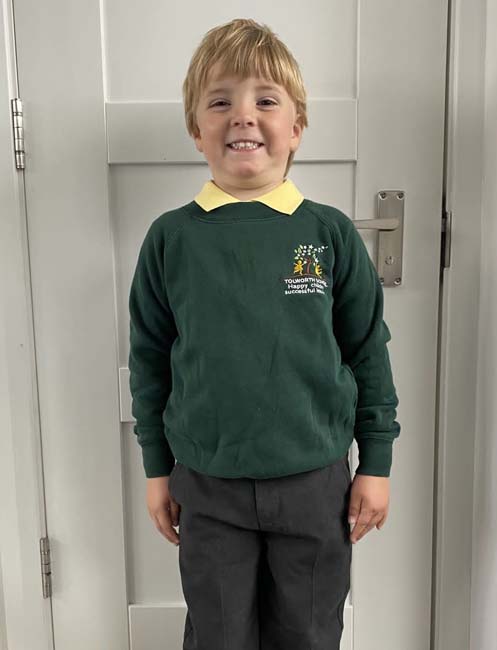 Matthew made a friend during his treatment in Manchester who died earlier this year at the age of four. I’d share our son’s story a million times if it meant that we could help just one other family going through this and raise more money for better treatments. I want parents to have the confidence to know when something is wrong with their child and to keep pushing. If I hadn’t done that with Matthew, there could have been so much more damage done by the time we discovered his tumour; even just a couple more days could have been so much worse. 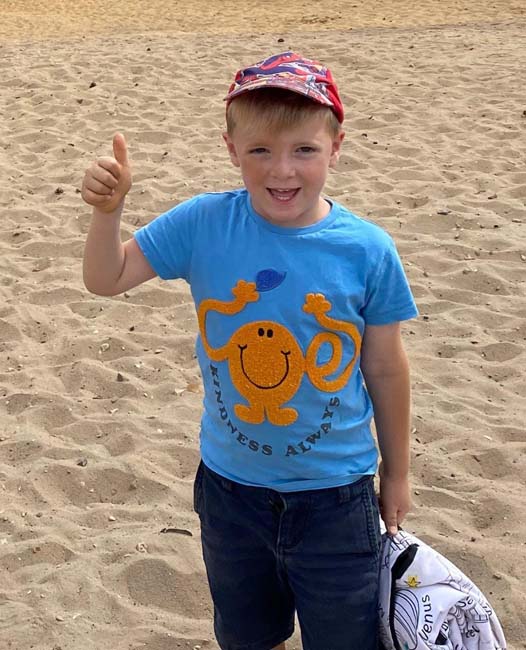