Staffordshire roofer and dad-of-two Matt Harvey, 33, began suffering with headaches, sickness and poor vision in December 2013. A year later, a routine eye test at Specsavers resulted in Matt being sent to hospital for rapid diagnostic tests, which revealed a brain tumour. Having undergone three brain operations, including two awake craniotomies, radiotherapy and chemotherapy since his diagnosis in January 2014, Matt continues to adopt a positive outlook on life, staying strong for his wife Cheryl and children, Riley aged 11 and Brooke, nine.

There’s no denying my brain tumour has had a massive impact on my life. I haven’t been able to drive for the past five years. My wife Cheryl didn’t drive before I received my diagnosis. When they took my licence away, she set herself a goal of passing her test within two months. She booked in for two double driving lessons a week, for six weeks, and at the end of it she passed first time. She’s been amazing. I love my football and coach a local under-12s team, Milford Athletic Dynamos, but treatment has left one of my feet completely numb and I can no longer run up and down the touchline like I used to.

“My kids and wife have been great but it’s been tough on them at times. But I’m still here, I still have options and I’m still fighting and that’s the main thing.” 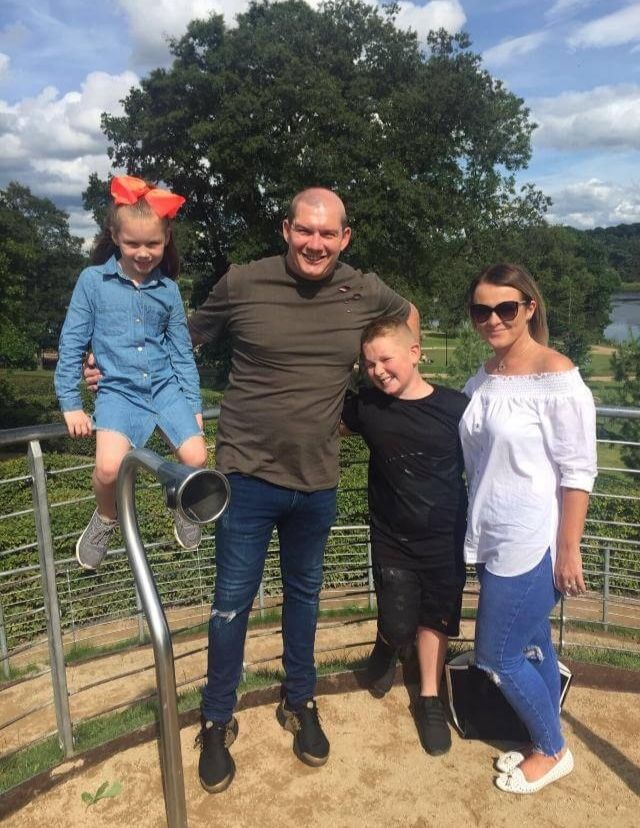 I first had a seizure in January 2014, a year after I began suffering from headaches, nausea and bleeding from my ear. I ended up in hospital after the seizure but was told I’d had a panic attack and was sent home. Cheryl knew it wasn’t a panic attack and as I also noticed my eyesight was deteriorating, she encouraged me to go and get my eyes tested. During that appointment the optician detected a build-up of pressure in the brain, which can be a sign of a brain tumour. I was immediately sent to New Cross Hospital in Wolverhampton, a 30-minute drive from home. Cheryl and the kids came with me and it was upsetting for them, as it quickly became apparent something serious was going on. The first doctor who took a look in my eyes said he was surprised I could still see anything at all.

“Several more eye tests and MRI scans later and I was diagnosed with a grade 2 diffuse anaplastic astrocytic tumour. I was told that they are initially slow-growing but have a tendency to progress to a higher grade over time, usually over a number of years.”

I couldn’t believe it when they said the tumour was the size of an egg!  I was admitted into hospital for two weeks and on 26 February 2014 I went under the knife for the first time, for a craniotomy and debulking of the tumour. The operation took place at University Hospital Birmingham (UHB) and was six hours long. My neurosurgeon, Mr Paluzzi, was able to remove most but not all of the tumour, in the left parietal of my brain. Cheryl and I were in our mid-twenties at the time and the kids were only young.

“It was a difficult time for all of us, especially afterwards when I was put on heavy-duty steroids to reduce and prevent inflammation inside my brain. I put a lot of weight on and my personality changed. Cheryl was really worried about me.” 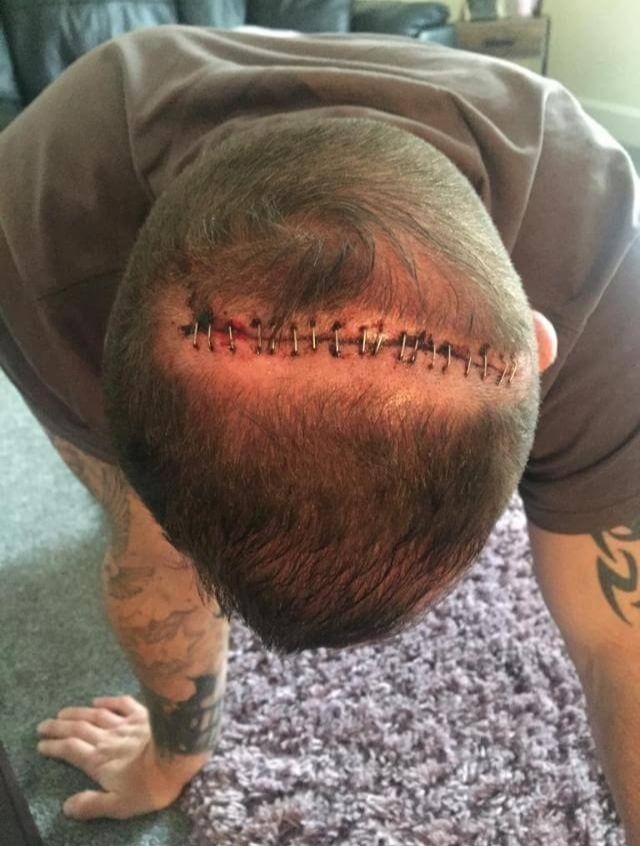 Following the surgery, I was monitored with three-monthly MRI scans, which then reduced to one every six months. By 2017 I was down to annual scans and life had more-or-less returned to normal, when, to my dismay, they found the tumour had grown back and was now a grade 3 glial tumour. I knew this was a possibility but it was still a shock after three years of clear scans. We had a holiday booked to Alcudia in Spain that April, but all plans had to be put on hold as I was back at UHB for my second craniotomy on 26 April 2017.

This time around my neurosurgeon Mr Ughratdar performed an eight-hour-long awake craniotomy. This involved being put under general anaesthetic whilst he gained access to my brain through the skull. I was then woken up and asked to perform simple tasks such as speaking and moving my hands and feet. The idea is that the neurosurgeon can see which parts of the brain are controlling these vital functions and can avoid touching those areas.

“I try to take everything in my stride but going into surgery knowing you’re going to be woken up part way through is terrifying. Happily, it went really well and the next day, other than feeling a bit numb, I was up and about and beginning to recover well.” 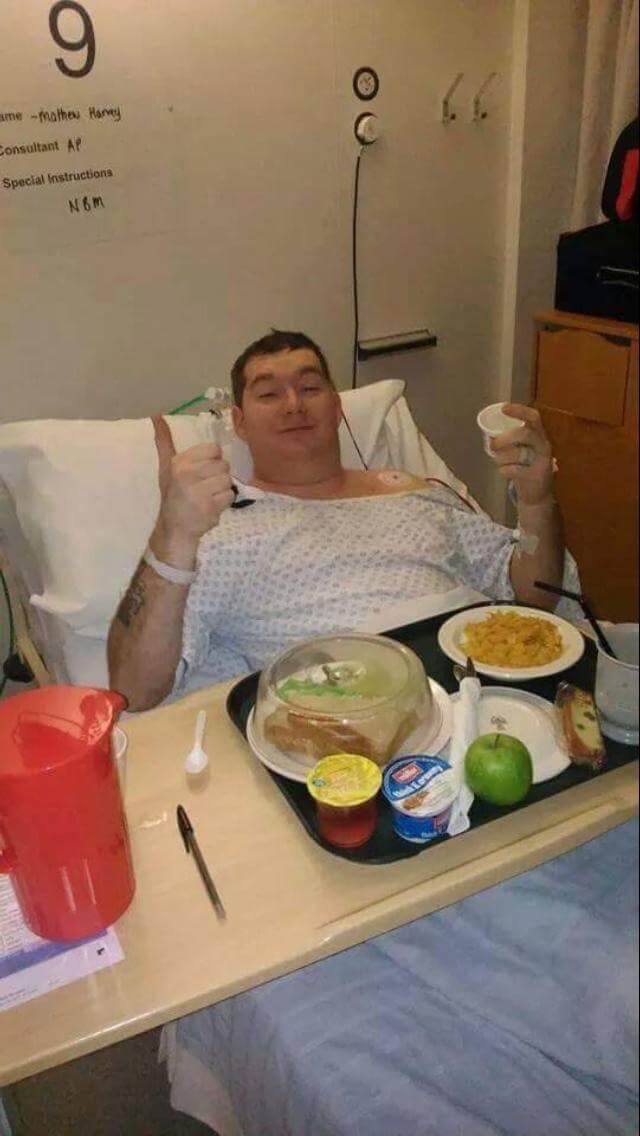 After the surgery, however, there wasn’t much let-up as I faced six weeks of radiotherapy and 12 months of chemotherapy, taken in tablet form. The treatment made me feel sick but otherwise I coped fine. The worst side effect I had was losing my hair – I was gutted about that; I liked my hair! I finished chemotherapy in August last year and the first few scans following treatment showed that things were stable. I was feeling really well and beginning to think I was invincible, when just after Christmas 2018 we were once again delivered more bad news. The tumour had grown back and this time it was grade 4 and would need to be operated on again. Once again, we had a holiday booked for the end of April but this time I was determined not to let the tumour interfere with our family break, so the operation was put off until 10 June 2019. 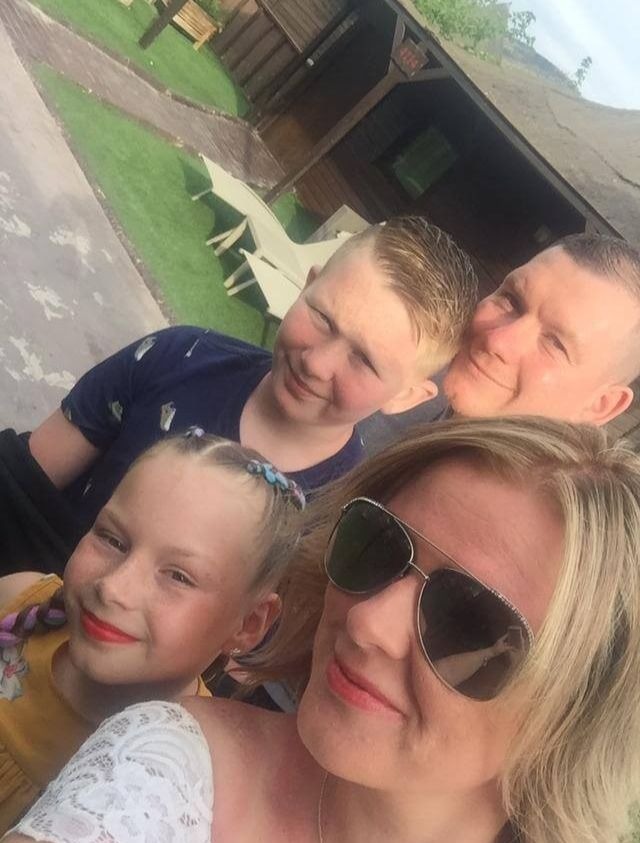 This time my surgery took place at Royal Stoke University Hospital and I felt more apprehensive going in for an awake craniotomy, knowing what to expect. It was also tougher than the last one as I had to lie on my side. The side effects are worse too; I still can’t feel legs properly and suffer from tingling sensations, like pins and needles. On the plus side, my neurosurgeon Ms Albanese, said the surgery went really well; she succeeded in removing the majority of the tumour. Residual tumour was still present, so I embarked on another course of chemotherapy. I also had tissue removed and sent to UHB, where I am part of a clinical trial. 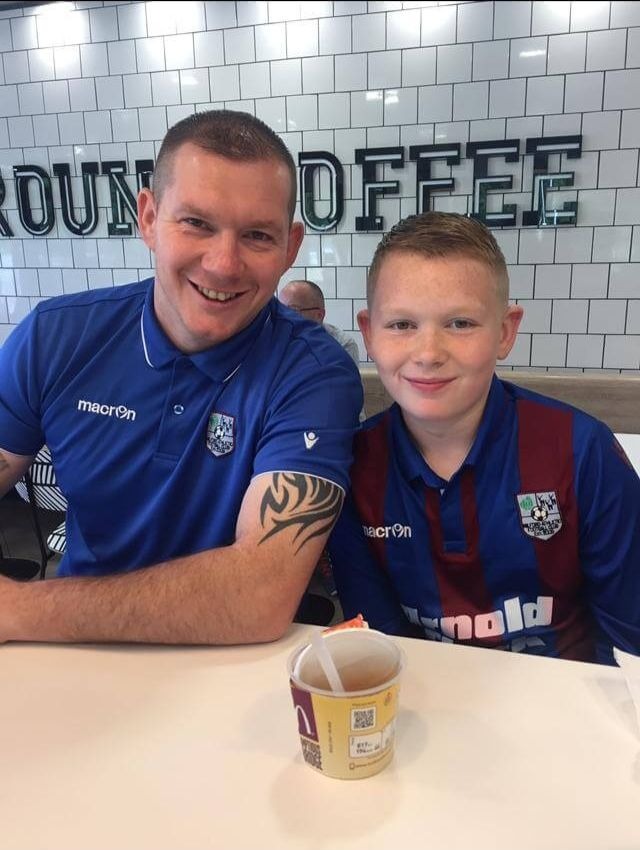 I still go to footy training with Riley, even though I can’t do as much as I used to physically. Brooke has been upset at school sometimes, now she’s at an age where she understands I’m poorly and have to go into hospital for treatment. But on the whole the kids and Cheryl have been great and we enjoy a happy home together. The charity Willow Foundation organised a trip to Center Parcs, enabling us to create some unforgettable memories together. Workwise I had to give up my job as a roofer as soon as I received my brain tumour diagnosis. The work was physically demanding and involved heavy lifting and climbing. Thankfully, I’ve been able to go back to work in a factory is Seighford, making roof trusses. I’m a team leader managing a team of nine. Life is good. I’m feeling positive and try to carry on as normal. 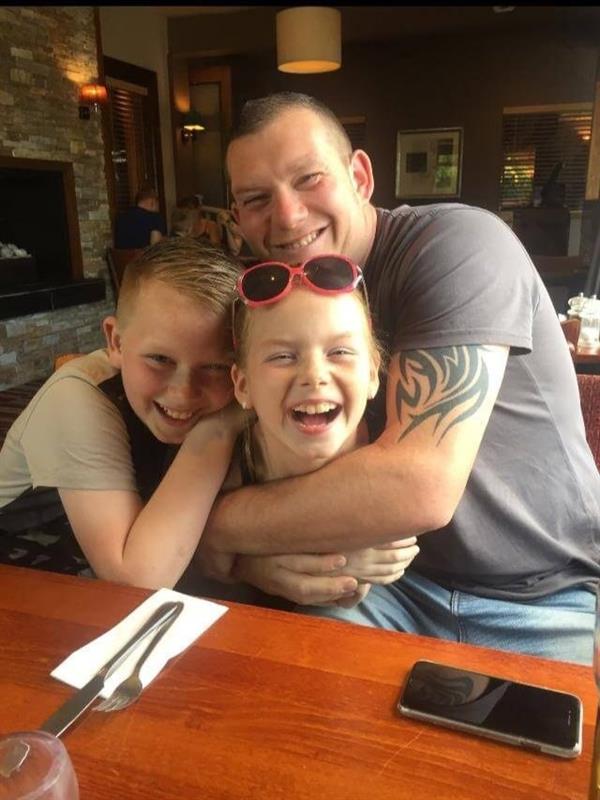