Mum-of-two Marina Fitzsimons, from Portaferry in County Down, first started suffering with severe headaches in 2017 but it wasn’t until 2019 that she was finally diagnosed with a low-grade brain tumour. The 49-year-old has since undergone surgery and radiotherapy and has had to deal with significant side effects from her gruelling treatment. Marina’s positive attitude has helped her to come to terms with her shocking diagnosis, alongside the support of her family and her close-knit community on the Ards Peninsula, who’ve rallied around to help. A tractor run in support of Marina recently raised more than £4,000 for Brain Tumour Research.

Around four-and-a-half years ago, I went to Specsavers in Bangor to have my eyes tested, as I’d been suffering from really bad headaches. They gave me a full check-up, which included a scan and they discovered that I had a lot of pressure behind my left eye. The optician went to speak to a colleague and when she came back, she explained that I needed to be referred to hospital for further tests. She said they’d send a referral letter, which I could expect to receive within the next fortnight. 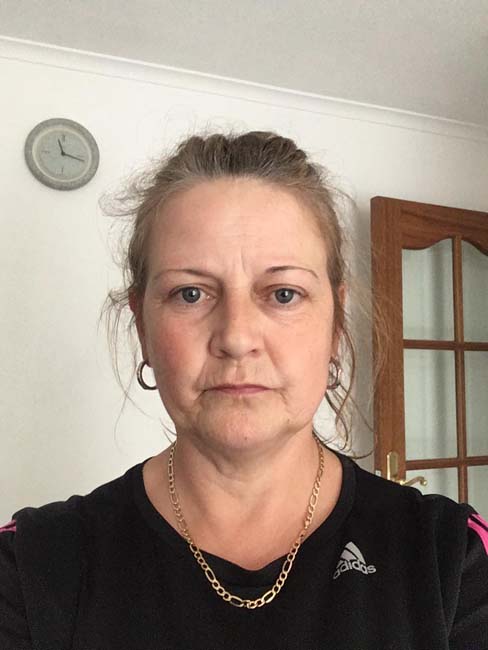 That letter never arrived. I didn’t chase it, as my headaches gradually wore off. I’m not one to make a fuss either. I’m patient and just decided to wait until I heard anything but I never did. Then one day two years or so later, I went to my GP about a completely different matter. He looked at my medical notes and asked me how my ophthalmology appointment had gone. When I explained that the referral had never come through, he re-referred me and I was seen within a couple of weeks at the Ulster Hospital in Dundonald.

“The ophthalmologist suggested I might have thyroid eye disease and I was given medication to treat that. However, further tests indicated that my thyroid was fine.”

In spite of this, I continued to be treated for thyroid eye disease. After a few months, I noticed that my left cheek was protruding and my eye was beginning to bulge as well. I mentioned it to the ophthalmologist on the way out of one of my appointments and asked him if it was normal. He had a close look and agreed it didn’t look right, so he referred me for a CT scan. 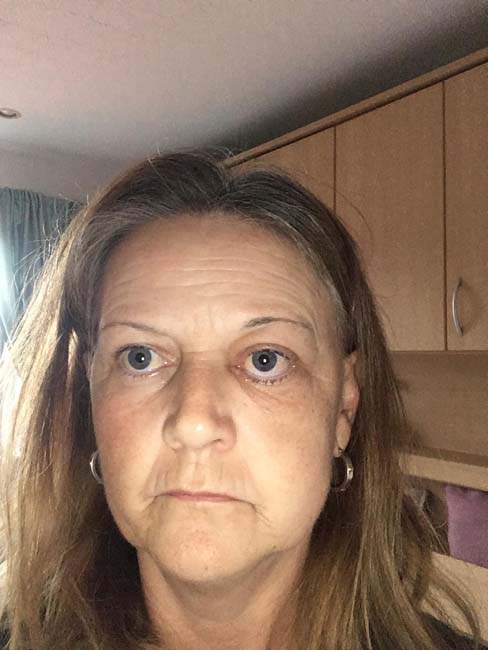 Within a few days I was back in hospital for the scan and shortly after that, I was referred to the Ear, Nose and Throat (ENT) department. The ENT doctors performed a biopsy via my nose and a week later I got the results. They told me it was a meningioma, the most common form of adult primary brain tumour. The good news was that it was treatable. They said they would get in touch with a neurosurgeon, Mr Philip Weir at the Royal Victoria Infirmary (RVI) in Belfast. When I was invited in to meet Mr Weir, he offered to do decompression surgery, which would allow my eye to go back into place. He said, unfortunately, that the tumour couldn’t be removed. It was low-grade but it was wrapped around delicate structures, so a resection would be too risky. 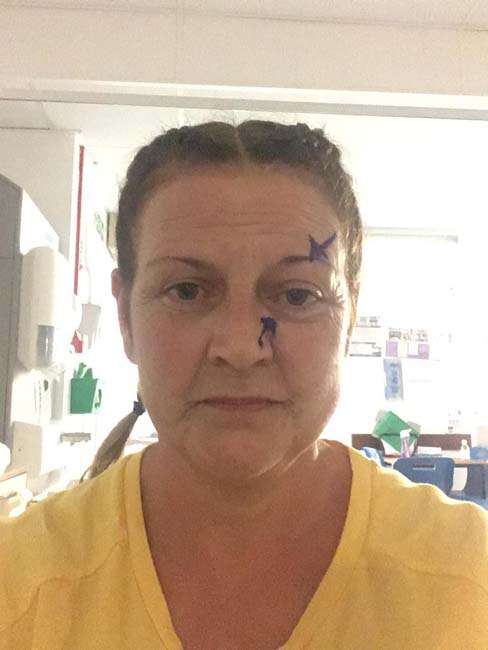 I decided to go ahead with the decompression surgery. It was a lengthy operation, which involved incision via my nostril. After the operation, I didn’t even have a mark on my face. To look at me, you would never have known I’d been through major surgery. I wasn’t in too much pain and felt well. I did, however, have a slight spinal leak but I’d been warned that this may happen and it was easy enough to deal with. I spent six days in hospital before I was able to go home to continue recovering. 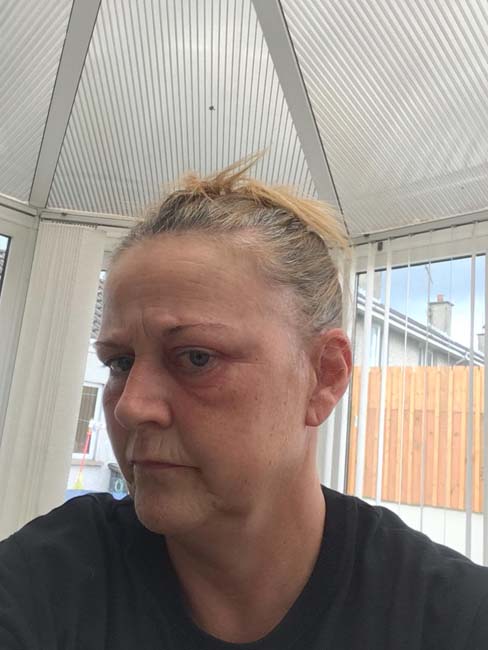 A few weeks later, I began a six-week course of radiotherapy, to target the tumour. My surgeon advised that it was needed, in order to stunt any growth. The toughest thing was having to go in for the treatment on my own. It began in July 2020 when the country was in the first national lockdown, due to the coronavirus pandemic. Hospitals were restricting the number of people going in, so I had to face it alone. My radiotherapy finished in August. I lost quite a lot of hair during the treatment but it went well. 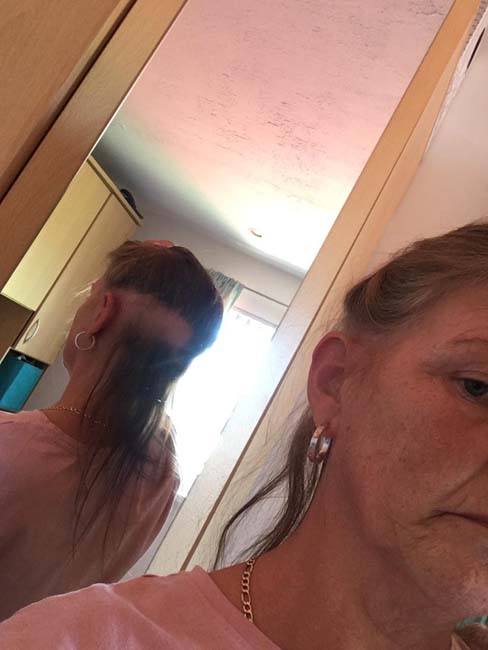 The side effects from the radiotherapy, did, however, begin to cause problems after my treatment finished. I suffered from constant nausea and occasional sickness and, as a result, lost my appetite completely. I lost a huge amount of weight. Just before Christmas 2020, things got so bad that I was admitted to hospital via A&E. They carried out a gastroscopy, which revealed the lining of my stomach had been burned as a result of the radiotherapy, causing an infection in my gut. I wanted to go home as soon as possible and luckily, I was discharged on Christmas Eve, in time to spend the festivities with my family. 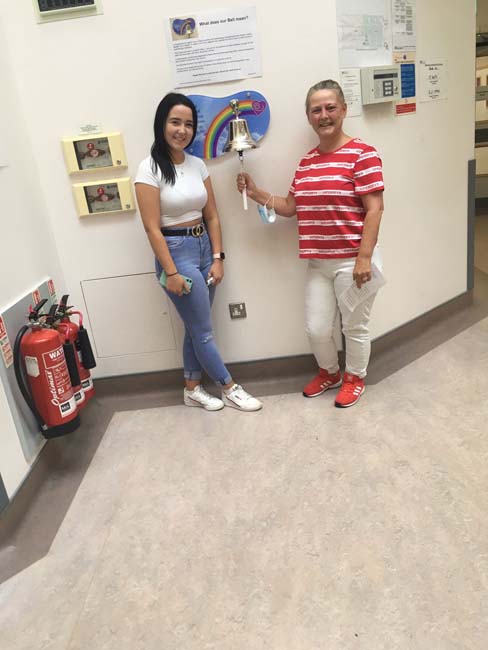 “It’s now a year since my radiotherapy finished in August 2020 and I have heard nothing from my neurosurgeon since. I was expecting to have had a post-treatment MRI scan, to check the status of my tumour but that hasn’t happened.”

Once again, I don’t want to make a fuss by chasing the hospital. I know I was meant to have a six-month review as well but I never heard anything about that. 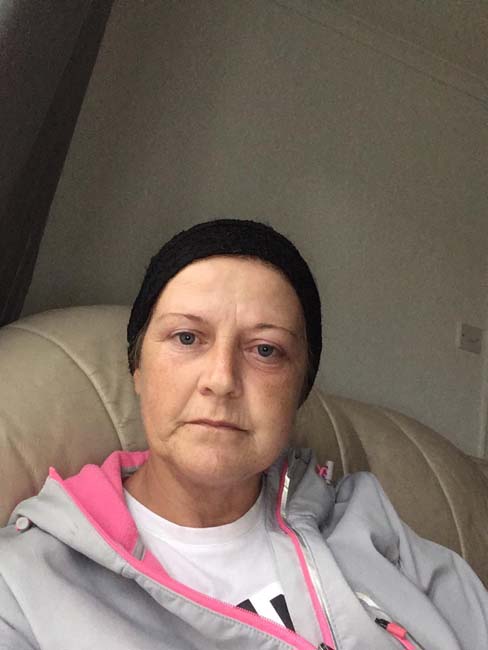 Earlier this summer, I was delighted when my daughter Saskia told me she was organising a tractor run, to fundraise for Brain Tumour Research in my honour. I helped to organise it, along with my son Reece, and together we put on a spectacular event. My daddy was from a farming family and had three tractors before he sadly passed away four years ago, so it was a really fitting occasion. Around 200 tractors took part in the run, as well as classic cars and lorries. We charged £10 per vehicle to enter and had plenty of food and drink options for everyone to enjoy. It was a real community event and I was overwhelmed by the support everyone showed, with many local businesses donating fantastic prizes.

“It was a perfect wee day and the icing on the cake was raising more than £4,000 for Brain Tumour Research.” 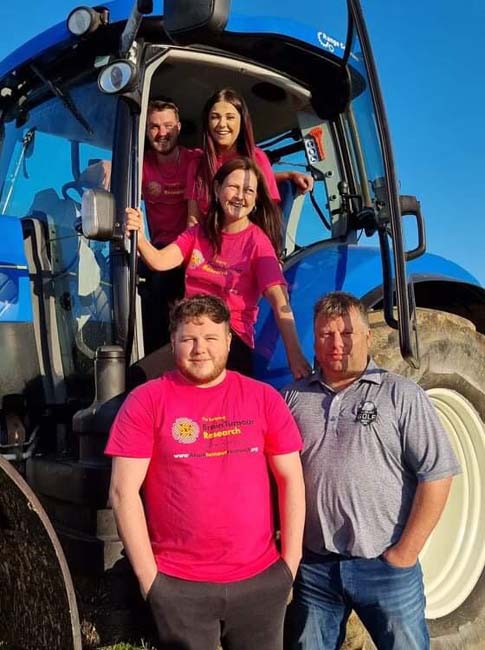 I don’t think too much about the future. Saskia is 21 and Reece is 25 and as they both still live at home with me and my husband Darren, I’m always busy looking after everyone else. I just get up and carry on, putting others before myself. Darren doesn’t like to talk about my diagnosis at all. He’d rather we never mentioned the words ‘brain tumour’. For me, it’s difficult to ignore, as I still have sickness sometimes and I get ‘brain freeze’, where I go blank. The eye bulge is still there too but not as bad as it was before and people say they can barely notice it. 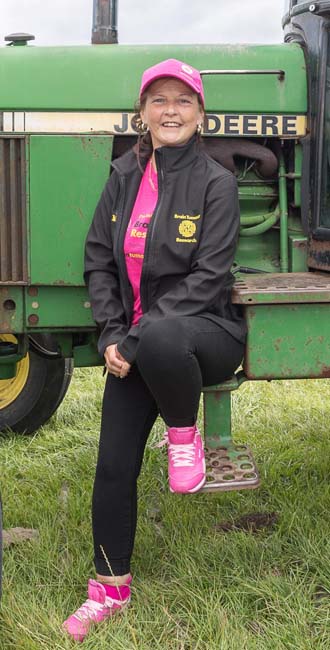 It’s difficult not knowing what my tumour is doing now and I’m frustrated that I was initially misdiagnosed. However, I’m happy and I cope well with everything. With the support of my wonderful family, I’m in a good place. Because of them, I stay as strong as an ox and they probably feel the impact of my brain tumour more than I do. 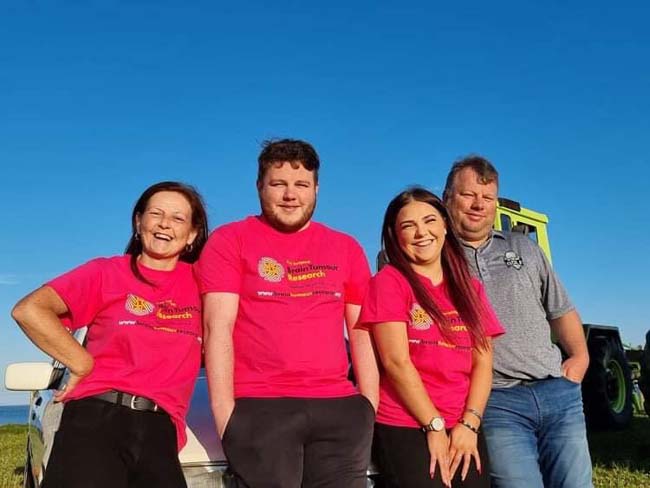 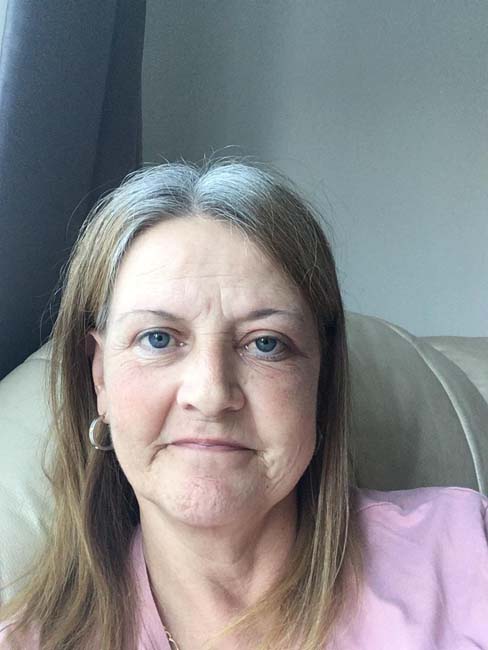