Maria Watson, 27, was diagnosed with a brain tumour in 2013, after experiencing severe headaches and sensitivity to light and sound. The health food shop supervisor, originally from the Greek island of Crete, was left in a ‘watch and wait’ (active monitoring) situation until 2017, when she began waking up in the night, suffering with extreme pain and temporary hearing loss.

I met my husband Scott online. I came over for a holiday to visit, fell in love with him and with the UK and have never looked back since! I’ve been living in Washington in Tyne and Wear with Scott for four years now and we got married in 2017. We share our home with two cats, a dog, two snakes, seven snails and 15 tarantulas! Along with tattoos and body piercings, animals are my main passion and I dream of working for an animal welfare charity one day. Crete is a beautiful island and I miss it, especially the sea, but I count my lucky stars that I’ve been treated for my brain tumour by the NHS in England. I have nothing but praise for the doctors and nurses who’ve looked after me on my brain tumour journey.

My grandfather died from an aggressive, grade 4 brain tumour within a month of being diagnosed, in 2010. Three years later, I started to have unbelievably bad migraines; I couldn’t stand any light or sounds and was suffering from pain in my face and spine. When I received a brain tumour diagnosis, my thoughts turned to my grandad’s stark prognosis and, not knowing whether it was hereditary or not, I was terrified that I may have been facing the same fate. It was soon explained to me, however, that I had a low-grade epidermoid tumour; a rare type of tumour made up of normal skin cells on the outside and fatty acids and keratin on the inside. Only the sticky, outer layer is alive, thus sticking to brain tissues and nerves. They are notoriously difficult to remove.

When I moved from Greece to the UK in 2017, I was being monitored by MRI scans every six months. Increasingly, I began to suffer from attacks of excruciating pain during the night. They would often result in a trip to the Royal Victoria Infirmary (RVI) in Newcastle, where doctors would record high blood pressure readings. The attacks gradually got worse and my eyesight and hearing were also deteriorating.

“I would get sudden ‘electric shock’ sensations, which felt like extreme pins and needles. It had even become painful to swallow”.

In 2018 my neurosurgeon at the RVI decided the best course of action would be brain surgery to remove as much of the tumour as possible. The aim was to relieve the pressure, which was causing all of these horrible symptoms. Thankfully, he was able to remove 95% of the tumour during the six-hour operation. I spent the first few days after my craniotomy on the Intensive Therapy Unit (ITU). Other than experiencing some double vision, I felt absolutely fine and was beginning to recover well. However, a month or so into my recovery, things took a turn for the worse; my eyesight continued to deteriorate and my neck was unbearably stiff. 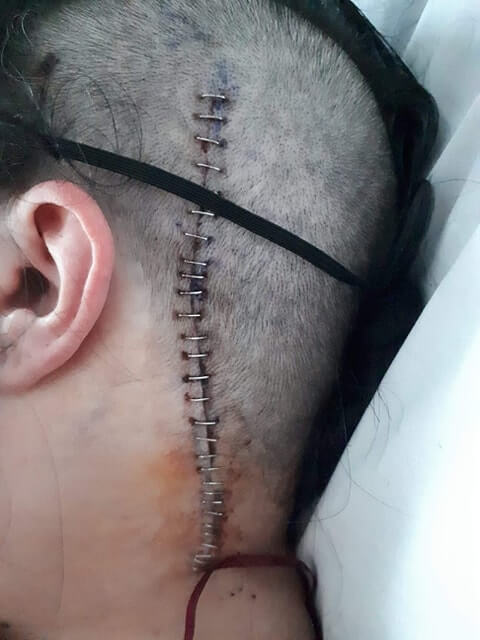 A trip to the Eye Emergency Department later and it transpired I had suffered a nerve damage haemorrhage and swelling behind my eyes. Excess fluid in my brain was creating too much pressure, which was impacting my eyesight. If the optician hadn't sent me for more tests, I would’ve permanently lost my sight! I was referred back to my neurosurgeon, who confirmed my worst fears; I would need more surgery.

“I was frightened but knew it was the only option I had, if I wanted to save my sight.”

I woke up from the operation with a metal rod in my head, connected to an ECG. I still couldn’t see; it was deeply unsettling. This time around I became really ill while I was recovering in hospital. I developed infections, was vomiting and my blood pressure was sky high. My parents travelled from Crete to be with me. 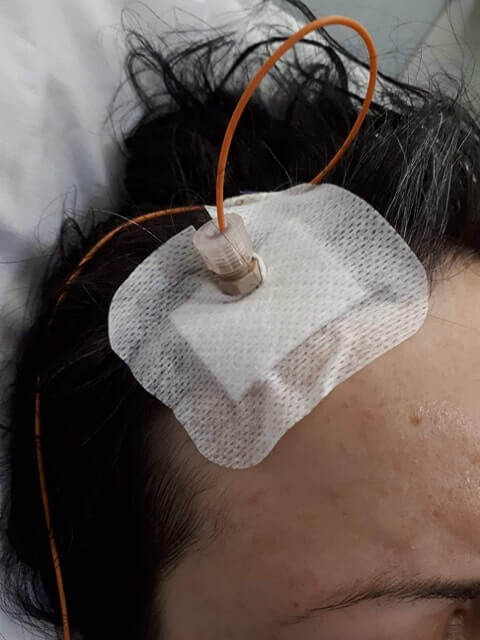 I needed a third brain surgery. This time they inserted a ventriculoperitoneal (VP) shunt and removed a palm-sized piece of my skull, to prevent my brain from swelling up. I am freaked out but also amazed by this device, which ultimately keeps me alive! Every time I sneeze, I feel the metal rod move in my brain and it hurts. But I’m forever grateful to science for this wonderful invention. It also restored my eyesight within weeks of being fitted. Following brain surgery number three, I was exhausted and my immune system was down but the headaches disappeared and I felt much better than after the previous operation.

I went back to work at Holland and Barrett at the end of January 2019. My colleagues have been amazingly supportive; I couldn’t have asked for a better bunch of people to work with. I lost my hair through all the treatment and my work mates bought me a wig, which I love. My experiences have been life-affirming and have pushed me to do things I wouldn’t have done previously. You never know what is around the corner. In January I was promoted at work and six months later Scott and I bought our first house together.

“When I was preparing to go in for my first operation, there was a little girl playing on the ward, waiting to go in for her brain surgery too. The image of that child, no older than four or five, stayed with me and inspired me to fundraise.” 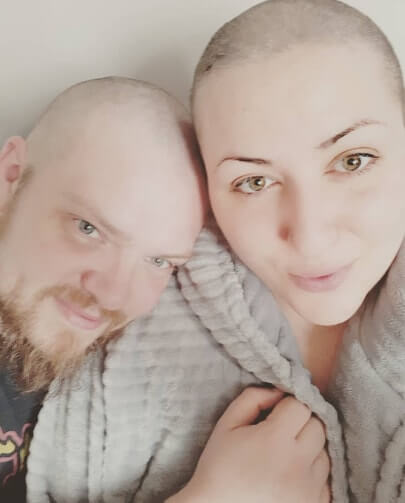 I couldn’t have survived this past year without my rock, my husband Scott, who is always there for me, through thick and thin. When I shaved my hair off, he shaved his too, in solidarity. In September the two of us joined a group of Brain Tumour Research fundraisers for the charity’s ‘Walk of Hope’ at the Rising Sun Country Park in Newcastle. We wanted to raise awareness and to fundraise for a charity doing amazing work to help find a cure for this terrible disease. I had signed up to take part in Wear a Hat Day 2019 but wasn’t well enough in March, so when I saw the email about the Walk of Hope, I jumped at the chance to be involved. It was an amazing event but bittersweet, as I knew that everyone taking part had been affected by this disease in one way or another. 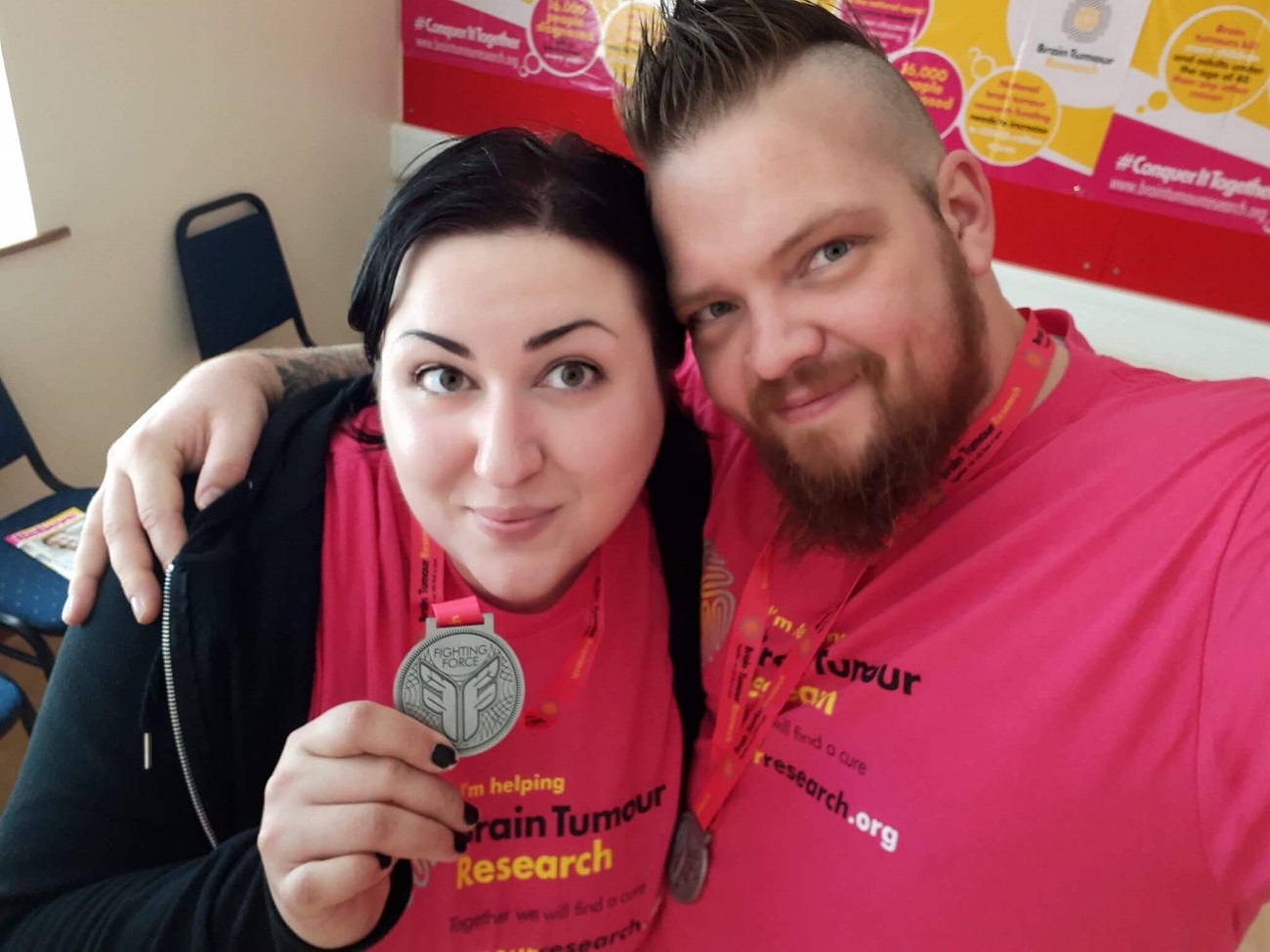 I’m still living with the after effects of three brain surgeries. I’m on a cocktail of steroids and painkillers. Recovery is slow, hard and extremely emotional. Your brain is who you are to the core and this type of trauma can alter everything about you. I’m being monitored with regular scans and I have to see the eye casualty team intermittently too. My family has been there for me throughout; they appear to remain positive all the time, whereas I suffer from anxiety and have good and bad days.

I had a lot of plans that I’ll no longer be able to fulfil, as my life has been severely limited. I can’t bend down to lift things, I have to have a special permit to fly and my lifelong dream to work for the RSPCA may no longer be realised. I was diagnosed with polycystic ovaries before my brain tumour treatment, which meant my fertility was already affected, but the chances of conceiving now are even bleaker and I long to be a mum. But, I’m grateful to be alive and try to live life to the full every single day. 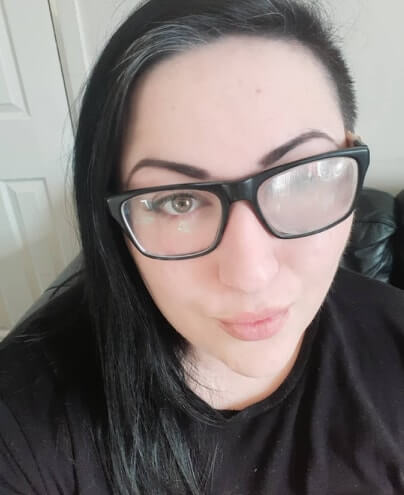