In 2012, just three days before Christmas, Lynda Mercury, 50, was given the devastating news she had a brain tumour. Remarkably, her meningioma had been causing her no symptoms; instead she had an MRI scan because of recurrent sinus infections. After a gruelling 14-hour operation, Lynda, a cake decorator, faced a long journey to recovery while her son, Ben, 12, just wanted his mummy to get better.

“I was warned that the procedure could leave me paralysed on my right-hand side or, even worse, I might not come out of it alive. After a gruelling 14-hour operation, I remained in hospital for 12 days, though I barely remember any of it. I had a weakness in my leg, an intense pain in my head and was in a total state of confusion.”

Christmastime is supposed to be a season of hope and joy, not a time for sadness. But, in December 2012, I was faced with the task of wrapping up my son’s presents in tears – not knowing whether I would be around to see him grow up.

For around two years, I’d been in and out of the doctors about a recurring problem with my sinuses. I’d been experiencing earaches, pressure and infections and was eventually referred to an ENT specialist at Broomfield Hospital in Chelmsford. An MRI scan revealed the cause – an s-shaped sinus – but also revealed something much more sinister, which was causing me no symptoms at all. I was told I had a brain tumour.

I couldn’t believe the blunt and matter of fact manner in which the news had been broken to me. When I got home, I did exactly what I shouldn’t have done and googled my symptoms, which made for depressing reading. I confided in my husband, Andrew, and sister, who is a nurse, and they helped me to get over the initial shock. It was such a mammoth thing to have to deal with. I was referred to a neurosurgeon who told me that my tumour was a meningioma. I counted myself lucky that, by the time it would have caused any symptoms, it would have been too late.

Christmas came and went and I was fraught with worry. The seven weeks I had to wait to see a neurosurgeon were the longest ever. When I finally went to the appointment, he said that he was 90% sure my tumour was low-grade and non-cancerous and I was given the options. I was advised not to have gamma-knife radiation as this would have made my tumour swell and, with its close proximity to vital blood vessels, this could have disastrous effects. The other options included surgery or to “watch and wait”, with routine scans to monitor growth. Ben has autism and found it very traumatic when I had a hysterectomy a few years earlier, as it completely altered our family’s routine, so I decided not to go ahead with any surgery.

So, for the foreseeable future I had a routine MRI every six months. Though I tried to carry on with life and focus on my work as a cake decorator, my diagnosis was a pressing worry. I couldn’t even go on trips away to escape it all as the travel insurance was extortionate. I was relieved that I didn’t lose my driving licence, unlike many other brain tumour patients.

After a year of scans at Broomfield Hospital, I was transferred to King’s College Hospital in London as they were better equipped and could give me my results on the day of my MRI. For two and a half years, there was no cause for concern but I knew things were different when I walked into a room full of medical staff in December 2014. My tumour had grown significantly and was now dangerously close to the vessels that kept my heart beating and my lungs functioning. The consultant said he didn’t want to leave it untreated as there could be fatal consequences if it attached to those vessels.

Despite what I was told, I was adamant that I was going to enjoy Christmas with my family and so went ahead with surgery in the New Year. I was warned that the procedure could leave me paralysed on my right-hand side or, even worse, I might not come out of it alive. After a gruelling 14-hour operation which removed all of my tumour, I remained at King’s College Hospital for 12 days, though I barely remember any of it. I had a weakness in my leg, an intense pain in my head and was in a total state of confusion. I wanted to sleep for 18 hours a day but the nurses, who checked my vitals every 15 minutes, prevented this from happening. I felt 100 years old. The worst part was having 45 staples in my head removed after a week in hospital; it was excruciating.

Despite being older, Ben has struggled.  I tried to keep his routine as normal as possible by planning in advance and getting support from my family and friends but, as I was bed-bound for three months, there was a limit to how much I could do. I couldn’t even shower alone or wash my hair for weeks. As time passed, I got more independent and was able to walk him to school with help from a friend, although it took a good 18 months for me to recover properly.

Nowadays, I’m back at work and keeping busy, planning for weddings and events in 2020, but I’m still suffering from the surgery. I have painful lumps on my head from screws which hold a metal plate in place over my skull. I can’t wear helmets and I’m very anxious about getting knocked while in public, as my scalp is so sore and tender. I have a routine scan every six months but I thank my lucky stars that my tumour was discovered incidentally, after seeing the GP for an unrelated problem. It could have been a very different story for me and my family. 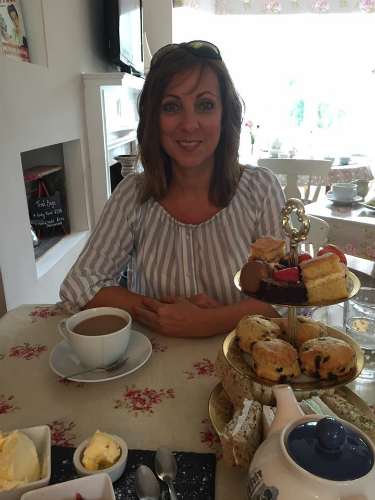