Luke had been suffering from headaches and seeing flashing lights. He discovered he had a brain tumour when a university colleague conducted an MRI scan. Currently undergoing chemotherapy, Luke, aged 29, is about to complete his PhD in neuropsychology. He has a twin brother Alex, and a sister Hayley. He lives in South Molton, with is partner Julia. Also supporting him is his mum Angie, who lives in Plymouth.

We were living in Plymouth where we ran a wholesale flower business when the twins arrived. Along with our daughter Hayley, Luke and Alex kept us busy. When the boys were around six months old we noticed that Luke wasn’t grabbing out to touch things with his right hand. We were devastated when he was subsequently diagnosed with cerebral palsy as a result of having been deprived of oxygen at some stage during birth. We were told he may have difficulty walking but, fortunately, his only symptoms are a slight weakness down his right side. Luke was always determined to do whatever Alex did and I think having a twin definitely helped him to go on and achieve whatever he wanted.

After attending Montpelier School and Plymouth College, Luke went to Bath Spa University to study psychology and then moved to Exeter to do his masters. He later transferred to Cardiff University to work on his PhD in neuropsychology.

In November 2010 Luke was very poorly with glandular fever. He was having severe headaches and it wasn’t until Christmas that he started to recover properly. In January 2011 he was having headaches with flashing lights at the side of his eyes. The department at Cardiff where he was working at the time had an MRI scanner and one of his colleagues scanned him and discovered the tumour. Luke came straight home.

Luke is the most positive person in the world and he was more concerned about what my reaction rather than his own situation. I felt total shock and despair, a million times worse than when we were told he had cerebral palsy. This was something which happened to other people not my children. I work as a community psychiatric nurse and, with my medical training, my first thought was that it was definitely cancer.

We went to our GP and were referred to a consultant at Derriford Hospital here in Plymouth. He had another scan and we were told the tumour, which was at the back of his head, did not look cancerous. Luke underwent surgery to remove the tumour and, initially we were told it was low-grade and not cancer. Luke was about to be discharged from hospital when, seven days after the operation, we were called to a meeting. I was working at Derriford at the time and didn’t really think too much about it. We were told that the initial findings were wrong; Luke had a grade four glioblastoma multiforme (GBM) brain tumour.

It was unbelievable. It was like being on a rollercoaster. First you find your child has a brain tumour, then you think it might be OK only to be told the next minute that things are not good at all.

Although I knew about brain cancer to some extent, I wasn’t aware of GBM tumours but I did know this was significant.

Straight away, Luke asked the consultant how long he would live for and was told between five and seven years. Luke was put on a course of chemotherapy and radiotherapy and we have had great help from a support nurse.

Luke was able to have a break from treatment for about six months but now he is back on chemotherapy every three weeks. A scan in May 2012 revealed more concern. Two inoperable tumours were successfully treated but and one remains. Currently on the drug Avastin, the tumours are stable and Luke is doing OK. He has been given extra time for his studies and is about to complete his PhD. 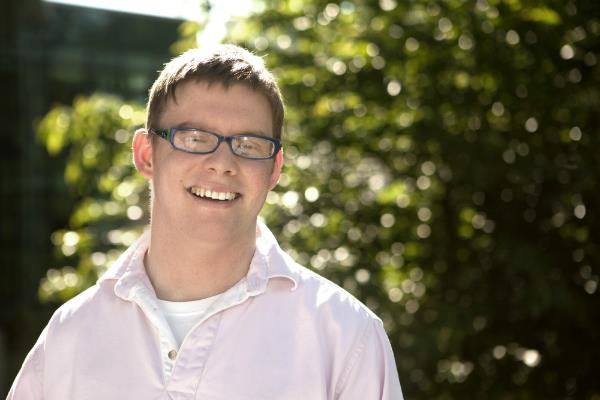