Lisa was just 21 when she was diagnosed with a brain tumour. The shock news came as she and her family were coming to terms with the loss of a seven-year-old cousin to the same disease. Lisa underwent surgery and treatment, went on to graduate with a degree in architecture and took up Bollywood dancing a few years ago.

“In a way, being diagnosed with a brain tumour has been the worst thing and the best thing that has ever happened to me. I have had such a happy ending to my brain tumour story but nobody knows what is around the corner or down the road. I have learned that you can’t assume you will live until you are in your 80s or 90s and facing your mortality at such a young age is life-changing. It has taken time to come to terms with these experiences; I am now able to accept this as part of my life’s journey.”

I was 20 when we lost one of my cousins to a brain tumour. He was just seven and, of course, his death affected our family deeply. That same summer I started to have headaches, which I mentioned to my mum. She advised me to see a doctor but I put it off. The headaches continued through my second year of studying for my degree in architecture at the Kent Institute of Art and Design, Canterbury. I put the pains I was getting down to studying hard and spending a lot of time at a drawing board. I can also remember having severe, banging headaches when exerting any effort when away on a field trip to Rome – I thought I was going down with flu.

During the months preceding my seizure, I began to feel quite down and depressed. I saw the doctor a couple of times and was referred to a psychologist. I felt it was helpful to have someone to talk to about my feelings of isolation and loneliness.

It was suggested that I should take antidepressants but I refused as I felt whatever was wrong with me was something that I should talk through. I had a lot going on – in addition to losing my cousin at the end of September 1992, my granddad had died at the end of January 1993. It got to the stage where I was feeling apprehensive and worrying about lots of things including who was going to be next.

When I finished my second year, I eventually heeded my Mum and went to see the doctor but it was clear that he didn’t believe me and dismissed me with a diagnosis of migraines.  Not convinced, mum also sent me to the optician who couldn’t find anything wrong so I started treatment for migraines with the family osteopath. It was 17th August 1993, that things took a more sinister turn. I was meant to be going out but, went to bed feeling sick and generally unwell with what I thought was a migraine. My mum came up to check on me and was horrified to find that I had collapsed in the bathroom. I apparently looked grey and was rigid like a board (I was having a seizure). I still feel distraught when I think of my mum discovering me – she laid me out on the landing, told me she was shouting: “Can you hear me? Are you dead?” I managed to answer “I’m here! I’m not dead!”Only after she got me to recite the Lord’s Prayer did she call for an ambulance.  When it arrived I was sitting up and – apparently – walked into the vehicle.

There was doubt that there was anything wrong with me but I was taken to Chase Farm Hospital in Enfield to be checked over. It was while I was there that I had another seizure. That was the first indication that I may have a neurological problem. I was transferred to Bart’s for a scan and, the next morning, I was told by a consultant that I had a cyst on a brain tumour. He asked if I had any questions, I looked straight at him and asked: “Am I going to die?” His reaction reminded me of a cartoon. He was so surprised that I had asked him such a direct question straight out that his jaw dropped open. I think my diagnosis was exceptionally hard as we had seen my little cousin get so poorly and lose his life to this dreadful disease. I needed to know straight away if it was going to get me too.

There was a lady named Val in the hospital bed next to me. She was strong, confident and always so positive although she had already had three operations.  I got my drive and determination from her. I met others too, some with the same optimism, others whom I supported.

I discovered – fortunately for me – that my tumour was an operable low-grade, slow-growing astrocytoma. After a stack of blood tests and various scans, the tumour was successfully removed during a seven-and-a-half-hour operation on the Thursday before the August bank holiday. It was a very frightening experience. My mum was able to be there for me every single day.  I had such wonderful support from all my family with visits from friends and phone calls and cards from all over the world, which meant so much.

Two months after my surgery I began a course of radiotherapy, striking up friendships with other patients also waiting to get “zapped”. At that time there weren’t organisations which you could turn to for support and I hope I made people feel that it was OK to talk about what we were all going through.

The radiotherapy caused my hairline to recede particularly on the right hand side of my head where the treatment was most focused. It hasn’t really grown back properly but I it’s my war wound and I am quite proud of it.

Any remaining tumour cells were destroyed by the radiotherapy and I continued to have scans and other follow up appointments and was finally signed off by my consultant on St Patricks’ Day, 17th March 2014. Although by then I was working full-time, I had met and married Geoff and gone back to living a normal life, the journey had been a long and difficult one.

Sadly, those I met during my time in Bart’s were not so lucky; Val lost her battle along with the others. Dealing with their deaths hit me very hard.

When I look back and think that I survived a brain tumour, it reminds me of how lucky I am. It has had a lasting effect on me as sometimes I feel that I haven’t made enough of my life. Others have been through the same thing yet their story has turned out so differently. Physically and emotionally, my brain tumour is the worst thing that has ever happened to me. It was devastating and very scary but, on the other hand it was a positive thing because it showed me how many people love and care for me and I remain buoyed up by that. I have many wonderfully close friends and I am so grateful for that. I am a Division & Group Executive at the Institution of Mechanical Engineers, where I have spent most of my career, and I love Bollywood dancing!

My message to other people is to be determined and stay positive. A lot of my fight was mental. When you are diagnosed with a brain tumour you are in a very dark place and I hope that my experience will help others. My friend Val got married to her wonderfully supportive boyfriend in hospital – I enjoyed witnessing that event; I was also there when her consultant explained that there was nothing else they could do for her. She was devastated at first but then persisted in getting out and about in her wheelchair, propelled by her loving husband.

I have had such a happy ending to my brain tumour story but nobody knows what is around the corner or down the road. I have learned that you can’t assume you will live until you are in your 80s or 90s and facing your mortality at such a young age is life-changing. It has taken time to come to terms with these experiences; I am now able to accept this as part of my life’s journey. 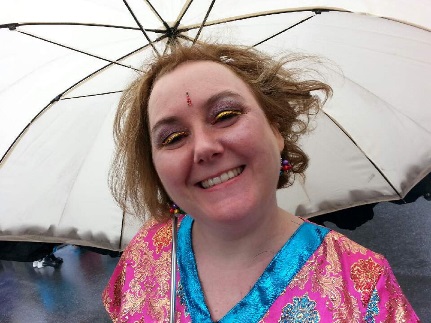