Lily’s Mum, Lorraine is a trained and experienced midwife, but nothing could prepare her for the day when her six-year-old daughter was diagnosed with a brain tumour, many months after she first started displaying worrying signs which were repeatedly dismissed by doctors. Now Lorraine is determined to raise awareness particularly of the symptoms of brain tumours to ensure that patients are given the earliest possible diagnosis.
It was five years ago in January 2010 that we learnt that our eldest daughter, Lily, now 11, had a brain tumour. Back in September 2009 she had a week of headaches just after I gave birth to my second child.  We took Lily to the GP but he was not concerned.
In October I noticed that Lily was walking off balance and throwing her left leg out to one side. We went back to the GP who thought something might not be quite right with her cerebellum and referred us to a consultant at the John Radcliffe Hospital in Oxford.  By this stage, I was really quite worried and tearful, so we decided that we would rather pay privately to have an earlier appointment with a paediatric neurologist.

I remember Lily being asked to perform a number of tests, including pointing her finger to her nose and standing on one leg.  I was quite alarmed to see Lily was unable to do either of these. The doctor thought she might have dyspraxia, even though up to this point she had reached all her milestones at the right time. We were asked to come back after Christmas.

In the meantime, we saw another of the GPs at our local practice who was also a family friend.  She felt that things didn’t add up and re-referred Lily to Oxford.

During the first and second weeks of January 2010, Lily started vomiting in the mornings and experiencing awful headaches which eased as the day went on.  We saw a different GP every day for a week and it was then that we started to suspect that Lily might have a brain tumour.  My husband took Lily to the GP one morning and voiced our concerns.  The doctor, however, thought Lily probably had a virus, but referred her to hospital immediately just in case.

As I was still breast-feeding, my husband Shane took Lily to Milton Keynes General to check for meningitis. They wanted to keep her in – Lily was vomiting again. By the time they decided to do a CAT scan I had arrived and was with Shane and Lily in the hospital.  We were in the room with the radiologist as the pictures came up on the screen. I could see a large shadow on the image and my legs turned to jelly.  It felt like my feet couldn’t walk – like I was going to buckle.  Everything drained away.
My feelings were of sheer loss, fear, panic and desolation – almost like grief.  I didn’t know what was going to happen.  It felt like I was going to lose my first-born child.  I couldn’t imagine how I was going to deal with this, let alone how I could carry on with my life.  Nothing seemed important anymore, apart from what I had to do to protect Lily

Added to this was the fact that at this stage we had no idea whether the tumour was cancerous or non-cancerous.

Until we were transferred to the John Radcliffe Hospital in Oxford in order for Lily to have an MRI which would show much greater detail and to undergo surgery, we had an agonising wait to have some clarity about what we were facing.  It was very reassuring to be met at the door of the hospital by the consultant and quite a lot more reassuring to hear, after the MRI, that he was 98% certain that Lily had an astrocytoma – a non-cancerous low-grade or ‘benign’ brain tumour.

After a seven or eight hour operation, during which surgeons removed as much as they could of a 10cm tumour, we were given confirmation that Lily had a grade I polycystic astrocytoma which was touching her brain stem.  We were also told that as part of her treatment she would have a low dose of chemotherapy.  Now we know that Lily was very lucky to have been diagnosed with that kind of brain tumour, but then it was all completely terrifying.

A couple of weeks after being discharged from hospital, we noticed fluid pouring down Lily’s neck.  Our poor little girl had to undergo another procedure to have a shunt fitted in her brain to drain the excess fluid.

Lily had her first post-surgery MRI in May 2010 followed by our first meeting with her oncologist. He decided to adopt a “wait and see” policy, watching whether the tumour grew again before embarking on a course of chemotherapy.

Lily was scanned again in September 2010 around the same time that we found out that I was pregnant with a little girl.  Instead of feelings of joy, I was terrified that the daughter we were expecting was to be a replacement for Lily.

In a further appointment with Lily’s oncologist, he told us that in his opinion Lily would benefit from further surgery, so Lily went under the knife again a few days later. Finally, after four hours of sitting and waiting and hoping that everything was going to be ok, we heard the news that Lily’s surgery was over and that there was just 1% left of the tumour – it was not possible to remove the part of the tumour touching the brain stem. The cyst associated with the tumour had also been drained and this was to prove really useful for her coordination.

Following this second craniotomy, Lily’s oncologist told us he had had a change of heart and would not be going ahead with the chemotherapy treatment.

Poppy was born in May 2011.  She was a gift we had not expected, which felt like a blessing at a time when we had found out that things were much more hopeful than they had been.

Lily’s three monthly scans became six-monthly scans and in July this year she will have the second of her now annual scans until the tumour has shown no sign of regrowth for ten years.  We are praying that when we go back for the results we will be given the news that there has been no change.  But the experience of her first MRI scan and the horribly loud clunking sounds involved, traumatised Lily so much that ever since she has had to have a general anaesthetic in order to be scanned.  Even psychotherapy and regularly watching a Great Ormond Street video to try and desensitise her, have failed to ease the trauma she feels.

For me, I feel the same level of panic each time leading up to Lily’s next scan.  I obviously have to bury this from Lily and our other children and try and keep a lid on my sheer terror.  You carry the burden with you everywhere - the waiting brings back the acute feelings I experienced in the early days and then after the scan you have to wait again for a week or so to get the results.  It’s the most awful wait in the world.

The level of stress you live with as a parent is excruciating.  I have to keep reminding myself how well she is doing, but it is almost worse now that we are five years on, wondering what might happen next.  If Lily feels ill, especially if she is sick or has a headache it is a real worry.  And Lily panics herself.  I didn’t find out for a long time that months before we knew she had a brain tumour, Lily used to be sick regularly in the morning but used to just swallow it back down.  It was heart-breaking hearing her say that and to think about it now.

I watch Lily with eagle eyes all the time; that fear never goes.  I particularly watch her balance.  But I have to try to be as strong as I can for all the children.
On the plus side, it is fantastic to see how much Lily’s balance has improved. She loves horse-riding and can now stand up on the back of a horse and do rising-trot. She rides at my Mum’s stables as much as she can – it’s great for her balance and coordination.

Lily is charity rep at her school and has introduced and organised Wear A Hat Day for the last two years.  And will be doing the same again this year.  She has been supported so well by the staff and pupils there – when she was diagnosed there was a whole school collection for Lily and they bought little gifts for her to open every day and wrote her so many “get well” cards.  All her friends have grown up with her and accept her for who she is – they don’t treat her any differently.  And Lily is very open and matter of fact about her brain tumour.

She is now an 11 year old with an attitude who bosses her Dad and Mum around and I wouldn’t have her any different.  I can’t believe she will be off to secondary school in September.

But, for me, as Lily’s mother, the mental scars still remain. When I returned to work at the hospital where Lily was first diagnosed, I had an awful panic attack when I had to take a patient to the scan room. And I still find it difficult to see ambulances coming in when I am on a night shift as it makes me recall Lily’s transfer from MK General to the John Radcliffe which took place at night while I was thinking: “I don’t know whether my child is going to come out of this alive.”

It has taken me a long time to come to terms with what has happened – if I ever do fully.

I am very concerned about the initial misdiagnoses we were given and am resolute that I want to see GPs trained much more effectively to spot the signs of a brain tumour. Mothers know when something is wrong with their child and they know they have to trust their instincts. I am so thankful that the brain tumour Lily had was not an aggressive one, because the delay in diagnosis could have been a disaster.  But a benign brain tumour is not a walk in the park – you are forever thinking the tumour could grow back and puberty could be a key time when things could change.  We will have at least another five years of annual scans.

When your child has been through what Lily has, it is completely life-changing.  It makes you reassess your life and what is really important. No one knows what is around the corner. 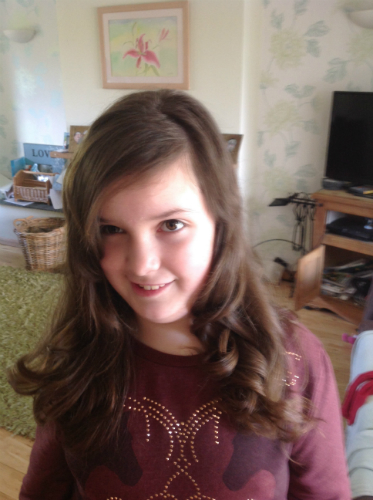