Laura was just 21 when she was diagnosed with a low-grade brain tumour. The swimming instructor and keen horse rider had suffered from debilitating symptoms for more than two years, including migraines, sickness, and psychosis, which were misdiagnosed as a mental illness. A year on from her diagnosis, she is still adjusting to life as a brain tumour patient. She’s at a crossroads as she decides whether to have further treatment.  Her plans of moving into her own home and thinking about a family have been thrown into the air.

Up until my brain tumour diagnosis, I thought I was invincible. At the age of 21, I never worried about my health and my own mortality was never something that crossed my mind.

“When the doctors first discovered something abnormal in my MRI scan, I joked whether they’d found a brain. I could never have imagined I had a brain tumour.”

My diagnosis changed my outlook on life. I’m not sure whether or not I want kids, for fear of them inheriting the disease or seeing me suffer with symptoms. My plans of moving in with my boyfriend Harry were put on hold. I had to give up my driving licence and, living in the middle of the Somerset countryside, with that I lost my independence.

It took over two years to get a brain tumour diagnosis so I’m keen to share my story to help raise awareness. It was frustrating to be told by doctors that my symptoms were caused by mental illness – I was diagnosed with anxiety, depression and even bi-polar. I sensed that my symptoms weren’t being caused by mental illness; I’m quite an emotional person and flip between happy and sad moods, but this is just part of my quirky personality.

When I experienced my first migraine, it was horrible. I remember waking up in the middle of the night not being able to see properly. It was the worst head pain, so bad I was in floods of tears. The migraines continued and I had them up to three times a week. They were crippling, made me sick and all I could do was cry.

The doctors were unsure of what was triggering my migraines and eventually put them down to anxiety and depression. I was prescribed anti-depressants which didn’t do anything to help and after a few months I was told I might have bi-polar disorder. 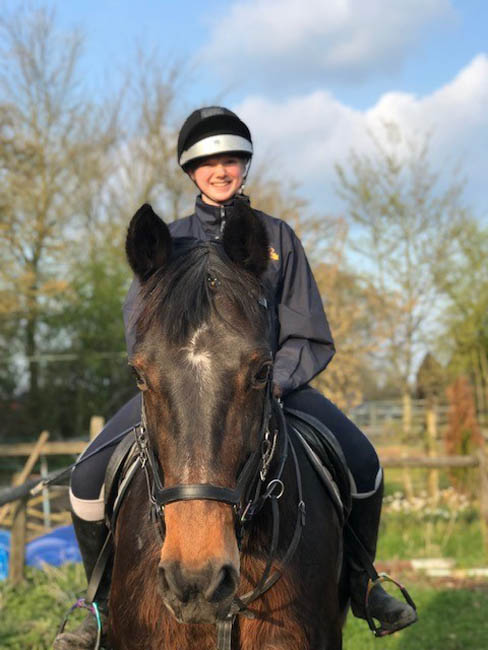 By October 2018, I’d learned to live with my headaches but my physical symptoms soon became more debilitating. I was in a 1:1 meeting with my manager at Wincanton Sports Centre when, without warning, I projectile vomited. It was terribly embarrassing and I’d also started to suffer from incontinence episodes which made me feel down and as if my independence was being taken away.

A month later, I collapsed while shopping with my mum. I was also struggling with my mobility, so could no longer enjoy running and riding my horse, and became really clumsy. When I started having episodes of psychosis, things got really scary and my dad wondered if I had multiple sclerosis (MS). I’ll never forget seeing red eyes staring at me in my bedroom but Mum and Dad couldn’t see anything at all. 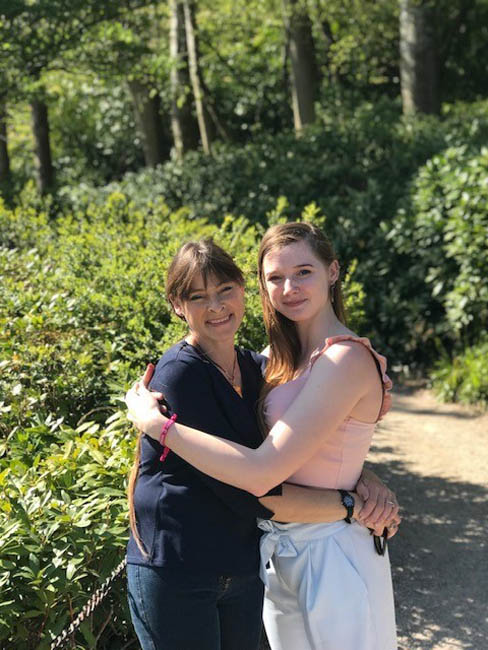 Things came to a head when I collapsed and fell downstairs in December 2018. My dad found me and took me to Yeovil District Hospital, where I had an MRI scan. Mum and I received the results in a private room; I thought it might be serious.

“There was a tennis ball-sized growth on my brain; the doctors were unsure of exactly what it was. I struggled to take the news in but Mum was asking lots of questions and I remember the word cancer being mentioned.”

I was blue-lighted to Southmead Hospital in Bristol the next morning, where I was admitted to an intensive care unit (ICU). I was told that if my tumour had been left undetected, I wouldn’t have survived until Christmas. I needed emergency surgery to prevent me having a stroke or a seizure which I might not recover from.

Mum and Harry were with me as I was wheeled into the operating room. The 13-hour procedure removed 80% of my tumour but parts of it were inoperable. I don’t remember anything from surgery but a biopsy confirmed that my tumour was a low-grade central neurocytoma and we breathed a sigh of relief that it wasn’t cancerous. 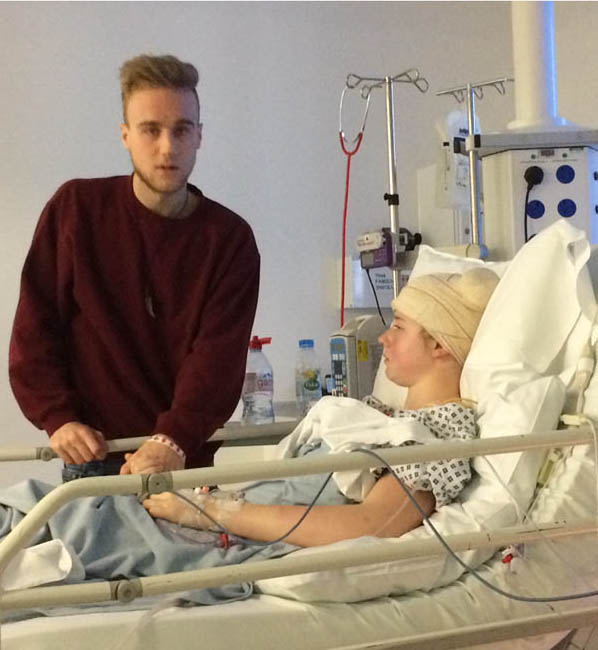 “Recovery was tough and I lost two stone. I had to re-learn how to talk and was in constant agony because my muscles had wasted away.” 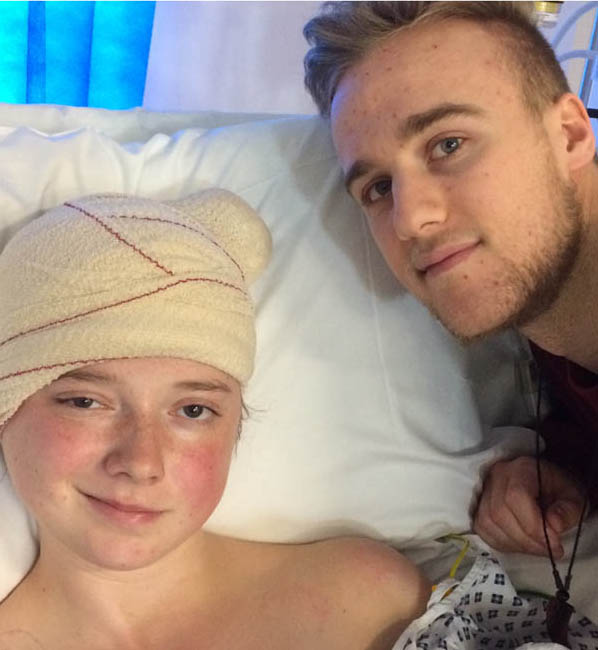 I was pleased to be discharged in time for Christmas and was back at work in the New Year. I’d just about found my feet when, in May 2019, I had a seizure and was off sick for a couple of days. I had another seizure this September, while teaching a swimming lesson, and I had to be pulled out of the pool by lifeguards. I took a few weeks off to recover, which was really hard as I just wanted things to be back to normal. 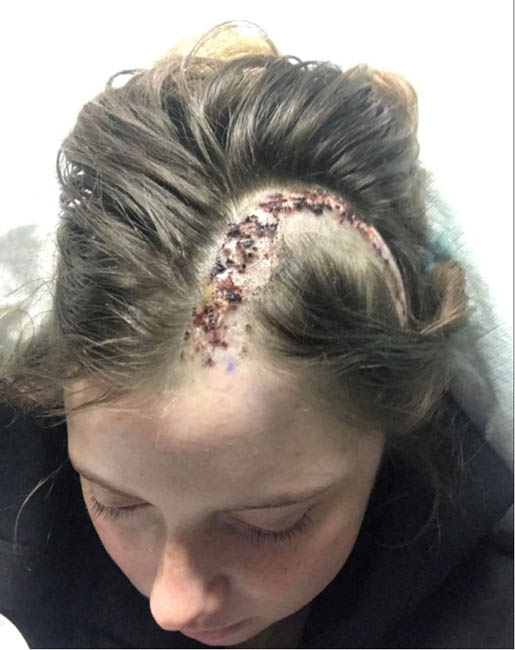 “I’m currently waiting for the results of my latest scan and I’m trying not to worry about it too much. I don’t want my brain tumour to define me or take over my life, but sometimes I find it hard to put on a brave face.” 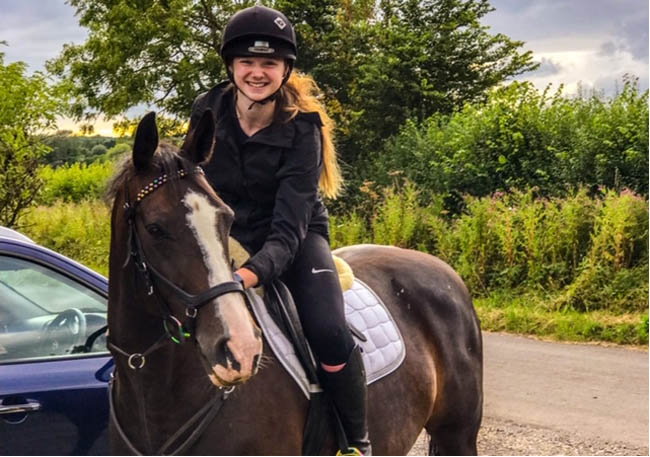 Going forward, I’ve been offered further surgery and radiotherapy. I’m averse to having more treatment as I don’t want to take more time off work to recover. I adore my job as a swimming instructor and it is the reason I get up in the morning. Because of the location of my tumour, radiotherapy could leave me infertile or even blind and this is a really worrying thing to think about, especially as a 22-year-old. 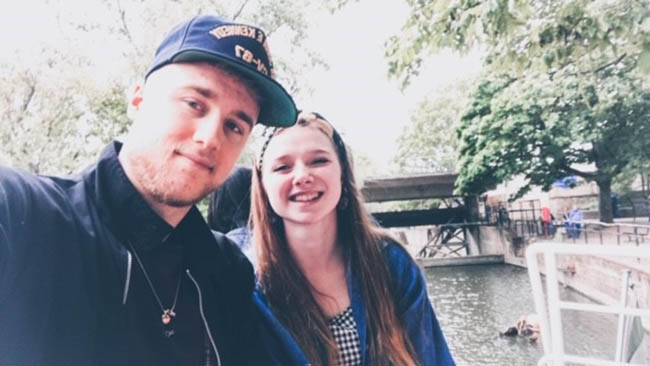 A brain tumour diagnosis doesn’t just affect the individual but everyone around them too. I hate that Harry feels so helpless and I know it also deeply affects my two younger sisters and parents, but I’m grateful to have their support as well as that from my wonderful employer. 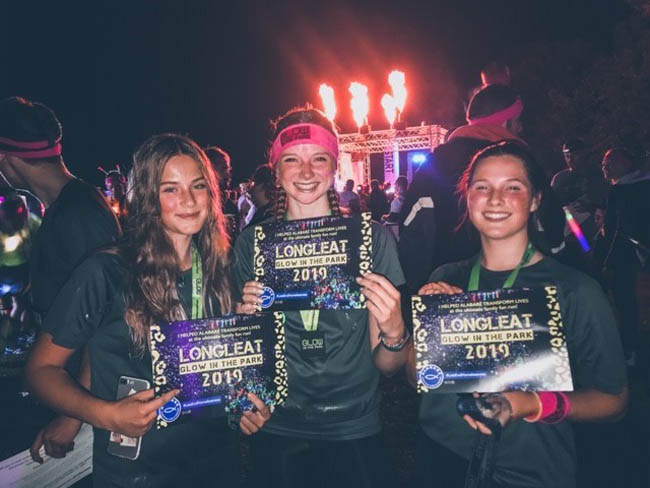 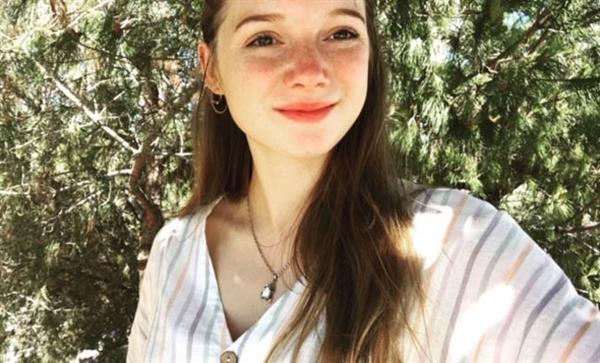