After experiencing hot flushes and dizzy spells, 29-year-old Laura Liver thought she was coming down with virus, however she received the devastating news that she had a brain tumour. After undergoing invasive surgery and treatment over the last 18 months to control the growth of the tumour, Laura is determined to make the most of life and enjoy every precious moment as she heads towards her milestone 30th birthday.

“With Marc and my mum and dad by my side we were shown my scans and I let out a gasp. There was a black mass, the size of an apple, on the left-hand side of my brain and it was then the consultant confirmed it was definitely a tumour. I just remember mum crying next to me as Marc held my hand.”

Life always throws you curve balls when you least expect it and, in August 2016, I received the devastating news that I had a brain tumour.

Eight months earlier I started to not feel like myself as I travelled home from a holiday in Australia. My mum and I were waiting for our connecting flight at Abu Dhabi Airport when I began to feel light-headed and started shaking. I brushed it off, thinking I might need something to eat or that I was coming down with a virus from being on the plane.

I thought I would be back to my old self within a few hours, but these waves of feeling unwell kept returning over the coming weeks. By Christmas my hands were shaking regularly and I was experiencing dizzy spells and severe hot flushes. I even had to drive with the car windows open to try to regulate my temperature.

My doctor could not find any cause for the symptoms and even took a blood test to be sure. When the results came back clear I thought it must just be me and it would get better on its own over time.

By March I was having these ‘seizures’ seven times a day, but at worst I could experience nearly 30. My doctor ran more tests, but still couldn’t find the cause. He referred me to Wakefield Hospital to see a specialist. Still there was nothing which could pin down my symptoms and while I was ready to leave it and do my best to carry on, my mum and husband Marc insisted I go back to the doctor.

After meeting with the doctor again, they felt that an MRI scan would be a good next step in trying to decipher the cause of my symptoms. I think I knew something was wrong when I walked into the room to get my results later that day. It was then that they said they had found something on my brain and believed it to be a tumour.

It was two days later that I sat down with the consultant neurosurgeon and shown my scans. When I saw the image, I let out a gasp and the news of the tumour hit me. There was a black mass, the size of an apple, on the left-hand side of my brain and it was then the consultant confirmed it was definitely a tumour. I just remember mum crying next to me as Marc held my hand.

The name they gave to my tumour was an astrocytoma, they believed it was low-grade and no action was needed right away. They would just watch and wait to see if the tumour grew or changed over the coming months, which was nerve-racking, but I just wanted to feel better.

A few weeks later we met with the neurosurgery team again and I underwent lots of assessments to test my vision, balance, coordination and memory. The diagnosis also meant the loss of my drivers licence which was frustrating and made getting to work was more challenging.

Over the following six months I had further scans to check the tumour. In November 2016 I underwent a functional MRI where they tested how my brain was functioning using colours and words to test my memory and creativity. It was an odd experience being told to imagine walking down a road and remembering what you saw.

A routine scan in February 2017 showed the tumour had grown a little and my doctor felt that surgery was now the best option. Though I had been told that there was a chance the tumour might grow back, I was still really pleased to be having the operation. Recovery was tough over the following months as I tried to get my life back to some normality.

Later that year a routine scan showed the small amount of tumour that had been left behind after surgery was growing again and I would need chemotherapy and radiotherapy to help shrink it. Though they tell you the side effects of the treatment I don’t think you can really prepare yourself for how you are going to feel. Being in the shower and having clumps of my beautiful long hair come out in my hands came as a shock.

To gain back control, and also to feel good about myself, I chose to shave my hair off as it seemed pointless keeping  it as it was falling out anyway with the radiotherapy and I wanted to help other people and raising money for the charity Brain Tumour Research felt fitting. I also donated my hair to the Little Princess Trust, which makes wigs for children with cancer. It was quite funny looking in the mirror and watching Marc cut off the two pig-tails of hair and then shave my head.

When you are told about radiotherapy they do advise you to take it easy, as many people feel tired, sick and run-down. Though for me it was the low mood swings which were hardest to bear. I’m naturally an upbeat, happy and positive person, but after the radiotherapy I was hit with moments of utter sadness and such a negative outlook. Having Marc, my family and friends supporting me has been vital for helping me stay on track, remain positive and keep going.

Marc and I are continuing our plans to buy our first home and get a puppy and I was able to go back to work in February this year, so it’s feeling like my life is returning to some sort of normality. I don’t know what the future will hold or if I will have to have more treatment, but for now I feel lucky that I have a great support around me to face whatever comes my way. 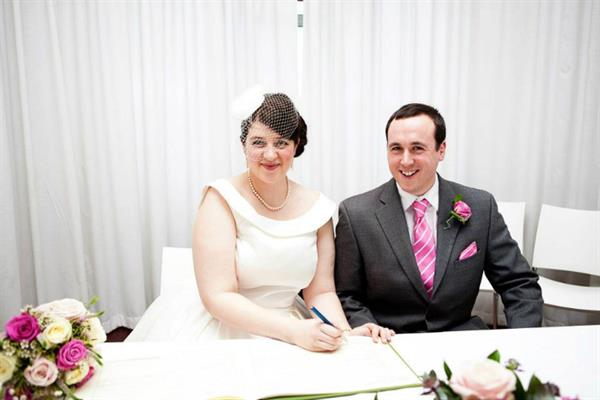