Kim McNicol’s vestibular schwannoma went undiagnosed for two years and was even missed on an MRI scan before finally being discovered in May 2021. The mum-of-two had a shunt fitted to treat hydrocephalus and underwent gamma knife surgery in July to prevent further growth of her tumour. The 57-year-old, of Dedham in Essex, now wears hearing aids after suffering a hearing loss of about 90% in her right ear, but she considers herself lucky to be alive and is now doing what she can to raise awareness of the disease and funds for Brain Tumour Research.

I was diagnosed with a brain tumour in May 2021 but my symptoms started two years before that. I was losing my hearing so decided to go to Specsavers in Ipswich for a hearing test and the audiologist there said: ‘there’s nothing wrong with your ear drums, I suggest you have an MRI scan’. I had one at Colchester Hospital in Essex, only to be told that everything was alright.

“It turned out later that this was actually a mistake and my brain tumour was present on that scan.”

Throughout lockdown, when it was really difficult to get hold of doctors, I thought I’d developed vertigo; I couldn’t walk straight and I kept shuffling my feet, so when the hospitals opened back up again, I went for a hearing test and said that I wasn’t happy and thought I had vertigo and they sent me for another scan. I was called back for an MRI with contrast two days later and that’s when I found out what was really wrong with me, that I had had a brain tumour all along. 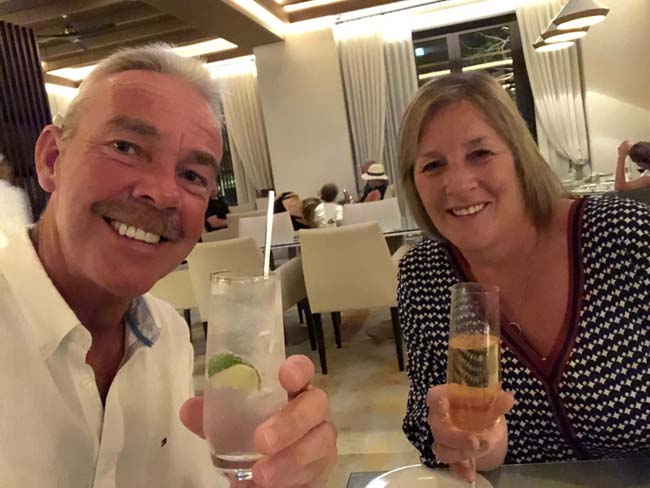 I had an inkling something was wrong when they asked me to go for another scan but I just didn’t think something like this would happen to me. That’s why it’s so important for me to do what I can to raise awareness because maybe if I’d known more, I could have pushed harder for a diagnosis. You just don’t think about having a brain tumour but every time I slept I got a headache and apparently that’s quite common so should have raised alarm bells.

“I would encourage anyone who thinks something’s amiss with their health to push until they get answers, and then to question what they’ve been told because some of my symptoms were incorrectly attributed to the menopause.” 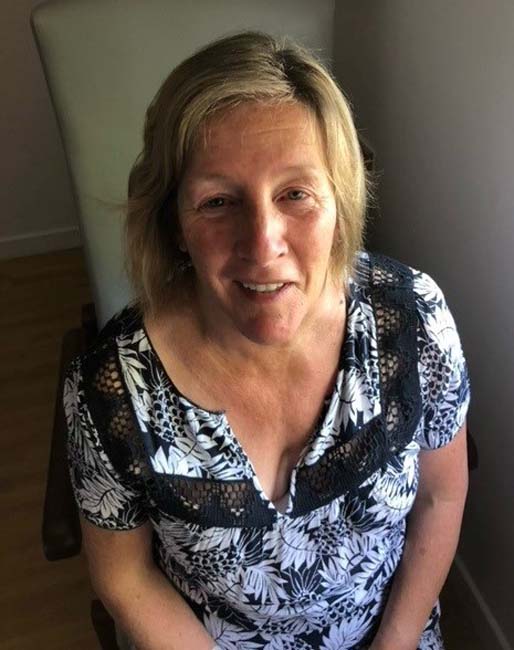 I was diagnosed with a vestibular schwannoma, which had attached itself to my hearing duct. Luckily, this type of tumour is non-cancerous so that took a bit of the sting out of it, but I still didn’t know what was going to happen because it was quite large by then, 26mm in diameter. At that point my husband, Alan, took over. He’s been absolutely brilliant and just sorted everything out for me. 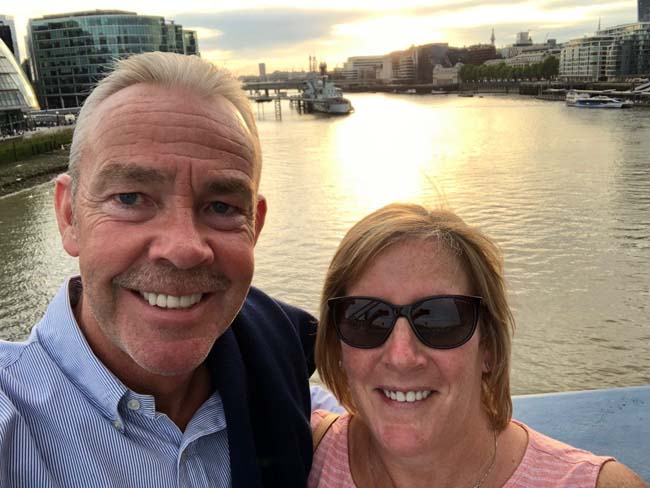 I was admitted to the London Independent Hospital in Stepney Green, East London, to have a shunt fitted in June. I had hydrocephalus, a build-up of fluid in the brain, and needed the shunt to drain it, and that has been really effective. I get a bit dizzy if I get up too quickly because it opens when I lie down and shuts when I stand up, but I know now that I have to take it easy for the first five minutes before getting out of bed. 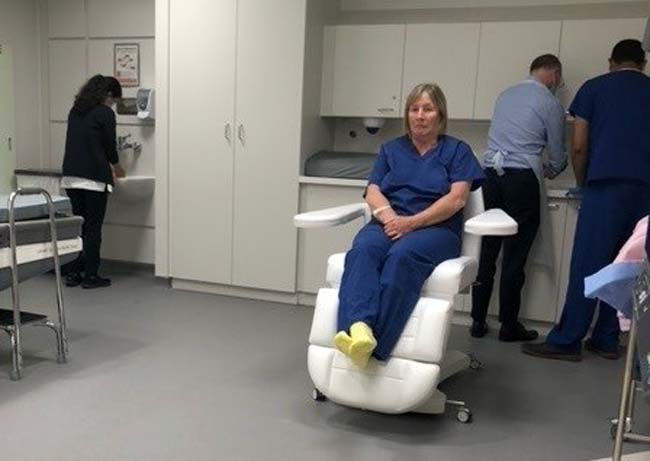 Once you’ve had any type of head surgery, you’re not allowed to drive for six months. To be honest, I wasn’t driving in the weeks leading up to my diagnosis because as soon as I turned my head, I got dizzy and didn’t feel safe, but it was horrible. I lost my independence just as we came out of lockdown, so I couldn’t go anywhere during lockdown and then I couldn’t go anywhere for six months after. I’m very lucky in that I’ve got a lovely garden and I live in a village that I can walk around but being unable to drive still took a lot of getting used to mentally. My friend, Vanessa Hymas, was incredible during this time. Alan had to go back to work soon after I was discharged from the hospital and she used to bring me food from the village bakery and was just fantastic. 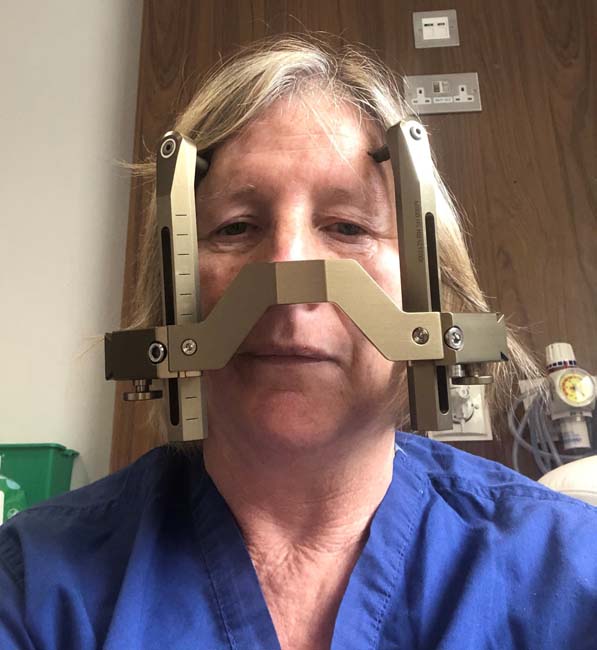 In July I had gamma knife surgery at the Wellington Hospital in North West London, in which targeted radiation was used to sever the blood vessels around the tumour to stop it from growing. I was given the choice of doing that or having my tumour taken out, but the risks involved in removing it included my face falling and I didn’t want that. The surgery itself took less than an hour but I was in hospital all day and had about 10 people around me. I was given a local anaesthetic to have a cage frame fitted to my head with pins to ensure it stayed still during surgery.

“I was really scared but, thankfully, my husband was able to come in with me and I just looked straight ahead at him and gripped my hands whilst they put all sorts of needles and the like into me.” 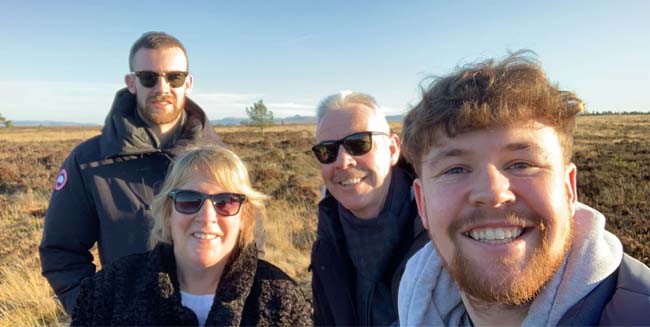 At my follow-up MRI in November, I was told I wouldn’t need another scan for nine months as everything appeared to be ok and all of the blood vessels had been successfully severed. My surgeon, Jonathan Pollock, was amazing. He explained everything so well and I knew I was in safe hands.

“I felt very lucky for the outcome; it could have been so much worse, especially after so long.” 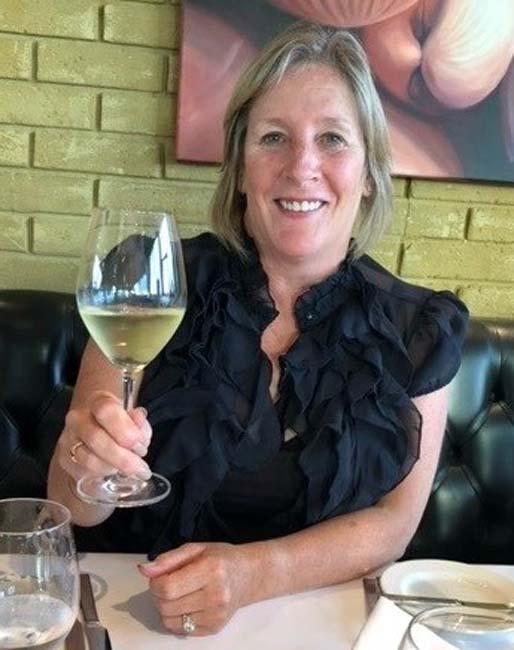 I have lost about 90% of the hearing in my right ear because of my tumour. After everything, and feeling so lucky, it is a shame to have to wear hearing aids. They do take a lot of getting used to, but if that’s my biggest problem now then so be it. I have also lost a bit of sensation in my mouth, which I’m told probably won’t come back. It’s numb along the top and bottom of my lip on the right-hand side, which is really strange because the tumour was on my left.It worries me when I eat because I can dribble, but I have to remember how lucky I am and accept that everything else is what it is.

“Now that I’m more aware of brain tumours, I’m shocked by how prevalent they are and by the lack of funding they get compared to other cancers.” 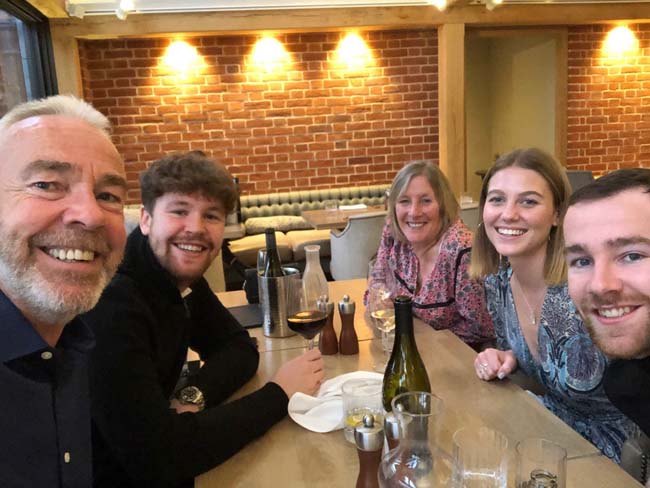 I think that, seeing as I’ve been so lucky where many others aren’t, I just feel like I want to do what I can to help, and, with that in mind, have signed up to do the Yorkshire Three Peaks in June in aid of Brain Tumour Research. It may seem like a small thing but I feel like I need to do it. I also want to give myself a bit of a challenge because life is short. Your whole attitude to life changes after something like this. I’ve been lucky and I’m still here so I want to do what I can whilst I can. I want to live life and, although I do get really tired, I’m feeling positive about the future and excited about my upcoming challenge. I’m also really grateful for the support I’ve had throughout, not just from Alan and Vanessa but from my two sons, Ross, who will be joining me with his girlfriend for the Yorkshire Three Peaks, and Callum; I can’t thank them enough. 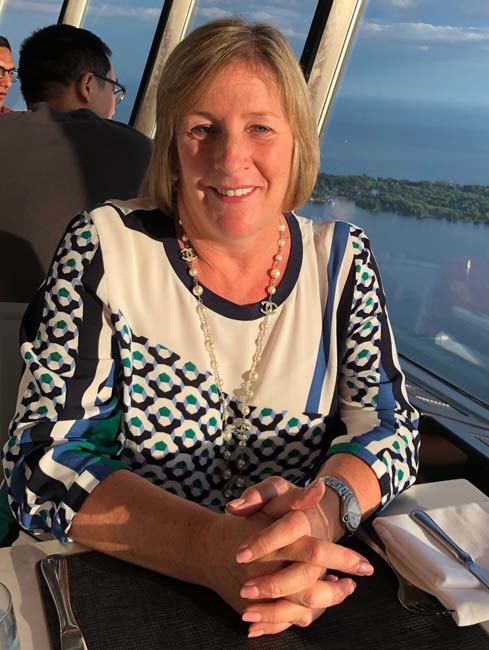