Diagnosed with Asperger’s aged nine, Kieran was 12 when he was found to have five brain tumours which were aggressive medulloblastoma after failing to recover from a suspected winter sick bug. He underwent surgery which left him with posterior fossa syndrome and underwent physiotherapy and chemotherapy. Happily, a recent MRI scan revealed he was now cancer free. Kieran has shown amazing resilience throughout his terrible ordeal helped by his incredible sense of humour and his little dog Star.

Here is Kieran’s story as told by his mother, Senga…

Kieran was always healthy and loved martial arts, football and Brazilian jiu jitsu. He also has Asperger’s, eventually diagnosed just before his 10th birthday after years of attending Child and Adolescent Mental Health Services (CAMHS), and didn’t enjoy school. When he was due to go to secondary school, an enhanced transition to Kilwinning Academy in Kilwinning, North Ayrshire, Scotland, was organised for him so that he spent half a day at the new school and half a day at St Mark’s Primary School’s nurture group in Irvine.

Soon after starting at the academy in September 2017, Kieran began complaining of a sore head, feeling nauseous and was also vomiting. We thought it was anxiety due to his autism but during the October half-term break, Kieran was particularly bad. I had already had his eyes tested and booked to have them retested, but Kieran was too ill to go.

I went backwards and forwards to the GP, often without Kieran because he was too unwell having being diagnosed with a winter vomiting bug. Eventually I managed to get the GP to come to the house because Kieran was sleeping all the time and eating maybe just three times a week.

Leading up to Christmas and New Year, Kieran was losing so much weight I just knew something was wrong. The doctor said it could be down to anxiety related to his autism, but I knew by then it was more than that.

Finally, on a Friday in January 2018, I managed to convince the GP to refer Kieran to a paediatrician, but by the very next day, he had stopped drinking and had lost so much weight that I took Kieran straight to A&E at University Hospital Crosshouse. He was admitted and put on a drip.

“Kieran remained in hospital for a week and was about to be discharged the following Friday when I challenged the doctors. How could I take my son home when I didn’t even know what was wrong with him?”

It was only then that Kieran was taken for an MRI scan and I was given the earth-shattering news that something had been found on Kieran’s brain and he was being transferred the Royal Hospital for Children in Glasgow.

Of course, I was worried, but I didn’t realise for a second how serious it was. I felt numb; it didn’t feel real. I knew what they were saying but it felt like it was happening to someone else, not Kieran. Meanwhile his dad, Graham Irvine, from whom I am separated, was distraught. 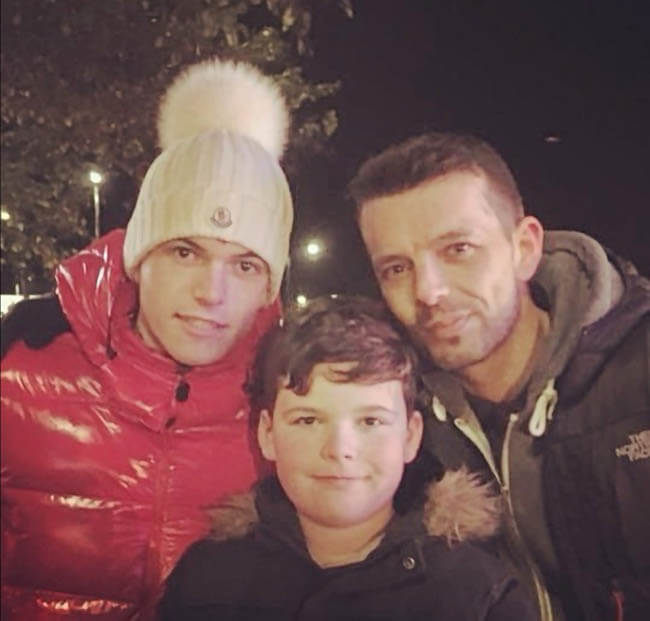 We were told that Kieran had not one, but five brain tumours. The biggest at the back of his head – a medulloblastoma – they were going to attempt to remove while the two in the front and the two in his spinal cord would be treated with chemotherapy and radiotherapy.

“Medics consulted experts in America and London about treatment options because Kieran’s case was one of the worst they’d ever seen. They couldn’t believe Kieran wasn’t doubled over in pain with such an aggressive form of medulloblastoma.”

On 2 March 2018, Kieran underwent seven hours of surgery which successfully removed the largest tumour. Amazingly he spoke almost straight away in Intensive Care (ICU), but then didn’t speak again for three months. Kieran also had weakness down his left side and facial paralysis on the same side and was diagnosed with posterior fossa syndrome (PFS) which can develop in 25% of children following surgery for medulloblastoma. It is often characterised by loss of or a reduction in speech and weakness in one side of the body. 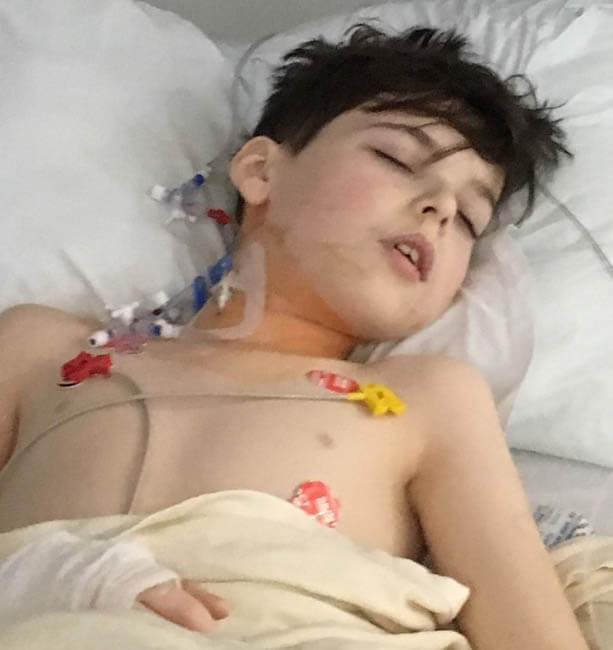 We were worried that Kieran may also have suffered some damage to his brain and wasn’t following what we were saying, but one day I was watching TV with Kieran and he suddenly wrote his cousin’s name down, so I was convinced he knew what was going on.

Following his craniotomy, doctors warned us that they would not be able to operate again and Kieran’s life would be wholly dependent on chemotherapy and radiotherapy shrinking the other four tumours. 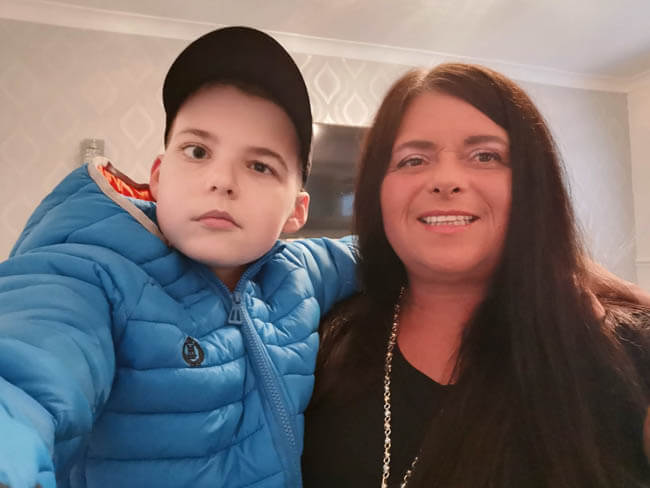 We didn’t know whether he was going to be able to walk or talk again.

I kept talking to Kieran and one day in April 2018 we were watching The Voice on TV and, out of the blue, Kieran suddenly spoke for the first time, saying: ‘I know who won The Voice.’

Kieran spent 35 weeks in hospital, having four rounds of chemotherapy, six weeks of radiotherapy and experiencing septic shock, countless blood and platelet transfusions, weeks on end in isolation taking antibiotic after antibiotic and medicine after medicine, all the while feeling constantly sick.

A scan in October 2018 revealed that one of the remaining four tumours had disappeared, meaning Kieran was left with three ‘dead’ tumours. Then in January 2019 there was real cause for celebration when an MRI scan showed Kieran was officially in remission.

We stayed in Marion House from January until November 2019, a Clic Sargent House in Govern, Glasgow, until I managed to sort a house swap, because Kieran wouldn’t be able to manage our stairs. My sister looked after my older son Darren, now 25, who has high-functioning Asperger’s. Kieran returned to Kilwinning Academy in November 2019 and is doing well after a phased return.

“I prepared his friends by putting photos of Kieran on social media as I didn’t want them to be shocked by how different he is. His mouth droops and he still relies a lot on his wheelchair to get around because he was left with one leg contracted to a 40 degree angle, either due to the amount of time he spent lying down, or because of his posterior fossa syndrome.”

Medics attempted to stretch Kieran’s leg under anaesthetic but it was unsuccessful. He is now waiting for major surgery in March 2020 to see if that can help him regain full mobility. I am worried about Kieran having to go through further surgery and yet more pain, but if it gets him walking properly again, we hope it will all be worthwhile.

Meanwhile in December 2019, Kieran chose a Shih Tzu puppy from a litter my mum’s dog had produced. Actually, the pup really chose Kieran because she kept going up to him. Kieran named her Star because of the white mark on the back of her neck. 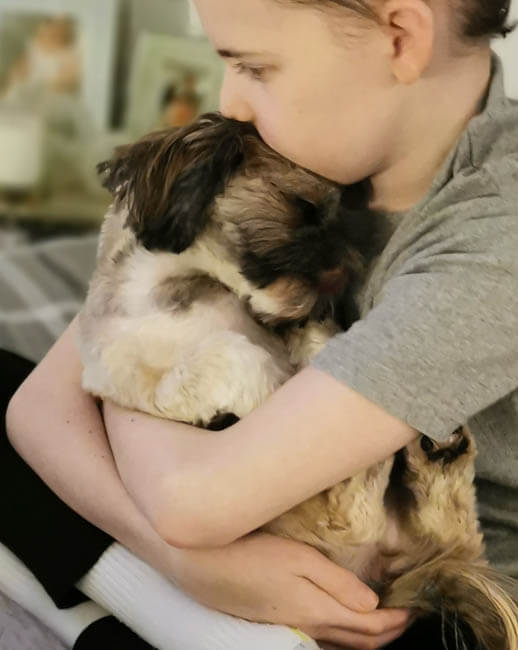 Star has been amazing for Kieran and is a great wee friend to him, giving him confidence and inspiration. One day he was feeling lost because he had misplaced his phone and the next thing we knew, Star was jumping up to the table and showing him where he had left his phone. She never wants to leave Kieran’s side and even tries to go to school with him.

Star has inspired Kieran to work on his mobility so that he can take her out for walks and even helped him make the decision to go ahead with the operation on his leg.

Until Kieran was in hospital, I didn’t realise how many children are affected by brain tumours nor how many types of brain tumour there are. I am working with Brain Tumour Research to raise awareness of how underfunded research into this devastating disease is. I want to help others as I know there are many who are not as lucky as us. We were delighted to be invited to be one of the Wear A Hat Day 2020 campaign families and have photographs taken at the Venture Photographic Studio in Glasgow.

“A brain tumour diagnosis changes your life overnight and you have to get used to the new normal. I am so proud of Kieran. He’s done so well. The doctors didn’t think he would make such a fast recovery.”

Kieran has got through all the challenges of the last few years not least through his fantastic sense of humour. He winds me up all the time, but I don’t mind. It’s great to see his personality coming back.

If you have been inspired by Kieran’s story and would like to know more about our lobbying, research updates and fundraising opportunities, please sign up to our weekly e-news. 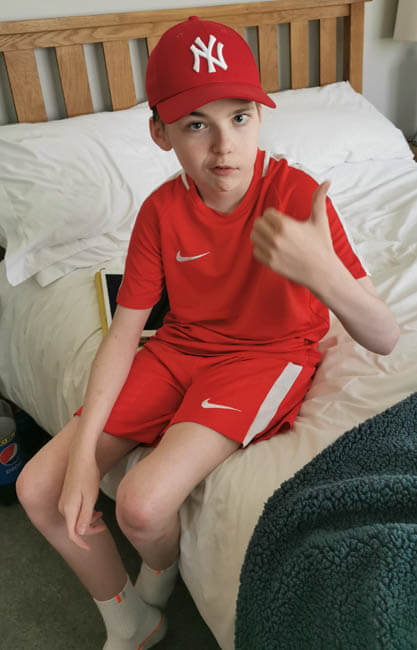