Keri Benting, a mum and keen runner from Telford in Shropshire, first noticed unusual symptoms in 2018, when she had vision problems and would experience a feeling of ‘dread’ rush over her body. Supermarket auditor Keri was initially told her symptoms were likely to be related to her job. In search of answers, she went to the optician and was asked to get in touch with her GP immediately. This led to her being diagnosed with a grade 3 anaplastic astrocytoma and within the last three years she has had two brain surgeries, 33 sessions of radiotherapy and 16 cycles of chemotherapy. Keri is now fundraising to help find a cure for the disease.

For the last 16 years I’ve travelled all over the country for work, visiting Tesco stores as part of my auditing role. I’m still doing the same role but now working from home as I’ve had to shield from coronavirus because of my diagnosis. It’s been challenging because I enjoy running outdoors and I am such an active person. I started running in 2000 when my sister passed away after a 17-year battle with Hodgkin’s disease. My daughter Abby and I began by taking part in 5k charity running events, walking the routes in memory of my sister and gradually building it up from there.

I joined a Telford running club – Wrekin Road Runners –  in 2018 and started going to Telford parkrun every weekend. During a run in the same year, I remember within the first mile I had this overwhelming sensation of dread sweep from my head to toes. I could only see directly in front of me but everything was in slow motion and for a moment, I felt like I was going to vomit. I went to the doctors because it was such a strange occurrence and had never happened before. Because I didn’t collapse, the doctors said they had no concern.

A year later I started to develop severe headaches which were triggered every time I got out of the car. It was a sudden pain at the back of my head with a heartbeat-type rhythm in each ear. Painkillers seemed to work but I’d have to make sure I took them as soon as it happened.

For weeks I went back and forth to the doctors and was told it was stress-related or because I used a tablet for my work.

The headaches were bugging me so I booked an eye test at Specsavers for 17 September in search of an answer.

‘I’m typing you a letter and I want you to take it to your GP as soon as you leave here’ –that’s what the optometrist said to me with a really serious tone.

“‘Your eye test is indicating you have a brain aneurism’, he said. I felt like I had a ticking time bomb in my head that could explode at any time.”

When I left the optician, I went to the Princess Royal Hospital in Telford and handed over the letter to the A&E team. I collapsed not long after arriving and was admitted for tests and scans. 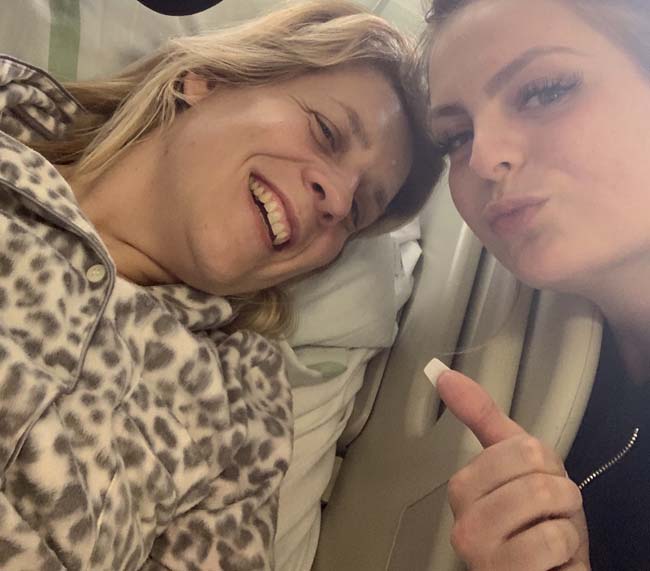 The doctors wanted to wait for my daughter and father to arrive before they delivered the shocking news that I had a 6cm tumour growing on my brain. My first reaction was to ask if it was cancerous and from the scans, I was told it didn’t present as such and I was referred to Royal Stoke University Hospital’s neuro department.

Four weeks later, on 19 October, after a month on steroids, surgeons at Royal Stoke removed 90% of the tumour. The remaining 10% had wrapped around my motor neurone nerve, so attempting to remove it would have left me paralysed. I’ve named it ‘Tommy’ the toxic tumour. 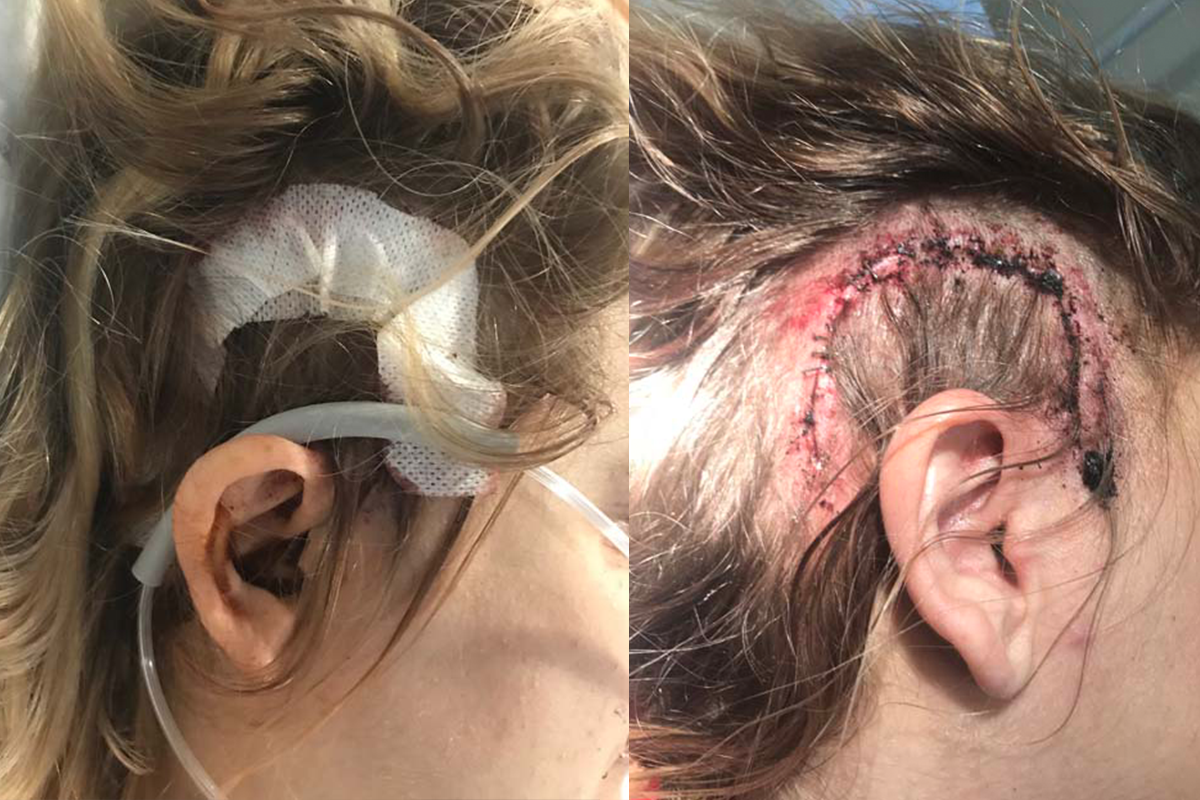 Results from a biopsy of the tumour showed it was cancerous. I had seen both my sister and mum diagnosed with and die from different types of cancer and in a way, this prepared me for what I might have to go through. After 33 sessions of radiotherapy and 16 cycles of chemotherapy tablets, I am now being scanned every three months to monitor for any changes to what is left of the tumour.

I didn’t choose the tumour or as far as I am aware, do anything to cause it, and so I feel like I am able to process everything and deal with everything as it comes. My daughter who is 24 has been my soldier and with me through all of this.

In January 2021, I had brain surgery for the second time after a scan showed two new little ‘dots’, which were caught early, so could both be fully removed and on 8 September I finished my last round of chemo. 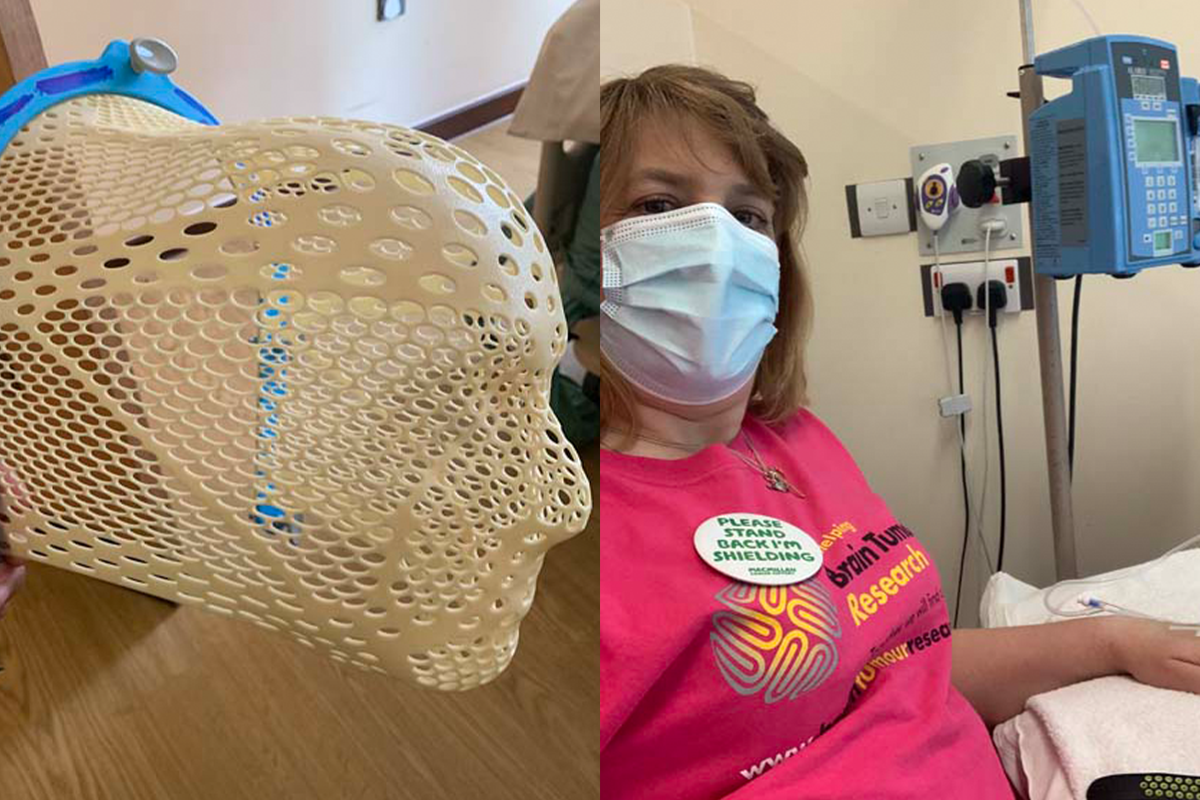 I lost hearing in my right ear from the radiotherapy which has recently returned after a referral to audiology.

In December, after shielding for two years due to the risk posed by COVID-19, I finally got to take part in my 150th parkrun. It felt lovely to be out there and it’s an achievement I am so proud of.

For me, knowledge has been key. Knowing what is happening to me and what the next move is has helped me to live with my diagnosis. What has surprised me is how many people are living with brain tumours. I’ve found a whole online community of people who are all dealing with their own diagnosis.

I feel like my fitness level before my diagnosis has definitely been something that has assisted me through the last two years. I was up to running 21 miles each week. I want to help research to find a cure for this deadly disease so I’m taking part in the 10,000 Steps A Day In February Challenge to help raise awareness, funds and to help me get back to my pre-diagnosis fitness. 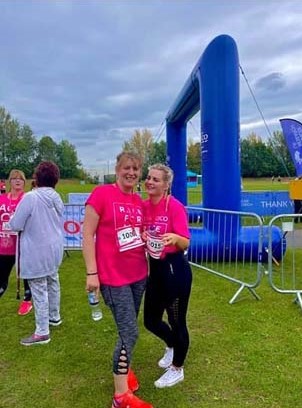